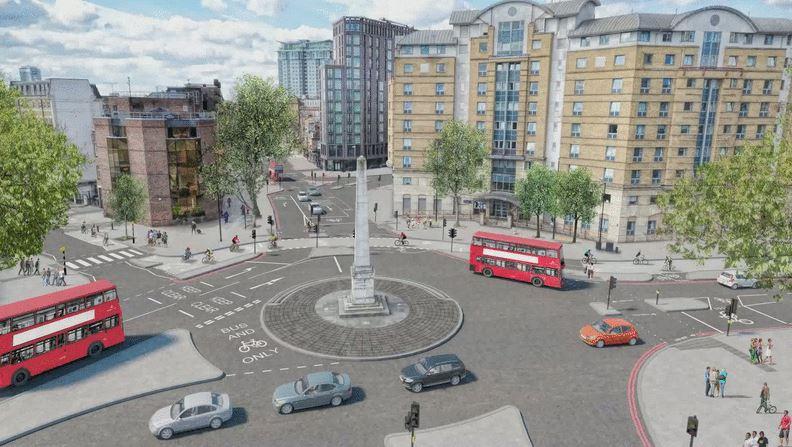 Works progressing on originally planned route despite council's belief people will use direct route instead...
by Simon_MacMichael

Southwark Council warned Transport for London that cyclists will not use a section of the forthcoming North-South Cycle Superhighway because it makes a detour that will add 350 metres to their journeys, it has emerged.

According to the news website London SE1, Mark Williams, the council’s cabinet member for regeneration, planning and transport, wrote to TfL in December to outline his concerns, with the letter only recently being made public.

He said that cyclists would be likely to ride the short distance from St George’s Circus to Elephant & Castle, the southern end of the £17.5 million route, via London Road, rather than following the Cycle Superhighway along Lambeth Road and St George’s Road. "Whilst we understand the reasons for doing this, due to the road widths, and the inability to deliver segregated facilities on London Road, the council considers that London Road is the desire line and most direct route which will be used by most cycle commuters," he wrote.

Councillor Williams added: "We have agreed with TfL to a plan and a set of measures to improve the public realm and cycling facilities along London Road and our support for the implementation of the north-south route is contingent on these measures being delivered at the same time."

Nigel Hardy, head of road space management at TfL, wrote to Councillor Williams in February, telling him: "We are investigating proposals for improvements to London Road and hope to consult on the scheme in the near future."

By then, however, TfL’s board had already approved plans for the North-South Cycle Superhighway from King’s Cross to the Elephant & Castle following a consultation exercise conducted late last year.

Construction began in March on the part of the route in question, with Mayor of London Boris Johnson visiting St George’s Circus to help get the works under way. 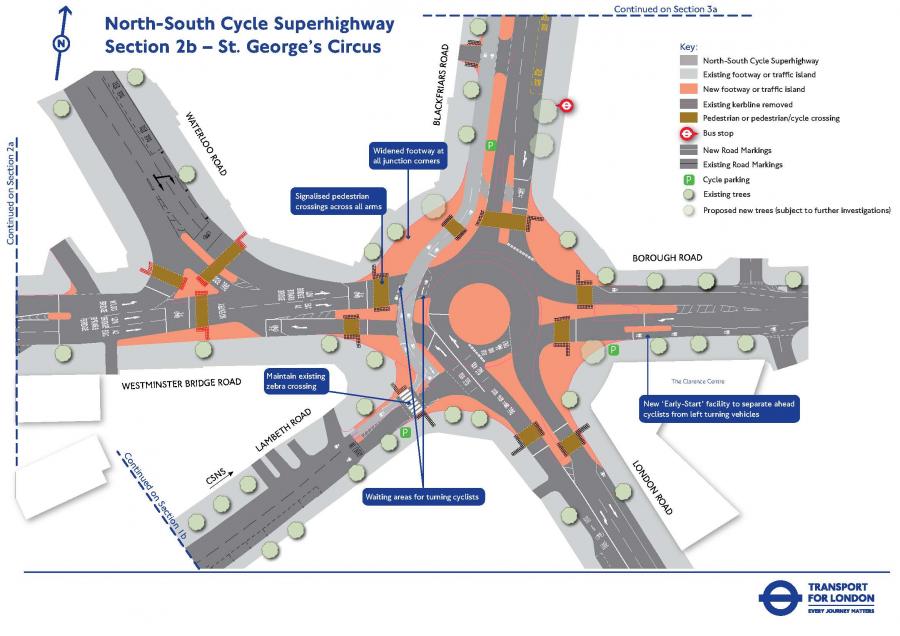 In its Response to Consultation published in January, TfL highlighted that a number of respondents including Sustrans, the Cycling Embassy of Great Britain and the inclusive cycling charity Wheels for Wellbeing, “would prefer the proposed route to use a more direct link between Elephant & Castle and St George’s Circus.”

TfL says the responses saw most of them “specifying a preference for London Road and the remainder concerned about the indirect routing, but without stating a preferred road.”

Addressing those issues in its report, TfL said:

Some respondents asked why the North-South route doesn’t use London Road rather than St George’s Road and Lambeth Road. We recognise that London Road is a more direct route for cyclists between Elephant & Castle and St George’s Circus, however, because of width constraints on London Road, it is not possible to provide a segregated cycle track along here. London Road is a very busy bus corridor with 223 buses in the morning peak hour. To provide good quality segregation on London Road would require removing either two general traffic lanes or two bus lanes.

The alignment along St George’s Road and Lambeth Road is 245m longer but equates to only an additional 15 seconds northbound and 2 seconds southbound.

St George’s Road/Lambeth Road will also be a much more pleasant environment to cycle in because of the urban realm improvements proposed and a new pedestrian crossing. In addition, the St George’s Road alignment benefits the many cyclists that pass through the Lambeth Road/St George’s Road junction who would otherwise not be catered for.

We are proposing to make some further improvements to London Road as part of a separate scheme which is due to be consulted upon in 2015.

We will ensure that these proposals tie in with both the North-South and Elephant & Castle roundabout schemes.