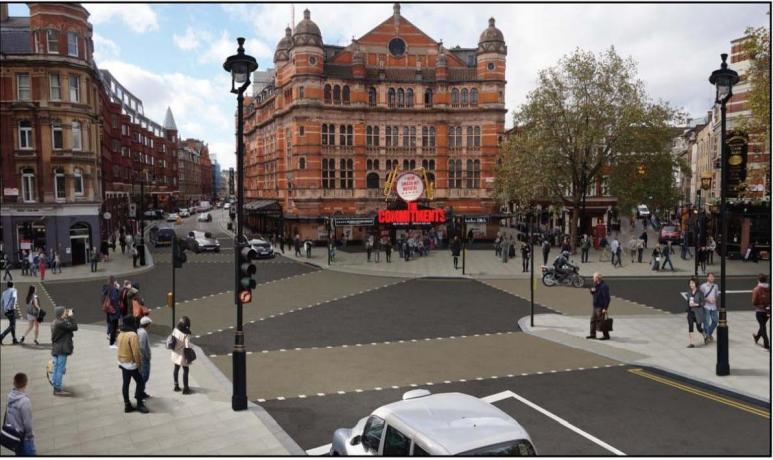 The proposed layout of Cambridge Circus

Westminster City Council faces further protests today for routing a so-called "quietway" through a major junction and banning bikes from a quiet side street on the route, forcing cyclists to zig-zag along main roads instead.

The ride, which starts at London's first segregated roundabout, Queens Circus, will end up at the busy Cambridge Circus, where Quietway 19 will run, despite mayor Boris Johnson promising in 2013 that quietways would be "slightly slower [than superhighways] but still direct on pleasant, low-traffic side streets for those wanting a more relaxed journey".

While the quietway itself will be completed after 2016, a £1.7m public realm improvement scheme for Cambridge Circus is currently under public consultation. That scheme's only cycling elements are a couple of advanced stop boxes and the banning of cycles to Moor Street, a quiet, direct street on the route. 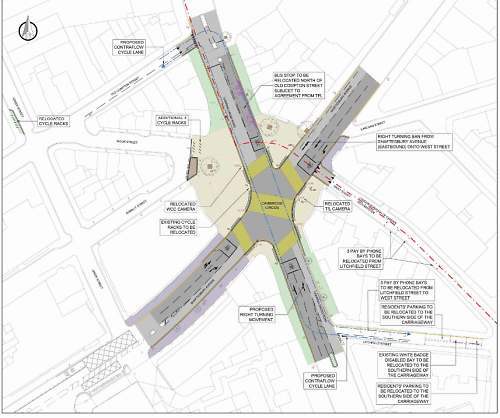 The London Cycling Campaign's (LCC) Charlie Lloyd said though the Cambridge Circus designs prepare the way for a future cycle route, the designs force cyclists on to "horrible" roads without protecting them from traffic.

He said: "[The design] is inadequate for cyclists on Charing Cross Road and Shaftesbury Avenue. We are expecting something much better when the quietway proposals come out next year.

"We don't know what we are going to see for the quietways, but we want to see much better than this. A quietway through this junction needs protected space for cycling unless they take almost all the motor traffic out."

Lloyd added when nearby nearby Tottenham Court Road improvements are complete as part of the West End Project, banning all but buses, cycles and taxis from 7am-8pm, there will be much less motor traffic on Charing Cross Road, but parts of it will still be "horrible".

Cambridge Circus, on the edge of theatreland linking with Piccadilly Circus and Trafalgar Square, has been described by Westminster Cyclists, a branch of the LCC, as "a hole in the cycle network". Tonight's Circus to Circus ride will give campaigners the opportunity to discuss this and other plans for cycling in the borough. 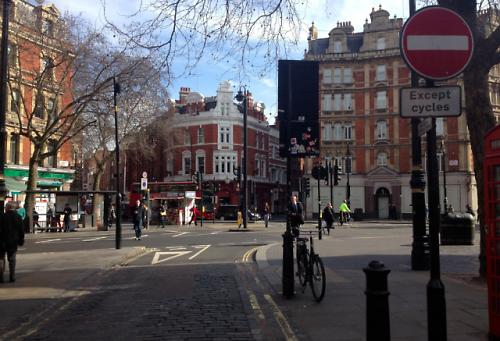 Moor Street (pictured above and below) runs straight between two sections of the proposed quietway route. Currently one-way for motor traffic, and two-way for cycling, it will be blocked off by cycle racks under public realm improvement plans (marked as back space lines on the below diagram). If banned from using it cyclists would have to zig zag along Charing Cross Road and Shaftesbury Avenue. 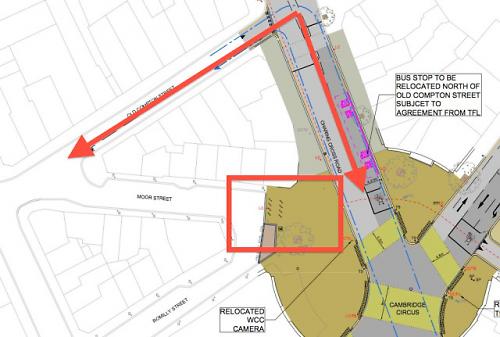 Blogger Mark Treasure, chairman of GB Cycle Embassy called the bike stands a "futile" attempt to stop people cycling here. He said: "Rather than closing this road completely, it could of course be turned into an appropriately designed cycle-only cut through, with little detriment to the public space."

"I cannot see this Quietway route being the least bit attractive for anyone, given that no substantive changes are proposed to the actual junction at Cambridge Circus," he said.

Riders, he said, would be dumped on to Charing Cross Road from a quiet side street, Litchfield Street. "There is an ASL there but good luck reaching it (and I would probably advise you not even attempting to do so)."

Westminster City Council came under fire last month for mind-boggling road casualty figures following the death of a woman killed while cycling on a junction where it had earlier rejected cycling improvements.

On its information leaflet Westminster City Council says the chosen Cambridge Circus design was one of two options, this being the one presenting fewer "operational issues".

"Option 2 presents fewer operational issues and enables the provision of additional footway space at the junction."
The £1.7m junction redesign is part of the council's "Better City, Better Lives, 'A safer, healthier city'" plan designed to "improve the safety of the junction for all highway users".

There will be wider pedestrian crossings, and the footway will be repaved, with improved public lighting and drainage. Current Cambridge Circus layout, with Moor Street to the right of the theatre

Westminster City Council has not responded to requests for comment.