Loads to see this week including an mad snow bike concept, a new aero helmet and Alberto Contador's Vuelta winning bike goes for €15,000 at auction
by David Arthur @davearthur

The latest roundup of new cycling products from the past seven days, this week featuring a new aero helmet, a custom painted bike for Cancellara while Contador's race bike goes for big money at charity auction, plus indicating gloves, a cool snow bike concept, and some other bits and bobs.

Fabian Cancellara has received a new custom painted Trek team bike for the 2015 season. He’s been racing the last couple of seasons on a custom painted Domane in a black colour scheme with some special motifs and graphics. This season he sticks with the Domane, despite the introduction of the newer and lighter Emonda, but reverses the paint job for a slick white bike. Should go well with the new team kit, which features a lot more white than last year. The specification of his 2015 race bike appears identical to the one he has been racing the past few seasons, with the same Shimano Dura-Ace mechanical groupset and Bontrager parts. Notice the new Bontrager wheel decals too.

Remember the Vuelta a España winning Specialized Tarmac belonging to Alberto Contador that was being auctioned off for charity a couple of weeks ago? Well news reaches us that after some fevered bidding, the bike finally reached a staggering €15,000. The bike was won by  Steven Bennett, who couldn't resist this unique opportunity to own the bike of one of the world's best riders while contributing to such a worthy cause, according to the press release.

“During the 1980’s & 1990’s I spent many summer holidays cycling through Europe & further afield, often on an early Specialized Stumpjumper, very happy days,” says Steve. “Retirement next year will be a great opportunity to rediscover the iconic climbs and beautiful scenery and rather fitting that it will be once again on-board a Specialized machine, this time the unique Alberto Contador S-Works Tarmac. An incredible incentive to improve my fitness and health. A huge thank you to Tinkoff-Saxo and Specialized.”

Now, will he ride it, or hang it on the wall? What would you do with it?

What’s that? A new aero helmet from Bontrager? That’s certainly what it looks like. Aerodynamically designed helmets have been all the rage in recent years, no self respecting helmet manufacturer can be without one in their line-up of helmets these days.

We don’t know much about this new Bontrager aero helmet, so there’s not much we can really tell you at this stage. It does look a little like Specialized’s Prevail aero helmet, with a long rounded shape and several ventilation ports dotted around the front, and large rear exhaust ports.

ICGlove reckon its indicating gloves will boost cyclists visibility at junctions thanks to these gloves with  LED light integrated into the top of the hand. The lights don’t add much weight, claimed weight of 65g per glove, and are waterproof, and provide 30 days battery life. 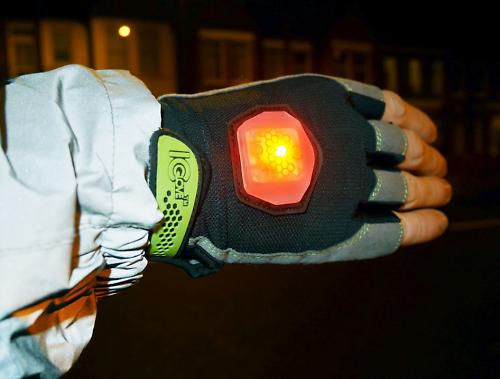 The lights use sensors to automatically illuminate when the cyclist raises an arm in the air to  they have a 20 second shutdown timer.The company will be exhibiting at the London Bike Show next week if you fancy a closer look.

With all the snow that some parts of the country have been laid under in the past few days, you could be forgiven for turning to the turbo trainer rather than heading out on the road bike in such conditions. Help is at hand though, with the quite brilliant sno bike concept revealed on designboom.com this week. 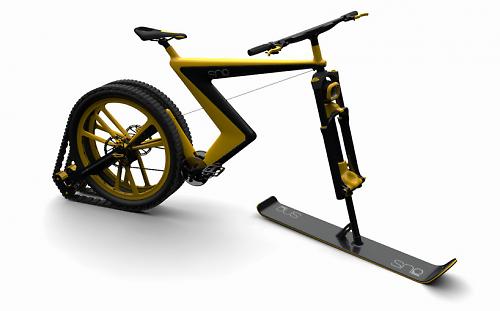 The sno bike is unfortunately just a concept at this stage, but we’d love to see it go into production, just so we can have a go on it. Looks a lot of fun. It’s sort of a modified mountain bike, with the front wheel replaced by a wide ski, with a suspension fork to soak up the bumps, and two rear wheels driving the rear track for traction on the slippery stuff. No excuse for a snow day if you have one of these in your garage.

Ever wanted a road bike with a paint job inspired by the iconic New York City yellow cabs? No, neither have we. But if you did, then German company Bellitanner have produced the Bellitanner NYC Cab bike, which they claim addresses the usual bad finish with urban bikes with this bold colour. We can't see past the madly angled frame tubes though. Just what is going on with the down tube? And the seat tube? “Most urban bikes look cool but very often they are badly finished, too heavy and too uncomfortable,” founder and managing director  I want to change that with Bellitanner. We are offering urban bikes with great design and top quality. They are ideal for modern city dwellers.”

The NYC Cab will cost €1,490 with a host of Bellitanner branded components, including the wheels, cranks and handlebars. The tyres are Continental and the headset comes from Ritchey. No idea how much the pictured bike would cost with its expensive AX Lightness carbon wheels and post, stem and handlebar. Lots, we'd imagine.

They’ll be offering an e-Bike version in the spring, with a 250 watt motor manufactured by Italian company ZeHus. It’ll boast Bluetooth compatibility with a smartphone app.

Pedibal is a British company launching a range of balance bikes designed for children aged between 18 months and 12 years. It has two models, the Scampa aimed at the younger children, and the Sprinter for older children. Both bikes are lightweight and made from aluminium tubes designed to keep the centre of gravity low. Apparently they’re capable of providing balance at just 2mph. The bike features ‘Kick Lock’ foot pads so a child can ride the balance bike like a scooter when seated. A neat feature is the ability to convert the bike into a pedalling bike, with the fitment of a chainset.

They’ll be launching at the London Bike Show next week where you’ll be able to get a closer look. The Scampa costs £130 and the Sprinter is £150.  www.pedibal.com