The Specialized S-Works Tarmac ridden by Alberto Contador to victory in last year’s Vuelta a España has been put up for auction this morning. Bidding starts at €3,000 and all proceeds will go to the non-profit Matonyok Parents Trust Orphanage that the Tinkoff-Saxo team visited during their team-building expedition to Kilimanjaro last November.

It’s not often the bikes ridden to such a notable race success are ever made available to the public. Normally they straight go into a museum, or the bike manufacturer adds it to its own collection. Occasionally they end up on eBay, as Chris Froome's 2012 Tour de France bike did last year.

The Specialized bike up for auction today was ridden by Contador through the Vuelta a España, during which he won two stages (16 and 20) on his way to the overall classification. It represented the first big win for Specialized’s new Tarmac, a bike which Contador was involved in the development of. 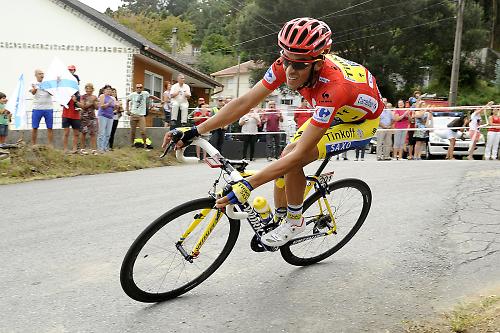 The bike is a size 54cm and is kitted out with a SRAM Red 22 groupset, Roval Rapide 40 wheels with Specialized Turbo tubular tyres, and Zipp finishing kit. Here’s the complete spec:

The auction is only running until 20:00 CET on Sunday, February 1st, 2015, which doesn’t leave you a lot of time to get a bid in, so best hurry if you fancy getting your hands on a slice of history. The auction is currently at €7,200 at the time of writing this, but we expect it to head north of that figure quite a bit over the following days.

The Foundation for Tomorrow helps dozens of orphaned and vulnerable children in Tanzania. The funds from the auction will be destined to the Matonyok orphanage in the city of Arusha.