With devastating tenacity Fabian Cancellara rode this Trek Domane to a magnificent victory in this year's E3 Harelbeke. He attacked with 35km to go, in a fashion that has seen him win races in the past, built up a good gap over the chasers, including Peter Sagan (who made up for it by winning today's Gent - Wevelgem), and soloed to the finish line. Vintage Cancellara.

The bike will have played a small part in his victory, for the Domane was designed for roads like those found in today's race, complete with cobbled sections - many of which will feature in the Tour of Flanders next weekend - frequent in this corner of Belgium. Fabian Cancellara was instrumental in the testing of Trek’s Domane ahead of its launch last year, when he raced a prototype at the Strade Bianchi.

This is no ordinary Domane of course, and differs from the stock Radioshock team edition (pictured at the bottom of this article). Trek have a good tradition of supplying customised bikes to their star riders, and Spartacus, as he is known as, has received some stunning bikes over the years. This year’s edition is more understated than we’ve seen the past, with a matte finish looking sleek. The top tube is a bit overly saturated with sponsors logos, but they’re at least opaque.

The best bit is the Spartacus helmet adorning the head tube, a nod to his nickname. Very nice. 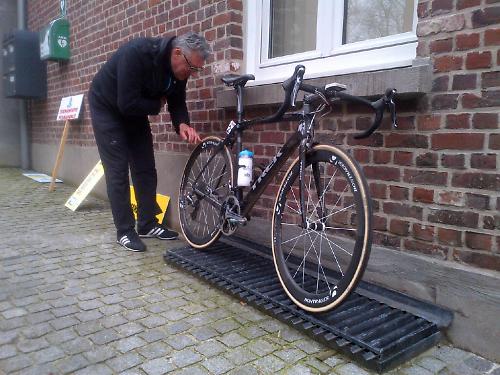 Underneath the custom finish is Trek’s top-end Domane 6.9. It features Trek’s unique IsoSpeed, a bump absorbing decoupler at the seat tube/top tube junction. It provides a small degree of horizontal seat tube movement to help smother the impacts of smashing over cobbles, the idea being to leave the rider, in this case Cancellara, feeling fresher at the end of the race when the clock is ticking. It certainly paid off today.

His frame is dressed with Shimano’s new 11-speed Dura-Ace mechanical groupset. It’s rumoured that Fabian isn’t a fan of electronic groupsets, instead preferring the feel of mechanical.

Most pro riders, it seems, prefers their handlebars with a traditional bend. This photo shows that he’s instead opted for a Bontrager Anatomic bar with a compact drop, anatomic middle section and extended ends. A 14cm stem slammed onto the headset secures the bars in place. 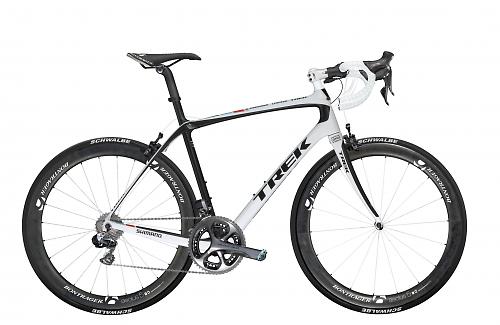 Wheels are Bontrager’s Aeolus 5’s. They’re the deeper-section version of the wheels Mat tested last year, and both use the newer fatter rounded rim profile that is more aero than V-shaped rims of previous years

As for the tyres, Radioshack are sponsored by Schwalbe, but these clearly aren’t the German tyre company’s treads. They’re more likely to be French firm FMB’s Paris-Roubaix, a 25mm tubular, that is favoured by many of the riders. FMB don’t sponsor these teams, they go to FMB and buy them.

Fabian has long time been a Speedplay pedal user, and the saddle doesn’t look like anything in Bontrager’s current range, as far as I can tell.

2012 started off full of promise for Cancellara, he won the Strade Bianche on his new Domane at the start of March and it seemed like he was going to be the man to beat once again for the classics, but a resurgent Tom Boonen and then a crash in the feedzone at Paris Roubaix conspired to frustrate him. After a rapid recovery from the badly broken collarbone he suffered in that crash Cancellara won the Tour prologue only to crash again during the Olympic road race - his main target for the season. In this video, Spartacus Rising, Cancellara looks back on a season to forget and forward to 2013, he's got a point to prove and he started doing that at E3 Harelbeke.