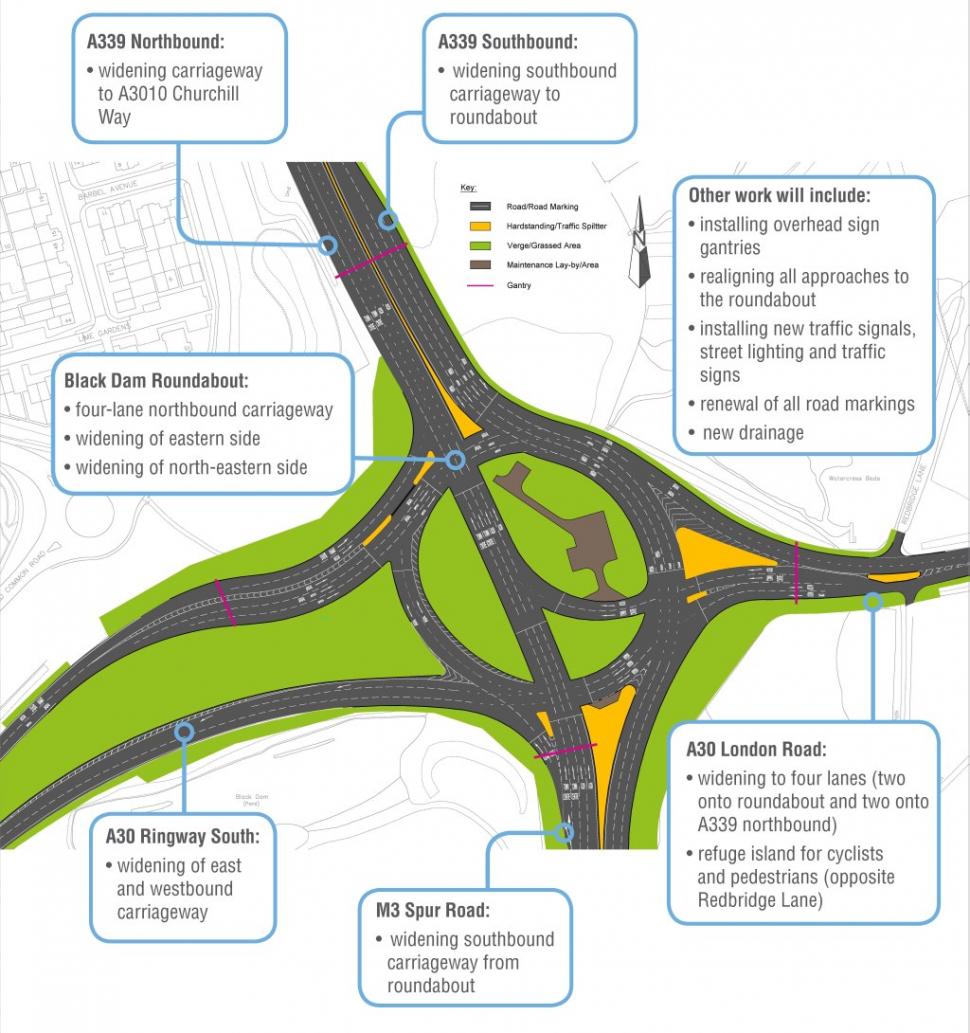 A ten million pound redesign of a major roundabout in Basingstoke will not include any cyclist provision, as the junction is only considered safe for motorised vehicles.

Basingstoke is often nicknamed "Doughnut City" or "Roundabout City" because of the number of large roundabouts.

The Black Dam roundabout, which links the M3. A30 and A339 is extremely busy, and according to Pedaller, the Mayor of Basingstoke & Deane Borough Council for 2014/15 Cllr Roger Gardiner said: “It would be preferable for cyclists to to avoid this very heavily trafficked intersection.”

Construction work has already begun to widen the junction to four and five lanes across.

It’s a view echoed by the MP for Basingstoke Maria Miller, who told Parliament: “because the pre-existing road layout made cycling difficult, few cyclists regularly choose to use that junction.”

The Mayor added that he would be raising the safety concerns, saying: “While I would like to think [that] the Highway Authority and Hampshire County Council would not be so irresponsible as to introduce an unsafe highway, this is a busy junction and its suitability for cyclists and pedestrians is questionable.

An underpass beneath the M3 is available for cyclists but locals say it is not clearly signposted, and forcing cyclists to use it by creating an unsafe junction goes against the aims of government to make cycling infrastructure better.

In the Department for Transport’s‘Manual for Streets‘ it is written that: “Streets should not be designed just to accommodate the movement of motor vehicles.

“It is important that designers place a high priority on meeting the needs of pedestrians, cyclists, and public transport users, so that growth in these modes of travel is encouraged.”

The Local Transport Note on Cycle Infrastructure Design adds that: “The underpinning principle is that measures for pedestrians and cyclists should offer positive provision that reduces delay or diversion and improves safety.”

In 2013 we reported how Maria Miller, then Culture secretary, launching plans to get a further 1 million women cycling by 2020.

The MP and British Cycling pledged to continue campaigning for safer roads, with perceived danger a major barrier to cycling for many women, and also aims to make it easier for women to take up cycling as a sport.

Ms Miller said: “Cycling in Britain is in great shape after a fantastic London 2012, and it is fantastic that the sport wants to go further and get more women on their bikes.”