Last month Giant revealed their new Defy, which has been redesigned with disc brakes on all the carbon models. I was at the launch and spent two days riding the bike around the beautiful roads of Pitlochry, Scotland to find out if this successor to an already very popular bike is a worthy replacement.

The Defy is really comfortable

Not only has the new Defy undergone a huge disc brake redesign, but the frame has been engineered to offer more comfort than the old bike. The biggest change is the new D-Fuse integrated seatmast, a d-shaped tube, slender in profile, is claimed to offer in the region of 11mm of deflection. Not only that, but the seatstays are as skinny as they can be and still be hollow, made easier with the absence of the brake calipers, and the top tube shares the same profile as the seatmast. 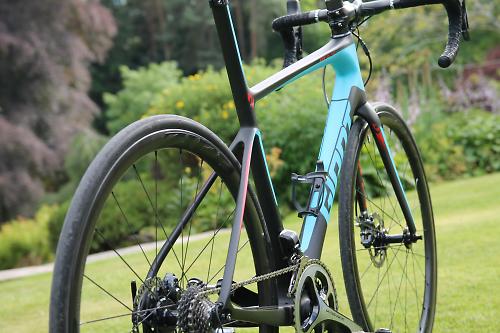 These changes all add up to create a hugely comfortable bike. There’s enough deflection to take care of the bigger impacts, say clipping the edge of a pothole or riding into a sunken manhole cover. Smaller stuff, rippled and corrugated tarmac, is taken care of impressively well. But it’s really the bigger impacts the Defy most noticeably filters out, yet it’s not soft and floppy - there is still a high level of stiffness in the frame and fork so it feels taut and precise.

The Defy is rip-roaring fun to ride. The two rides we were treated to, 85 and 105km, were ticked off at an average speed of about 20mph. And that was with plenty of decent climbs too. 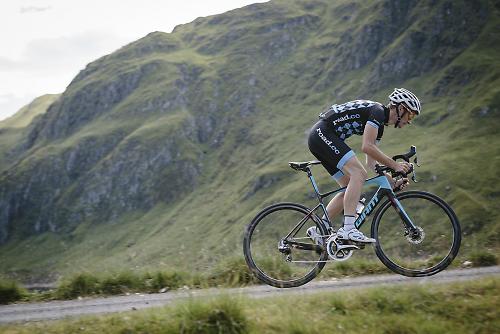 Finding myself in a chain gang with three others on an undulating circular route around one of the many lochs, the Defy proved that it can provide the sort of speed, handling and performance you’d expect from a thoroughbred race bike, and that really surprised me. I wasn’t expecting to feel so comfortable on the bike in such a situation. The only sense that you’re not on a race bike is the handling is occasionally a bit more measured, and there are less vibrations coming through the contact points.

Giant have given the Defy a huge section down tube and a tapered head tube with their OverDrive 1 1/4in top bearing size, topped with a huge sprinter-friendly carbon stem. Down below there’s a press-fit 86mm wide bottom bracket shell. That all means that power transfer is ample to deliver high speeds and swift acceleration. It’s all very stiff when you push hard on the pedals, and when you lean on the handlebars there’s no hint of twist or flex along the length of the frame. 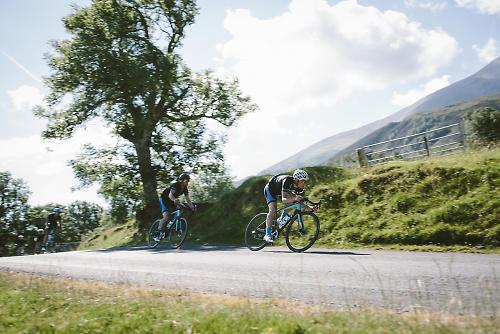 I found myself comparing the Defy not to other endurance road bikes, but to full-on race bikes. There’s very little compromise in the Defy’s delivery of performance. If you’re going to compare it to endurance bikes, then the Bianchi Infinito CV is the first that springs to mind. There’s a similarity of handling and willingness to ride very fast, but the Infinito CV might just have the edge on pure comfort. We'd need to get both bikes in for a back-to-back comparison test to answer that one for certain.

The geometry still makes the bike

The one thing Giant didn’t change about the new Defy is the geometry: it’s identical to that of the old bike.

That’s a good thing, because it's the geometry that is arguably what made the bike such a hit with cyclists. While every other aspect of the bike has transformed almost beyond recognition, in retaining the geometry, Giant have kept the classic handling. If you’re a previous Defy owner, you’ll feel right at home, and if you’re sizing up the Defy, you’ll be interested to know that the Defy offers superb handling.

What I like most about it is how it feels almost docile when riding along in a straight line. It feels a bit ponderous. Small steering corrections don’t translate into sudden movements around the road. Seize the handlebars tightly and thrust it around the road, through a corner or chase down a friend who has attacked over the crest of a hill, and the Defy wakens from its slumber. It comes alive, and all of a sudden it feels sprightly and energetic.

Of course the top-end componentry on the test bike positively influence the ride (Zipp 202 wheels and Giant’s colossal carbon-fibre stem) so it’ll be interesting to test one of the lower specced bikes to see how much impact they make on the performance.

Spec aside, the Defy is an easy and comfortable bike to ride whether you're admiring the views or riding on the rivet.

Disc brakes are a good thing on road bikes

Yes, really, they are. I know there are a lot of haters, but when you’ve ridden Shimano’s most excellent R785 for a decent length of time, taking in a full range of riding conditions, road surfaces and weather, it is very easy to be won over by them. You might just find it hard to go back to regular caliper brakes. 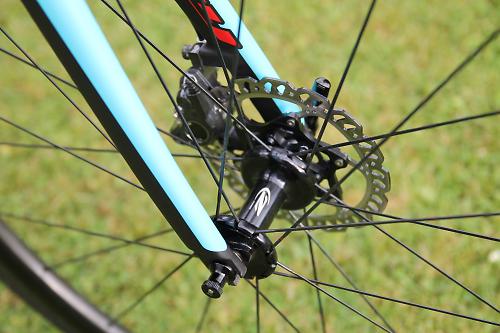 It’s not about the power, which is certainly a lot more than regular brake, but about the control they offer. There were a couple of good fast descents spiced up with some hairpin turns and fast open curves on the test loops that we took the Defy on, and the disc brakes simply provided a superior level of control in these situations.

Because I was able to control my speed more easily, I felt safer and more confident. Whether it’s adjusting the speed to get the entry into a corner just right, or scrubbing of a load of speed for a 180 degree hairpin bend. Or feathering the brakes to check your speed when riding in a tight paceline. The disc brakes just offer better control, and without any issues of a lack of traction as is often cited by the luddites detractors. 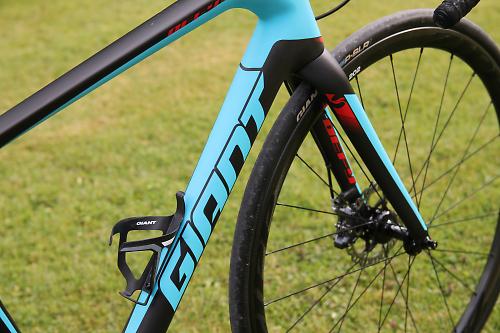 The same lever pull nets a huge increase in power, so you can comfortably use a single finger the entire time, even when hauling on the brakes for a rapidly approaching T-junction. You know those scary moments when you’ve got three fingers on the brakes levers and your caliper brakes aren’t really slowing you down as quickly as you would like? If anything you're still accelerating. Well, you don’t get any of those situations with these R785 disc brakes.

Shimano recommend their IceTech rotors - they would, of course - but they’re only available with their own Centrelock fitting. Few wheel manufacturers have adopted this standard, so Giant used a pair of 140m TRP rotors with a 6-bolt mount on the Zipp wheels.

While I didn’t ride down Mount Etna like Dave did at the Shimano disc brake launch, on the reasonably long and steep descents I did take them down, the brakes performed just fine. No hint of fade or the rotors struggling to cope with the heat.

Scotland is a really beautiful place

Giant chose Pitlochry not because it’s a bit tricky to get to but because 1) it’s absolutely stunningly beautiful and 2) the available roads are the perfect place to show off the capabilities of the new bike.

Loads of real rollercoaster roads with lots of crests and sharp inclines to test the legs. There were fast descents with wide open sweeping bends, steeper downhills into tree covered tight hairpins. There were brutal climbs too: Ben Lawyers South Climb on day one is a tough nut that starts off with sections as steep as 15%, before relaxing to a steady 8-12% for the remainder. Few breathing spots until the summit was crested at Lochan na Lairige. 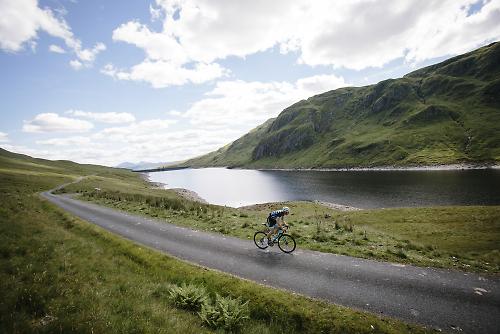 And all this set against a really pretty backdrop. You’re out in the wilderness most of the time, you really feel like you’re a long way from civilisation at times which is just incredible. But there are good villages on the route with tea shops that will serve you huge slabs of cake and mugs of coffee to fuel your for the rest of the ride.

You could very easily make a good argument that these are the best cycling roads in the UK. We stayed in Aberfeldy, a small village close to Loch Tay that provide the basis for the first circular route. It’s a good base for exploring the local roads and you’re straight into quiet country roads. I really recommend it. 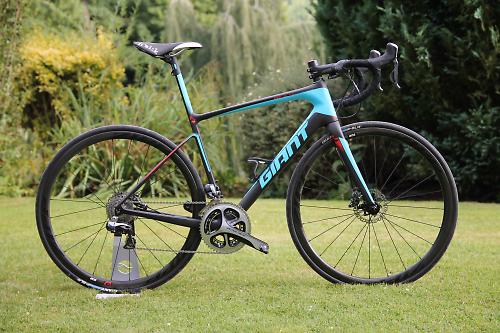 They'll also be offering the Defy Advanced which drops the integrated seatmast for a D-Fuse seatpost and features a Shimano Ultegra mechanical groupset with TRP Spyre disc brakes. Plus there are aluminium models that switch the disc brakes for conventional caliper brakes.