Canyon launched the new Aeroad just before the start of the Tour de France and we had the opportunity to have a close look at Kristoff’s new race bike. The Aeroad, an update of the previous model, was first spotted a few weeks before the Tour when the Katusha team posted a photo to their Facebook page. Which was nice of them. We’ll look at the features of the new Aeroad in a minute, but first a few words about Kristoff’s build. The team are sponsored by Shimano so that means the latest Dura-Ace Di2 11-speed groupset, with an SRM Powermeter to measure his power output. He also uses Shimano SPD-SL pedals too. Like most of the team bikes we’ve seen up close, he rides a 53/39 chainset with an 11-28 cassette. 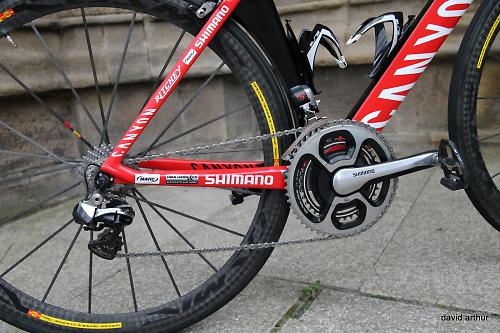 Katusha use Mavic wheels, these labelled up with ‘Special Service Course’ but they’re clearly the current Cosmic Carbone Ultimate tubular wheels, a 40mm rim with a claimed 1,185g weight. Bascially a tubular version of the Cosmic Carbon 40 wheels we tested last year. Tyres are branded up as Mavic’s own Yksion Griplink tubulars but they don’t look like them to us, we wouldn’t be surprised if they were manufactured by Vittoria. Kristoff sits on a Selle Italia SLR saddle, atop the proprietary seatpost fitted to the Aeroad. A pair of plastic Elite cages completes his bike. 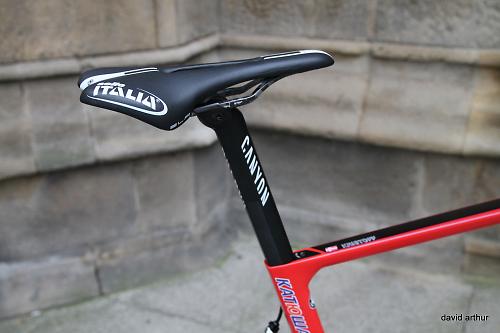 More aero, lighter and stiffer than the old Aeroad

Essentially the tube profile is wider at the at the rear and a bit shorter than that used on the Speedmax. This is to improve the aerodynamic performance at the lower speeds, and greater angle of crosswinds, involved in road racing compared to the high speeds of a time trial. 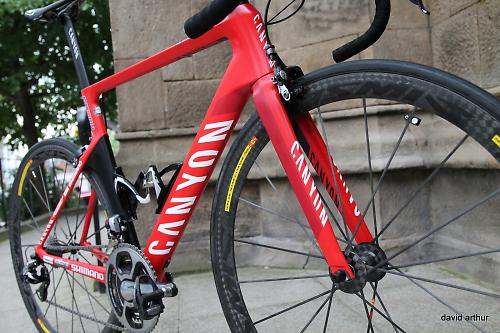 The Trident tube profile, used in the down tube, upper seat tube and seatpost, also nets a stiffness increase, an area the Canyon designers have worked hard to improve upon the older Aeroad model. They've also moved to a tapered headset with a large 1 1/4in top bearing, just like the Ultimate CF SLX, to improve front-end stiffness. However, reducing the frontal surface area was also important, so they asked bearing supplier Acros to make specially narrow bearings so they head tube can be as narrow as it’s possible to get away with. 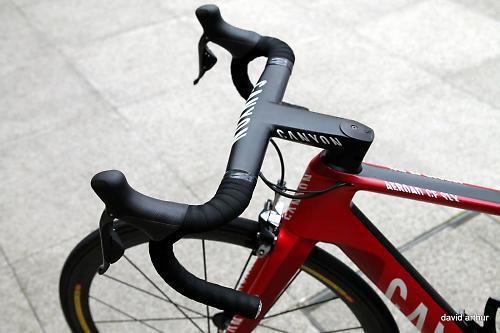 The most striking part of the bike is the new Aerocockpit CF integrated handlebar. We’ve seen a lot of integrated bars in the pro peloton at this year’s Tour de France,  they’re clearly popular with the fast guys. Canyon say the aerodynamic gains were simply too good not to use this design of handlebar on the new bike. 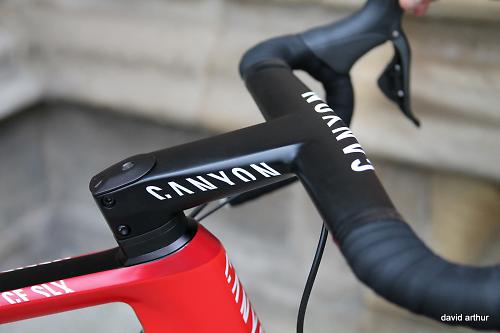 They’re also pushing riders to use narrower handlebars, as they say their wind tunnel testing showed that simply bringing the arms and shoulders in closer together resulted in aero benefits. 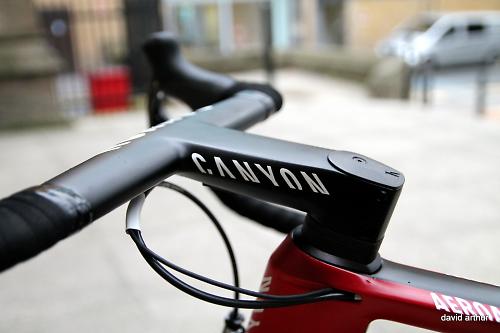 It’s a sleek assembly. The gear and brake cables are neatly routed inside the handlebar and enter into the top tube, minimising the amount of exposed cable. The underside of the stem has a small recess where the Shimano Di2 or Campagnolo EPS junction box can be fitted, keeping it out of the airflow. 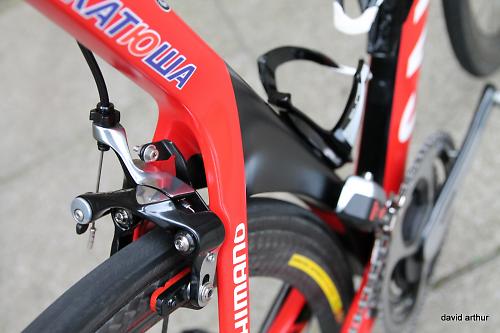 Canyon have moved to Shimano direct mount brake calipers. Uniquely, they’ve used the front brake on the seat stays too (Shimano’s direct mount brake calipers are front and rear-specific) and switched the brake blocks around. They've reckon the seat stay position caliper is more aerodynamic than a chainstay mounted brake. It's also safer for team mechanics to adjust when hanging out the window of a team car. 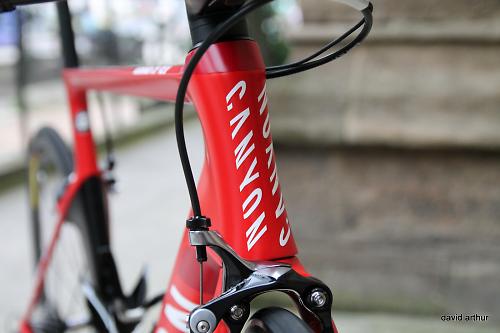 All of these aerodynamic and stiffness gains have been achieved whilst dropping the frame weight. Canyon claim the frame weighs just 960g, which is good for an aero frame. We certainly can't wait to swing a leg of the new Aeroad when it is available later this summer. It sure looks fast and has proven itself on the Tour. We'll have a more detailed look at the new Aeroad, including a chat with the design and engineering team, in a future article.