7
10
Excellent durability & stiffness and top-notch braking but not light and quite pricey
Weight:
1,569g
Contact:
www.mavic.com

Surprisingly, the Cosmic Carbon 40 Cs are Mavic's first ever carbon fibre clincher wheels. They're fast and stiff, with dependable braking performance, but the high price is hard to digest and they're not especially light.

There's a huge appetite for carbon clinchers these days; people want the looks and speed of carbon deep-section wheels, but with the convenience of clincher tyres.

The biggest issue though with carbon clincher wheels, and all carbon wheels for that matter, is heat generated when braking. Drag the brakes long and hard enough, and you'll soon heat up the carbon and resin mix to the point that they could fail. And that doesn't tend to happen without fairly catastrophic results. 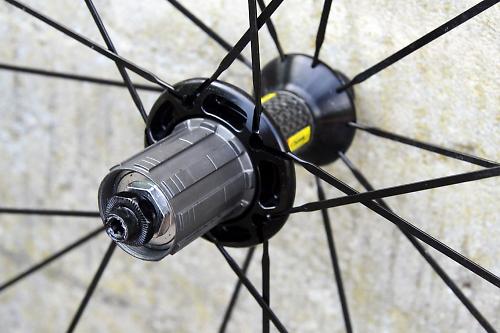 Mavic has a novel solution. Where the likes of Zipp, Enve and Reynolds use a 100% carbon fibre rim, Mavic has developed an alloy extrusion wrapped with a carbon fibre shell, and injected the cavity with foam. Mavic has lots of expertise with alloy rims, and knows that aluminium is better at dissipating heat than carbon, so felt this was the best approach.

Very simply, this alloy rim bed insert acts like a sort of heat sink, drawing the heat away from the carbon braking surface. That's not all. The alloy rim core adds structural integrity to the rim, which leads to a truer rim that should avoid the pulsating that can sometimes occur with one-piece carbon rims. Durability and stiffness are other benefits of this manufacturing approach too. 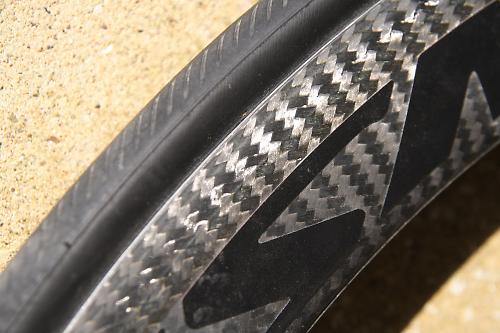 This alloy core is wrapped with a 40mm carbon fibre rim. The brake track is then finished with Mavic's proprietary heat treatment process, involving two types of resin in the braking surface. It calls this TgMAX technology, and claims the Tg point (glass transition temperature is the point at which the resin gets hot enough to revert to its liquid state) is able to exceed 250°C. They tested this with a 100kg rider on a 10km downhill.

Not only does Mavic claim this creates reliable and consistent braking performance, and shorter stopping distances, in the dry, but it also claims much better performance in the wet, too.

The 40mm deep rim has a V-shape profile with a 19mm wide rim bed. Mavic's Fore technology uses threaded inserts at the rim, there are no spoke holes in the rim bed, and bladed aero double butted spokes connect the rims to carbon-bodied hubs. There are 20 radially laced spokes (2-cross on the rear driveside) in each wheel. 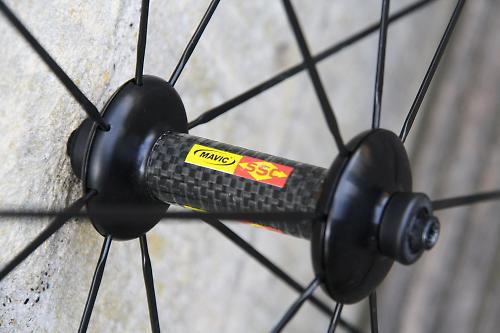 No hidden nipples mean you don't need to remove the tyre and rim tape to adjust the spoke tension here. The hubs aren't anything to get excited about, they're the same as used on other Cosmic wheels in their range. Inside the hubs are Mavic's QRM+ bearings. The bearing preload can be adjusted without taking the wheels out of the bike.

Mavic continues to push its concept of a wheel-tyre system, and supplies the wheels pre-fitted with a pair of its own tyres, Pro Griplink on the front and Powerlink on the rear, front- and rear-specific tyres. I've been impressed with Mavic's own tyres and these are pretty good, but there are better aftermarket tyres available.

The wheels weigh 1,596g (front: 687g, rear: 882g) on the road.cc scales that don't lie. That's a little more than the claimed 1,545g. Look at the competition though and the Mavic wheels, it has to be said, don't fare so well: a pair of Zipp 303 Firecrest wheels is a claimed 1,475g. However, the Mavics are significantly cheaper than £2,300 retail price of the Zipp wheels. Or you could throw in the recently reviewed Reynolds Aero 58 clincher wheels, with a 1,601g weight and £2,100 price.

To put the wheels through their paces, I've been riding them constantly as everyday wheels over the past six months or so, racking up thousands of kilometres on them. Riding them in the pouring rain, down muddy tracks, bashing through potholes. And through it all, they've not put a foot wrong, they've been solidly reliable and durable. I'd half expected a few blemishes to be revealed in that time, but no, nothing.

As for the braking performance, well it's very good. I've yet to ride a carbon fibre wheel that has amazing braking performance, it still feels just too much of a compromise. While I don't think Mavic has nailed it, they've produced a wheel with more consistent, predictable and reliable braking than a lot of carbon clinchers currently available.

There's plenty of bite when you pull hard on the lever. You can slow down on a steep descent pretty quickly if you need to, but like most carbon wheels, you do need to plan ahead a bit more than you don on alloy rims. When you really need to, the Mavic's quickly scrub off speed, you can rely on them, have confidence in them.

The best aspect of the braking performance is they are smooth and progressive, there's no snatching or pulsating feedback through the brake levers, and in that regard they feel a bit like an alloy wheel. Mavic claim they're good in the wet, and they are, but there's the same drop off in retardation you get from most carbon wheels in the wet.

In my testing they do deal with heat well. I have more confidence dragging the brakes or working them hard on a descent if I really have to, compared to other wheels I've ridden. That testing hasn't included a trip to the Alps or anywhere with a really long descent, though. 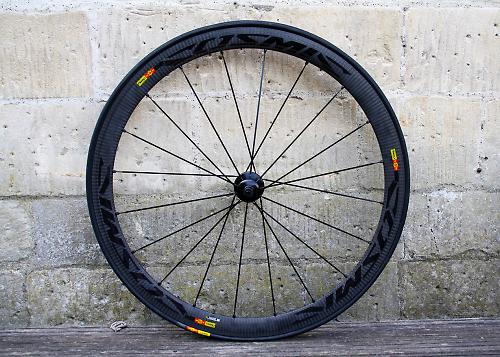 As for speed, well put simply that is hard to draw a conclusion on. road.cc doesn't have a wind tunnel for me to do some comparative testing, so I'll just leave you with my impression that I found them nippy and quick. Clearly they don't have the on-trend wide and bulbous rim shape that seems to be prevalent in the wheel market, but they felt fast compared to other carbon wheels and against a regular alloy wheel, but the differences we're talking about are marginal at best. You're not suddenly going to travel 5kph quicker by bolting these wheels into your bike.

While they don't have that sensational sense of speed that some deeper section carbon wheels give a bike, the upside of the 40mm rim depth is that they handle a range of cross-winds without any adverse effects. They're very stable with a direct side-wind. I'm a light rider and really notice cross-winds and I usually fear riding deep-section wheels in windy conditions, but in the recent storms I have been fine on these.

What they might lack in speed, they make up for in responsiveness. They respond far more keenly than most deeper section wheels, there's none of the lag or flex that some deep section carbon wheels exhibit when being pushed hard. Sling them about the road, get out of the saddle and heave on the bars, and they track sharp and clean. They noticeably lifted the handling performance of every bike I tried them in too. 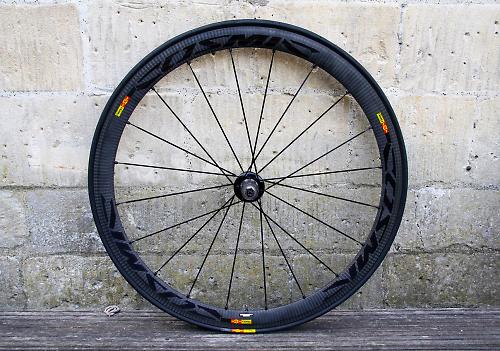 They're a delight to push through corners as well, where that stiffness really comes into play. Happily, they're quite controlled over rough roads and didn't produce a harsh ride at all. They're also a very quiet set of wheels; some deep section carbon wheels can create quite a backdrop of whooshing noises. These didn't, though they were a bit noisy during braking at first, but that soon disappeared.

A slight drawback that will be of more concern to some people is the 19mm internal rim width, which is narrow compared to what a lot of the other wheel manufacturers are leaning towards. They're not designed with wide tyres in mind, but I had good results with a 23mm tyre fitted.

Great wheels with excellent durability and a very high level of stiffness contributing to a responsive ride, and the braking performance is top notch too. Not the lightest and certainly not cheap though.

The best combination of reliability and lightweight for the most versatile aero wheelset. Thanks to the exclusive TgMAX technology, Mavic's carbon clincher solution is the most reliable and dynamic clincher wheelset ever.

They're not the quickest, neither are they the slowest.

They're bombproof; I've tried to break them, but they just won't have it.

Yes, here they don't score so well, but some of the lighter carbon options are more expensive so that's got to be taking into consideration. Against an alloy wheelset, it's no contest.

I was impressed with how well they deal with rough road surfaces, they're not harsh or skittish at all.

They're clearly a lot of money and there are many carbon clincher wheelsets for a lot less than the Mavic RRP, but they pack a lot of technology and the stiffness and braking performance is better than a lot of the cheaper carbon wheels.

Don't feel especially quick, and they're not especially light either. A tough sell.

Would you consider buying the product? Hmmm

Would you recommend the product to a friend? Hmmm

As good as the Mavic wheels are, and I've been very impressed, they just don't feel amazing and joyful to ride, and I can't help feeling that an alloy wheelset can be had for the same weight, or less, with a hefty saving, and not really be a great deal slower. If you have your heart set on a carbon clincher these are a good option for your shortlist. You won't be disappointed. But you might not be blown away either. 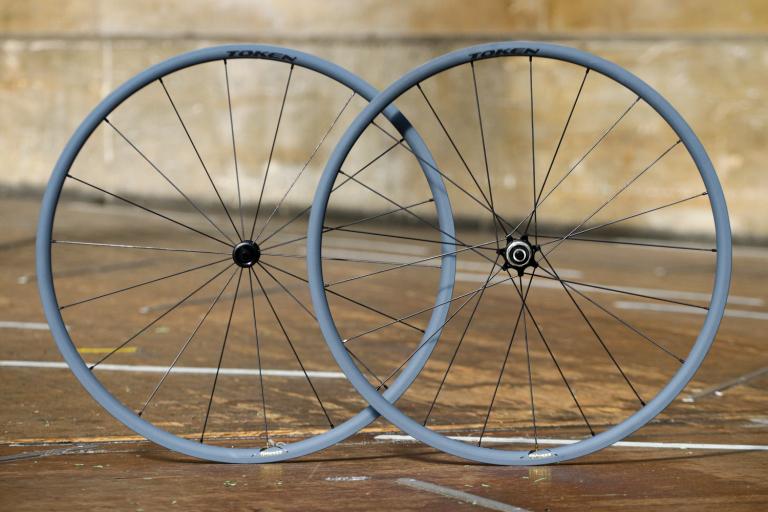 Lightweight, stiff wheelset that excels in the hills while looking the business too 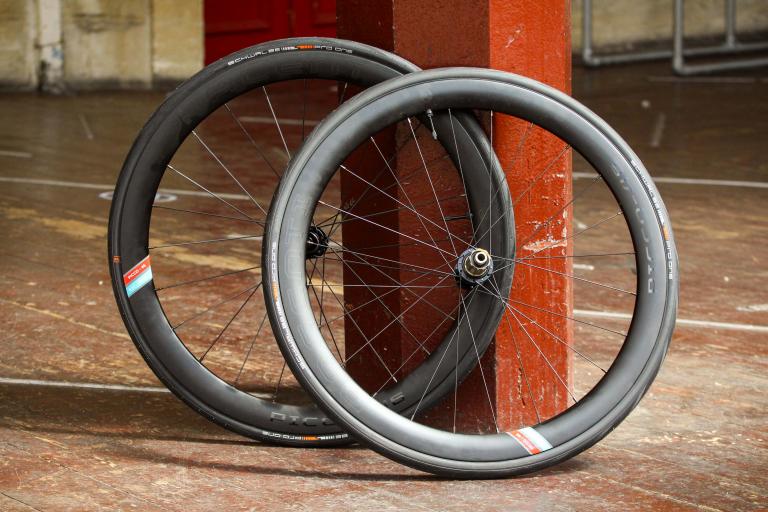 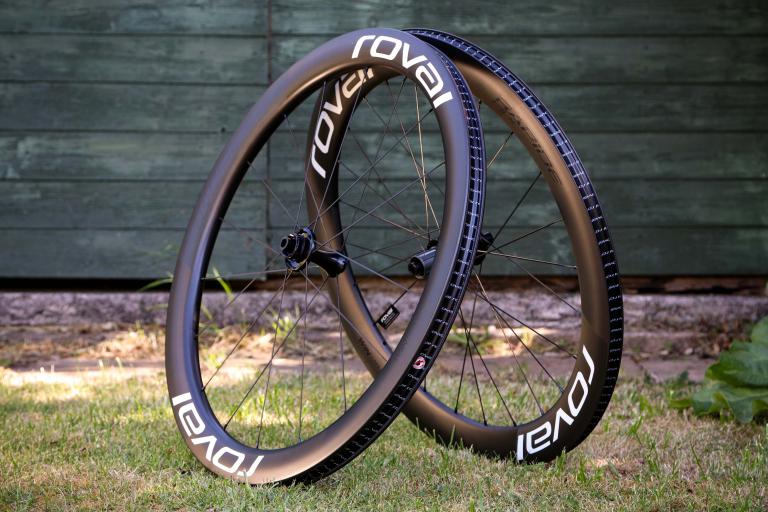 Stupidly fast carbon deeps that handle winds and hills brilliantly. But not tubeless... 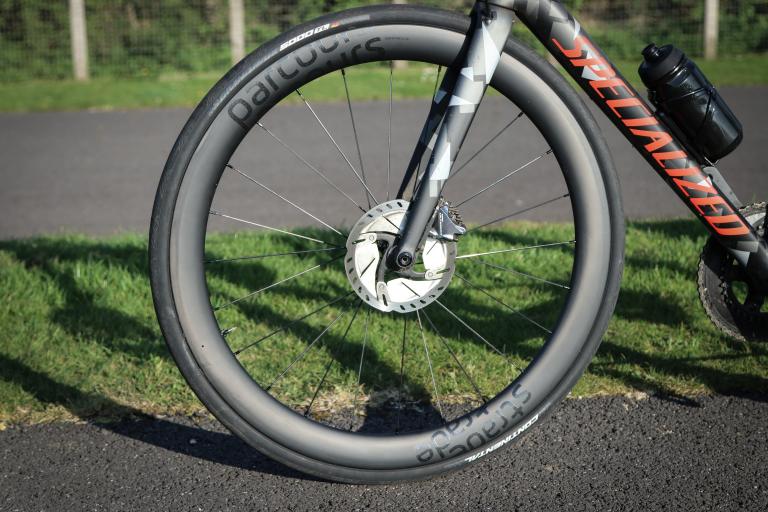