Europcar joined the top ranks of the WorldTour this season which is good news for their Italian bike supplier Colnago because it ensures them much more coverage in the big races. Colnago have launched two brand new bikes this year, the C60 which is the successor to the C59 and their first aero bike, the V1-r. 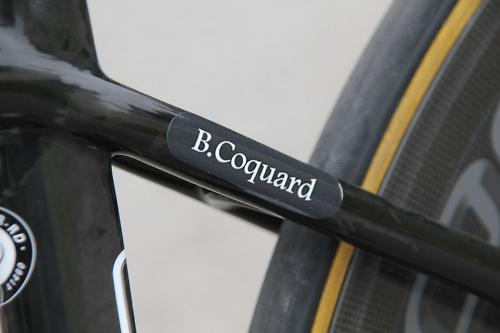 That V1-r is the choice of Bryan Coquard. The 22-year-old French cyclist is making his Tour de France debut and has been making his presence felt in the sprint finishes, with a string of top five finishes and a day in the green jersey, and is currently the closest challenge to Peter Sagan’s throne. 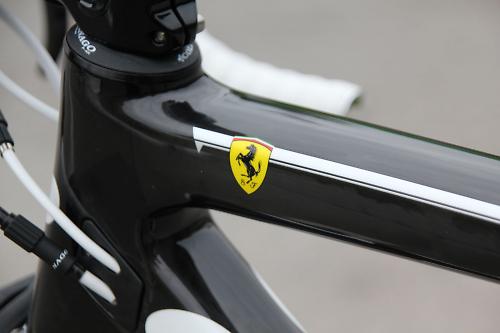 From having a shufty around the Europcar team truck where the mechanics were making last minute preparations, it appears the riders are allowed to choose the model they ride, because we saw not only plenty of the new V1-r aero bikes, but the new C60 too, and we even spotted a couple of the older C59 models lurking in the racks. 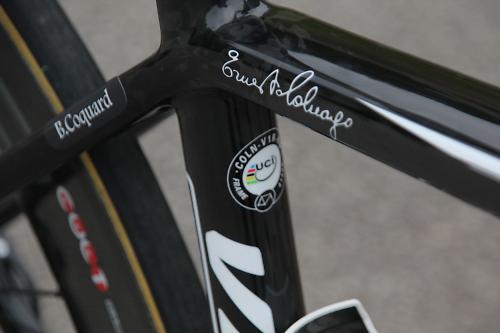 Most sprinters, like Mark Cavendish with his Specialized Venge and Marcel Kittel with his Giant Propel, clearly prefer the advantage of an aero road bike. Colnago have never gone down this route of bicycle development before, so the V1-r represents a bold new direction for the brand steeped in history. It’ll probably upset some of the traditionalists that bemoaned the day Colnago started producing frames in the Far East, but that’s the challenge of progress.

Coquard is 1.69m (5ft 4in) tall and 58kg, so quite the opposite to Kittel and more in the mould of Cavendish, so rides quite a small frame size, but there was no size sticker on the frame and we didn't have our tape measure to hand. We're guessing it's probably a 48 or 50. 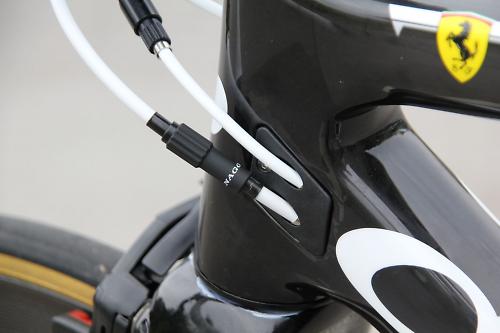 The V1-r features tube profiles influenced by commonly available NACA airfoil profiles, developed for aeroplane wings by the National Advisory Committee for Aeronautics. They truncate the tail section, much like the Kamm Tail shape that is used by many other bicycle manufacturers, as this saves weight, gets around the UCI’s 3:1 rule and provides the same aerodynamic performance. 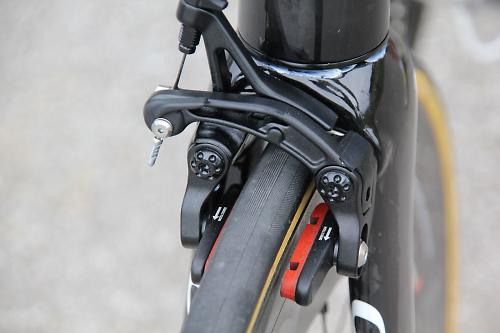 Gone is the rear brake caliper from the usual seat stay mounted position, it’s been hidden away under the chainstays, a move we’ve seen most aero frames adopt. Colnago uses the increasingly popular direct-mount brake caliper at both ends, and where Campagnolo and SRAM don’t currently offer such a brake, Colnago have manufactured their own. Yes, it's not pretty. 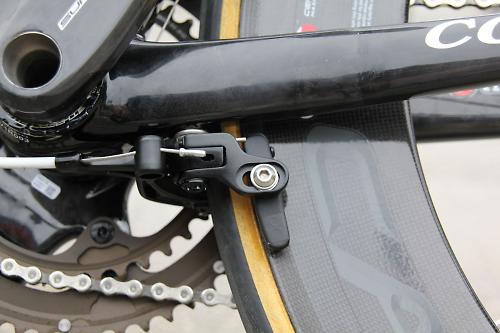 A new fork, with the same truncated aero profile as the frame, uses a  1 1/4in-1 1/8in tapered steerer tube with machined aluminium bearing seats and aluminium dropouts. There are carbon dropouts on the frame to save weight. According to Colnago the frame will accept 28mm tyres, wide tyres not typically being high on the list of priorities for aero road bikes. 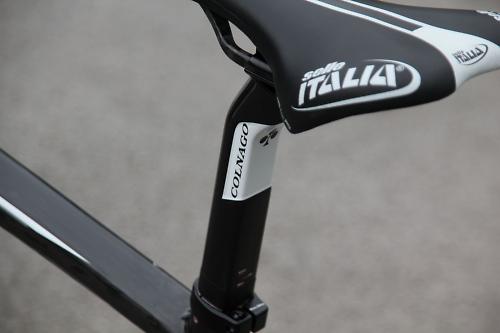 Colnago have developed a proprietary 27.2mm seatpost with the same truncated airfoil shape as the frame and uses a forged aluminium head as found on previous Colnago models. ThreadFit82.5, first seen on the C60, provides a wider bottom bracket shell for which oversize the down tube, seat tube and chainstays to increase stiffness. It accepts any BB86 compatible crank from Shimano, SRAM, Campagnolo and FSA. 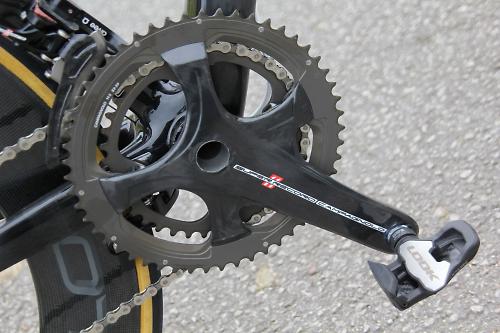 Europcar are sponsored by Campagnolo so keeping the Italian theme flowing strongly through the bikes into the equipment. Coquard’s bike was built with the brand new Campagnolo Super Record mechanical groupset, the first time we’ve actually seen it with our own eyes since the Italian company unveiled it a good few weeks ago. We know some riders have their preference with regards to mechanical vs electronic, and it appears Coquard prefers the former. 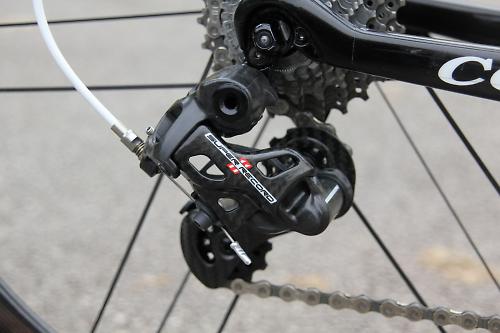 The new groupset has had quite a dramatic makeover. Every component has been updated, most significantly in the chainset and derailleurs. With the new chainset, Campagnolo have moved to a 4 arm spider with a single BCD (bolt circle diameter) that can accommodate all chainring options, 53/39, 52/36 and 50/34. As well as being a more versatile design and easier to swap rings, Campagnolo say they have increased stiffness by bolting the chainrings directly to the new larger spider.

With a dramatic new look is the rear derailleur, with the changes apparently providing a stiffer unit for smoother and more reliable shifting performance, with a reshaped parallelogram mechanism and revised angle at which it moves relative to the cassette to keep the chain closer. 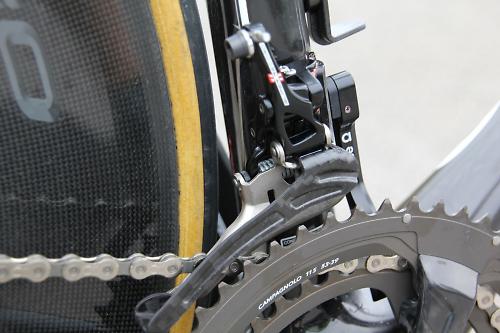 The front derailleur has evolved from the Super Record RS that did the rounds not so long ago. The changes have focused on increasing stiffness. It features a new carbon fibre outer cage to reduce weight while apparently maintaining the same stiffness of the RS’s aluminium cage. Like Shimano’s latest groupsets, they’ve extended the arm to provide extra leverage so shifting to the bigger ring is easier and lighter. 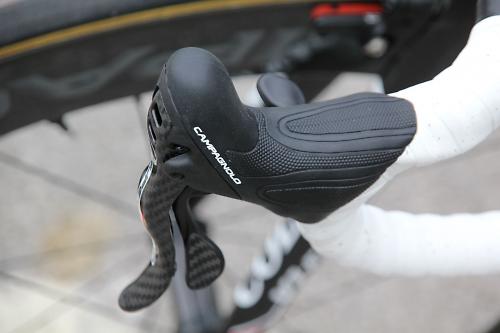 Lastly, while the Ergopower levers look unchanged from the outside, a simple reshaped brake lever body and new hypoallergenic silicone hoods, it’s inside that the changes are going to be noticed. The index pattern has been modified, the  front shift lever now operates with two clicks to downshift from the large to small chainring, while a third click adjusts the trim when in more “extreme gears”, while three clicks are needed for upshifting, removing the necessity of an additional click for trim. What these changes should mean is no chain and derailleur cage interference when shifting across the entire cassette. 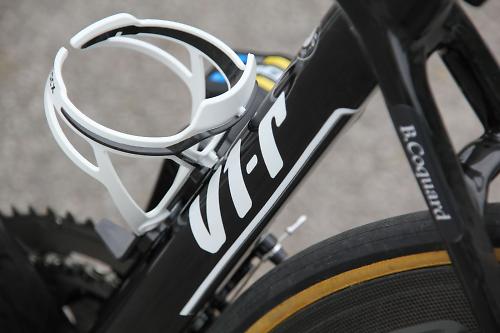 Coquard goes with a set of super deep Campagnolo Bora Ultra 80 wheels, the 80 denoting the rim depth in millimetres. They’re not the sort of wheels you’d want to lug over the mountains, but for sprint finishes they offer good aerodynamics. As they’re tubular they not that heavy, with a claimed 1,540g weight. Hutchinson tubular tyres are glued to the rims. 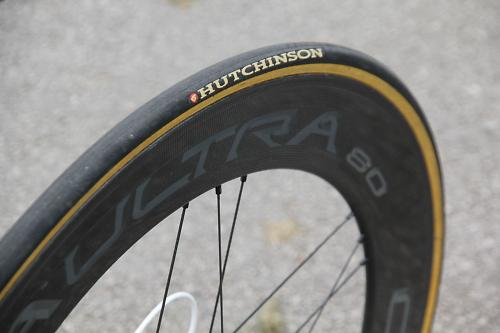 Deda supply the handlebars and stems for the team. We spotted a good number of the team using this Alanera Team Edition one-piece integrated, with a slick gloss black finish devoid of many logos or decals of the production handlebars you can see on the company’s website. Is it a new version of the handlebar they’re testing? Deda claim the handlebar has a weight of 409g and it has a 128mm drop and 80mm reach, with a load of stem lengths and bar widths available. 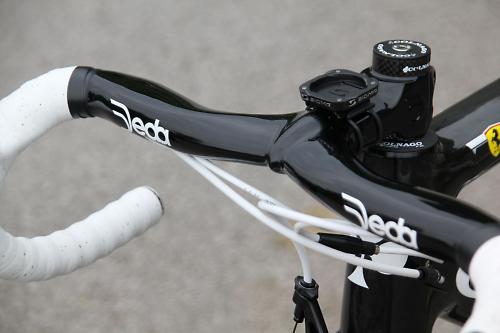 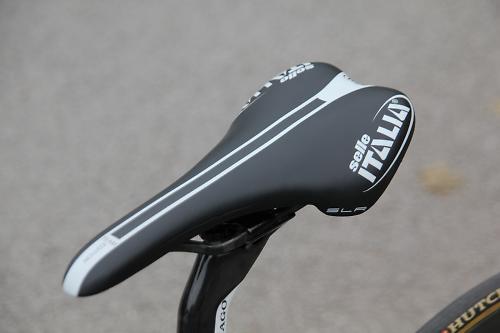