We spotted the new Campagnolo groupset at the Giro d’Italia, and today the Italian company has revealed entirely new Super Record, Record and Chorus mechanical groupsets. The three new groupsets get the same redesigned chainset, Ergopower levers and front and rear derailleurs, all featuring updates to improve shifting performance.

Let’s start with the chainset, because that component sees the biggest changes and is the centrepiece of any groupset when it’s hanging off a frame. Campagnolo have moved to a 4 arm spider with a single BCD (bolt circle diameter) that can accommodate all chainring options, 53/39, 52/36 and 50/34. As well as being a more versatile design and easier to swap rings, Campagnolo say they have increased stiffness by bolting the chainrings directly to the new larger spider. The new chainset will be available in the aforementioned ring combinations and 170, 172.5 and 175mm arm lengths.

This move to a chainset that can easily take any chainrings you want to fit is a sensible step forward, making it significantly easier to change from a standard double to a compact - handy if you’re going to the Alps for a week but don’t really want to fork out for a whole new chainset.

The unequal spacing between the arms makes the chainset resemble newer models from Shimano. 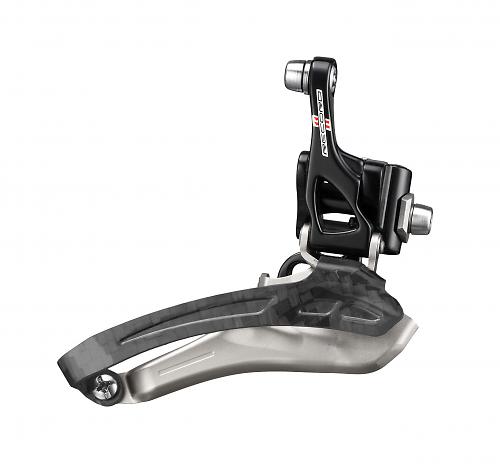 The new front derailleur is an evolution of the one we first saw on the Super Record RS groupset a while back. The Super Record version uses a one-piece carbon fibre outer cage to reduce weight while apparently maintaining the same stiffness of the RS, which uses a prototype aluminium cage. To improve shifting they’ve added a longer arm, similar to Shimano’s Dura-Ace, which increases leverage for lighter and easier upshifts to the large chainring. 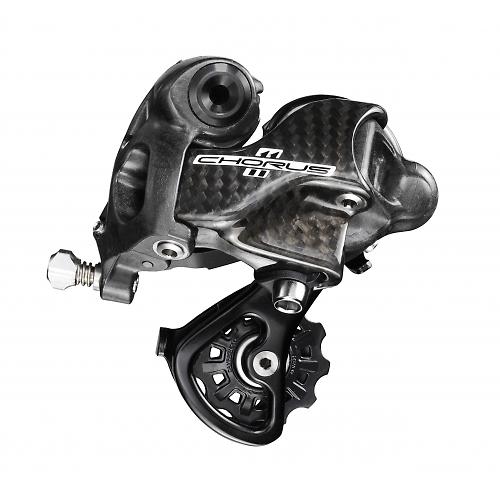 Also getting a dramatic makeover is the rear derailleur. The “new design is stiffer, smoother and functions even better than its predecessor,” says Campagnolo, and they have achieved this by reshaping the parallelogram mechanism and changing the angle at which it moves relative to the cassette.

These changes keep the chain closer to the cassette so the chain will engage with more teeth, which they say allows for “better power transfer, better grip/cassette interface and a longer life for consumable components.” They also claim that there is less resistance when shifting at the higher end of the cassette with 25, 27 or 29 sprockets, so shifting performance for an 11-29 cassette will be the same as for an 11-23. 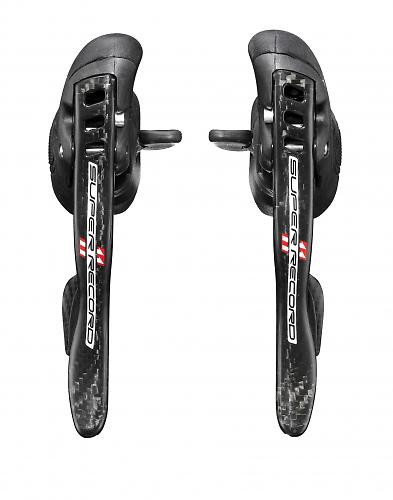 Visually the Ergopower levers look the same, though Campagnolo have reshaped the inside face of the brake lever body so it is a closer fit with a wider range of handlebars, and the hoods are now constructed from a hypoallergenic silicone with varying density and grooves to provide more comfort and grip.

But it’s inside that real change have been made, Campagnolo having tweaked the index pattern. The front shift lever now operates with two clicks to downshift from the large to small chainring, while a third click adjusts the trim when in more “extreme gears”, while three clicks are needed for upshifting, removing the necessity of an additional click for trim.

Campagnolo says of the changes, “The new design allows for shifting across the entire cassette without any interference between chain and derailleur cage.”

The changes to both derailleurs and the shifters should mean it’s possible to cross the chain from big to big, small to small, with no interference or rubbing on the cage, similar to SRAM’s 22 which was designed to allow you to use any gear combination you wanted. 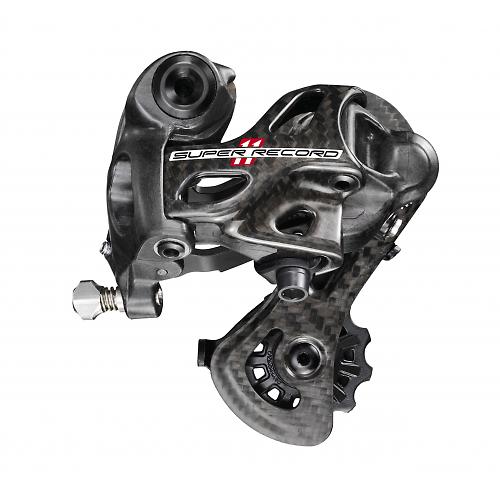 No details on availability or pricing yet, as soon as we know we’ll update you all. More at www.campagnolo.com