Riding through the absolutely spectacular countryside surrounding Park City in Utah [he's showing off - Ed], along a mixture of black top and long stretches of gravelled backcountry farm roads weaving through huge agricultural pastures, it’s easy to see why gravel riding/grinding/racing is popular in some parts of the US.

This formerly underground scene has since spawned a new category of bikes by a good handful of manufacturers that blur the traditional boundaries between road and cyclo-cross bikes. While GT's brand new Grade, launched just last week, has clearly been inspired by this desire for multi-terrain capable bikes, they have actually designed a bike with so much versatility that it appeals to a wider spectrum of cyclists than just those wanting to go gravel racing. Of course, the idea of riding a road bike across any sort of terrain, be it smoothly paved roads or rough and bumpy gravel tracks, woodland trails laced with roots or edge-of-field bridleways is nothing new really. Road cyclists have been doing it since the dawn of the bicycle. How do you think cyclo-cross was invented? GT recognise this and aren’t claiming to have pioneered a new category of bike, but they are responding to the new demands from many cyclists.

The sort of cyclists in question are less interested in chasing segments on a sub-7kg race bike or reciting some set of rules, and instead are more interested in exploring the landscape on the road and away from the traffic and congestion in the woods and on the plains. 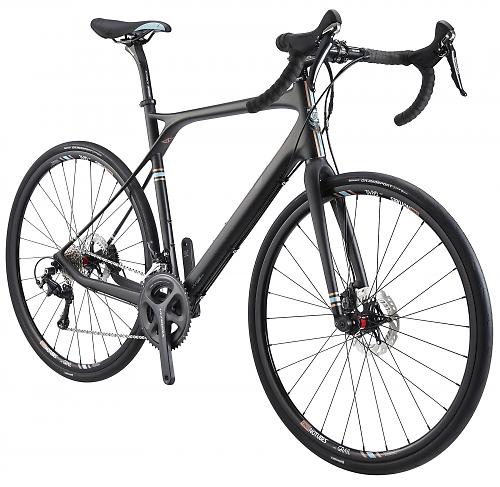 With its long wheelbase, tall head tube, disc brakes, slacker angles, wide tyres and mounts for mudguards and racks, the Grade is as ideally suited for commuting, touring or cyclo-cross as it is for gravel grinding. One bike to rule them all, then.

How does it ride?

In a nutshell, it rides very nicely. The Grade is a fantastically fun bike to ride, no matter the surface passing under its 28mm tyres. It barrels along the road at the same sort of speeds a regular road bike achieves, yet show it some off-road trails, whether gravel covered tracks or narrow dirt singletrack paths, and it’s equally at home. It’s as adept at going off the beaten path as it is sticking to the roads. 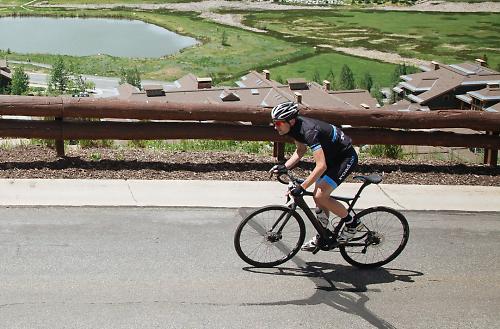 For the launch we were taken on some loops that encompassed the sort of terrain you would not dare take a regular road bike on. A cyclo-cross bike: yes. A mountain bike: definitely. But here we were on road bikes not only coping just fine, but having loads of fun. And back on tarmac, the Grade reverts to riding just like a regular road bike with all the pace and verve you’d expect of a carbon-framed option. 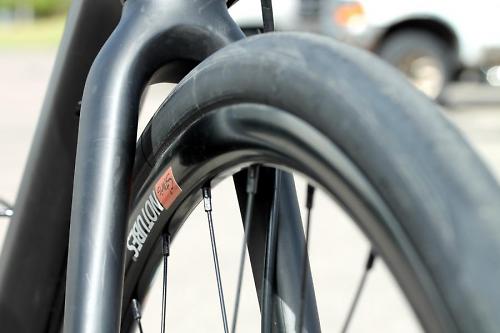 Much of this capability is of course down to the 28mm Continental tyres, in my case inflated to about 75-80psi. Any road bike you can fit such tyres to is going to have similar capability, but most normal road bikes will struggle with anything wider than 25mm. That’s why we’ve increasingly seen cyclo-cross bikes pressed into service on the daily commute.

The Grade though, like many gravel bikes, will take wider tyres, in this case up to 35mm. GT reckon you could probably go wider with some tyre brands. The new No Tubes Grail rims the tyres are mounted to make the tyres look bloody enormous though. 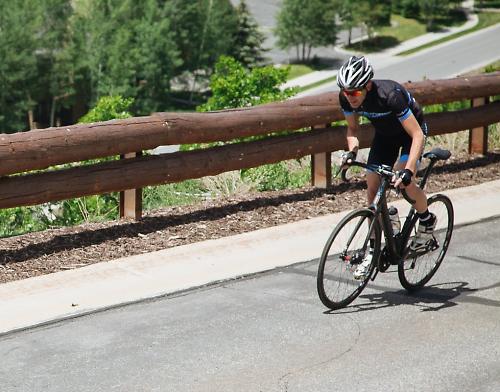 It’s not just the wider tyres that make this bike, the geometry of the Grade sets it apart from regular road bikes, a key feature being the long wheelbase. It’s much longer than many ‘endurance’ bikes such as the Cannondale Synapse or Bianchi Infinito. It’s also a bit slacker with a taller head tube too - changes that lend the Grade fantastic stability at any speed, no matter the terrain. On the road the bike feels very relaxed and easy to control through the bends and in a tight peloton. I had no problem weaving through the suburbs and it didn’t feel sluggish when sprinting out of corners or on fast downhill bends.

Head off-road, as we did on our test rides on a mixture of smoothly surfaced farm tracks and much rougher and deep gravelled paths, and the Grade shows enormous capability. It never felt out of its depth, never got flustered at speed or on exceptionally rough terrain, it just hoovered it all up.

Neither does it ever feel nervous or twitchy, instead remaining resolutely solid and stable. You can hurtle along gravel tracks at road riding speeds and feel perfectly safe, with the handling showing just the right level of responsiveness. 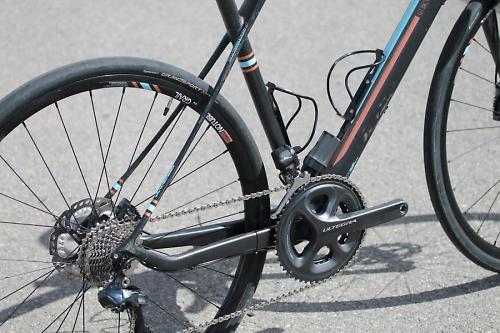 GT have developed the frame to provide comfort, with super skinny glass-fibre seatstays that flex noticeably when you press down hard on the saddle. This, along with the seat tube and top tube ‘tuned’ to offer a claimed 11mm of deflection, certainly takes the harshness out of riding over any sort of rough road or gravel track. Rippled and corrugated dirt tracks were impressively smoothed out and some of the rougher road surfaces we encountered passed unannounced under the wheels. I can’t wait to see how the frame copes with some typical British roads, but that'll have to wait. 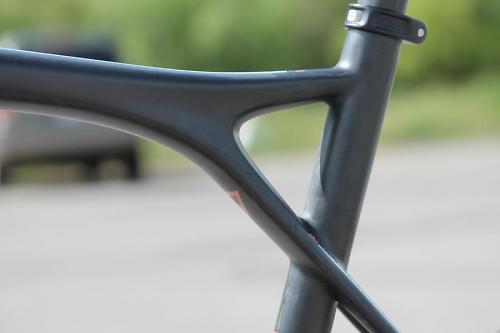 I loved the fit and position of the 55cm model I tested. The taller head tube places the bars a bit higher, obviously, but not too high that I felt control was compromised, and in the drops the position felt as racy as on most road bikes. The reach is good with enough stretch from the saddle to bars that I didn’t feel cramped.

Flared handlebars aren’t something I’ve much experience with, and initial skepticism was soon pushed aside when I found the extra width a bonus on off-road trails. They provide a bit more leverage and control, something that is appreciated when attempting to negotiate deep gravel that you'd never usually take a road bike through. 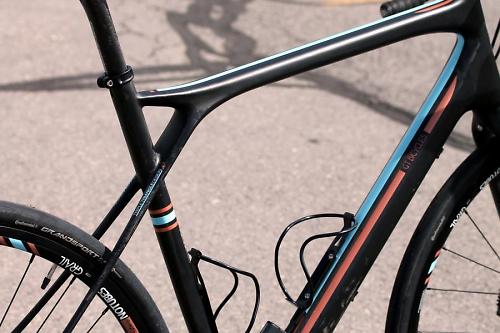 There are details of which I’m a fan, the external cable routing being one, with the cables and rear brake hose neatly clipped to the underside of the down tube. Full-length outers prevent dirt getting into the cables, the frame looks clean, and cable replacement is going to be far easier than with internal cable routing. A removable seatstay bridge provides a mudguard mount, a really smart solution that keeps everyone happy.

As a road bike, the Grade isn’t at all compromised in pursuit of its off-road capabilities. The frame is plenty stiff enough for sprinting and fast paced group riding, and out-of-thesaddle climbing reveals the frame to be very direct and responsive. The press-fit bottom bracket allows the down tube and chainstays to be suitably oversized - similar dimensions to many top-end road frames, in fact - contributing to the high level of stiffness. 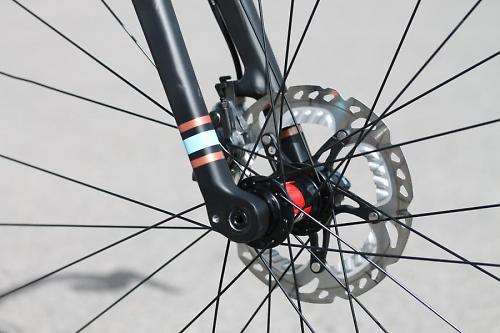 Up front it’s all very stiff too, a result of the tapered head tube and 15mm bolt-thru front axle. There’s a lot of debate about quick release versus bolt-thru axles on the new breed of disc-equipped road bikes at present, and GT say they went for the 135mm quick release rear axle out of simplicity and not wanting to force their customers into adopting new standards.

What does it cost?

GT should be applauded for focusing on making the Grade accessible, with seven models comprising two carbon models and five aluminium bikes. The range starts at a very reasonable £699 with a Shimano Claris groupset. All bikes get disc brakes, mechanical at the more affordable end and hydraulic at the top.

The Shimano Di2-equipped model I rode wasn’t a production bike; the new R685 mechanical shift/hydraulic brake lever groupset that will feature on the range-topping £2,999 Grade Carbon Ultegra simply wasn’t available in time for this launch. The rest of the spec was the same, though, including the impressive new Stan’s No Tubes Grail rim with a 21mm internal diameter, which provides a great platform for the 28mm tyres. 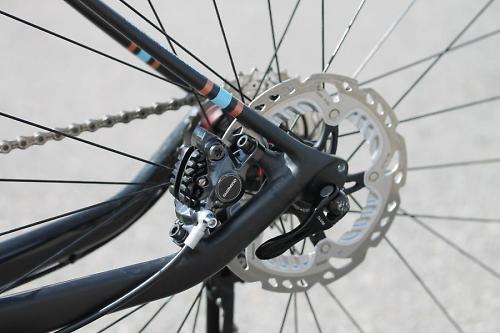 Shimano's hydraulic disc brakes are a highlight of the bike. I was impressed when I rode them on the Storck TIX recently, and I've come away from the Grade with nothing but praise for them. They make a lot of sense on a bike designed for such varied riding, with huge power and fantastic modulation that makes braking fun on tricky technical off-road descents. Even on the road they make sense too; easier one finger braking is useful all of the time. You very quickly get the hang of them, get used to the extra power, and it's only when you go back to a regular road bike with caliper brakes that you realise how much of a gamechanger they really are.

I came away impressed with the Grade. Obviously I want to get it out on more familiar roads and trails to fully assess it, which I will do when the bike lands in the UK later this year, but based on a couple of rides it’s clear GT have done their homework well.

The Grade isn’t a revolutionary design, but it’s a well thought out package that will appeal to the many riders who want one bike that is happy on the road and is capable of going off-road, and is versatile enough to be turned into a touring bike, cyclo-cross racer, mudguard-equipped commuter or regular road bike. The Grade is a chameleon of a bike. The Grade handles any terrain with aplomb, isn’t fazed by rough terrain and whizzes along the smoother stuff as quickly as any road bike. That you can fit mudguards and racks boosts it versatility immensely, making it a bike that can comfortably replace three or four dedicated purpose bikes. It’s well suited to the recreational cyclist who cycles for fun or transportation, rather than to those who count segments.