GT Bicycles have launched the Grade, a new disc-equipped road bike with space for 35mm tyres and, on some models, a fork with 15mm bolt-thru axle. The range will feature seven bikes with carbon fibre and aluminium models and prices starting from £699 (provisional price). Road bikes that can take wider tyres and feature disc brakes and relaxed geometry are becoming increasingly popular with the sort of riders who value versatility of function and purpose over the traditional values of a performance-orientated road race bike. In essence the Grade is a road bike with the wider tyre capacity of cyclo-cross bikes and the geometry, comfort features and disc brakes of the latest endurance road bikes. The sort of bike for those that don't race and prefer not to be confined by the limitations of traditional road bikes to only riding on the road with skinny tyres. 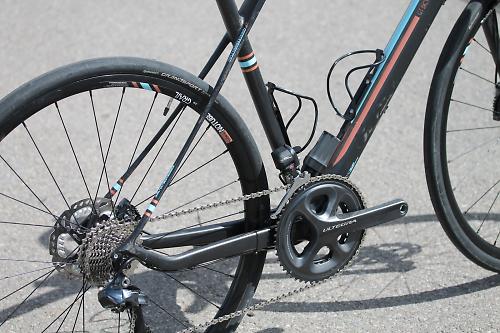 The Grade has been nearly three years in development and will be available with either a carbon fibre or aluminium frame at a range of prices, from a £699 Claris-equipped bike right up to a Ultegra and hydraulic disc built model costing £2,999. All feature a frame sharing the same key ingredients, including disc brake across the board, space for up to 35mm tyres, pencil thin seatstays and oversized kinked chainstays. The top few models feature a 15mm bolt-thru front axle, and all bikes share the same regular quick release rear axle. 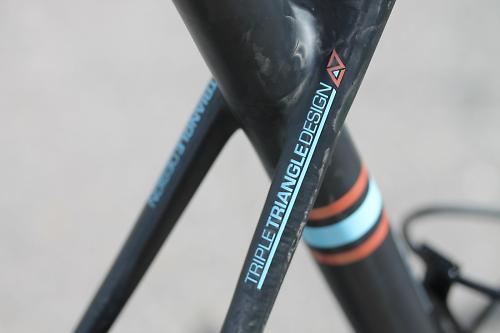 Categorising these new breed of bikes that blur the traditional lines between road and cyclo-cross bikes aren't easy, so GT have coined the 'EnduRoad' tag. They reckon this sums up the “shift in the road community away from the traditional race mindset”, adding “EnduRoad bikes are the perfect choice for anyone who wants to go on all-day adventures, race a Fondo, or explore those hidden side roads just outside of town.” The carbon Grade uses Hi-Mod carbon fibre in the oversized down tube and chainstays to ensure plenty of frame stiffness. They worked on the shape and carbon layup of the top tube, seat tube and seatstays to offer a large amount of deflection to smooth out rough roads. The seat tube for example has a bi-directional taper at the bottom bracket, which GT reckons acts like a hinge. It's as wide as the bottom bracket shell for side-to-side stiffness, but allows some fore-and-aft flex. The seatpost is a 27.2mm diameter which helps to offer more available deflection. 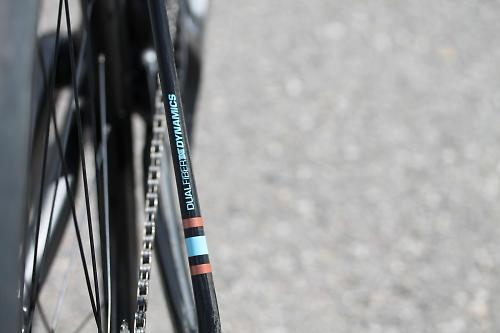 While all the frames regardless of material share the same key features, the carbon frame is unique in utilising what GT is calling 'Dual Fiber Dynamics'. These are seat stays constructed with a solid composite glass core and wrapped with a carbon fibre layer, which GT claim offer no weight penalty compared to a hollow tube. They also have a very small outside diameter, at their thinnest they are 6x9mm. GT claims the shallow angle afforded by the Triple Triangle design provides increased deflection. 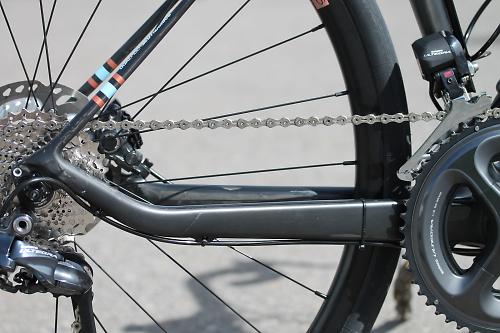 These seatstays are incorporated into a frame with GT's famous and iconic Triple Triangle silhouette. The stays are widely spaced around the seat tube which they reckon adds extra impact deflection. Oversized box section chainstays with a kink towards the dropout, in a style reminiscent of BMC's TeamMachine, which is required to mount the disc caliper in the desired location. The fork is an all-carbon constuction with a tapered steerer tube. GT says they focused on the actual taper of the steerer tube, as they reckon you can tailor the comfort based on the specifics of the taper. As with many new bikes in this category, GT have gone with a 15mm bolt-thru axle. All frames feature other modern details such as a tapered head tube, press-fit 30 bottom bracket and removeable mudguard mounts. Some of the models are bolstered with a 15mm bolt-thru front axle with a regular quick release rear axle in 135mm spacing, while lower down the range a fork with a regular quick release axle is used. The carbon frame weighs a claimed 950g for a medium, we don't have a weight for the aluminium frame yet. 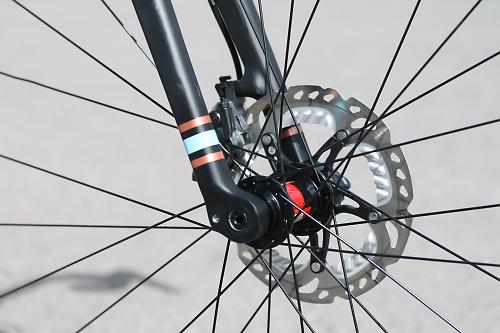 Unusually for a new frame GT have steered clear of internal cable routing and routed all the cables externally, alongside the bottom of the down tube. Boosting the versatility are the mudguard mounts, with eyelets in the fork and rear dropout and, at the seatstays, a removable mounting bridge. That means you could fit mudguards for winter riding and commuting, for winter training and, come the summer, ditch the mudguards and you have the clean lines of a road bike. 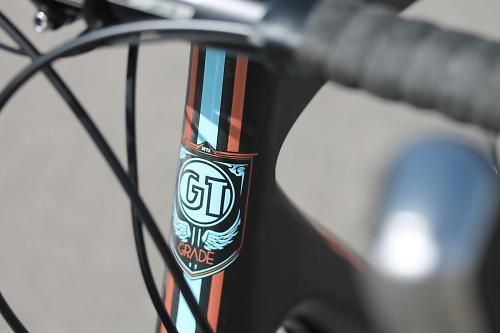 GT have given the Grade the sort of geometry we're seeing on endurance and sportive bikes, so a long wheelbase, relaxed head angle and taller head tube are the defining features. To pick one of the six sizes, a 56 has an effective top tube of 565mm with a 601mm stack and 381mm reach. The head angle is 71.5 degrees and the seat angle is 73. The wheelbase is 1031mm with 430mm chainstays.

The Grade Alloy X , the top-end aluminium model, costs £1,599 and uses the same carbon fibre fork with 15mm bolt-thru axle as the two carbon bikes above it in the range. It combines a Shimano 105 mechanical groupset with Shimano R685 hydraulic disc brakes and a FSA Omega Mega EXO 52/36 chainset. We'll have more from the launch over the weekend including a first ride report and interviews with the designer, so stay tuned for more. The bike in the photo isn't a production model, because of lack of availability of Shimano's new ST-RS685 mechanical shift and hydraulic brake lever, it's fitted with the current Di2 groupset, but the rest of the specification is the same as the top-end production model.