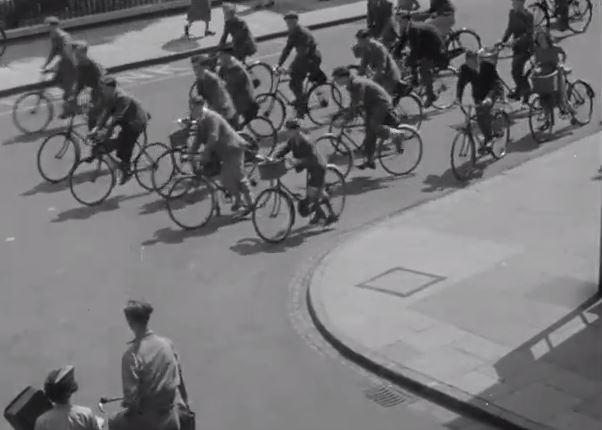 Video: Cambridge in 1945 – when bicycles ruled the roads

Then as now, bikes were favoured transport to extent not seen elsewhere in Britain
by Simon_MacMichael

In a week in which plans for segregated bike lanes in Cambridge were put on hold amid concerns over “kamikaze cyclists”, here’s a film from nearly 70 years ago that underlines that then, as now, bicycles were the favoured mode of transport in the city to an extent not seen anywhere else in Britain.

The film, made in 1945 and uploaded to Vimeo by the British Council, is about the University of Cambridge and those who study and work there, and touches on bicycles on a couple of occasions.

Fashions may change, but some of the script could have been written today, such as this extract, two minutes in:

“Cambridge town, where the buses seem so menacingly big and the streets, even the main street, so defiantly narrow.

“Where the people share the streets with the buses, motor cars, horses and carts, and bicycles.

“Cambridge is the place in England to see bicycles. In ones and twos, or sometimes in hundreds.”

There are more bicycles on view around 4 minutes 40 seconds in as students head off to their lectures and tutorials.

As blogger and cycling activist David Hembrow has pointed out, Cambridge's flat terrain and compact street plan make it ideal for cycling. But Hembrow also points out a factor that contributes hugely to Cambridge's success in being the only UK city where almost 20 percent of all journeys are made by bike: students.

From a population of 130,000, Hembrow says, Cambridge has 43,000 students. Being as even the relatively affluent student population in Cambridge isn't swimming in cash, it's not hard to see that they turn to bikes as an inexpensive mode of transport.

In fact, the university practically forces them to do so. Except in rare special circumstances, students aren't allowed to keep cars in Cambridge. As The Student Room puts it in its section about getting around Cambridge:

Car (forget it)
Undergraduate students are not normally allowed to keep a car; special permission must be sought from the University Proctor, and is unlikely to be granted unless there are special reasons for having one (such as being a driver for a sports team etc). Even so, parking is sparse and the one way systems/bollard systems mean town-centre driving is nearly impossible. Also, there are so many bikes around that driving is pretty unpleasant.

That last comment's interesting. Cambridge has surprisingly few bike-specific facilities, so bikes and cars are forced to interact far more than in towns where the high proportion of bike journeys is a result of well-designed segregated infrastructure.

All of which makes even more mystifying the decision earlier this week of the county council's planning and environment committee to effectively scupper plans for segregated lanes, as mentioned at the top of this story.The plans had widespread support, and would have helped make Cambridge a more pleasant place for both drivers and cyclists by removing those "pretty unpleasant" interactions.

John Stevenson, road.cc's editor-at-large, recently moved to Cambridge, and contributed to this report.