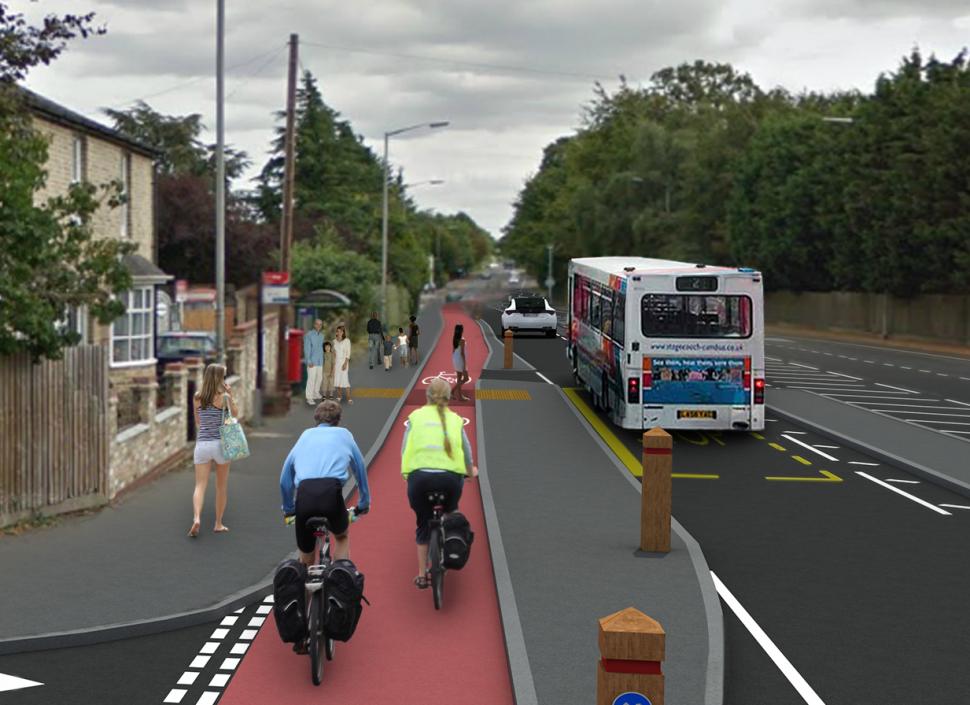 Despite successful implementation across Europe and in London, and widespread approval during recent planning consultation, it doesn’t look like segregated bike lanes and ‘floating’ bus stops will be coming to Cambridge any time soon. Councillors yesterday postponed a decision on a implementing a £1.8 million bike path project citing concerns about  “kamikaze” cyclists.

Cambridgeshire County Council’s were debating plans for improved cycling facilities on Hills Road and Huntingdon Road, but called for revised plans to be submitted in July, despite warnings from council officers that Government funding for the scheme had to be spent by May.

Chris Havergal of Cambridge News reports that councillors expressed concern that the proposed floating bus stops, which allow cyclists to safely pass stationary busses, would be a hazard for pedestrians who would have to cross cycle lanes to board and disembark.

John Williams, Liberal Democrat councillor for Fulbourn, said: “I can’t tell you how often I see cyclists disobeying red lights and not stopping at pedestrians crossings and pelican crossings.

“I don’t have any confidence cyclists will give way to pedestrians moving to the bus stop because of what I see going on in this city with cyclists.

“Unless we make pedestrians the priority at these bus stops, I have serious concerns there will be an accident.”

Williams’ fellow Liberal Democrat, David Jenkins, councillor for Histon, said: “I’m concerned about cyclists’ behaviour. It’s only a small minority, but it’s a significant small minority of kamikaze cyclists in the city and they are intolerant of other road users, and there has to be some way of policing them.

“Simply allowing them to have priority means less confident bus users will be stranded on the island as these guys go past.”

However, Jenkins later wrote on his blog that he was nevertheless in favour of the plans. He voted against the postponement of the decision, which he described as “an unnecessary cop-out.”

“I think this is a project which, on balance, I support. I fully support some of the misgiving of my residents but on balance I shall support it.”

Martin Lucas-Smith, the organisation’s chairman, had told the committee that floating bus stops had been used across Europe and elsewhere in the UK with no major problems.

He added: “These schemes are crucial if Cambridge isn’t to grind to a halt. It isn’t about giving cyclists favours, it’s encouraging more people to cycle.”