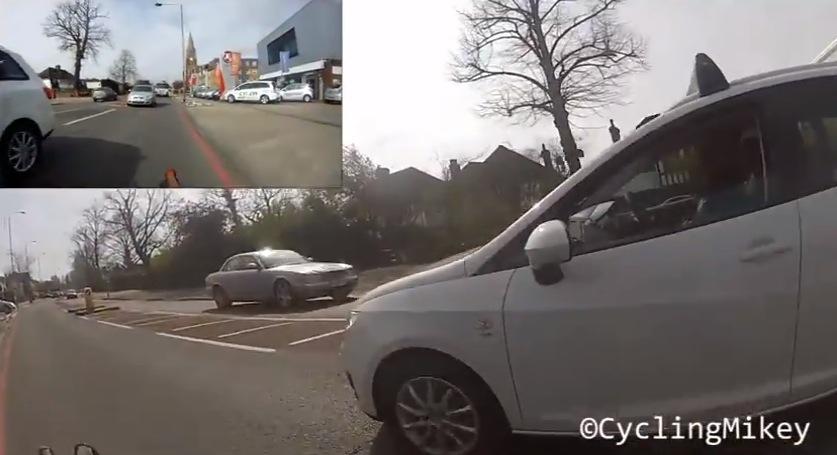 A driver in South London has spoken of the “upset” he felt after footage of him exchanging words with a cyclist after trying to pass him at a pinch point on the road was posted to YouTube. The driver seemed to have interpreted a signal from to hold back from the rider, who also told road.cc why he takes helmet camera footage and uploads it to the video-sharing site.

Robert Lewis, aged 56, was seeking to overtake a recumbent bike ridden by YouTube user CyclingMikey as the pair headed along Bromley Common on Thursday 20 March.

As the video shows, with a pedestrian island ahead on the road creating a pinch point, the cyclist gestured to the motorist to hold back until it was safe to overtake.

But the motorist seems to have misinterpreted it as a signal to overtake, and afterwards there was an exchange in which he told CyclingMikey that he should be on the cycle path on the adjacent footway.

The driver, 56-year-old Robert Lewis, told This Is Local London: "I didn't sleep very well over the weekend because it really upset me.

"I didn't sleep very well over the weekend because it really upset me.

"I don't really get into confrontations with people on the road. I don't speed, I've never had a parking fine since I started driving in 1975.

"I'm annoyed he's put this thing about me on YouTube.”

Referring to the incident, Mr Lewis said: "He's given me this hand signal and I am thinking he's wanting me to pass.

"He says 'stay away from me' and he says he's going to put the video on YouTube which I think is an infringement of my privacy.

"I think he does normal cyclists a disservice by not using the cycle lanes for safety reasons, but happily using them if traffic impedes his progress," he added.

That final point perhaps reinforces a misconception held by many motorists who believe that cyclists are obliged to use on-road cycle lanes or shared use paths on the footway.

In fact there is no legal requirement to do so, and due to the presence of pedestrians on the footway plus the presence of driveways and side road junctions, it is safer for faster moving cyclists to be on the main carriageway.

CyclingMikey, who in the description to the video points out that besides being a cyclist, he's also an experiencd driver, told road.cc: “I feel bad that he's upset about this incident, but then how does a little embarrassment compare with the fear and danger he caused me?

“It's very dangerous to cyclists for a driver to attempt to overtake at a pinch point, and I have been knocked off by a driver doing something very similar in the past,” as shown in this video.

Since posting that footage in October 2011, he’s since been overtaken by the same taxi on at least two occasions – six months later in April 2012, and again in January 2013 – and was given much more space each time.

Regarding Thursday’s incident, he said: “This section of road is a difficult one for cyclists as most of us are simply travelling too fast for the pavement cycle path, and the lane itself is narrow and has the pedestrian islands.

“I first became aware of the driver whilst watching traffic coming up for an overtake in my mirrors, and I judged that he would attempt to overtake me through the upcoming pedestrian refuge.

“I signalled right, and let there be no mistake, this is a very obvious right signal, not a waving through. I like to think I make super obvious signals, and I find it hard to believe that anyone could mistake a right arm out as waving them through. This was enough to get him to brake and back off.

“This is when he chose to come alongside and too close to me and offer advice about riding in the cycle lane. Had he instead chosen to overtake as all the other cars did, I doubt I'd have bothered to upload the video.

“I didn't report him to Roadsafe as this is fairly minor, but had I done so I'm reasonably sure they would have written him an educational letter.”

We asked CyclingMikey why he uses cameras to record footage of examples of bad driving – and, it should be said, cycling – he said: “I'm one of thousands of cyclists who use cameras to educate and improve driver and cyclist behaviour.

“As more and more drivers realise that so many of us are filming, they begin to take more care around cyclists generally. It's no different to all the Russian drivers using dashcams, a natural reaction to bad driving and bad justice.

“I have a playlist of repeat ‘customers’ who generally considerably improve their behaviour on the second encounter,” as happened with those taxi videos linked above.

He added: “I can't imagine ever needing to or wanting to use a camera in the Netherlands.”

Last week, we reported how helmet camera footage from cyclist Dave Brennan had led to a Glasgow driver pleading guilty to four charges including dangerous driving.

In its article, This Is Local London has asked motorists who have had what it describes as an “altercation” with CyclingMikey to get in touch with it.