The London Bike Show is in full swing and you've read part one and two of our highlight articles, here's our third and final wrap-up from the show. 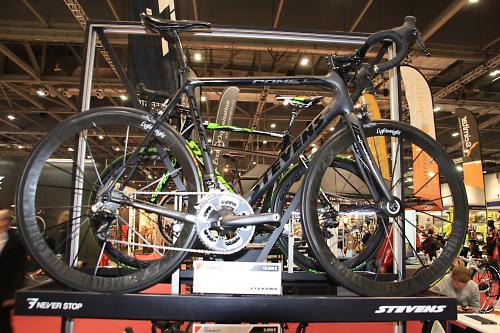 A bike show isn’t a bike show without a super-light bike. German outfit Stevens duly obliged with their Comet SL - decked out with the usual array of so light it’s barely there finishing kit from the likes of Tune and Lightweight - it grazes the scales at a claimed 10.8lb. And that 10 getting on for 11(well, 11) theme continues in the price tag except with the unit of measurement being thousands of pounds of the currency variety.

While the Comet might be out of most people’s price ranges we’d have to say there were some pretty competitively priced bikes on the Stevens stand, we were particularly struck by their aluminium cross bike which looks a real bargain and is on our ‘to test’ list.
www.stevensbikes.de 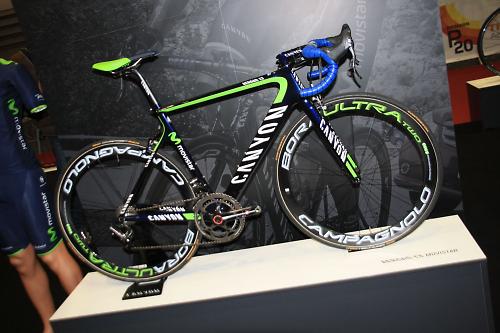 Canyon are a German outfit that these days needs no introduction to UK consumers when it comes to providing technically sorted and fiercely well priced machines. Centrepiece of their stand was the recently unveiled Movistar Team Issue version of the Aeroad CF, which as the name suggests is the Aero Road Bike in Canyon's line up. Movistar will also be riding Ultimate CF SLX 9.0 - winner of the Best Value Bike gong in our Bike of the Year Awards and right up there at the top of the tree when it comes to all out performance bikes. 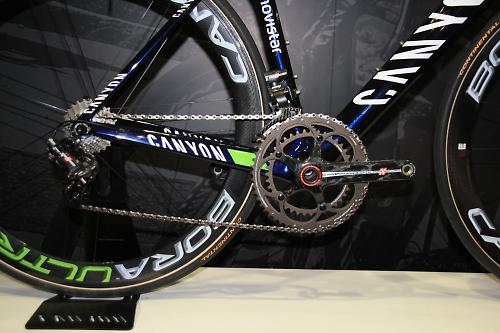 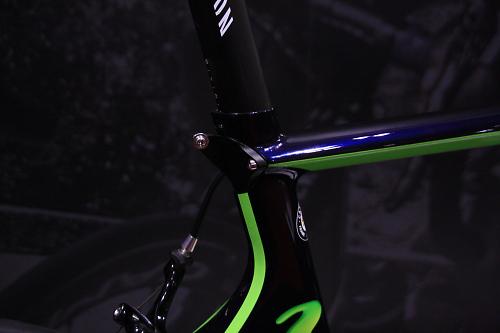 The Team Edition of both the Aeroad and the Ultimate come with the latest generation of Campagnolo Super Record EPS, matched up to a Campag Bora wheel set. The show bike had a nifty race number bracket too, not sure if that comes as standard tho, be good it if did. Sadly the Movistar version of the Aeroad CF isn't available in the UK, the Ultimate is though and it will set you back £7,299… a lot of money but for what you’re getting also a bit of a bargain. 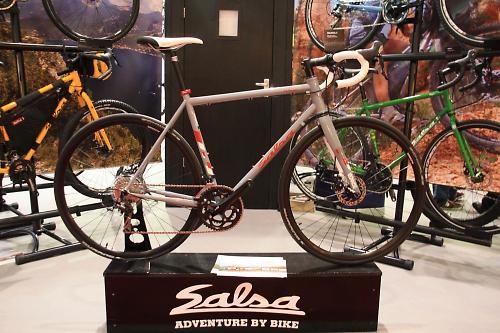 We mentioned in our show preview that Salsa’s Collosal 2 and Warbird 3 - all day road bike and gravel racer respectively - ticked a lot of our boxes and floated several of boats etc etc. So naturally we popped along to see their latest incarnations. 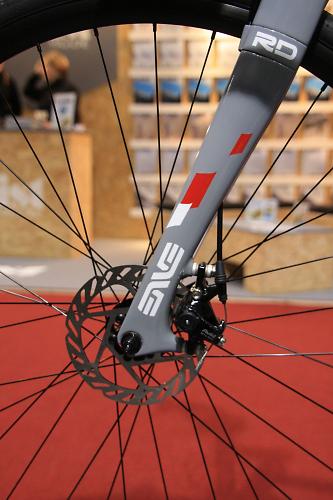 The Colossal 2 is a handsome piece of work - even in not to everybody’s taste Stormy Grey. Definitely an opinion divider that one, and while we’re in a niggly mood we’d probably also chafe a little at that two grand price tag for a Shimano 105 equipped steel bike with mechanical discs… but then the proof of the pudding is in the riding, and we haven't ridden it. One other thing that caught our eye, or more accurately didn’t, was the lack of mudguard eyelets on an all day adveture bike billed as crit racer meets tourer - it must have been something to do with the weather. That might be fine for sunny California we’re no so sure for soggy Britain. Of course you can use clip-ons but… 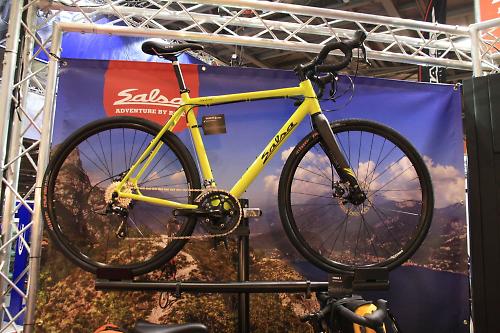 The Warbird doesn’t have mudguard eyelets either, then again it doesn’t have a brake bridge - which if you think about it is logical on a gravel race bike where maximum tyre and mud clearance is going to be a good thing. And should your big day out on the gravel go awry search and rescue should have no trouble spotting you with that zingy colour scheme. I would really like to test one of these.
www.salsacycles.com 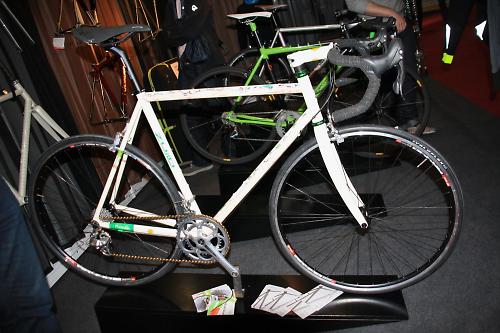 More classy steel on the Mosquito Bikes stand where you’re always guaranteed to spot some interesting exotica. The first bike to catch our eye was this Zullo Panta Rei with it’s eye-catching paint job. But before we talk about the paint let’s talk about the bike. Made from Columbus Spirit tubing it’s designed to be light enough for racing or sportive riding… either would certainly be brightened up with a few bikes looking like this on the start line. 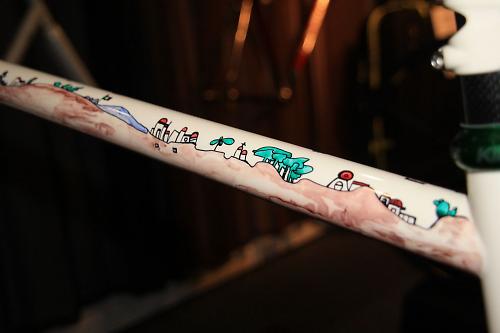 The cartoonish graphic on this bike put us in mind of Dario Pegoretti’s work. In fact Tiziano Zullo has been making bikes longer than Pegoretti - the Dutch TVM team rode Zullos back in the late Eighties and early Nineties. Like Pegoretti these days he’s very in to the graphics and paint jobs that adorn his frames. Tone and I both particularly liked that painted stem. 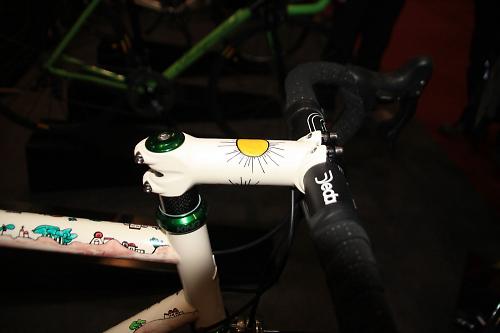 Also on the Mosquito stand check out the Independent Fabrications CX - Ti/carbon dream bike and another really interesting steel bike made from Columbus Zonal tubing by Hungarian frame builder Dániel Merényi - all his bikes are built fully custom to order. 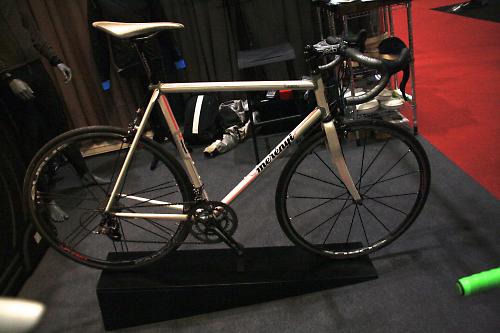 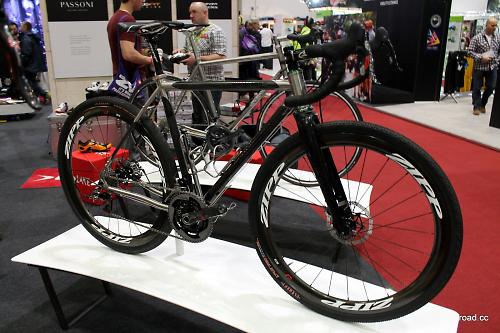 Makers of some of the finest titanium bicycles, Seven showed their Evergreen Pro at London Bike Show. It taps into that gravel racing popularity in the US, with a bike designed to cut it equally on the Tarmac or the dirt road and paths. 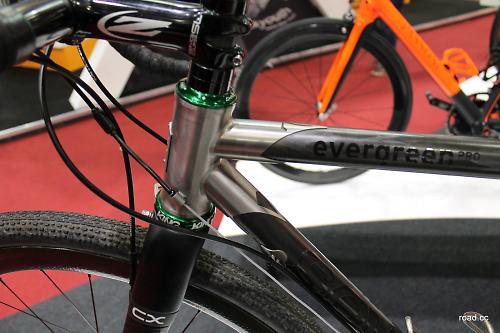 So naturally it has disc brakes on a frame made from a combination of titanium and carbon fibre, seamlessly blended together and draped in only the finest finishing kit. They do other frame materials too; steel, titanium in both plain gauge, double butted and ultra butted. The titanium lugs are laser cut and the frame weighs a claimed 1,170g (2.6lb). 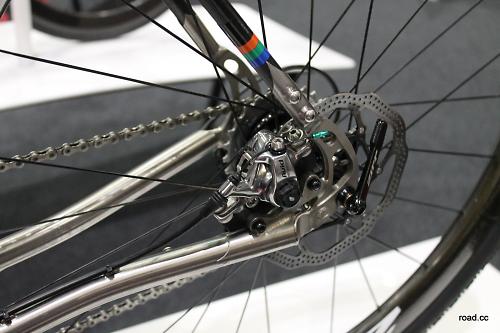 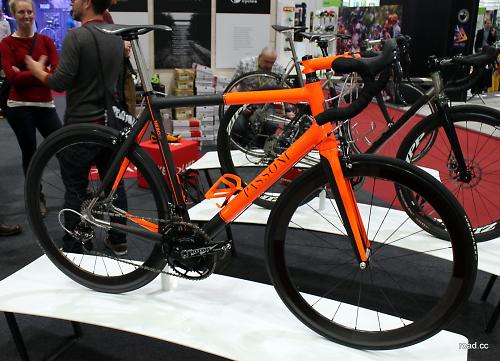 In 2012 road.cc tested the Top Force W from Passoni. It’s still to this day the most expensive frame we’ve ever tested, at a staggering £5,500. This Nero XL, on display in London currently, is an equally exoctic looking bike. 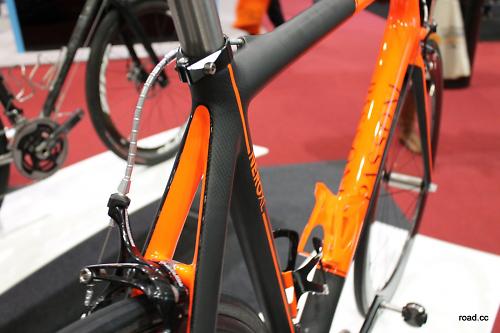 Made from T800 hi-mod carbon fibre tubes put together using a tube-to-tube process, with the dropouts, brake bridge and bottom bracket shell being CNC machined 6/4 titanium. Everything about it screams speed (and humongous price tag), from the hugely oversized tube diameters to the orange paint finish. The down tube a 50mm diameter tube, the top tube is 42mm and the oval chainstays are 24mm. 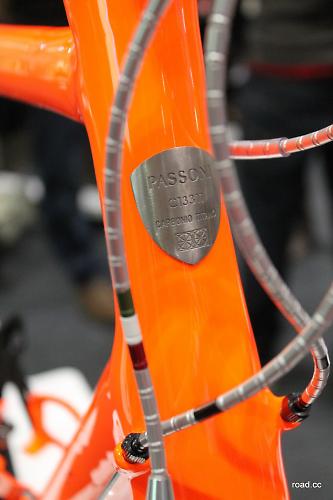 An engraved titanium head badge is a lovely touch. 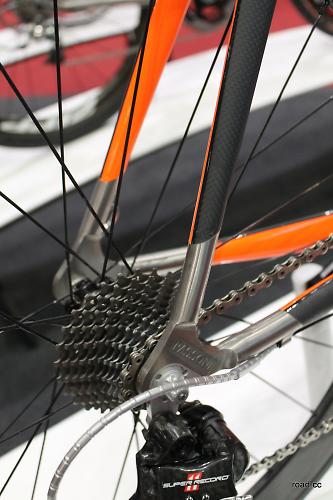 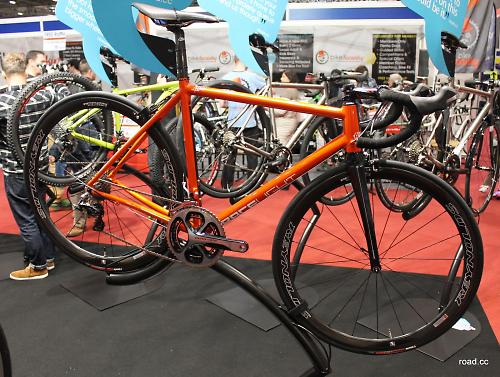 Remember the bright orange Aithein from Kinesis we exclusively showed you a few weeks ago? Well you can see it for yourself at the show, because it’s taking pride of place on the company’s stand. 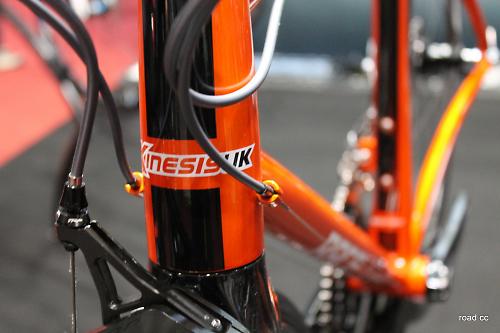 The choice of finish reflects a new confidence for the brand in recent years, with ever bolder colours across the entire range of frames. The decal design is also much sharper, the graphics on the Aithein understated, clean and providing a high quality appearance. And, at just 6.8kg (14.99lb) for this Dura-Ace build, it’s darn light for the money. Oh, that’s right, it costs just £649 for the frame and fork. Performance at an affordable price. 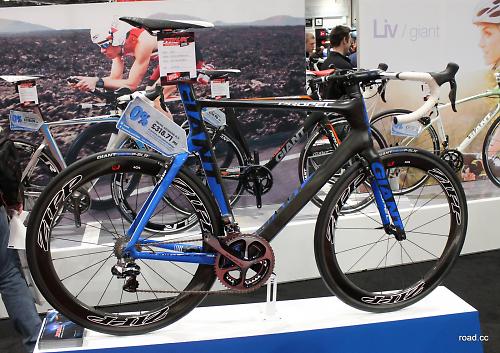 Giant launched the Propel, the company’s first ever aero road bike, at the Tour Down Under last year. It’s touted by the company as the fastest aero bike currently available. They would say that though wouldn’t they. It sure looks fast on the stand here though. 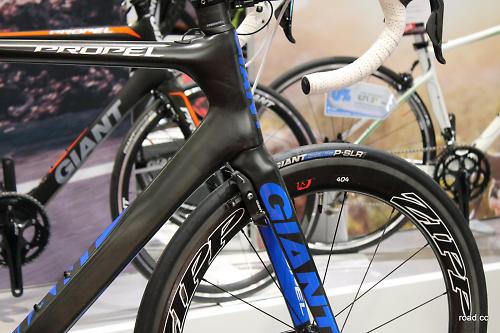 Key to the frame is the AeroSystem Shaping technology that is the result of Computational Fluid Dynamics (CFD) research and wind-tunnel tests. Every tube has been carefully shaped, with a teardrop shape in evidence wherever you look. Interestingly, it’s clear the downtube has been shaped with a water bottle in mind. It’s flattened to a degree roughly where the water bottle normally protrudes from the sides of a conventional down tube. 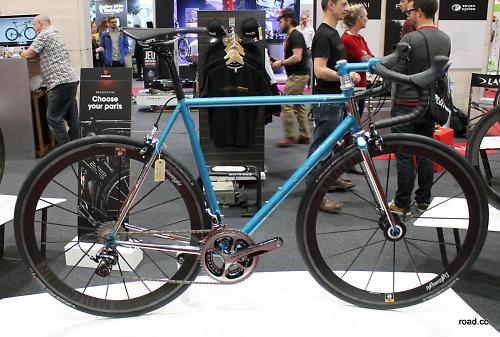 Saffron won the ‘Best Utility’ award at last year’s Bespoked Bicycle show with a mudguard-equipped belt-driven city bike, but at London Bike Show they were showing this delightful £9,380.82 build. 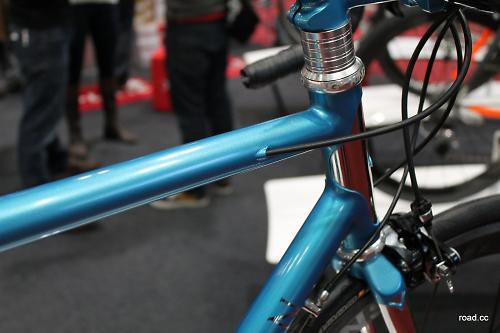 Matthew Sowter is the man behind Saffron and sure knows how to create a masterpiece of a bicycle, this was one of the finest bikes in the whole show. This one is made from Reynolds 953 stainless steel tubes, and was actually commissioned by CycleFit. You can see the story behind it, and the reason for the colour choice (a car was the inspiration) on their blog. 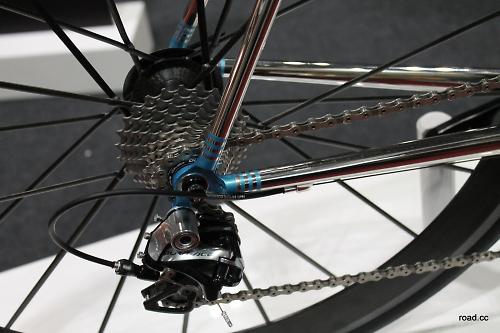