The Storck Aernario Platinum Edition is a new race bike that the German company reckons is lighter and stiffer than the existing Aernario, and it has been praised to the skies by pretty much everyone who has ridden it so far. It’ll cost you the better part of 10 grand, but let’s not dwell on that trifling detail for the time being.

The Aernario is Storck’s road bike with ‘sectional aerodynamic shaping’ and it’s available in several flavours including the disc version that we saw at last year’s Eurobike show. 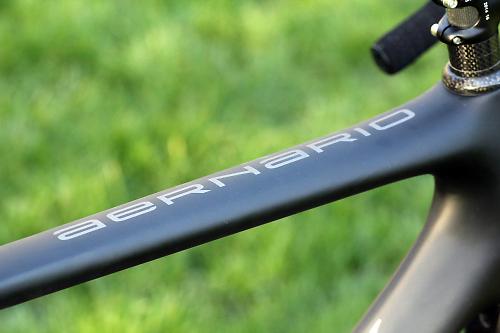 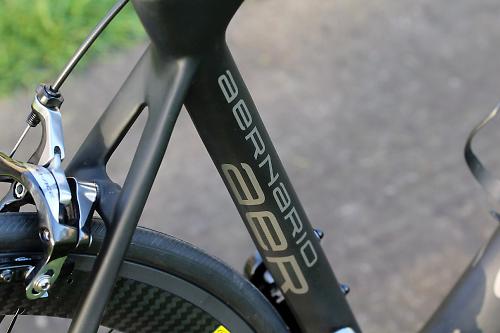 For the record, Storck give a frame weight of 890g upwards for the Aernario G1 (depending on size), whereas this Aernario Platinum Edition is from 790g. You can reasonably say that anything under 1,000g is very lightweight (yes, it’s a pretty arbitrary cutoff). Get down to sub 800g and we’re talking seriously feathery. Storck’s Stiletto 280 fork weighs in at – you’ll never guess – 280g. The clue was right there all the time. The Stiletto 300 fork that graces the front end of the Aernario G1 is, as you might have worked out, 300g. That gives you a combined frame and fork weight of as little as 1,070g. I’m going with the term ‘mega-light’ to describe that. Our complete bike as shown (no pedals) hit the road.cc Scales of Truth at 6.8kg. That figure might ring a bell with you. It’s the minimum weight limit for UCI sanctioned racing. The frame, right down to the dropouts, is made from high modulus carbon fibre using what Storck call ‘the most advanced resins’. How has Markus Storck made the Platinum Edition lighter and stiffer? Well, the ‘lighter’ bit is easy: you just take material away. Increasing stiffness at the same time is the tricky bit, and Storck say this is down to improved butting – in other words, putting the carbon fibre exactly where it’s needed for strength and rigidity. The head tube is tapered, as is the case with most top-end performance bikes these days, although it’s not as massively oversized as some, coming with a 1 1/8in upper bearing and 1 1/4in at the bottom. The all-carbon bottom bracket is PressFit 86.5. 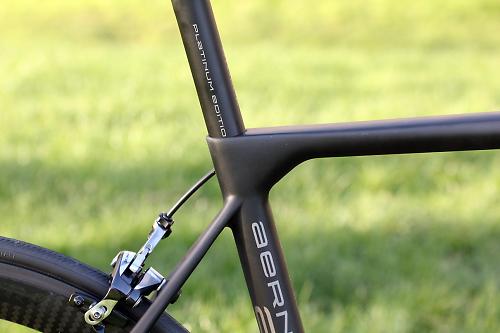 As mentioned up top, the tubing is designed to be aerodynamic so you get highly shaped profiles such as a teardrop down tube, for example, and slim, squashed seatstays. The seat clamp is hidden away to reduce drag too. It’s an internal design that you tighten via a bolt in the underside of the top tube. Apart from anything else, it adds to the clean looks. 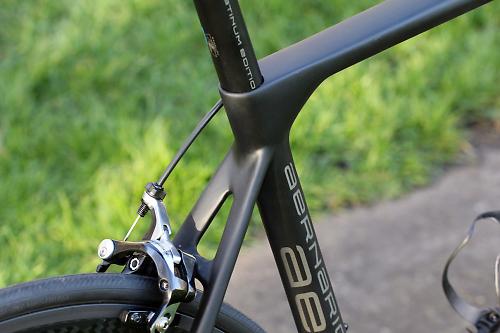 Aerodynamics aside, the other thing you need to know about the tubes is that they’re proportional to the frame size. A 51cm frame will have tubes with different wall thicknesses, diameters and butting to those of the 57cm frame we have here because the frame will be stressed very differently. This isn’t something that’s unique to Storck, but it’s good to know all the same. 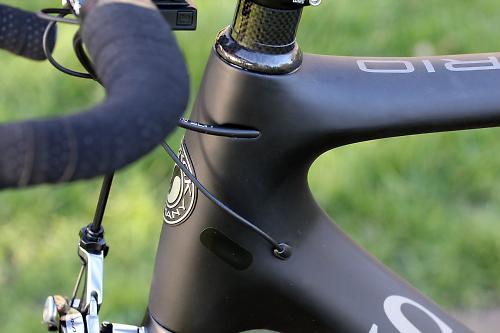 While we’re talking about the tubes, a quick word on geometry… The Aernario Platinum Edition is a race bike so it’s built appropriately. Our 57cm frame has an effective top tube of 576mm, a down tube that’s 520mm (short because of the sloping top tube), and a 162mm head tube. The frame angles are both 73.5° – so it’s an aggressive setup. If you work in stack and reach, they’re 574mm and 406mm respectively. All of these measurements are exactly the same as those of the other Aernario models. As for the componentry, it’s Shimano Dura-Ace Di2 throughout – well, you’re not going to stick any old groupset on a bike like this, are you? The wheels are Mavic’s 52mm-deep Cosmic Carbon SLEs while the handlebar and stem are Storck’s own. So is the 31.6mm Monolink MLP 150 seatpost which is topped with a Selle Italia SLS saddle. The complete bike in this build is priced at £9,499. The frame is £4,799. And yes, we know that not too many of you will be in the market for a bike at this price, but even if you’re not, it’s nice to check it out anyway. As you can imagine, we’re pretty excited to get out on the roads to find out how the Aernario Platinum rides (it’s a dirty job etc). We’ll report back as soon as we’ve got the measure of it. 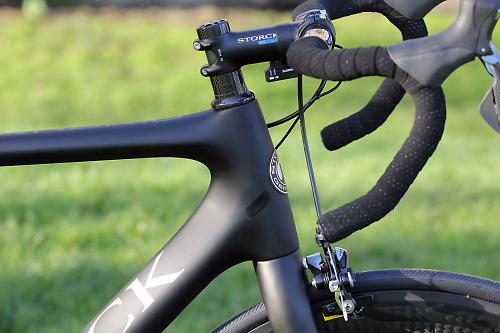 In the meantime, find out about the entire Storck range at www.storck-bicycle.cc.

1
Highway Code changes aimed at protecting cyclists to become law next month
2
Bike commuter fined £80 for breaching PSPO says ‘no cycling’ signs need to be clearer
3
Look mum, no hands! Frank Lampard caught on camera by Cycling Mikey allegedly juggling coffee and phone at wheel
4
Five cool things coming soon from Black Inc, Met, Koo, 7mesh and Moon
5
Cyclist shot by hunter who says he mistook him for a rabbit
6
Car wing mirrors studded with spikes reported to Greater Manchester Police
7
Reaction as Transport for London pauses See their Side ad campaign following backlash
8
Rural A roads are where cyclists are most likely to be killed, road.cc analysis reveals