Disc brakes were the major talking point at Eurobike. Will or won’t they be the future of road bikes? Will the UCI ever approve them? And just how many manufacturers will adopt discs in their road bike range? There were quite a few, as it turns out. One of the most significant bikes is Storck’s Aernario Disc.

While most disc brakes have been appearing on road bikes intended to offer versatilty of function or following the endurance/comfort design blueprint, this is a fully fledged high performance road bike that goes well below the UCI's 6.8kg weight limit. This, in my opinion, is the future of road bikes.

With its bolt-through axles front and rear, hydraulic disc brakes, aero carbon frame and 6.3kg weight, it points to a future where disc brakes can offer a performance advantage. Storck have always been at the forefront of carbon technology, producing some of the lightest bikes since they launched in 1995. The new Aernario Disc has been a complete ground-up redesign and a key feautre is the use of bolt-through axles at both ends.

What are bolt-through axles? They are a large diameter hollow axle which thread into the enclosed dropout. They’re commonplace on mountain bikes where long travel suspension has seen them become a necessity with the extra forces involved. We saw a few road bikes with them at Eurobike, but the majority of the disc road bikes had regular quick release axles. 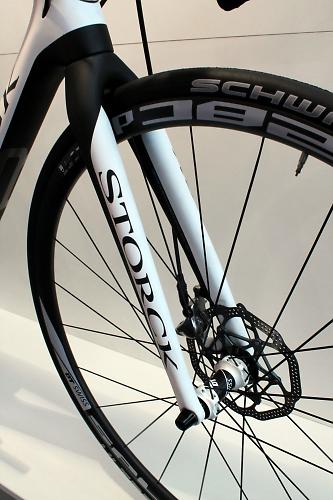 The key advantage, Markus Storck explained to us, is the extra stiffness they offer. They allow the fork and rear stays to be designed with fewer layers of carbon fibre, because the axles provide a lot of the necessary stiffness. So there's less carbon in the sides of the fork legs and in the seatstays and chainstays. That's good because it helps to keep the weight down. The frame is 940g – about 40g heavier than the regular Aernario – while the fork is about 440g – a 100g increase. With regular quick release axles the weight penalty would have been higher simply due to the fact that more carbon would have been necessary. A side benefit to the disc brakes, according to Markus, is that the ride comfort can be tuned. The rear stays are already very slender and with the absence of a few layers of carbon because of the beefed up axle, and the removal of the brake bridge, the stays can actually offer more vibration damping. Ride comfort is a quality that is increasingly being sought with the advent of the ‘endurance’ road bike category. All that, and the Aernario Disc is an aero bike too. The down tube profile, a rounded frontal surface area with a teardrop tail, was developed using CFD (computational fluid dynamics) software. This cross-section, which they call ‘Sectional Aerodynamic’, has also been designed to provide vibration damping while still maintaining a high level of stiffness. Other aero nods include the integrated seat clamp and internally routed cables and hydraulic hoses. The frame is compatible with both mechanical and hydraulic disc brake systems.

So, one of the most interesting road bikes at the show and one I'm keen to ride as soon as I get the chance. Disc brakes on road bikes are clearly a devisive subject, based on the feedback from road.cc readers. Markus sees a future where disc brakes will be offered alongside caliper rim brakes, giving cyclists the choice to pick the braking system they want. This is echoed by Colnago's new CX Zero, their all-new carbon road bike designed from the outset to be offered with the choice of braking systems. So if you don't like disc brakes on road bikes, don't worry, it looks like there'll be plenty of choice for all.