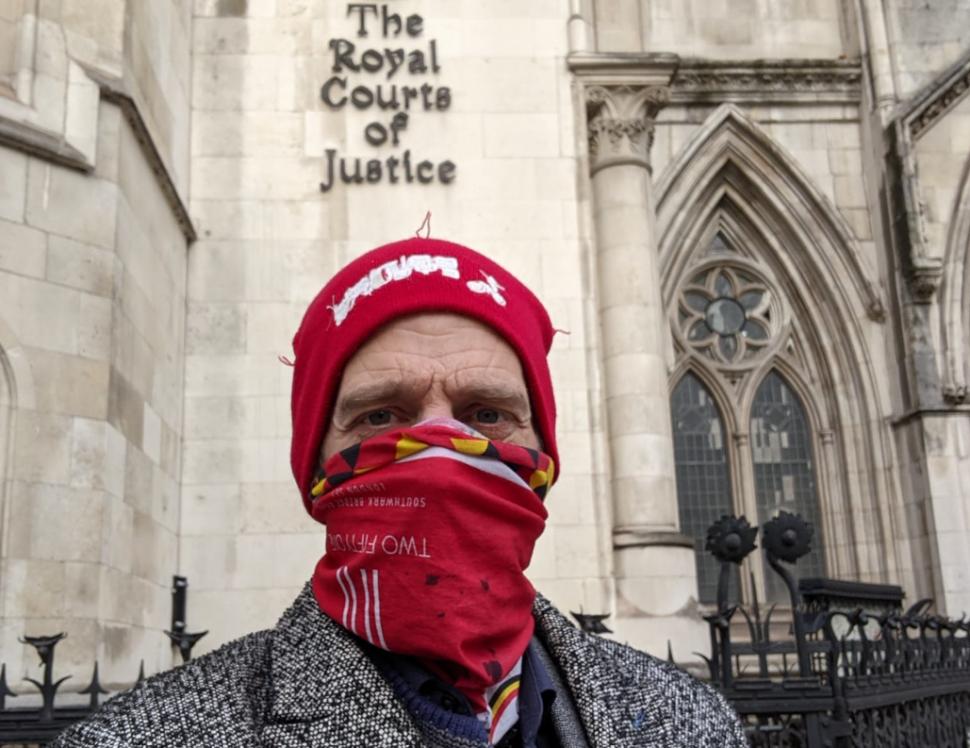 One-time London bike courier Caspar Hughes, who went on to found and run the static track bike racing events company Rollapaluza, has diverted his energies in the past few years to campaigning for safer roads for cyclists and, more recently, trying to avert the looming climate catastrophe.

Here, he shares with road.cc readers his journey from courier to campaigner – as well as explaining why he is willing to risk jail to fight for what he believes in. Over to Caspar ...

Earlier this week, I experienced my first visit to the Royal Courts of Justice. It’s an amazing building and very different to my only other experience of courts in the UK, St Albans Magistrates’ Court. I was there to challenge three injunctions from National Highways and Transport for London (TfL) against Insulate Britain).

The injunctions in question include a long list of roads in and around London on which persons named or unknown could be arrested if they take part in any action that slows or disrupts traffic.

So why was I – someone who has been arrested four times in the last three years whilst taking part in peaceful direct action for Extinction Rebellion – in court challenging TfL’s injunctions against Insulate Britain?

It started in 2015 when I was running a cycling events company called Rollapaluza, a period on which I look back with fondness.

I remember reading an article on BikeBiz written by Carlton Reid questioning why so few people in the cycling industry were involved in campaigning. I wondered why I wasn't more involved personally.

A few days later I stumbled upon a bunch of cyclists doing something at a junction on Denmark Hill. I stopped and hung around for a few minutes, asked a few questions but didn’t really learn much. I later realised it was a Die-In for Esther Hartsilver who had been killed at the terrible junction of Orpheus Street and Denmark Hill – a junction that hasn’t changed much since, and six years later it’s still as dangerous as it was back then. 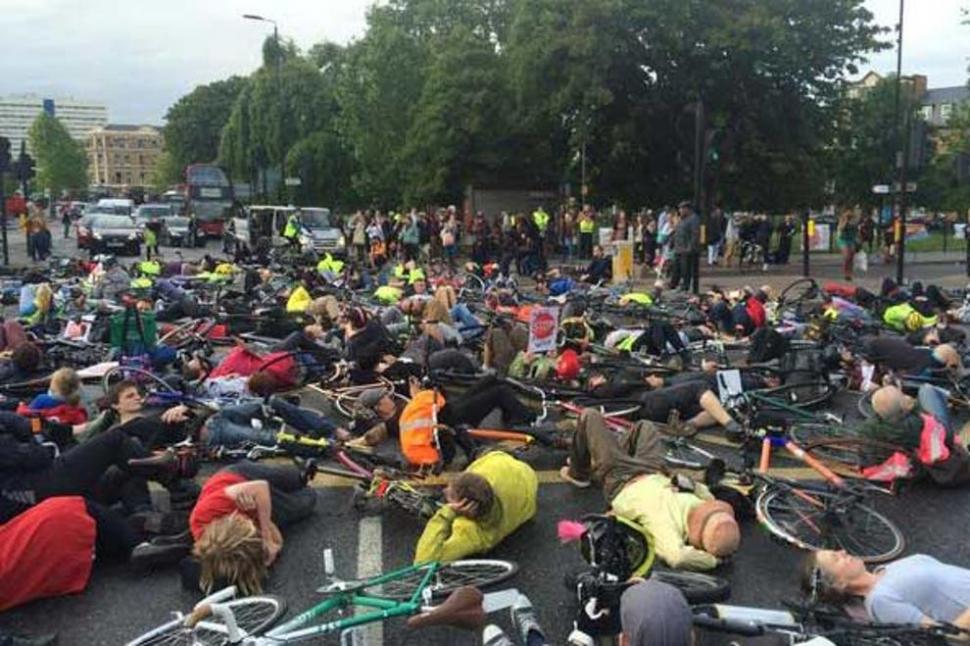 I started to read up on the campaigning landscape and quickly realised how much of a role active travel had to play in making certain roads in cities safer, less polluted and less congested, alongside improving people's physical and mental health.

I also learned that since 2015, transport has been the largest greenhouse gas-emitting sector in the UK.

One of the fundamental ways to reduce emissions from this sector is to prioritise active travel and public transport over private car use. It is currently socially acceptable to take 1.5 tonnes of metal with you to the shops to buy a pint of milk, loaf of bread and a newspaper. This has to change – and change fast – if we are to avoid civilisational collapse in the coming decades.

The comparison between most UK and Dutch cities in particular was amazing.

Two per cent of children in the UK cycle to school; 50 per cent of Dutch kids cycle the same journey, developing a routine of activity from an early age.

This habit makes them far healthier than we are, despite the Dutch love of covering anything in batter, deep frying it and sticking it in a vending machine so it’s available 24/7.

A third of all journeys are cycled in the Netherlands, including by people cycle deep into retirement. Over here, it’s still hovering around 2 per cent. Outside pockets of London, only Cambridge comes anywhere near Dutch levels of cycling.

I was living in Tower Hamlets when I learned of Ying Tao’s death and the Die-Ins that followed.

I turned up to the first one, organised by Stop Killing Cyclists, and I was taken aback by two things.

The first was that there appeared to be hundreds of people hanging around long before it was meant to start – it was far, far bigger than what I had seen in Denmark Hill.

The second was that people were fretting because the PA they’d hired didn’t work, I noticed that the problem was a missing lead to connect the mic to the PA, I knew there was a shop that sold the missing lead locally and one of the volunteers kindly took instructions about what lead to buy and where to go, whilst I started setting everything else up.

That was the first direct action with which I got involved. Since then I’ve helped a small team of volunteers set up and run far too many Die-Ins with Stop Killing Cyclists, and I’ve regularly been brought to tears speaking to people who’ve lost family members because drivers killed them. 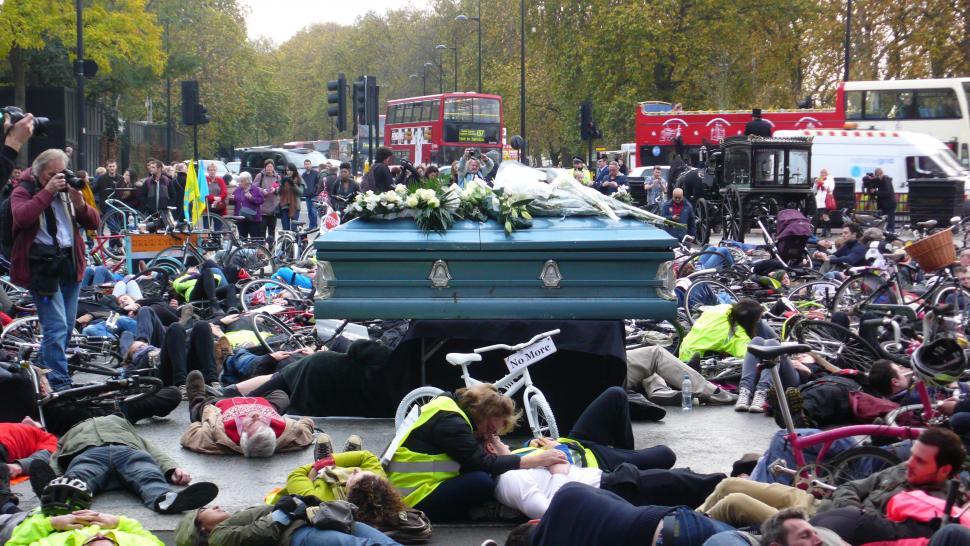 I successfully managed to arrange and help negotiate support from Cycling UK, London Cycling Campaign and Extinction Rebellion who generously supported some of our actions that were increasing in their disruptive elements.

In 2016 I moved out of London, back to the West Country. Whilst I was still active with Stop Killing Cyclist my focus turned to my new adopted city of Exeter. I was fortunate in that there was a Cycling Campaign starting in the city in the same year I moved in.

Exeter is tiny – half the population of the central London borough of Tower Hamlets, but spread over twice the area.

Thankfully there are far fewer deaths despite cycled journeys being three times the national average at 6 per cent. But they do happen, about one person walking or cycling is killed in Exeter every other year.

It took me five years to persuade Exeter Cycling Campaign, who are naturally far more conservative (with a small ‘c’) than London’s Stop Killing Cyclists to organise a Die-In.

I did so by explaining that whilst Die-Ins are a form of disruptive direct action, first and foremost  they are a ceremony; we pause the hustle and bustle of daily life with a poignant couple of minutes’ silence, whilst we lie down in the road, often where the fatal crash happened, to mark the passing of someone who has been killed by a driver.

Sometimes it’s a teacher, sometimes a nurse, a doctor, a cleaner, a cycle courier … it doesn't matter what they did for a living, they were killed whilst cycling on the roads where it should be safe for us to travel. 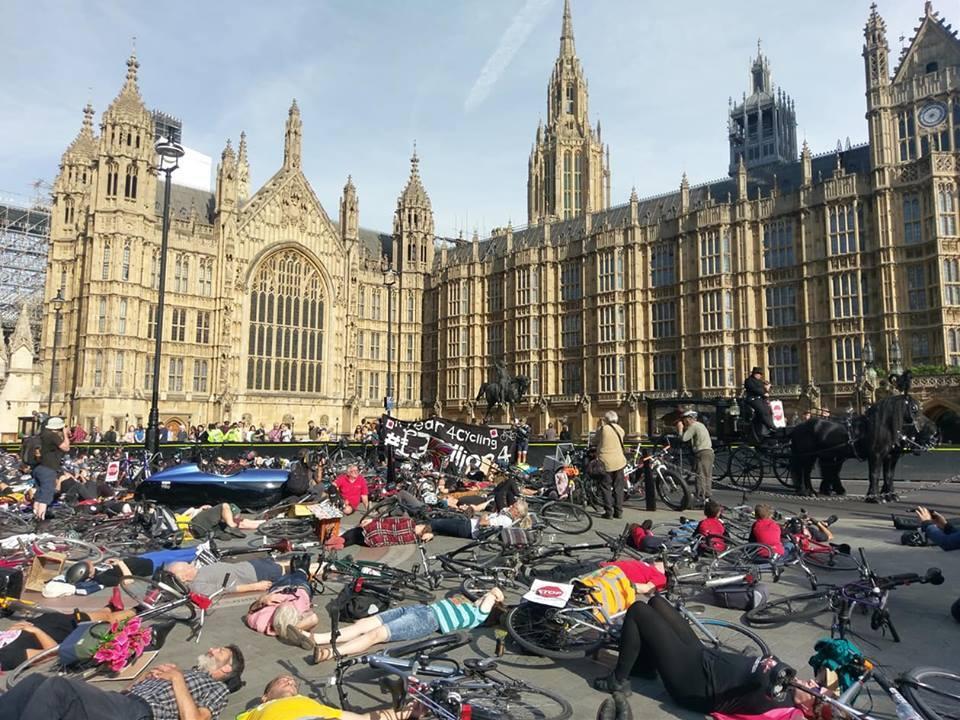 I’d estimate that around 90 per cent of these ceremonies were attended by family members of the victims, and often they will speak at these commemorations of their loved ones’ passing … if you’ve ever been to a vigil where that has happened, you’ll know how quickly your eyes can well up listening to them.

Which brings me back to the top. The injunctions that National Highways and TfL brought against Insulate Britain were written in a way that could have included many of the people I’ve written about above. Until our challenge, these injunctions could’ve been interpreted in a way that these people could have faced unlimited fines and up to two years in prison.

I know that the direct action we’ve taken has been effective. Boris Johnson’s mayoral team said that the Stop Killing Cyclists direct action did two things – it generated the conversation amongst the general public in London that protected cycling was a solution to the number of people being killed whilst cycling, and it lit a fire under their administration to deliver the start of the protected cycling network we are seeing emerge in London. 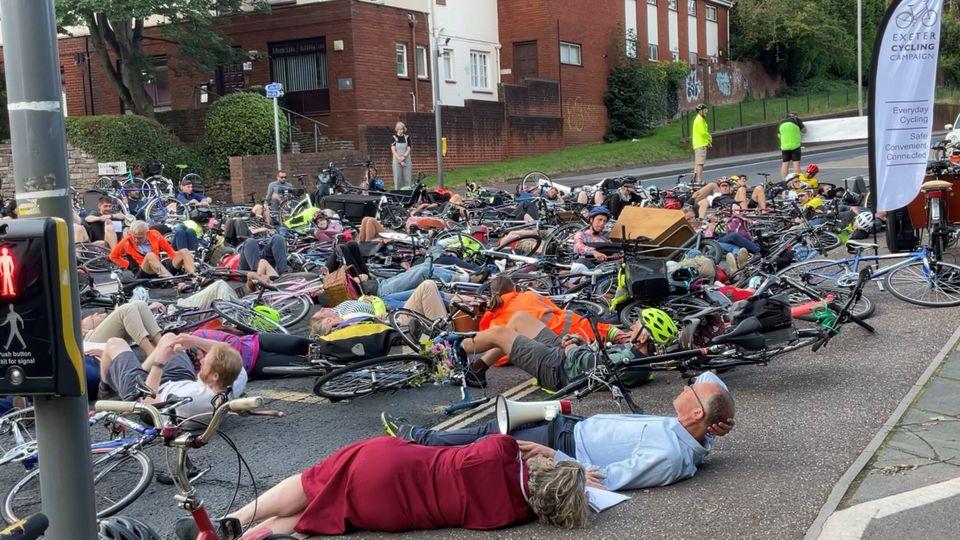 In Exeter, our initial peaceful direct action led to a meeting with the Police Crime Commissioner, despite her initial reaction being to tell us we were lucky our vigil wasn’t disrupted by anarchists. The Exeter Cycling Campaign regularly meets local government and have recently met with the local Police Service lead for road traffic collisions.

It’s a necessary part of a functioning and healthy democracy, which is why it is important these injunctions were – and will continue to be – challenged.

1
"They said give us the bike or we stab you": Another cyclist targeted by motorbike-riding muggers on popular route out of London
2
Near Miss of the Day 793: No action for driver overtaking into oncoming traffic (+ interesting Operation SNAP feedback)
3
Near Miss of the Day 792: National Express bus driver in ultra-close pass on cyclist (includes swearing)
4
Would you like to see the crazy Cadex tri bike in the Tour de France? Plus new stuff from Elite, CeramicSpeed, Santini, Bollé, MAAP & more
5
How does this work!? Crazy half-wheeled bike concept goes viral
6
Tour de France Gilet-gate: Geraint Thomas explains how he forgot to ditch body warmer for Copenhagen TT
7
Lone female cyclists are “being targeted”, says former Scottish champion
8
Cyclist killed after being struck by van driver during time trial