On the trail of Nessie

I'm rounding a corner about a fifth of the way around this year’s Etape Loch Ness sportive when a large shape hoves into view. It looks like a massive black lemon with flippers, a small head perched atop a giraffe-like neck. As it drags itself across the road, dripping with water and trailing mud and bits of weed, it cranes high up the cliff on the right-hand side, to nibble at some foliage. I'm going quite fast when I encounter Nessie, so my only option is to dodge under her mighty neck. She smells like the seaside.

Unusual as it is, encountering a mythic creature in the flesh*, I have a ride to finish, and it is rumoured The Hill is coming. By strange coincidence I cycled up said Hill the previous week, when I rode the Caledonia Way, and frankly it has troubled me ever since. Unlike last week, I won’t have an e-assisted mountain bike to help me up what I now recall as a steep and unremitting ascent.

Unprepared and (un)ready to ride

What's more, I had barely trained for the 66 mile (106km) Etape Loch Ness sportive. Until a couple of days before, my carbon road bike displayed numbers from my last mass road cycling event, RideLondon 2016. 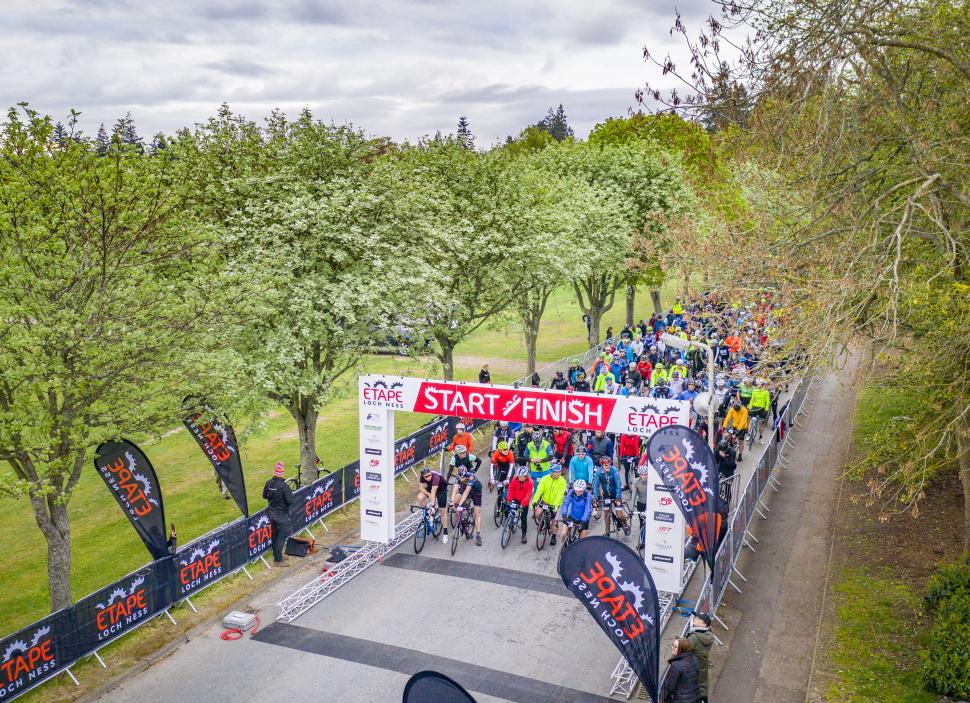 I'd had two consecutive 5.15am starts (the first for yesterday’s train), and arrived to the start wave a bit late and quietly cursing my way through the assembled riders. Also - I’d made an uneducated prediction at my finish time, and everyone around me looked worryingly fit.

Still - I'd heard this ride was spectacular. It was all on closed roads, and 5,600 people would be riding around the entirety of Loch Ness's shores with me.

Excitement trumped nerves as we moved towards the start pen, resulting in a stream of daft chatter aimed at my fellow riders.

The commentary over the speakers appeared to be coming from another time and place partly because, despite repeated calls for woos, previous waves had gone off without any wooing at all. When our time came, I rallied my wave to dispatch this subdued atmosphere and woo for all we were worth. And they did not disappoint. By heck, Inverness heard our wooing.

My starting compadre, David, politely thanked me for perking up his ride start, before pedalling away.

We had our first stoppage a couple of miles in, when a centre line that had been painted over so many times it was now a good inch high, and interspersed with sunken cats eyes, had downed a few riders, and, judging by the presence of the ambulance, ended one person’s day out. Marshals called to riders, most of whom obeyed, to slow down and move left. People were friendly. Chain gangs passed with a cheery hello. By mile 27 I’d been smiling pretty much the whole way. One lady on a heavy-looking hybrid was knocking out the same pace as me, only I’d overtake her on ascents, she’d pass me on descents. By the first fuel stop I was beginning to think I’d underestimated myself. In fact, I’d hazard, I was ready to climb. After polling fellow riders on the best hill strategy I refilled one water bottle to save weight, and shoved a banana and some gels in my pockets.

After dodging Nessie, just outside Fort Augustus we round a couple of corners, and the foot of the 8km long King/Queen of the mountain stage. The Category 2 ascent starts as I remember it with a sharp uptick, 14% at its steepest. For 2km it averages 10%. The road turns a corner, climbing some more - and then some more. 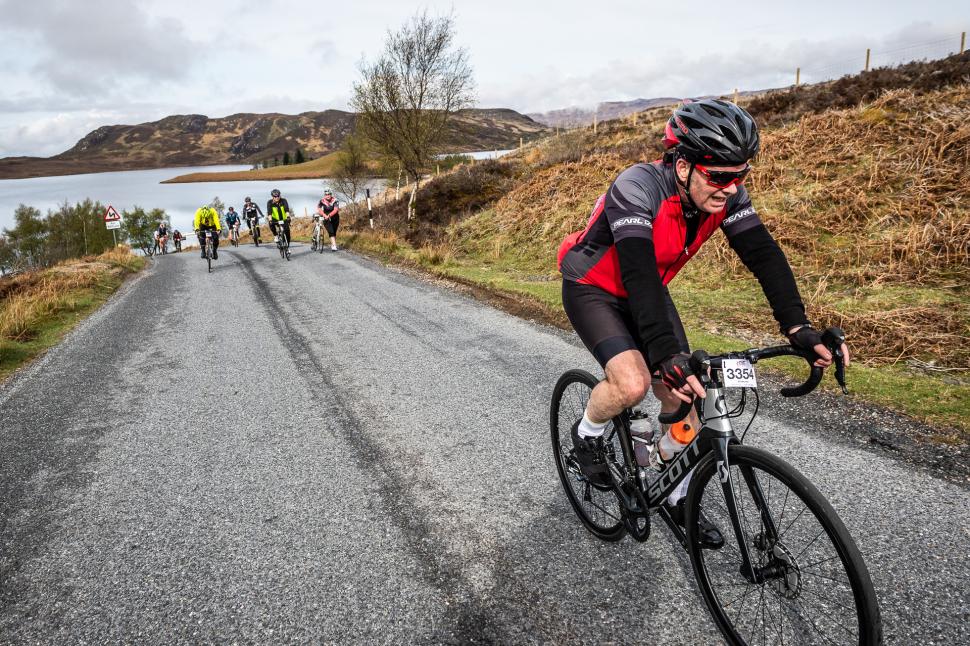 Soon most of us have run out of gears, and the only solution is to keep up the cadence, or get off and push. I’m surprised to be overtaking people, and so hyped up I’m cheering riders I pass like a bad American motivational coach, “we’ve got this” “nailing it” and other phrases which come from I don’t know where. I apologise now to anyone I irritated.

The Hill takes its toll

Some riders are looking ragged by this point, and many have dismounted to push. One woman slowly keels over on her bike as I pass, with a polite “sorry” to the riders behind, who have to go around her. “At least you’re still trying to pedal”, observes one.

We descend briefly, before a flat section where some riders have stopped for a dip in the shallows of a dark loch. There’s one more sudden steep ascent before a final slow, straight drag to the top, which I reach 40 minutes after starting the ascent.

Did the hill! Didn't dismount. Praise be. #etapelochness2019

We are at km 65 or thereabouts, and after that, a sign tells us, it’s all downhill.

At the summit there is an actual bagpiper, in a kilt. 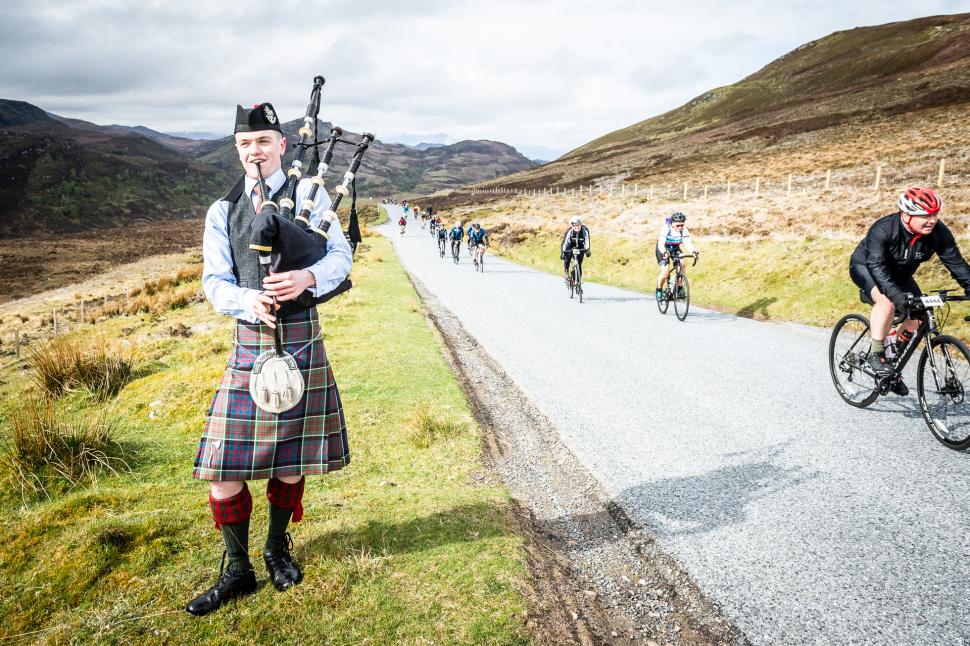 The view is astonishing, it’s rows of brown hills as far as the eye can see. I’m cooling quickly though so after a quick snap, it's time to descend. It’s like a theme park water slide, undulating in a long, straight to the foot of distant hills.

I’m making friends en-route, at feed stations, people I’m playing leapfrog with. A group of men laugh when I sail past them on a slight descent yelling neeeyyyaaawwwm.

Then there is the mighty Loch Ness, which is glass-smooth for much of the day, shining beneath a dappled sky. Occasionally you are startled by it, and a few people stop to take photos of the most picturesque bits of road. In the morning it was smooth under a start-of-the-day haze, as the road hugged its shores, later it ripples between birch trees, before disappearing behind flowering gorse smelling of coconut biscuits, and later by sunlit fields. Although it isn’t strictly ‘all downhill from here’ the road back into Inverness is gently undulating, and free of any significant ascents. 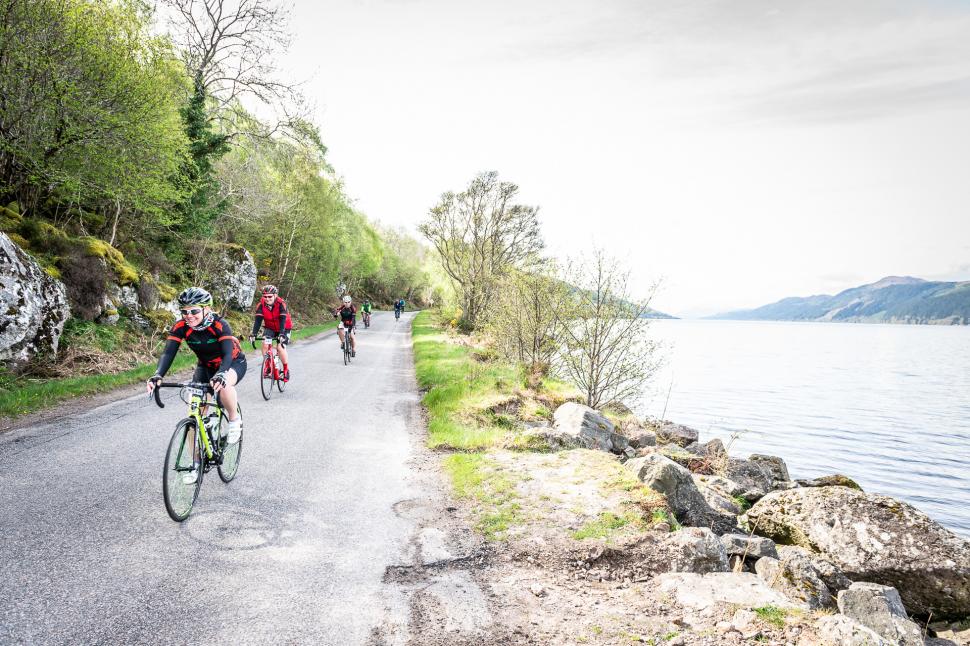 I stop periodically to stretch my back, and after the final feed station decide to give it all I’ve got left. So it is I try to power through the streets of Inverness, crossing the bridge and doubling back to the final stretch, and over the final markers, playing the Chemical Brothers’ Galvanise in my head.

I avoid the beer and cream cakes on offer at the finish line, heading back to my room for a stretch and my recovery drink, which I have thanks to a new friend-slash-sportive-guardian-angel I met on the train.

So long, and thanks for the lift

Not literally a  lift. But a boost in the form of Marius, a kind young man I’d chatted with for two hours on the train to Inverness. He’d helped me with my last minute ride prep, accompanying me to a local running shop for sports snacks, and even fixed the cleats on my shoes, which I’d hurriedly screwed on wonky the night before. He’s with a local cycling club in Edinburgh and clearly taking a far more scientific approach to all of this.

Cycling people are the best. I'm in Inverness for the Etape Loch Ness. Met this kind chap, Marius, on the train, who fixed my shoes. Earlier at Kings Cross a cycling chap gave me some beetroot juice to boost me up the hills tomorrow. Thank you, cycling world, for helping a friend!

He laughed kindly at my lack of prep and, after we’d registered and picked up my gels, we reconvened for supper. He rode the route more than two hours faster than me. Thanks Marius from Johannesburg, you’re a legend.

And thanks Etape Loch Ness for the boost. It was a tough few weeks in the lead-up and there’s something about pushing yourself on a hillside, trying and succeeding where you thought you couldn’t, to make you feel good about yourself. There’s also something wonderfully restorative about riding with so many good-natured people, in beautiful scenery on gloriously traffic-free roads. I can’t recommend it enough.

For transparency: the organisers arranged my ride place, my travel and accommodation - for which I'm grateful.