road.cc rides out to watch the Tour of Britain - video and photos

Yesterday we hosted a ride from the road.cc office in Bath to watch stage five of the Tour of Britain as it made its hilly way from Aberdare to Bath. At precisely 9:41am, a group of about 20-30 people set their navigation devices for an 110km route (the longer of two planned rides) into Wales to watch the racers blur past in dizzying flash of colour, before dashing back to Bath to watch the finish and rounding out the day with pizza, beer and cake. It was a thoroughly enjoyable day. There were smiles all round, the company was brilliant - it was really nice to meet some of the road.cc readers, to ride with them and talk bikes and more. Better still, the ride was all conducted under the most glorious weather, someone had some new tan lines when they got home. And a few lucky people even got to ride a brand new Canyon as well, as part of a little competition we run in the weeks leading up to the event. 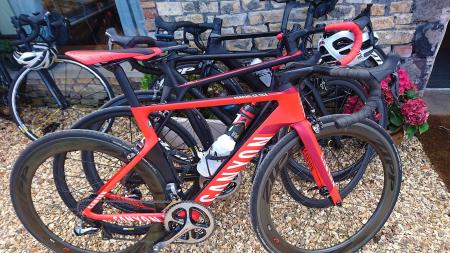 We had road.cc contributor Jez Ash providing the vital navigational duties and doing some sterling work using his local knowledge to lead the ride out of Bath and into the country lanes - amazingly we only had one navigational blunder (that might have been my fault) and the group mostly stayed together all the way into Wales. Mention for Bruce Dalton from Kinesis Bikes too, riding his fat-tyred cyclocross bike with a single ring and providing a useful windbreak throughout the ride and an injection of pace when we sprinted back into Bath.

Heading in the opposite direction of the huge stream of traffic pouring into the city centre to watch the Tour of Britain as it arrived in the historic city we cycled along the quiet and secluded Bristol and Bath Railway Path and out into the countryside, passing a succession of increasingly small villages, and spotting lots of other cyclists with similar plans to combine a ride with some race spectating. Before too long, the Severn Bridge loomed into view, its brilliant white structure prominent against a crisp blue sky.

Somebody had mentioned the bridge was 50-years-old on this day, so we fully expected a celebration of some sort. Balloons. A banner. The major swinging his bell. Something. We were sorely disappointed to find this landmark day hadn’t been recognised in any way at all. Instead, its day will be remembered by me as the time I was almost blown off my bike into the river underneath. It was a tad blowy. I didn't envy Jez with his very deep section carbon wheels one bit.

Surviving the bridge crossing, from here the road took on a much more scenic nature as it rolled and lumped alongside the River Wye, taking us past the impressive Tintern Abby and to our final destination in the shadow of Saint Michael’s Church. An incongruous T-junction, the race approaching the main road via a fast descent might not have been the most impressive viewing spot,  but there was a lovely pub on the corner out so it was drinks, sandwiches and chips all round as we sat and soaked up glorious sunshine and talked bikes and cycle racing. 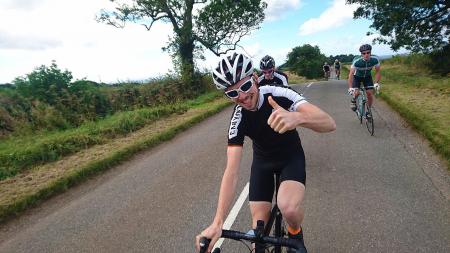 Then a parade of motorbikes, cars and a flash of coloured lycra as the racers whizzed by our spectating point. Cheers and shouts of encouragements, trying to spot known riders a tricky job at the speeds they passed us, and then back to the pub for a final drink, before getting back on the bikes and heading home. Now the plan was to follow pretty much the same route back, but as we approached Bath we had the option of sticking with our prescribed route which would take us right or follow the actual route of the race which we had stumbled upon. Country lanes or closed roads flanked by huge crowds? It was an easy choice.

This decision did see the racer come out in a few of us, and the pace turned up as we made the most of the closed roads, zooming through junctions and roundabouts, and given the impressively large crowd's something to cheer and shout when we all sprinted for the 20km sprint in Pucklechurch. A quick regroup before tackling the last climb of the day, Kelston Road Climb. Not long at 1.2km and only an average gradient of 5% but it’s fair to say we all found it a grind with the stepped nature of the climb making it tricky to find a comfortable rhythm. The descent down the other side was a hoot, however, and we rocketed into Bath, following the route right up to the last 500m before the marshals booted us off the course.

We spectated on the final corner of the finish, a great vantage point as the peloton negotiated the final corner and drag up to the finish line. Then we mingled in the car park housing all the team buses and checked out the bicycles and equipment and watched the racers cooling down, and the massive throng of people surrounding Wiggo’s diminutive camper van.

Then it was back to the road.cc office for lots of pizza and beer, with the riders coming together for the first time since the morning, and much chat until people gradually departed back to whence they came. It was lots of fun, and thanks to everyone who came along and contributed to a really enjoyable day.

Some of the team also used the ride as a final training ride for the Revolve 24 hour event this weekend. You can watch the video update here.