Wen to Wen: This Time It's Epic

When you're planning a ride you may think about who you want to show up. "Well, everybody!" might be the first thought, but of course you can't have everybody: where would you put them?

No, you want the right people. Ideally they will all be comfortable with the pace set by consensus, they will have conversational reserves to last the miles, and they will finish content with their accomplishment, pleasant memories to share. You also want the optimum number to match your organisational skills.

The Wen to Wen was my first group ride, if you don't count the previous two. I'll count them, but with all respect to those few intrepid early adopters who took part, let's call them warm-ups. This time there were a dozen of us; still quite modest (the same number as have walked on the moon). Enough to qualify as my first major expedition.

I advertised here and on a couple of cycling forums. My pitch wasn't Shackletonesque, 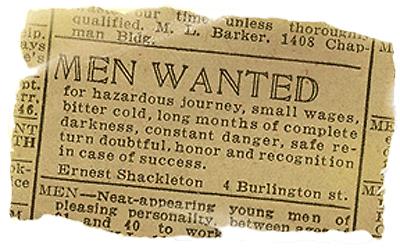 however, I did stress that there would be hills. This was my way of weeding out participants who don't like hills. (You might ask does anybody, really? Some of us hide our masochism better than others.) Essentially I was casting my net for those who were up for a challenge and prepared to pay with what I hoped was a humane amount of pain. And I definitely didn't just want men.

Our cast of characters in roughly the order they arrived at Somerset House: Stuart, me, Russ, Geoff, Terry, Catherine, Kristian, Adrian, Claudine, Mike, Nigel, and Jason.

Geoff and Terry were recruits from our chance meeting at the Dunwich Dynamo; they themselves had recruited Catherine, on her first lengthy ride. Kristian was a veteran from my second warm-up. I'd met almost everyone else on other, mostly nocturnal events, which stymied my facial recognition software such that I couldn't always put names to faces. Apologies especially to Stuart, now a serial victim of my forgetfulness. And to Mike, who may be Nick. Pre-ride jitters can only be blamed for so much.

I handed out flyers with subjective ratings of the hills to come and bailout stations, then we were off into the splendid window of opportunity the weather had afforded, a generous helping of rain having been handed out the day before as it would be the day after.

London isn't everybody's cup of tea, or so I've heard. Personally I'm always enthralled by city miles, but appreciate that for most the quicker they're out of the Great Wen, the better.

A previous incarnation of this ride had been billed as The Magical History Tour. Crystal Palace Park was a good first stop, then: more or less at the dawn of time. There are better dinosaurs to be seen, even in London (the animatronic T-Rex at the Science Museum begs a visit), but none in as peaceful a setting. I think most are herbivores, too. Our next official stop was Downe House, where Charles Darwin lived and worked for 40 years. The humble worm was a speciality of his. The gardens behind the house are inviting to anybody who wants to walk in the revolutionary's footsteps over earth turned by those mighty little labourers.

Not far down the road we passed the house of a man some readers may recognise as a comedian, others as a politician. Then came our first Honest Hill – though anyone who classifies Church Hill in Cudham as a Hill from Hell will suffer no corrections. To borrow a line from the late great Douglas Adams: the first part is the worst. The last part is also the worst. It's the kind of hill you go up thinking "Wouldn't it have been easier for the road builder to move a hundred million tonnes of dirt to even things out?" Cursing also helps despite a lack of scientific evidence for it.

The reward for climbing this staircase is to slide down the bannister a few miles later, Pilgrim's Way (Canterbury being over our shoulders a fair distance) and a lovely but ominous backdrop of verticality to come. There was one casualty. Russ scraped a hole in his jersey as it slowed his unexpected descent after launching himself from a bump in the road. A mini hill, if you will. If his chin had been scalped his beard might have fetched a good price; I haven't seen its like outside of sepia toned photos.

There are, of course, hills in other parts of Britain which Mini-Me these, and actual mountains elsewhere in the world. France springs to mind for some reason 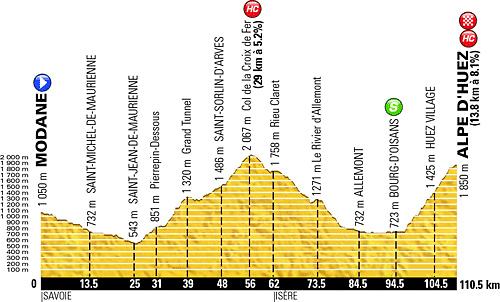 Those mountains would laugh at our Kent and East Sussex anthills if they could. Fortunately they can't, or the taunting would be even worse. This does not detract from the effort it took to ride ours, particularly as there was no public honor, recognition, or reward. Except coffee, which I believe a few took intravenously on that wide spot in the A25 aka Westerham.

Most of us then passed Chartwell, Churchill's home, while Claudine and Adrian went astray through no fault of their own. Believing myself capable of being ride leader, occasional backmarker, and wayfinder, I had fallen short on my commute between those jobs. Fortunately they were perfectly capable of finding their way back to the fold, though I will admit to making a prematurely grief-stricken phone call to ascertain this. I felt especially remorseful towards Claudine, who had come all the way from Wales.

We enjoyed a very fine view of the North Downs from Bidborough before coasting most of the way into Tunbridge Wells and our lunch stop at a cycling cafe packed with Tour watchers. As some of us waited (and waited…) for food, I had a good look at this: 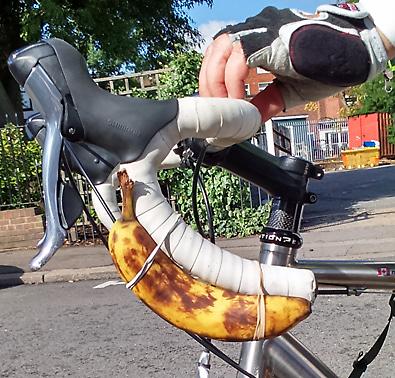 No, not Nigel's perfectly shaped rations. this: 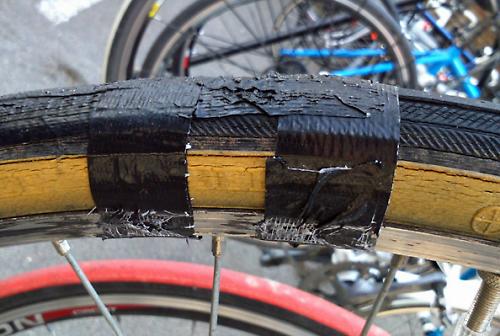 That's right: our own L'Etape du Tour, if you'll pardon the complete translation misfire. You're looking at a tyre with a split casing which has been matter-of-factly mended with electrical tape. This was supplied by a workman at a house we had been stopped outside of while waiting for the unsplintering of our group. Take a bow, Geoff, for the expert use of adhesives, and Terry for braving it.

Speaking of mechanicals, in addition to that delightfully crude yet highly effective repair we counted a split chain for Jason, a rather too derailled one for Catherine, and two punctures, one for Adrian near the start and another for Geoff closer to the end which resisted all efforts to reintroduce rear hub to dropouts until fortitude combined with what may have been black magic prevailed. My own bike started creaking about halfway through and has yet to be diagnosed. It's probably just feeling put out after one too many chevrons.

My original estimate for the ride had been 10 hours, which is 3x as long as it took Chris Froome get fitted for another yellow jersey on another hilly ride. To be fair they had cleared the roads for him. As the sky darkened briefly over T. Wells, so did my optimism at keeping a semblance of a reasonable ETA at Hastings. Which was OK. I wanted people to enjoy this, and getting to watch the end of stage 20 turned out to be a part of it.

We passed Bateman's, where Rudyard Kipling held court for many years, then tackled the last big climb of the day, which culminated in the Brightling Pyramid. This curiosity is the final resting place of another one, "Mad Jack" Fuller, who built follies to tickle his fancy and employ pre-Victorians. We were met there by Jack himself, or a reasonable facsimile, starring in a small production by a history group. It's the sort of thing I wish I could take a bow for planning. All credit goes to serendipity. I can, however, take credit for arranging to have my wife meet us in more contemporary costume, with refreshments.

The nearby observatory used to house a camera obscura. Most of us made do with a mental photograph of the glorious view to the south. Perhaps Mike, halfway through his dissertation on (I'm likely getting this horribly wrong, sorry) how geography shapes culture, reflected on how our ups and downs had shaped us.

It wasn't all breezy downhill from here, but the end was nigh easier than everything that had led up to it: the Pevensey Levels are commendably level. Before the final stretch, part of our group left to find a train to get back to the lives they had left so long ago. Although a shortcut had been mooted "only if we're taking longer than expected," I hadn't availed our expedition of it, desiring a less traffic-strewn finale. I think everyone who joined me at The America Ground in Hastings preferred it and those who couldn't, forgave me.

We were a small merry band who landed at a fish & chips shop in the Old Town nearly 12 hours after setting off, keeping company with the net shops, marinating in whatever sweat that hadn't been evaporated by the cool breeze, soaking in the distant mariachi music. We toasted ourselves and the lovely evening, contemplating the achy aftermath of a fully satisfying folly of our own. 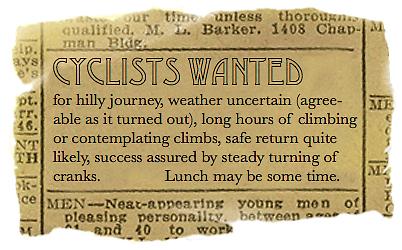 If you'd like to be on a mailing list for future rides, which will include shorter ones from Tunbridge Wells to the coast, please contact me at london2hastings [at] gmail.com. More information will be available here.