Country Roads, Take Me Home to the City

Most city cyclists I know yearn for the country, and get out here every chance they get. My affair goes in the opposite direction. Once a city boy, a decade ago my wife, my bikes and I made the big move to a sheep catchment area. While my other half has never looked back, I still long for traffic choked streets and swearing taxi drivers, heedless pedestrians and commuter challenges as both spectator and occasional participant.

The city has a buzz it's impossible to ignore; the country has buzzing bees in quiet lanes that make me snore. When I'm lucky. Actually, country roads can have more of a sting than city streets. Out where roadkill is the sleeping policeman, cyclists compete with twisty hedge-coated bends as the chief traffic calming measure. I feel that the city really is safer.

Perhaps I'm the village idiot, but once a week I get on a train with a folding bike and escape to London. As we leave bucolia, pass through the commuter belt and slide into view of the Eye and the Shard, my melancholia lifts and my spirits soar. My fingers twitch in anticipation of the filtering to come and my legs ache to churn through the critical mass. A to B doesn't interest me here, as my arrival will be my terminus. I'll be my own Circle Line.

Boris Bikes are great, but my folder is my ticket to the sights, no docking stations necessary. Mostly I flit from museum to museum, taking full advantage of the freedom of free admission. (When visiting the British Museum I used to store it in their cloakroom, until they changed their rules a few years ago.) Hanging from my arm it's both luggage and conversation piece; I've had no end of chats that started with somebody eyeing it up and telling me they might be in the market for one, how do I like it? It's heavy on the arm I tell them, but I like it fine. You just have to keep those small wheels out of big potholes. 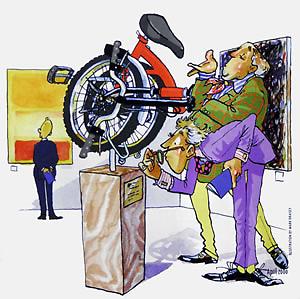 This is also my chance to go window shopping at the great bike shops, drooling over dream machines at Condor and nifty fixies at Kinoko Cycles – convenient to Chinatown, if you're in an Eastern mood in the West End – or just take a breather in one of the Evanses which dot the urban landscape.

To some extent I feel like an imposter on these daytrips, mingling with couriers and pedicabs and zipping past Look Mum No Hands (with hands firmly on handlebars down Old Street). You reached escape velocity, they seem to be saying. What are you doing back here with that hay in your hair, getting in my way like a tourist? I'm one of you, I want to answer back in this little one act mental play. I may not be carrying package or passenger, but I've got smoke in my bloodstream, too.

News of the mayor's plans for cycling superhighways doesn't move me, probably because such dedicated infrastructure isn't built for people with my taste for streetlife. I'm here for the mix, not to be separate but equal. I'm here because I love to slip down the red bus canyons of Oxford Street, thankfully no longer bendy. I'm here because as peaceful and lovely as it is back home, for a cyclist with the city in his blood there's no there there.

As my big adventure on my peewee bike draws to a close, my batteries recharged with the electricity I've just tapped into, I'll get back on that train with a contentment most of my weary fellow passengers can't know. They've just had a tough day at the office; not to put too fine a point on it, I've been goofing off. Same time next week?