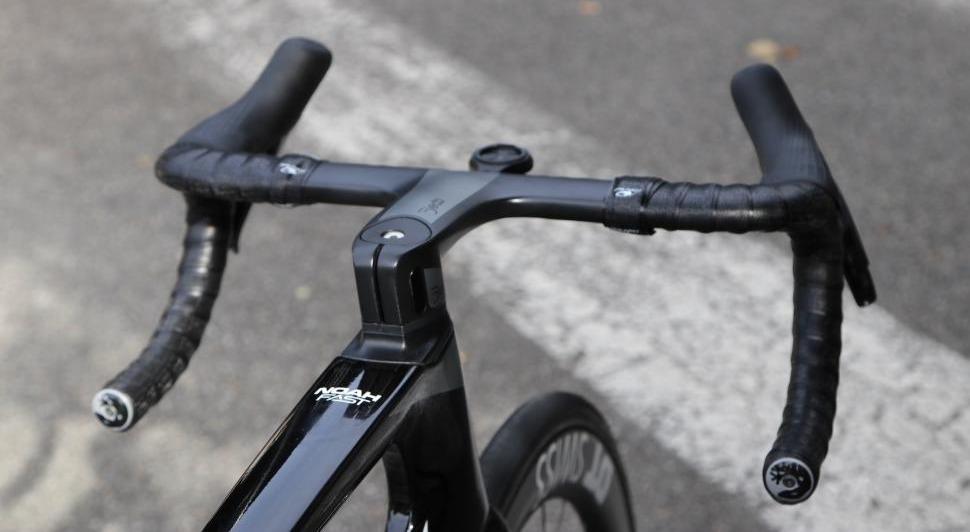 According to the world governing body’s new rules, which will come into force on 1 January, the minimum width of handlebars must be 350mm
by Ryan Mallon

Sorry, Dan Bigham and Victor Campenaerts. Narrow handlebars, the latest fad for the aero conscious and a blight on the peloton for those of us more concerned with aesthetics, are being targeted as part of a new spate of regulations brought in by the UCI for 2023.

Other aerodynamic aids, such as pin-less race number pockets and the not-so-subtle modern trend of driving a team car inches behind a rider during a time trial (often with an unnecessary number of bikes stacked on said car’s roof), have also been addressed in the world governing body’s recently published ‘Clarification Guide of the UCI Technical Regulation’.

Over the past few years, the number of pro riders using narrow bars with even narrower shifter hoods – inspired, perhaps, by the UCI’s decision last year to ban the ‘puppy paws’ position on safety grounds and pioneered by the ultra-narrow and boundary-pushing Dutchman Jan Willem Van Schip – has increased dramatically, and has even found its way into the national, regional, and local racing scene.

At the British National Criterium Championships in June, for instance, Harry Tanfield was spotted sporting some rather extreme bars on his Ribble Ultra road bike (see below).

As our tech writer Jamie Williams pointed out earlier this year, the advantage of going to a narrower bar is of course aerodynamics – not from the bar itself but from the narrower frontal area it gives the rider.

Wind tunnel data is hard to come by but some quick maths using the known Cda (coefficient of aerodynamic drag) of a cylinder (standard round profile bar) indicates that the bars themselves contribute about 0.9 watts of additional drag for each 2cm gained when travelling at 40km/h. Rather negligible, then.

> Tech trends: Narrow bars with shifters angled inwards – should you be copying the pros to ride faster?

Of course, for pros obsessed with every aero (forgive me) marginal gain, it makes a much a larger difference. Most sources indicate that for every 2cm closer together you bring your hands there’s a 25W advantage when travelling at 40km/h, which is hardly marginal to be fair.

The fact that narrower bars can squeeze through tighter gaps, which in the hustle and bustle of road racing is very useful, means a number of Tour de France sprinters have opted for narrow, 38cm bars. 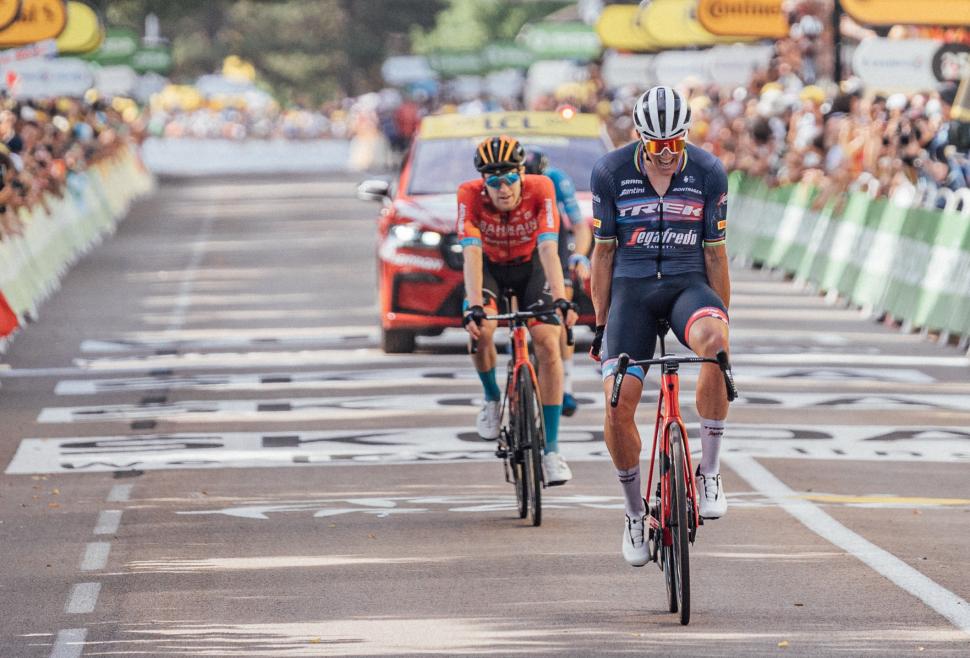 However, the UCI’s new regulations – set to come into effect on 1 January – appear to have nipped any inclination for riders to go considerably narrower than that in the bud.

While Article 1.3.012 of the UCI’s technical regulations only previously stipulated that the maximum width of a bike, and therefore its handlebars, must not exceed 500mm, the new rule also states that “the minimum overall width (outside – outside) of traditional handlebars (road events) and base bars (road and track events) is limited to 350mm.”

While the rule change should not affect any existing set-ups, it appears to have been brought in to stop any further advancements in narrow bar technology. The UCI being proactive, who would have thought it, eh?

An amendment to Article 1.3.022 now states that “in no case shall the front of the handlebars exceed the vertical plane passing at horizontal distance of 100 mm from the axis of the front wheel spindle”. This means that the very front of the bars cannot be positioned more then 100mm away from the hub, in effect outlawing less extreme versions of the controversial (and swiftly banned) Speeco Aero Breakaway Bar, briefly used by Van Schip in 2021.

Speaking of time trial positioning, the now all-important placement of team cars behind TT riders – the subject of much controversy in June at the Critérium du Dauphiné after the Ineos Grenadiers’ staff members drove suspiciously closely behind Filippo Ganna with a raft of bikes stacked on top of the car – has also been placed under the UCI’s microscope.

Although we usually associate aerodynamics with the airflow over the cyclist from the front, effectively, teams can get a push effect by stacking the car in that way and following their rider at close proximity. The UCI has moved to counteract this aero benefit by stipulating that drivers are now required to remain 15 metres behind their charges during races against the clock.

This really needs to stop, on top of fact that car is likely too close to him anyway. Given calculations i've seen likely it gave him the win over Wout#Dauphine2022 pic.twitter.com/PRuyqTgY9G

A final aero gain du jour ruled out come 1 January is the controversial (for fans and commentators at least) use of race number pockets.

Used in time trials for several years, stick-on pocket sleeves for race numbers – like the ones produced by Nopinz – have become increasingly common in the pro peloton, even during road stages.

With road race skinsuits all the rage these days, more and more riders are now electing to forgo that sacred age-old tradition (experienced by Tour de France winners and cat four warriors alike) of securing their race number to their back pockets with safety pins, in favour of some extra aero gains.

However, ahead of this year’s Tour de France, the UCI kindly requested that, for visibility reasons, teams ditch the pin-less systems in favour of the good old-fashioned method.

Putting that request into law, article 1.3.029 requires that “no item of clothing may hide the lettering on the jersey or the rider’s identification number, particularly in competition and at official ceremonies,” though they will still be allowed in individual and team time trials, where riders are easier to identify.

Perhaps it’s time to finally introduce football-style numbers on the backs of jerseys?

Well, at least there are no changes to sock heights this year…