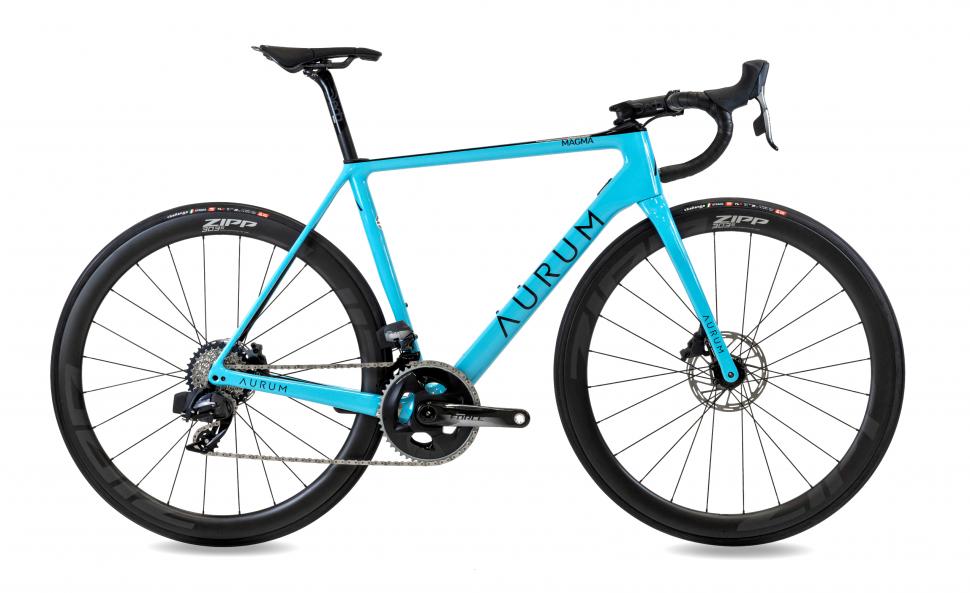 Aurum's second bike borrows features from the top-of-the-range Magma but is (a bit) easier to obtain, with full builds starting from €5,699
by Jamie Williams

The new Magma Essentia is the second race bike released by Alberto Contador and Ivan Basso's Aurum bike brand, and aims to keep the 'essence' of the top-of-the-range Magma while reducing the cost. Aurum has drawn on experience from its founders as well as feedback from the Eolo-Kometa pro team to create an all-around bike that offers "an above-market standard performance considering its price range." If you haven’t yet heard of the brand Aurum then maybe you’ve heard a little something about its founders. The two retired pros released their first bike, the Magma, in 2020, and it went down rather well. That bike has even won a stage at last year’s Giro D’Italia... but one thing that it wasn’t, was cheap, with the 'cheapest' full build costing almost £9,000.

Two years later and Aurum says that it has continued to innovate and developed new ways to optimise the use of materials in order to retain the “essence” of the Magma while making an Aurum easier to obtain. As you might expect, the Magma Essentia has quite a few familiarities with the Magma, and it inherits not only a similar appearance but also the geometry. This means that the Essentia has a relatively low front end, long reach and short wheelbase as you'd expect from a race bike.

Across the six-frame sizes, the geometry figures are closely comparable to most other like-minded race bikes out there, although the stack figure is slightly more relaxed than some, namely the Specialized Tarmac Sl7. Aurum says that the new bike is also just as aerodynamic as the Magma which is probably helped by the brake hoses being tucked up under the stem and then integrated through the frame. Sadly, Aurum hasn’t published any weights for the new bike but does say that the Essentia will be “slightly higher than the top of the range Magma.” The Magma has a frame weight of 805g for a naked size 54, so it’s likely the Essentia is still competitive compared to rivals in this area.

Aurum says it has managed to retain the main qualities of the Magma such as versatility, aerodynamics and reactivity to offer a high-performance bike with excellent technical characteristics and performance standards. It also has the same 30mm tyre clearance. 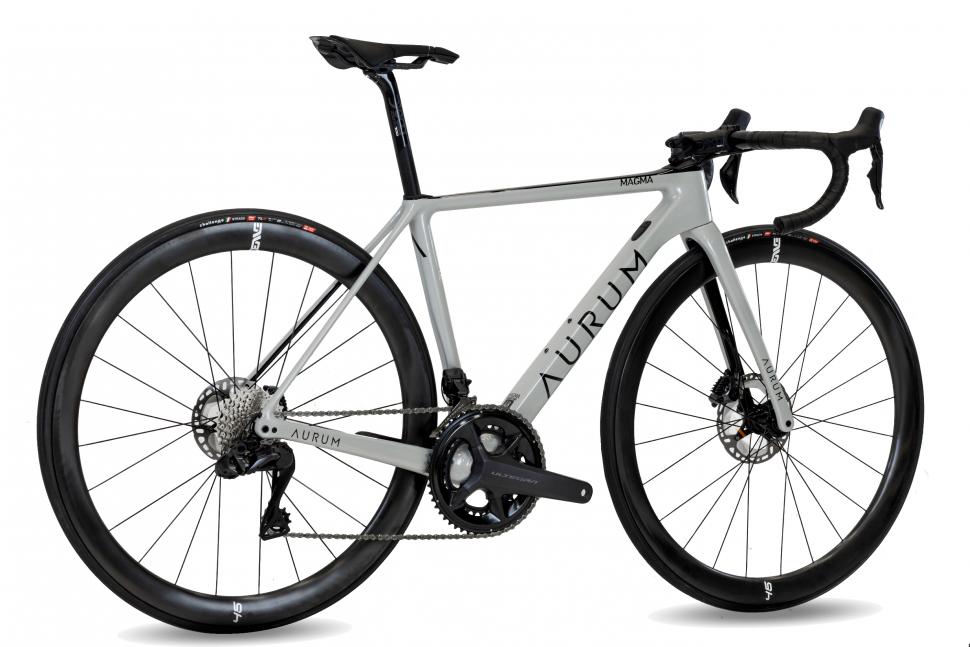 Once again, we see Aurum sticking with conventional seatstay positioning rather than dropping them as we’ve seen from most brands in the last few years. Despite this, Aurum says that comfort is a key characteristic of the frame, and the slender seatstays are designed to enable the rider to always get the best out of themselves even on long routes.

Just like on the more expensive Magma model, the frame features a BB386Evo bottom bracket, uses a 27.2mm seat post, is compatible with electronic and mechanical drivetrains, is flat-mount disc only, gets 12mm thru-axles and uses a tapered 1-1/8” to 1-3/8” headset. 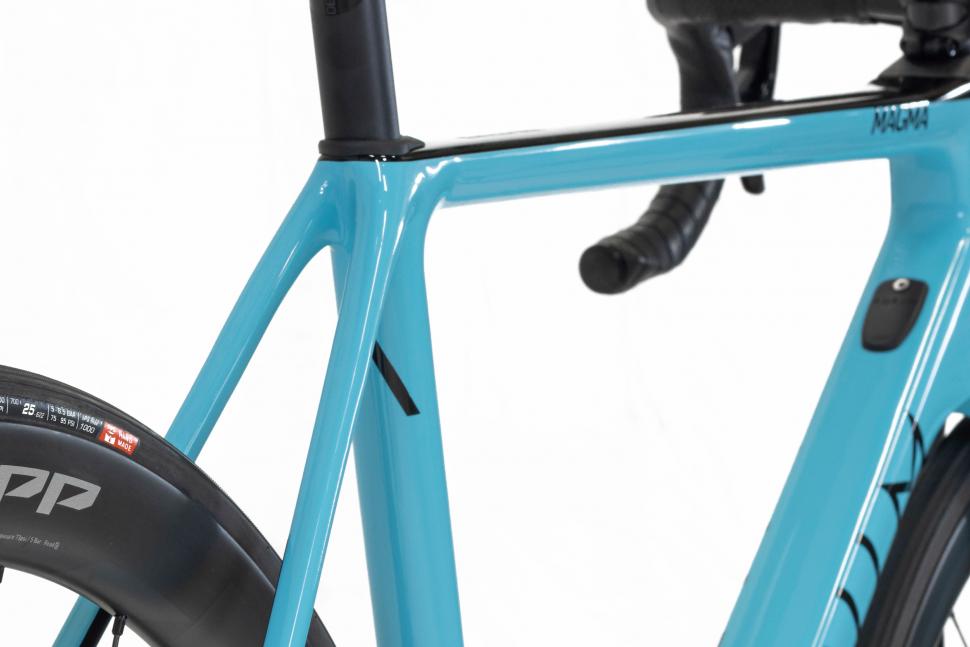 Aurum says it has paid “careful attention to keeping the essence of Magma consistent across the size range,” with the bike available in 48, 51, 54, 56, 58, and 61cm sizes. Having had a nosey at the geometry chart it is reassuring to see that BB drop and trail are nearly identical across all frame sizes which bodes well.

The Magma Essentia is available in four configurations, two with Shimano’s 12-speed Ultegra Di2 groupset and two with Sram’s equivalent Force AXS groupset. You then get a choice of either Zipp 303S or Enve Foundation 45 wheels.

> A dive into the ENVE foundation range All the builds feature components from Deda, with the handlebar, seatpost and stem being from the Deda Zero 100 range. Challenge Strada Pro TLR tyres and a Prologo Scratch M5 saddle complete the builds.

The Magma Essentia starts from €5,699 for the Force AXS build with Zipp 303s wheels which at today’s exchange rate works out at about £4,950. That makes it cheaper than the Specialized SL7 or Aethos with an equivalent groupset and a similar price to the Sram Rival AXS builds. If you want the bike built up with ENVE Foundation 45 wheels, then there’s a €700 (~£607) premium and the Ultegra builds start from €6,299 (~£5,462). 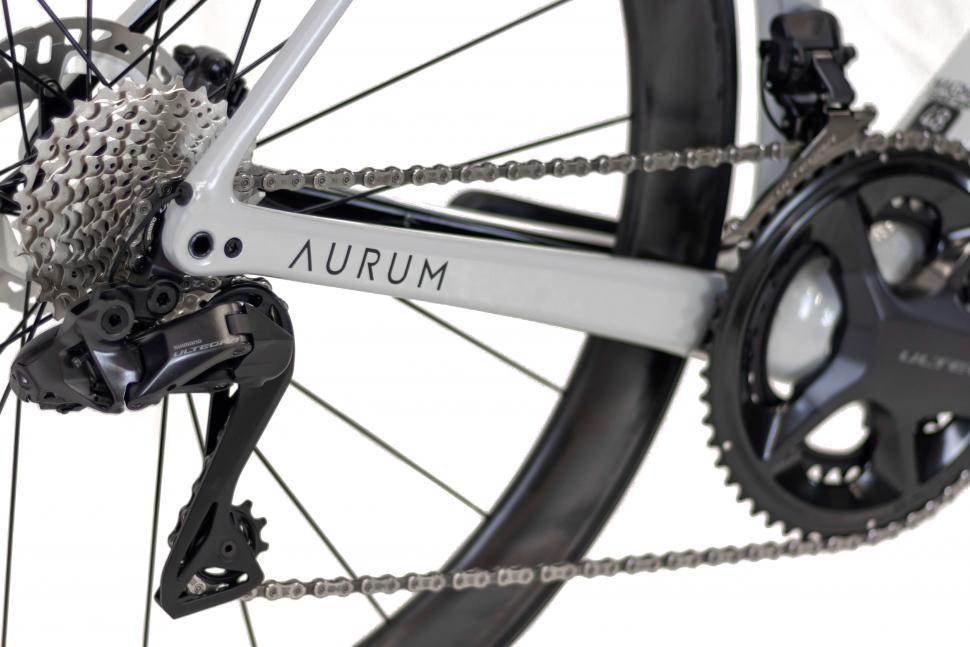 That makes it significantly cheaper than the Magma which Aurum says will make the Essentia appeal to a larger audience. The Magma will still be available as the top-of-the-range option and is the go-to race bike for the Eolo-Kometa pro team.

Meanwhile, Aurum says that the Magma Essentia has similar performance to the Magma and is designed for “advanced training” and competition however it's worth noting that, unlike the Magma, the Essentia is not available as a frameset-only option. 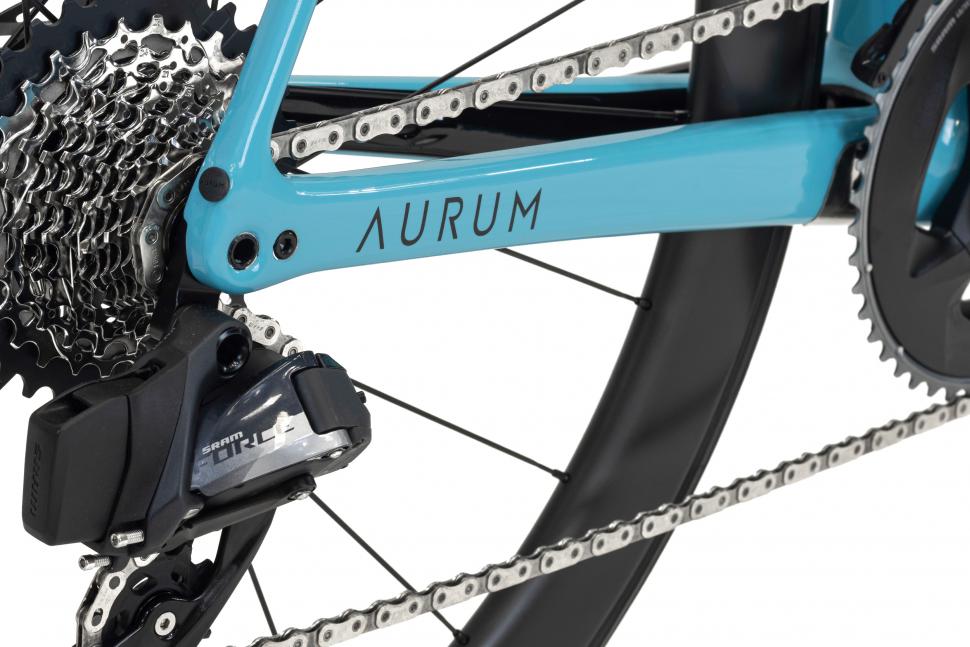 Are you tempted to go for the Magma Essentia over something from one of the more established brands? Let us know in the comments below…