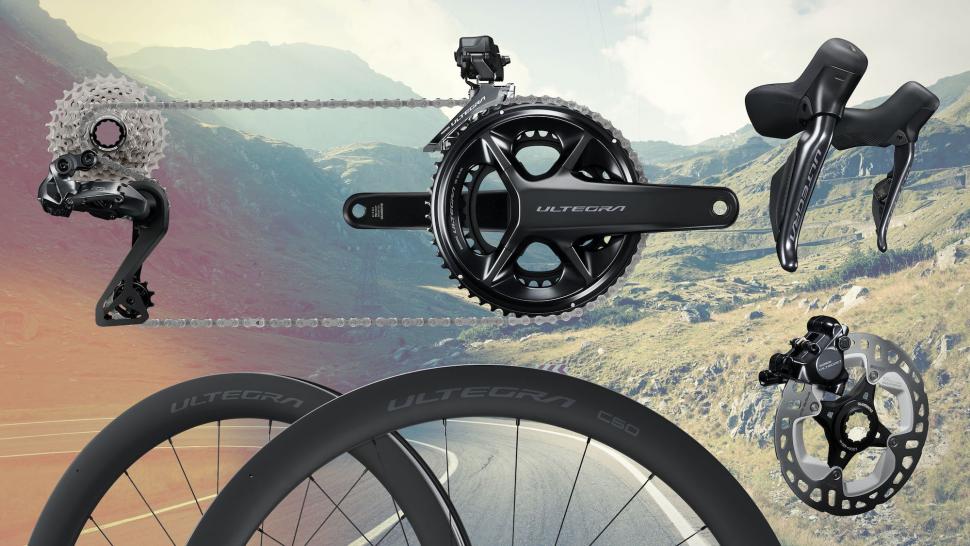 Shimano has updated its second-tier Ultegra groupset, making it 12-speed and available only with electronic shifting, and it includes a dual-sided power meter and full-carbon tubeless disc brake wheels for the first time. Like the new top-level Dura-Ace 9200, Ultegra R8100 features semi-wireless shifting, meaning that the two derailleurs are wired to an internal battery but the shifters communicate wirelessly with the rest of the system. 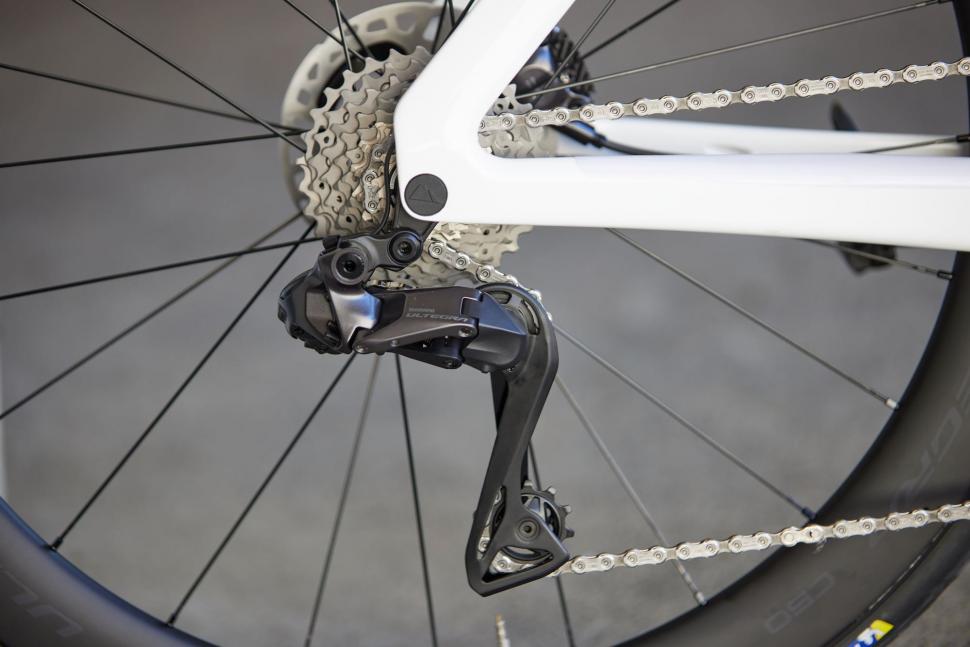 Shimano has redesigned the shifters, derailleurs, cassettes, chainsets, brake callipers, and wheels. The Di2 EW-SD300 wiring and batteries are new too. 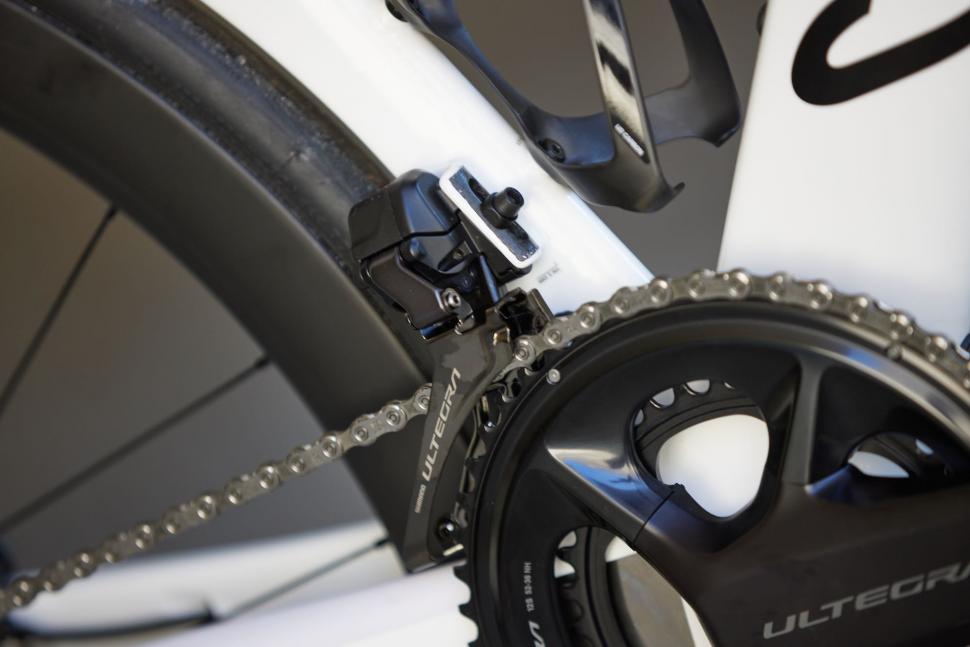 Here are the essential features of Shimano Ultegra R8100 in a handy cut-out-and-keep bullet point format:

Shimano has also revealed its new top-level Dura-Ace groupset today and says that Ultegra shares much of the same tech. It recommends that components from each groupset are used together but you could use Ultegra Di2 shifters and Dura-Ace derailleurs if you wanted; they’ll work together.

Shimano’s new Di2 shifting is semi-wireless; the front and rear derailleurs are connected by wires to an internal battery but the shifters have their own batteries and communicate wirelessly with the rest of the system. 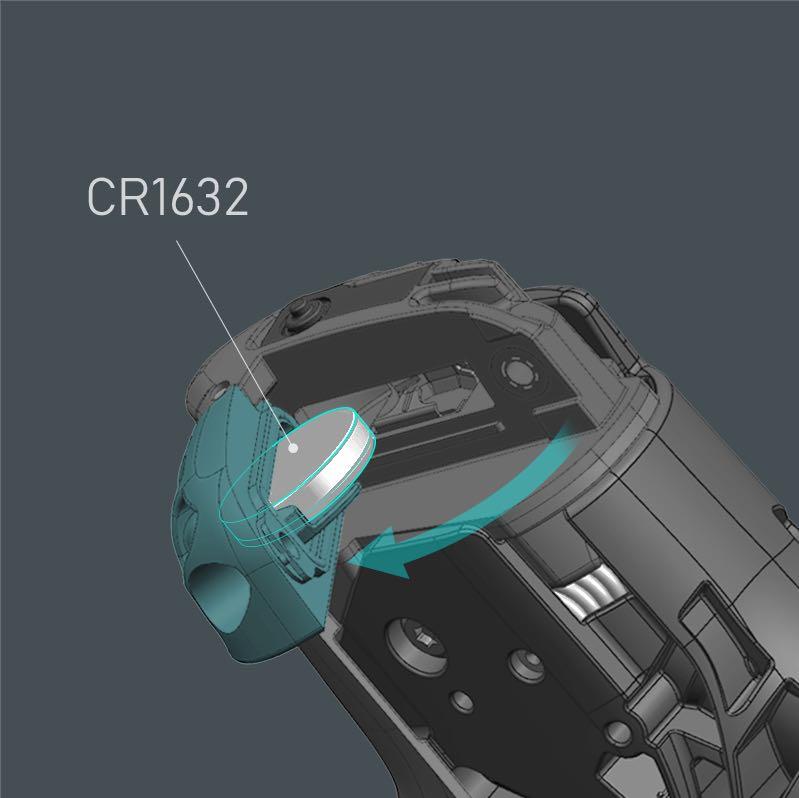 “The same new Di2 platform which improves the motor design in the derailleurs decreases the processing speed (the moving time between motor and gear mechanisms) and the transmission performance to enable Shimano’s fastest-ever shifting.”

Want some figures on that? Shimano says that the new rear derailleur is 58% quicker than the previous generation Dura-Ace while the front derailleur is 45% faster.

“One internal battery makes for a simple charging solution and ensures a stable and high voltage connection to the derailleurs,” says Shimano.

That battery is said to last 1,000km (625 miles) between charges, although the exact distance will obviously vary depending on use (if you want the details, Shimano’s calculation is based on riding 45km (28 miles) and two hours per day, with 54 front derailleur shifts and 370 rear derailleur shifts per ride; the temperature is 25°C – hopeful for the UK – and this figure assumes no Bluetooth or ANT+ communications).

The shifter buttons are powered by coin-style CR1632 batteries. Shimano reckons they’ll last 1.5 to two years with typical use. 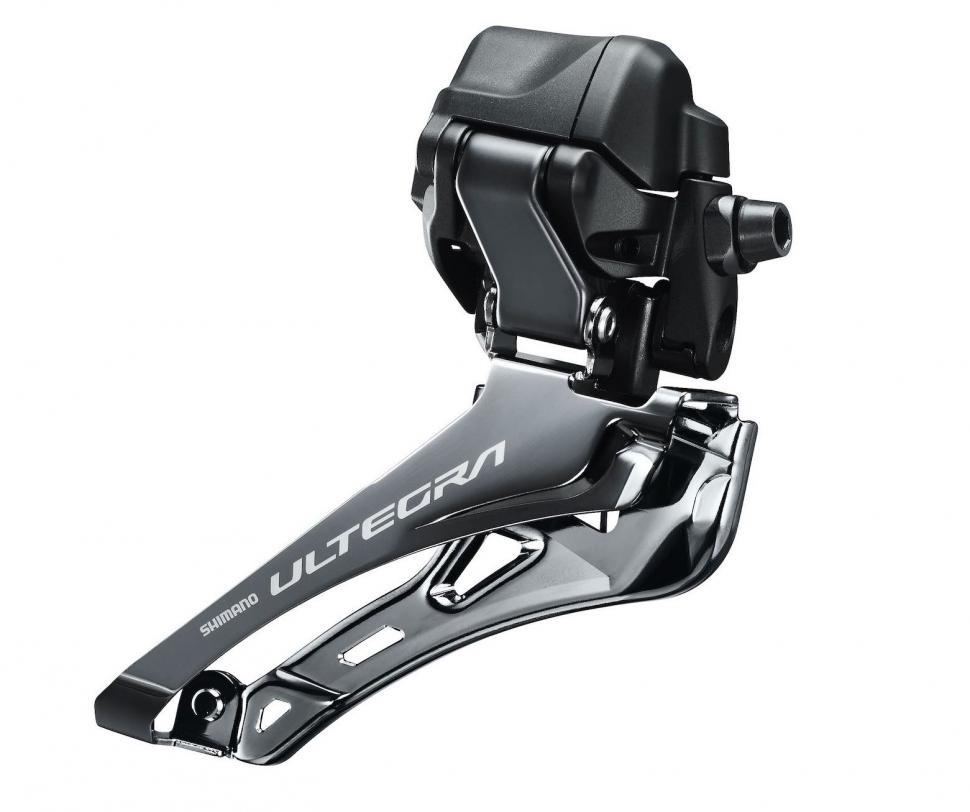 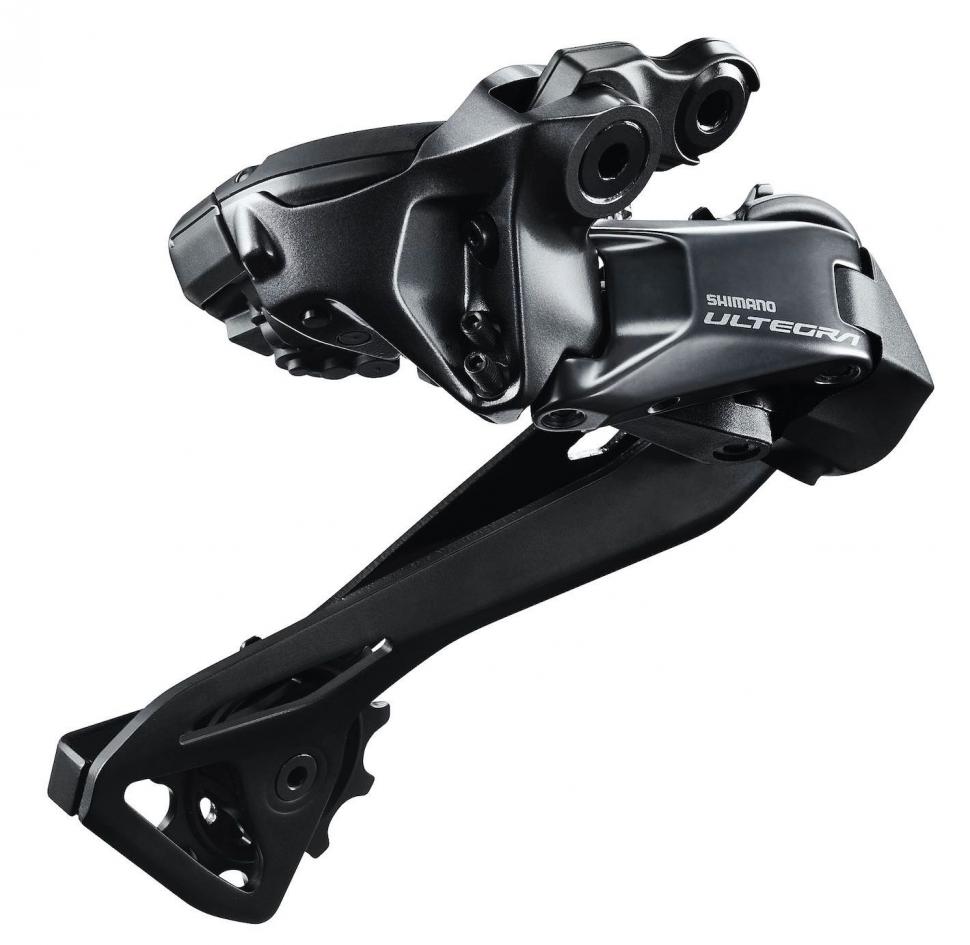 The rear derailleur provides the new battery charging point as well as the wireless connection to Shimano’s STI shifters and other third-party devices (replacing the EW-WU111 wireless unit on previous-generation Di2). 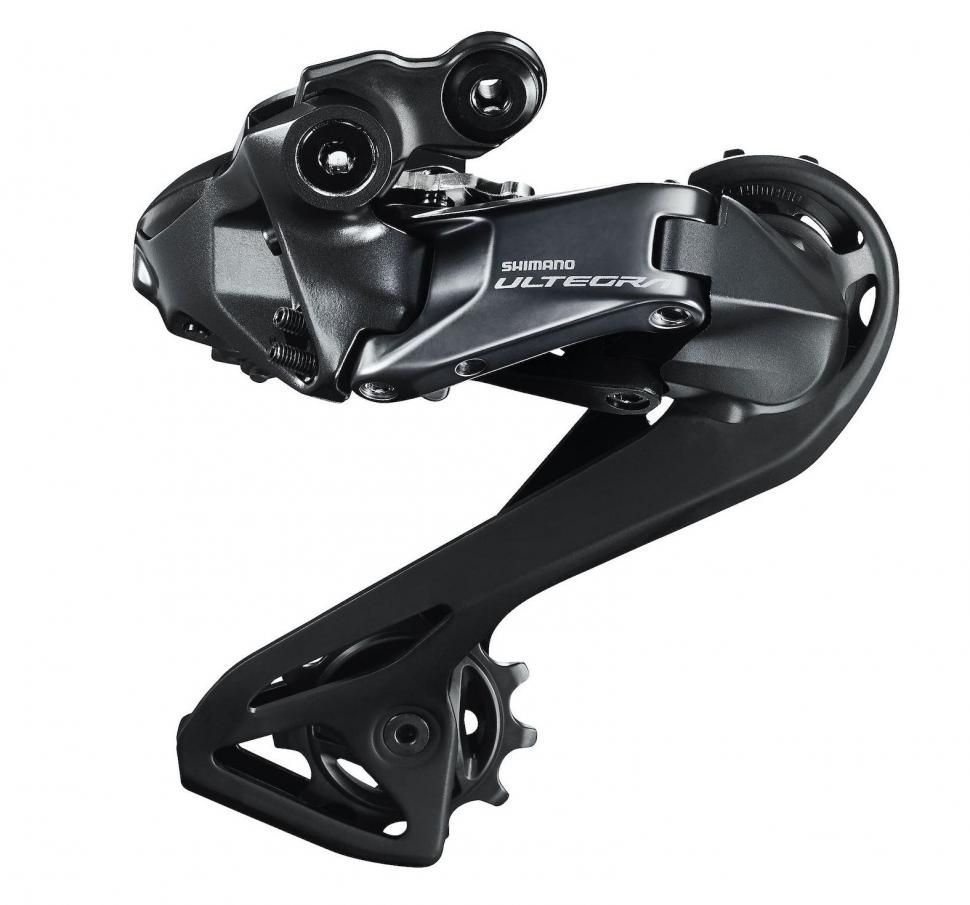 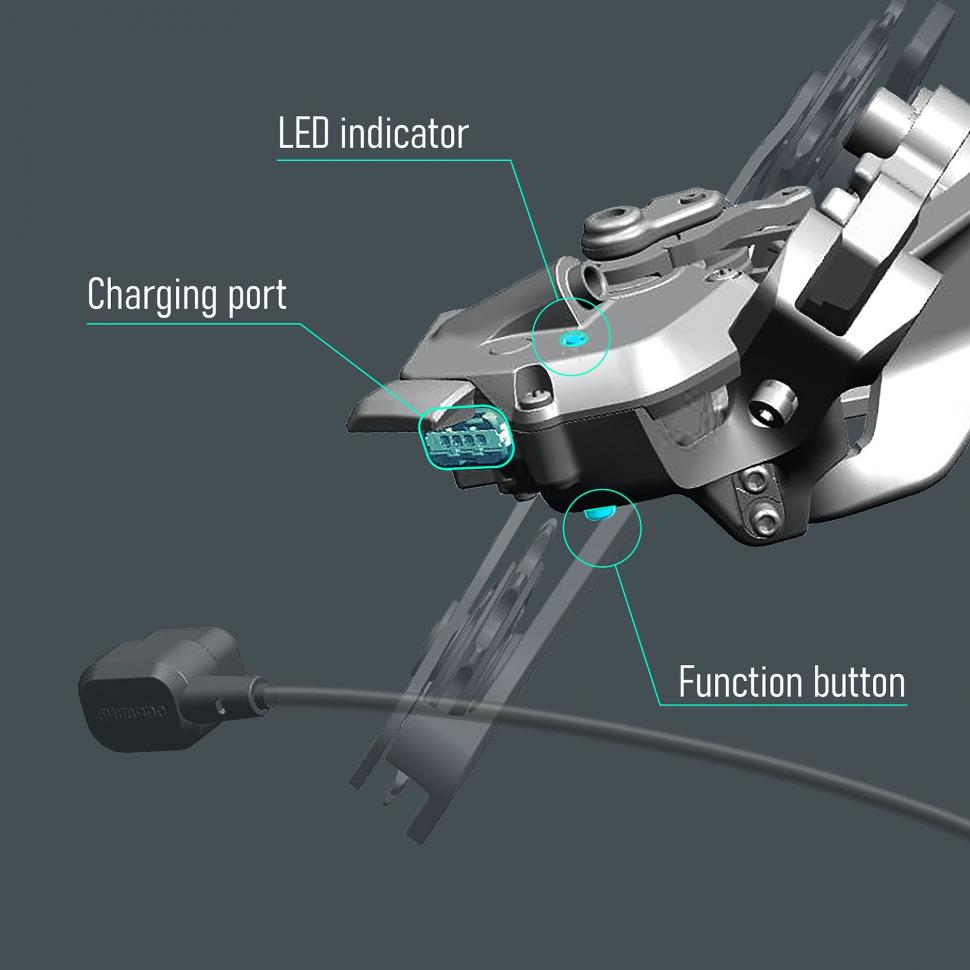 The Ultegra derailleurs function in the same way as their Dura-Ace counterparts, it’s just that a different construction means they’re a little heavier The Dura-Ace R9200 front and rear derailleurs are a claimed 96g and 215g, while the Ultegra R8100 weights are 116g and 262g. That’s a combined difference of 67g. 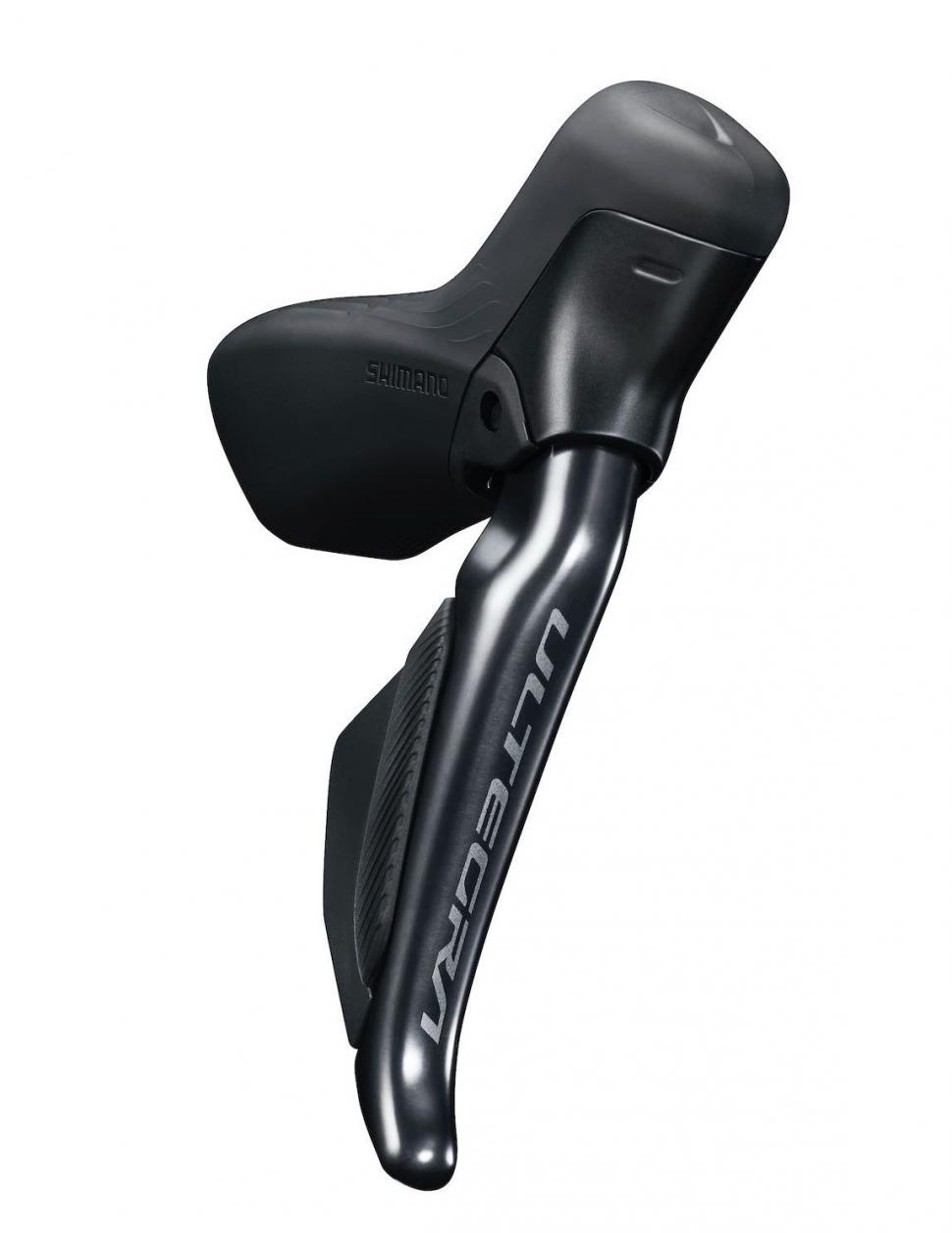 “This provides riders with better index finger and thumb grip on the hoods and better three-finger grip behind the brake lever, whilst still giving easy access to the shift lever in the drops. Offset between Di2 buttons on the lever has also been improved, allowing for better differentiation between the up-shift and down-shift button, especially with gloves or wet fingers.” 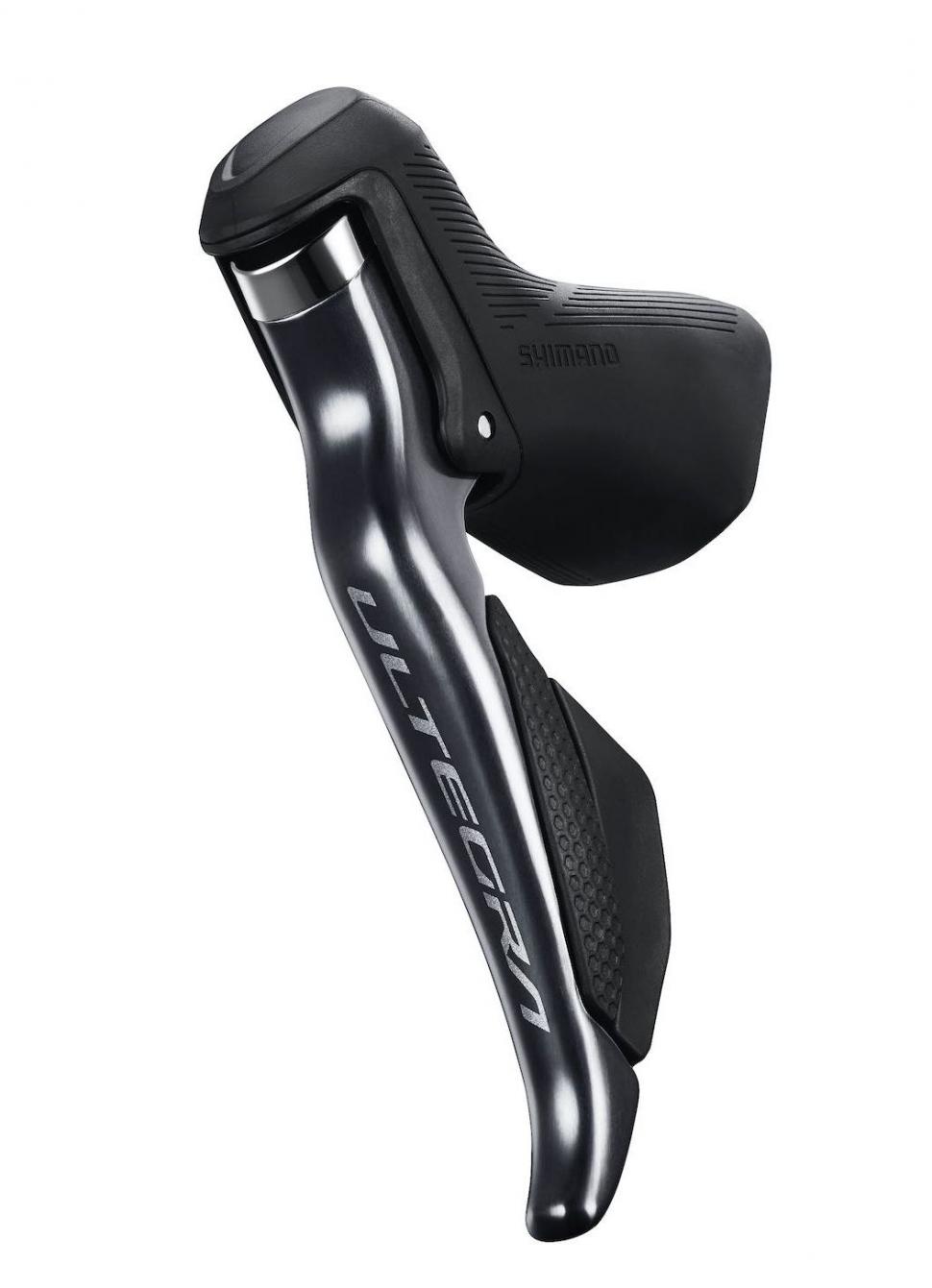 That’s an interesting development because with SRAM eTap and Campagnolo EPS systems it’s impossible to press one shift button when you’re aiming at another, but it could happen with previous generation Shimano Di2.

The fact that Ultegra ST-R8170 shifters are powered by CR1632 batteries and operate wirelessly simplifies installation and means that there’s no need for shift cable ports in the frame or handlebar. With SRAM’s eTap already wireless, it’ll be interesting to see if Campagnolo now feels more pressure to ditch the wires on its EPS components. 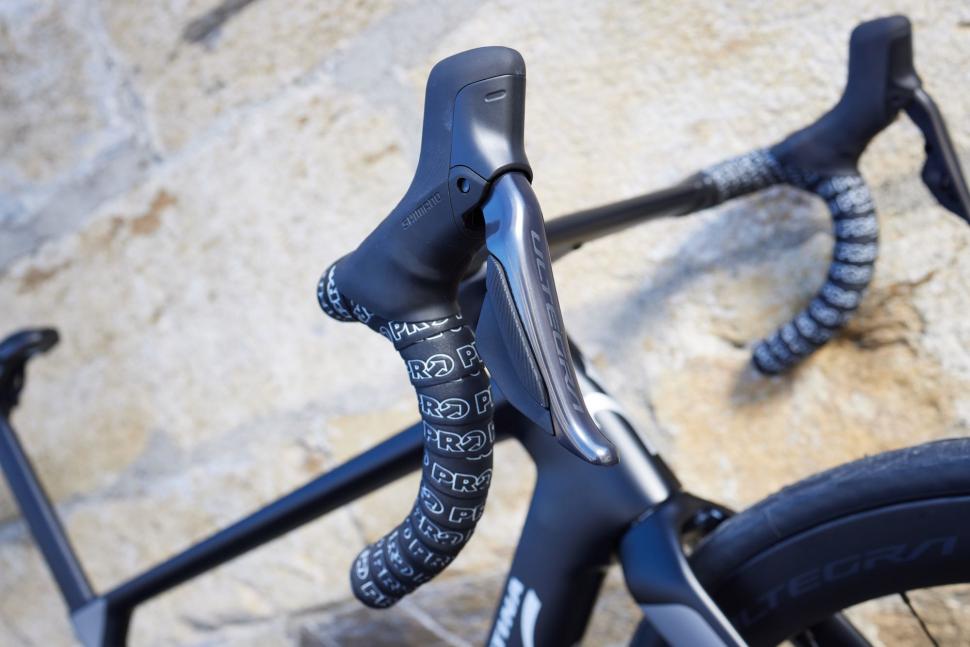 “ST-R8170 shifters are compatible with new minimised remote shifter buttons,” says Shimano. “Sprint (SW-R801-S) or climbing shifters (SW-R801-T) can be used with a clamp band or can sit integrally in the handlebars with a specific port, such as the new PRO Vibe Evo bar. These new more compact satellite shifter options either attach to the drops via a 100mm cable (SW-RS801-S) or to the tops via a 260 mm Di2 cable (SW-RS801-T).” 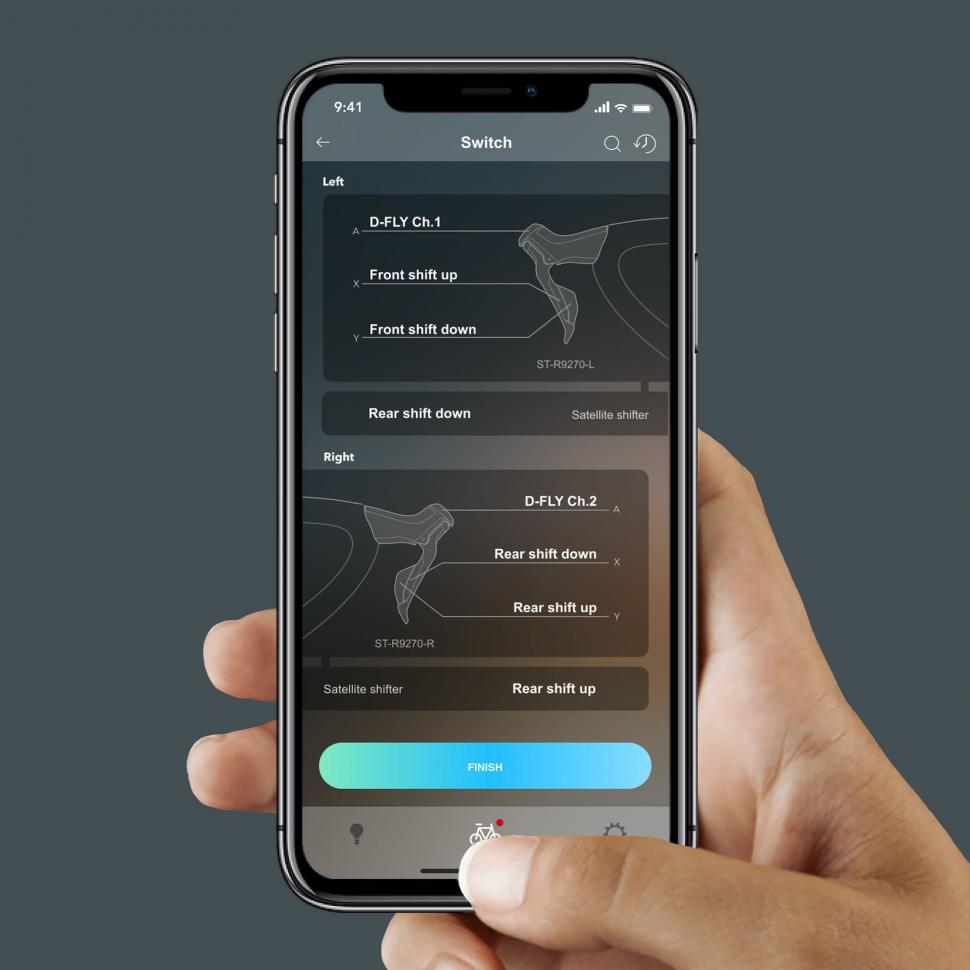 Naturally, Shimano’s updated E-Tube app is compatible with Ultegra R8100-series components and provides customisation options. You can change to Synchronized Shift (a function that automatically selects the most efficient gear on the front derailleur in synchronisation with rear derailleur gear shifting) or Semi-Synchro shifting (which automatically moves one, two or three gears at the rear to accompany a front shift), and alter the Multi-Shift settings (which control the number of gears you shift at a time), shifting speed and STI shift button mapping. Third-party cycle computers can be set up to display Di2 information. 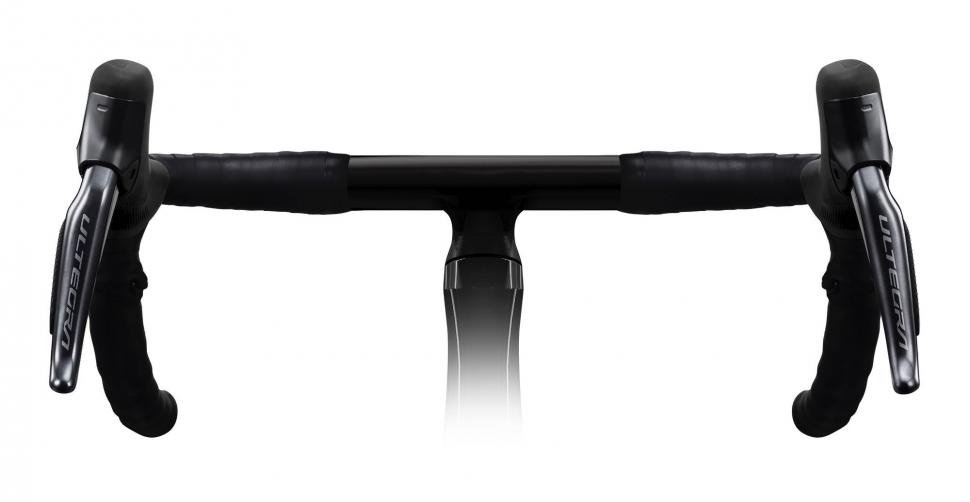 Shimano says, “The 11-30 cassette in particular has been optimised with a revision in the ‘sweet spot’ gears between the sixth, seventh and sprockets to keep the Shimano hallmark of smooth and consistent gear steps.

It’s the 16 tooth sprocket that’s new; all the other sizes remain the same.

This is quite different from before with a series of single-tooth steps across the smaller sprockets.

Shimano says that “clever ramped profiles” on the cassette result in smoother gear changes in both directions, even under heavy load.

“The result is that there is no longer any need to back off an acceleration or time an easy pedal stroke with your shifts,” says Shimano. “Riders can now put the hammer down and shift even faster, with smoother cadence and better speed transition.”

Ultegra chainsets come with the option of a power meter for the first time. Shimano’s proprietary strain gauges on both crank arms provide dual-sided data. Ultegra power meters use Bluetooth and ANT+ technology to transmit data, meaning that they’re compatible with pretty much every head unit out there. Shimano says that the FC-R8100-P power meter’s rechargeable Li-ion battery offers 300+ hours of ride time. 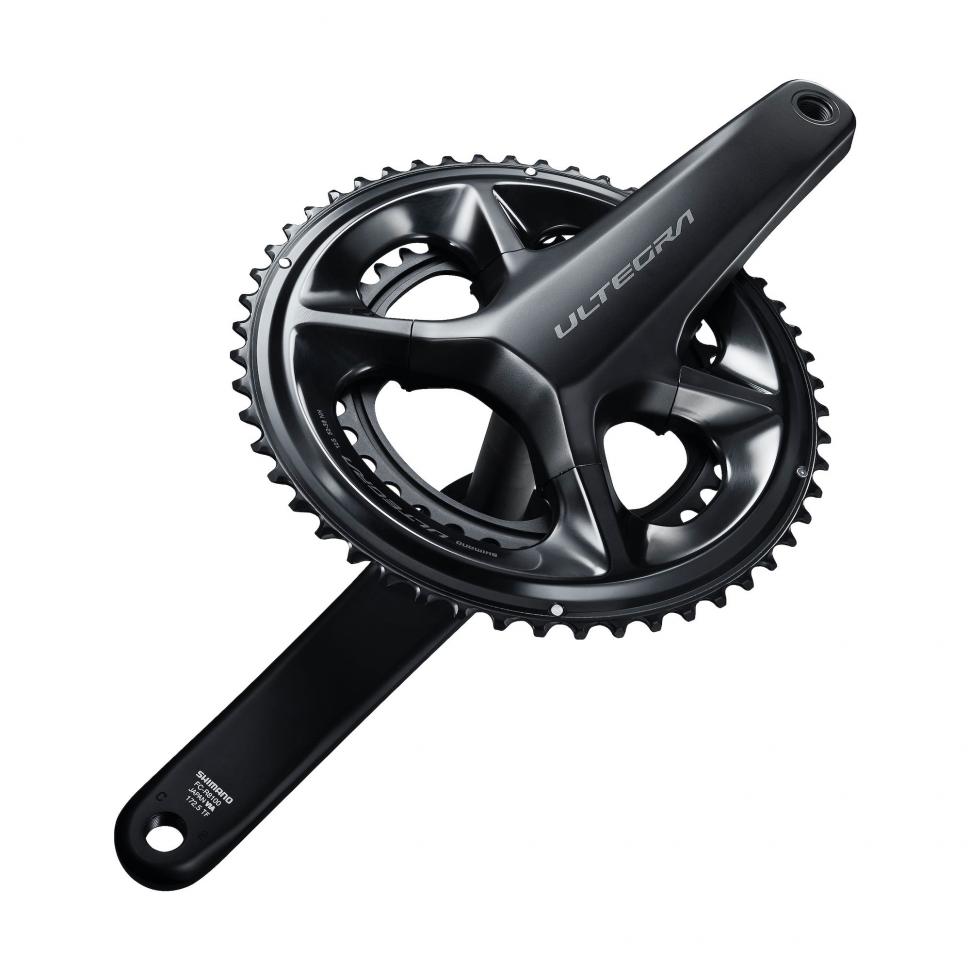 Both power meter and non-power meter chainsets come in 50-34T and 52-36T gear combinations. Shimano has ditched the traditional 53-39T option on the basis that many pros and competitive racers now prefer to use gears larger than the conventional 53T, so it offers a 54-40T chainset at Dura-Ace level. 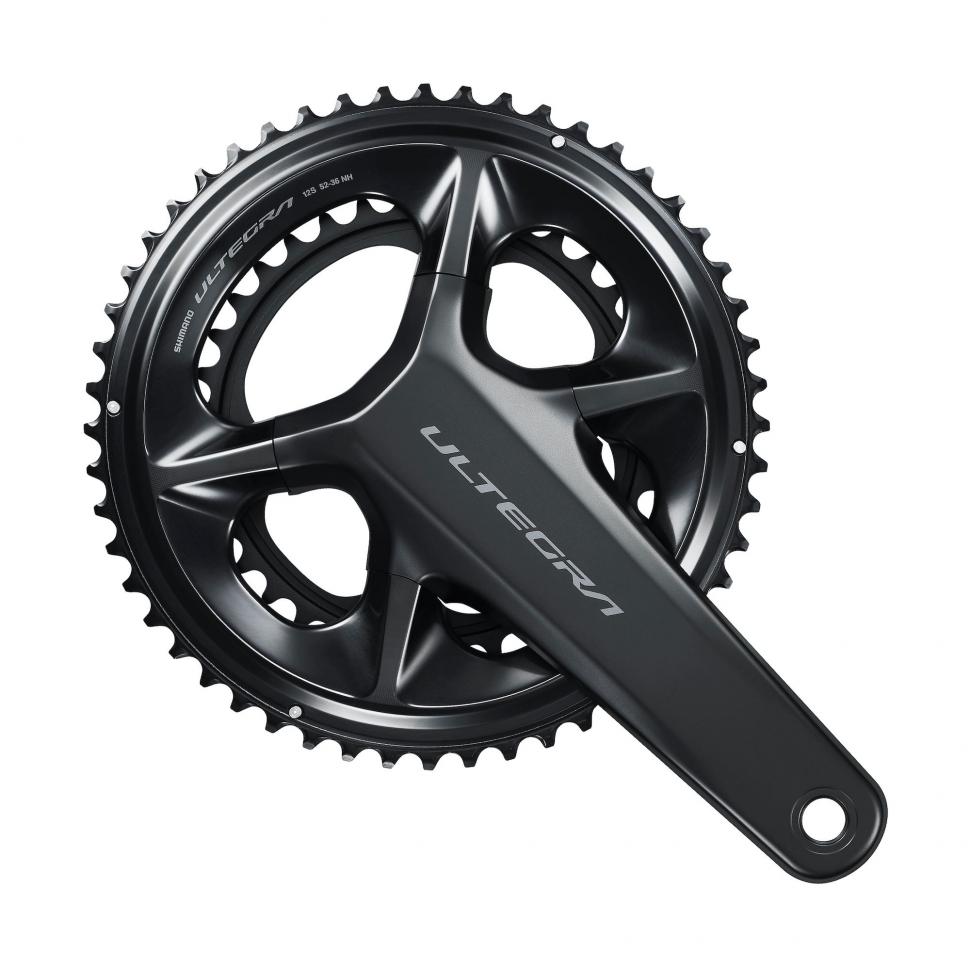 Shimano has also kicked the 46-36T Ultegra chainset into the long grass with its GRX groupsets now catering for both cyclocross and gravel riders. If you want 46-36T gearing for cyclocross, you’ll have to stick with an R8000 11-speed 46-36T chainset.

Shimano says, "With the addition of Servo Wave technology to brake levers, taken from Shimano’s mountain bike and gravel braking systems, riders have a shorter free stroke and are able to get a more immediate connection between brake pads and rotors, allowing for more feathering or modulation of the brakes, resulting in more speed carry-through and more confidence in technical situations.

“When you pull a Servo Wave brake lever, initial pad travel is fast, so little lever movement is needed to bring the pads into contact with the rotor. The power multiplication factor then increases rapidly at the pad-to-rim contact so more of the lever stroke is used to apply greater braking power with improved control.” 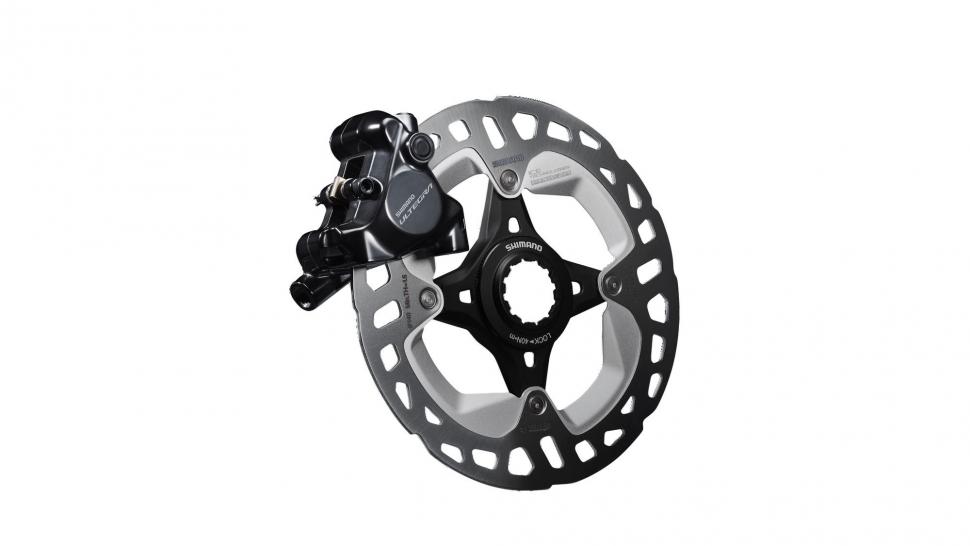 Shimano has switched Ultegra to its RT-MT800 rotors (initially designed for mountain biking) and says that clearance between the pads and rotors has been increased by 10% to reduce the chance of contact when you’re not braking. 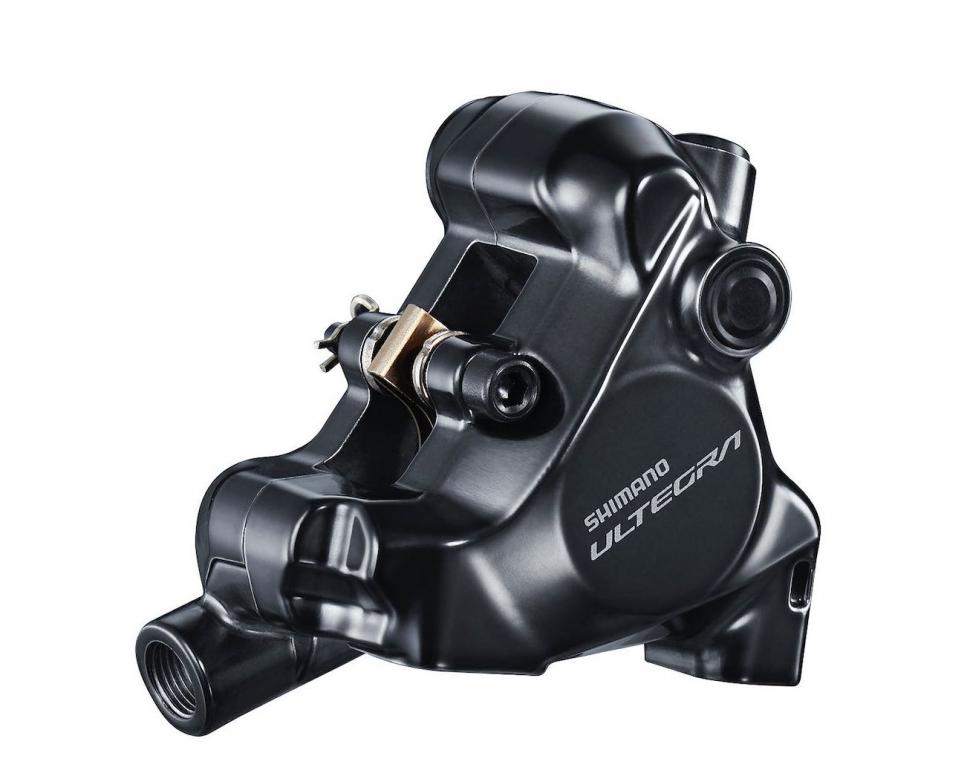 “The result is a quieter system, achieved through less heat deformation of the rotor and less temporary interference between the pad and the rotor,” says Shimano. 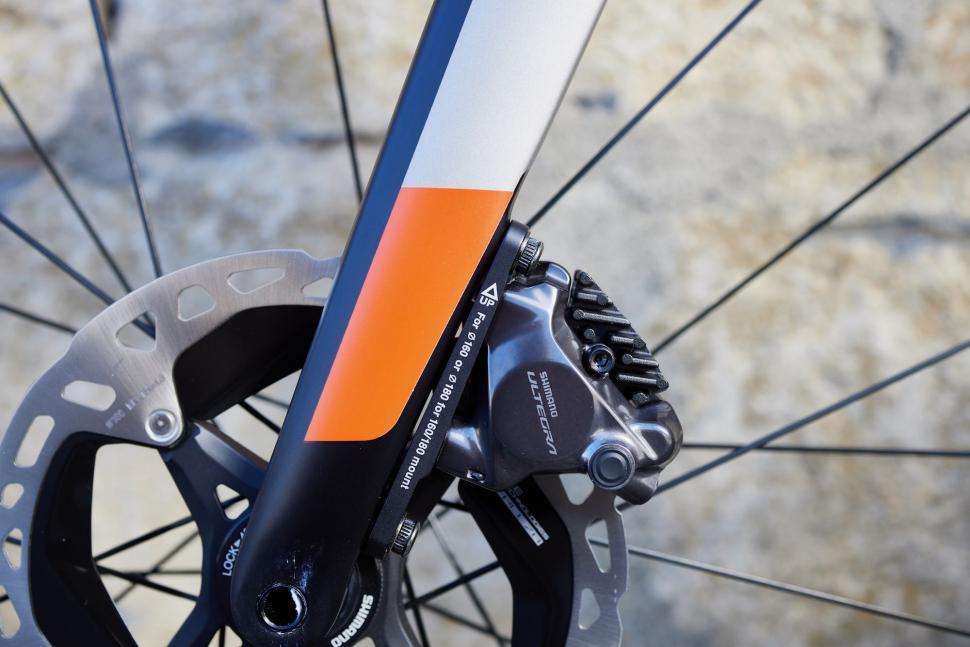 In terms of maintenance, you can now bleed the brake without removing the calliper from the frame thanks to a separate bleed port and valve screw.

Shimano claims a weight of 282g for a pair of Ultegra brake callipers compared with 229g for Dura-Ace. 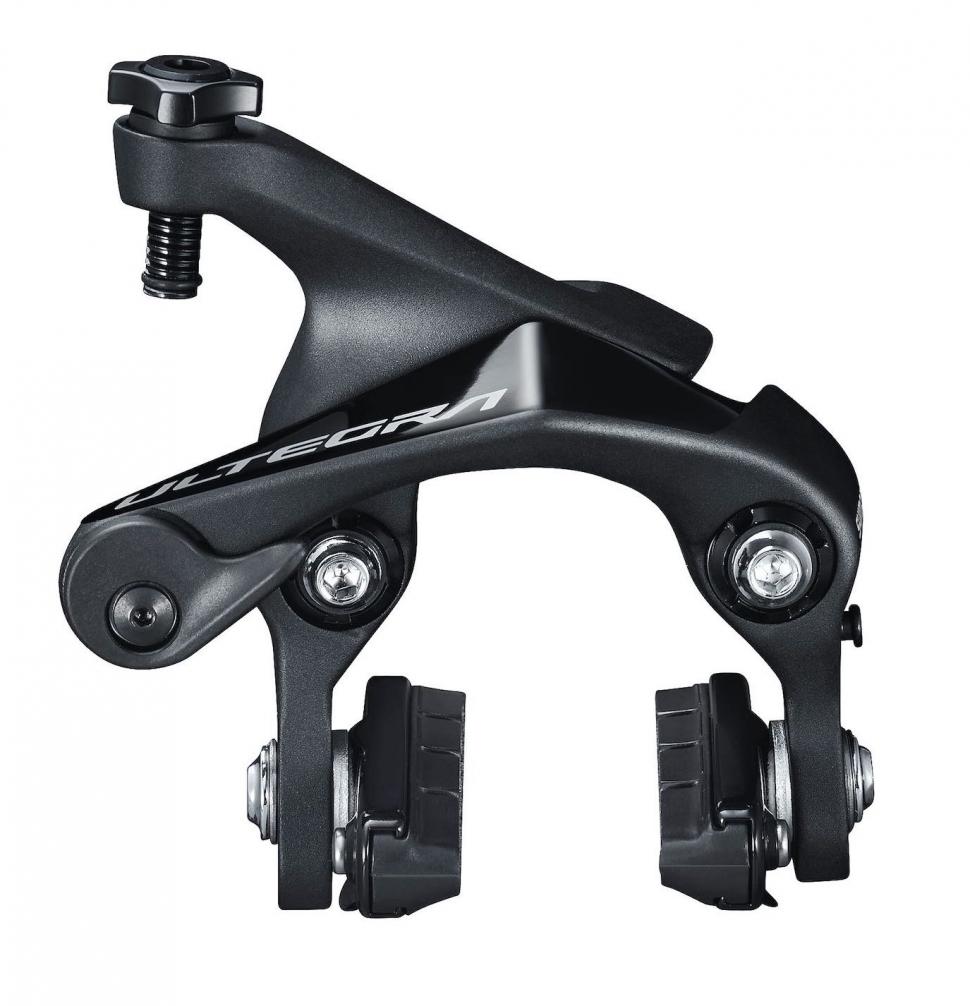 Rim brakes remain as an option in the Ultegra R8100 range, but the dual control levers for use with rim brakes don't communicate wirelessly for gear changes.

Shimano has introduced a full-carbon tubeless disc brake wheel line-up at Ultegra level for the first time, saying that it has focused on drag reduction, rigidity and weight. There are three different rim profiles, the height in millimetres included in each model name. All have 21mm internal and 28mm external widths. 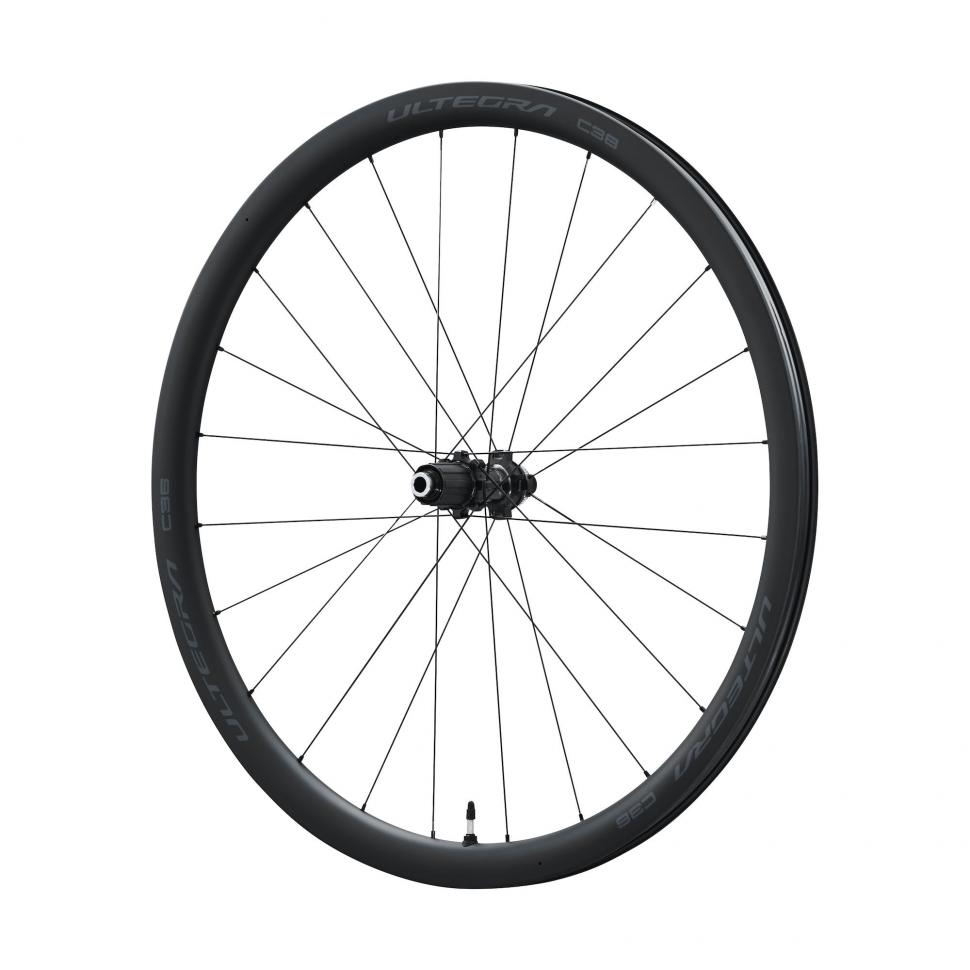 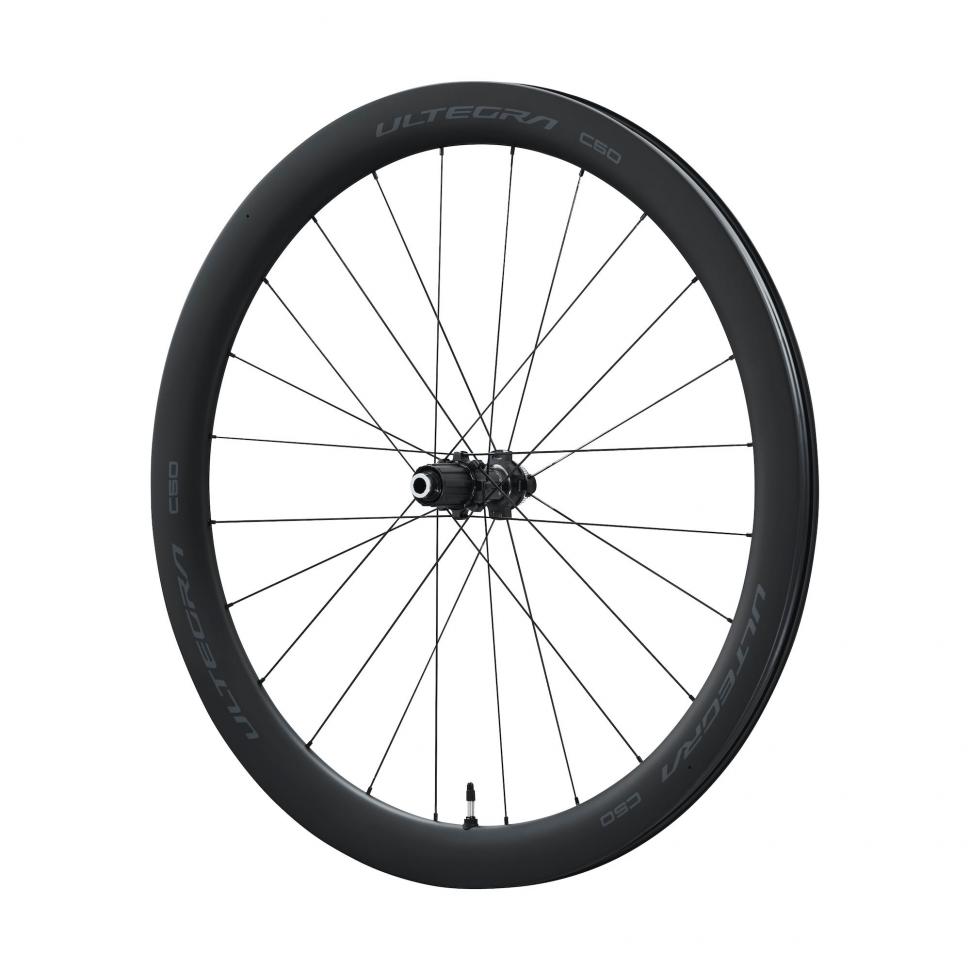 The C50 (WH-R8170-C50-TL) is designed as an all-rounder “with a great balance of drag, lateral and driving rigidity, periphery and overall weight and controllability”, according to Shimano. 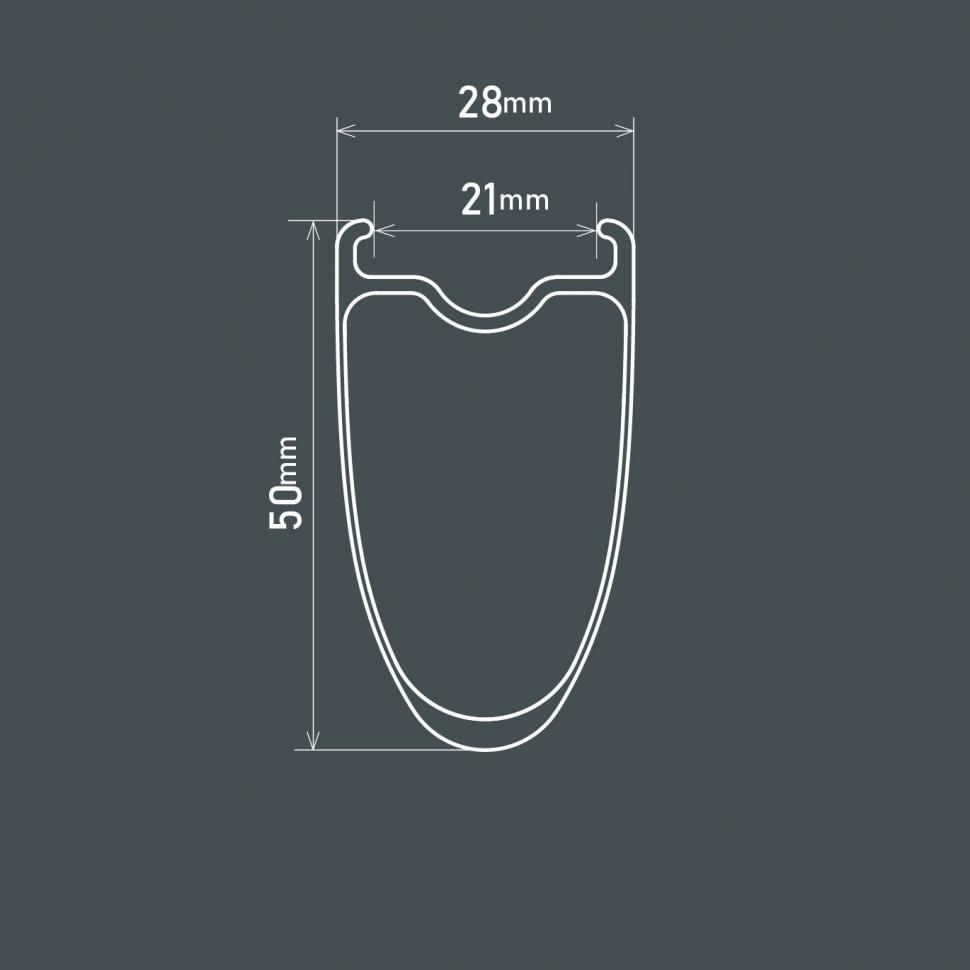 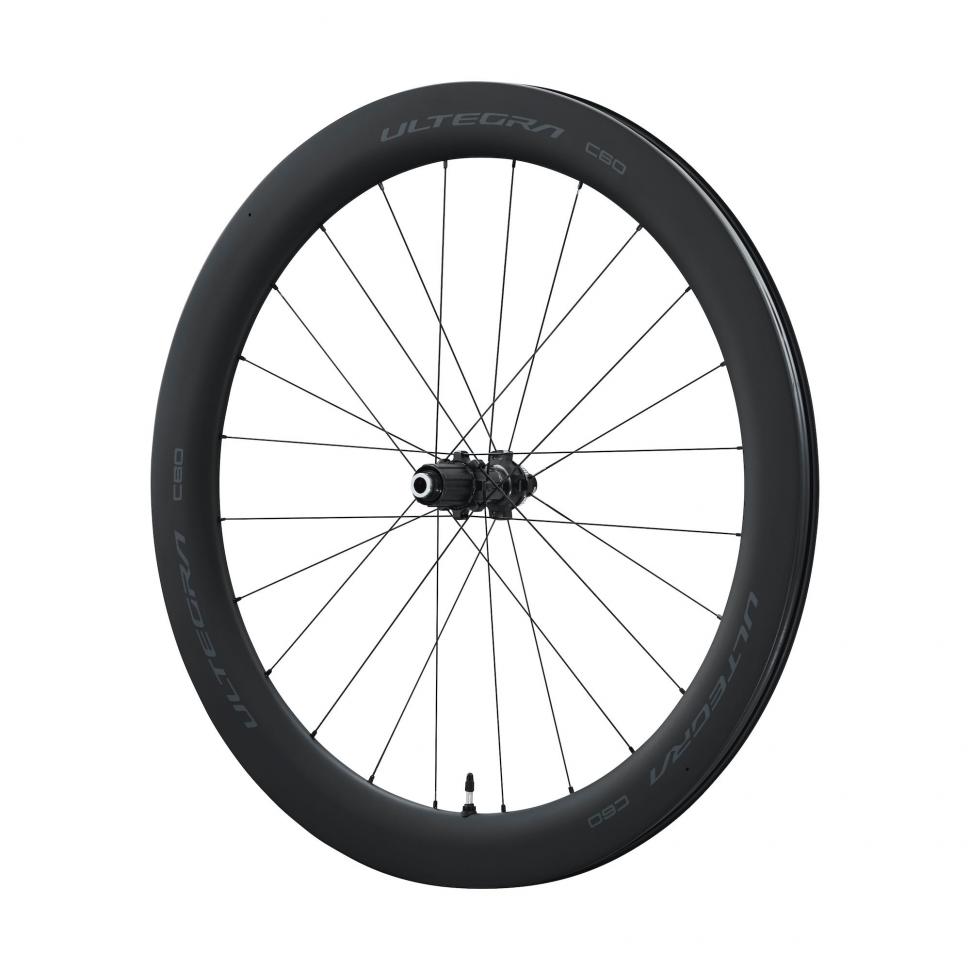 Here's a graphic overview of the Shimano Ultegra R8100 range: 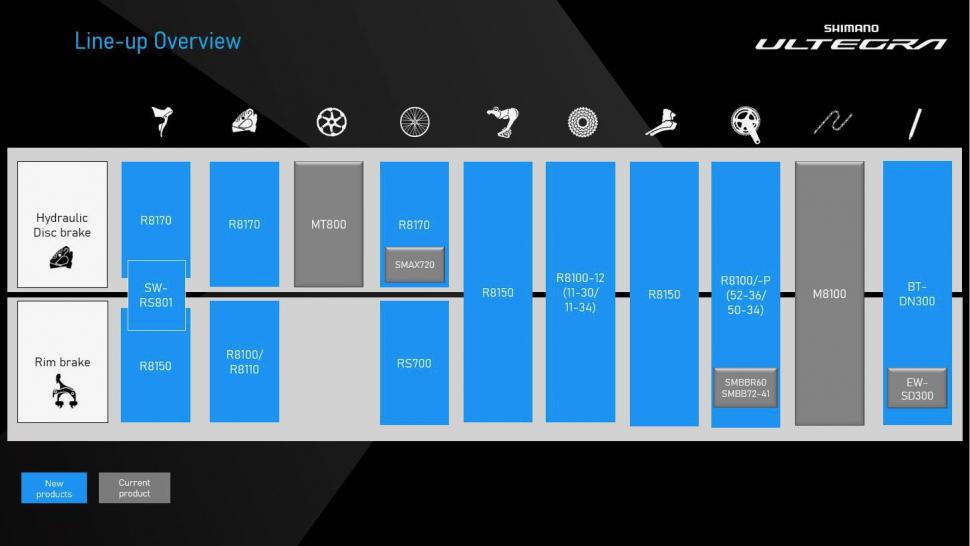 And here are the weights of Shimano R8100 components compared with those of previous-generation Ultegra R8000 (in grams):

As you can see, the overall weights are very similar.

Here are the prices for Shimano Ultegra R8100 individual components:

Shimano says that Ultegra R8100 components will be available in stores from October 2021. How realistic that is, we couldn’t tell you.