Movistar switches from Campagnolo to SRAM and Zipp for 2020 season

Spanish cycling team Movistar has ended its 37 year partnership with Campagnolo and will switch to SRAM and Zipp components for the 2020 season, in a new two-year deal confirmed today, but largely expected after pictures emerged on social media before the end of last year.

It’s a blow for Campagnolo as the iconic Italian company struggles to maintain a presence in the fiercely competitive WorldTour peloton, where the cost of supporting a team doesn’t come cheap. Good news for SRAM however, after seeing the end of the Katusha-Alpecin team at the end of last years, as this Movistar deal ensures the US company has two teams showcasing its products in the WorldTour peloton. The other team SRAM also supports is Trek-Segafredo.

Movistar will retain the support of Canyon for bikes, with the Aeroad and Ultimate being the two key models the riders will use. In past seasons we’ve seen the largely climbing focused team favour the Ultimate for its lower weight compared to the aerodynamic Aeroad.

The bikes, still resplendent in black and blue, will be dressed with the latest Red eTap AXS groupset with Quarq power meters and Zipp wheels. What’s most fascinating is the fact that until now Movistar and its mostly Spanish riders have resisted disc brakes and preferred rim brakes, but it looks likely the entire team will be using disc brakes.

Not only will the team have to get used to disc brakes, but the gear ratios with SRAM’s flagship groupset is a radical departure away from conventional groupsets. The team will be used to 12-speed of course, Campagnolo Record and Super Record were also 12-speed, but Red eTap AXS uses very different gearing. 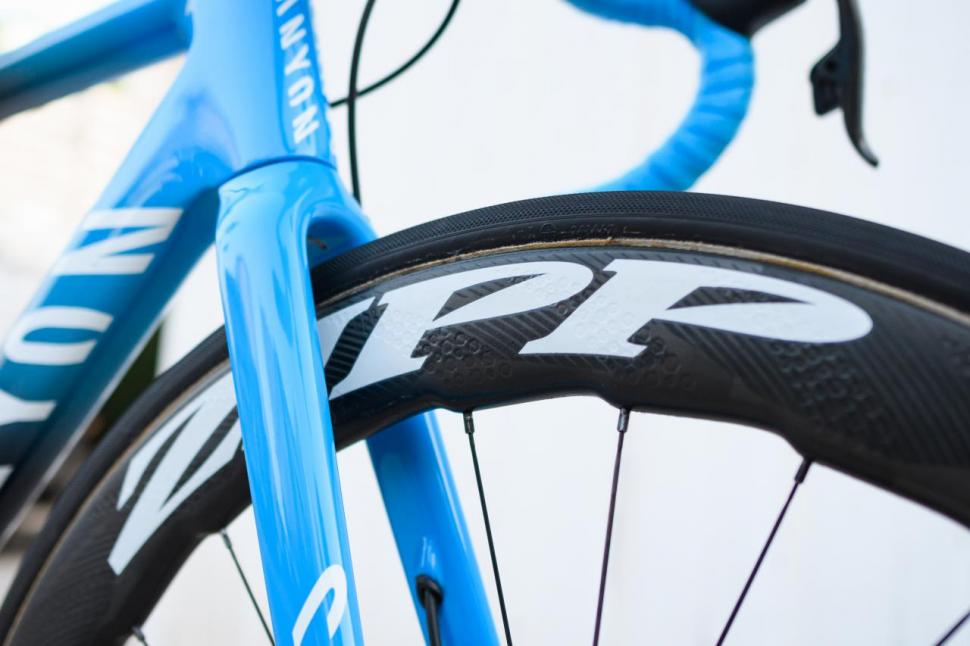 The key to AXS is smaller chainrings and a cassette starting with a 10t, not the more common 11t, smallest sprocket. The aim is to both increase the range at both ends whilst also offering smoother gear steps. The men’s team will use 50/37 chainsets with 10-33t cassettes, the women’s team will used a 48/35t chainset.

Alejandro Valverde is a rider that has seen cycling tech change a lot since he first became a professional rider in 2002, but this switch from Campagnolo to SRAM might be his biggest challenge yet.

“I have been very curious about SRAM and Zipp for many years, and I am excited to be a part of the SRAM family,” says Alejandro Valverde. “The componentry and the technology, the support, and how well they listen to the riders is unique and impressive.

His teammate Enric Mas is apparently keen on the gearing range offered by the AXS groupsets. “I look forward to racing on the new AXS gearing ranges. The idea of smaller steps between the gears should benefit a rider like me who relies on a consistent cadence when I time trial or climb,” he says.

The men will begin their season at the Tour Down Under (January 19-26), while the women’s first race will be the Vuelta CV Féminas (February 9).

It’ll be interesting to watch how they get on with their new equipment.