The Strava smartphone app will stop supporting Bluetooth and ANT+ device pairing from 28th October, as announced on an email sent out to its many users this week.

The reason Strava has dropped support of third-party devices like heart rate monitors, speed/cadence sensors and heart rate monitors is apparently due to Bluetooth pairing with some sensors directly to the app caused it to crash for millions of users.

- 6 reasons to use Strava 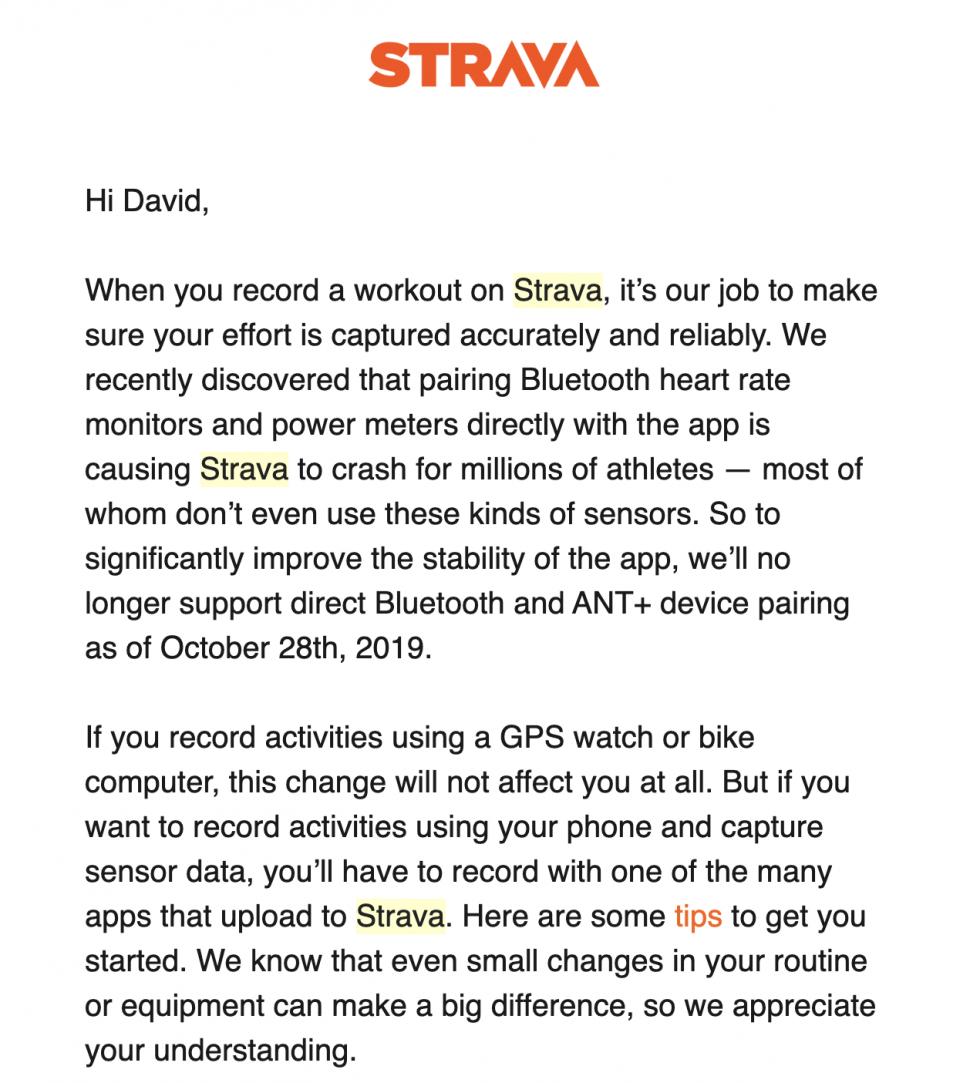 It does not effect you if you use a Garmin or Wahoo computer to record your ride and then upload to Strava. It’s all about people pairing devices to the Strava smartphone app using Bluetooth.

What does that mean if you want to sync Bluetooth sensors to your smartphone? Incredibly, rather than fix the problem, Strava recommends using another activity recording app and then uploading to Strava. That does not make it easier for users and clearly risks alienating loyal Strava customers.

Strava is still arguably the biggest online activity tracking website for cyclists, but this news has not been well received, with many complaining on social media.

Lame decision by @Strava today to drop support of Bluetooth devices. Now you have to have something like a bike computer or a running watch to track metrics #strava

Try Panobike+ from Topeak. It works with most Bluetooth devices and displays everything on the “dash”. @Strava is really taking a step backwards with this move.

@reckless and the Verge team need to do some digging and find out why in the world @Strava would make the decision to remove Bluetooth pairing from their fitness tracking app!!!! WT Actual F!! pic.twitter.com/kCOqNM4Eix

@Strava breakup with Bluetooth, break up with @relivecc, Just tell it to me straight...you want to break up with me too. Well, goodbye then. (insert dying pac-man sound here)

@Strava Why not make the bluetooth and ANT+ features configurable instead of removing them? I will be canceling my Summit membership if this is your way forward. You’re pushing your customers to other apps, why on earth?

Does this news impact you? We'd love to hear from you in the comments section below.

And don't worry if you're miffed at Strava's decision, there are plenty of other good fitness tracking apps you can choose from. Here's a load for starters.

1
Adidas launches Velosamba SPD cycling shoes for city cyclists
2
Win! £1,500+ worth of Pacenti carbon wheels, alloy wheels and cycling caps with multiple prizes to be won
3
Jail for hit-and-run drunk driver who crashed into three cyclists, causing serious injuries
4
World's first eSports pro cycling team sacks rider for cheating on Zwift
5
Devon cyclists to be given helmet cameras to help catch dangerous drivers
6
"Too ridiculous": Cyclist reports motorist for driving on the pavement... and is threatened with fine for 'cycling on the footpath'
7
Cyclist fined after submitting dangerous driving video to police
8
Bath golf club set to be transformed into bike park