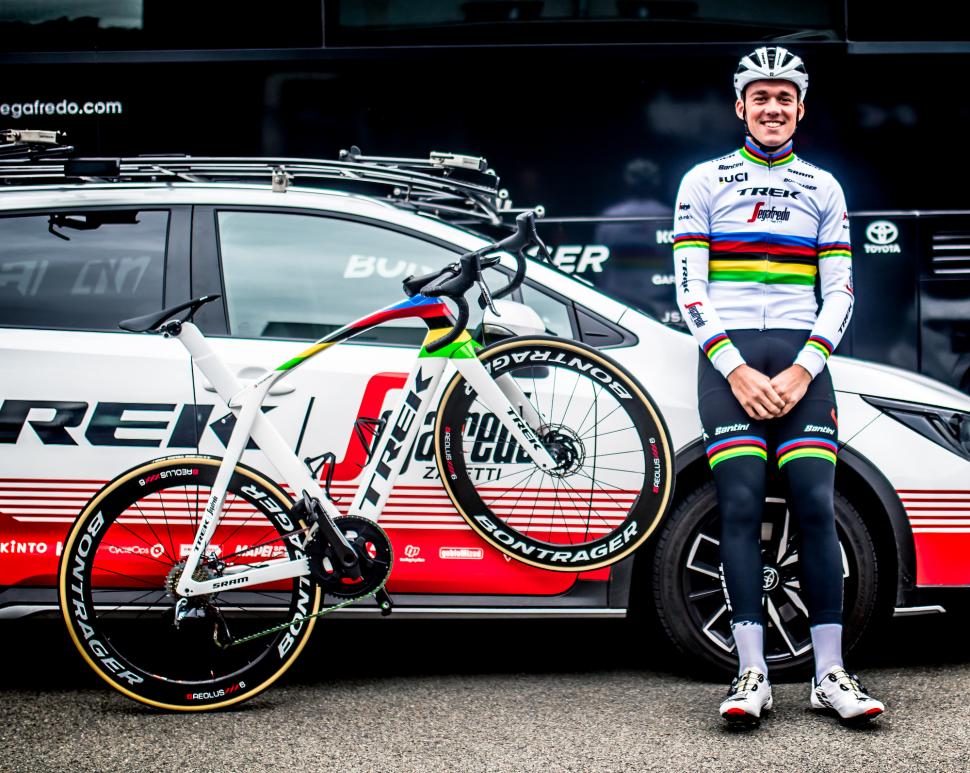 Mads Pedersen made history to become the first Danish winner of the UCI Elite Men’s Road World Championship in Harrogate when he coped with atrocious conditions aboard his Trek Madone SLR 9, and he’s now got a brand new bike with a paint job to match his new rainbow jersey. 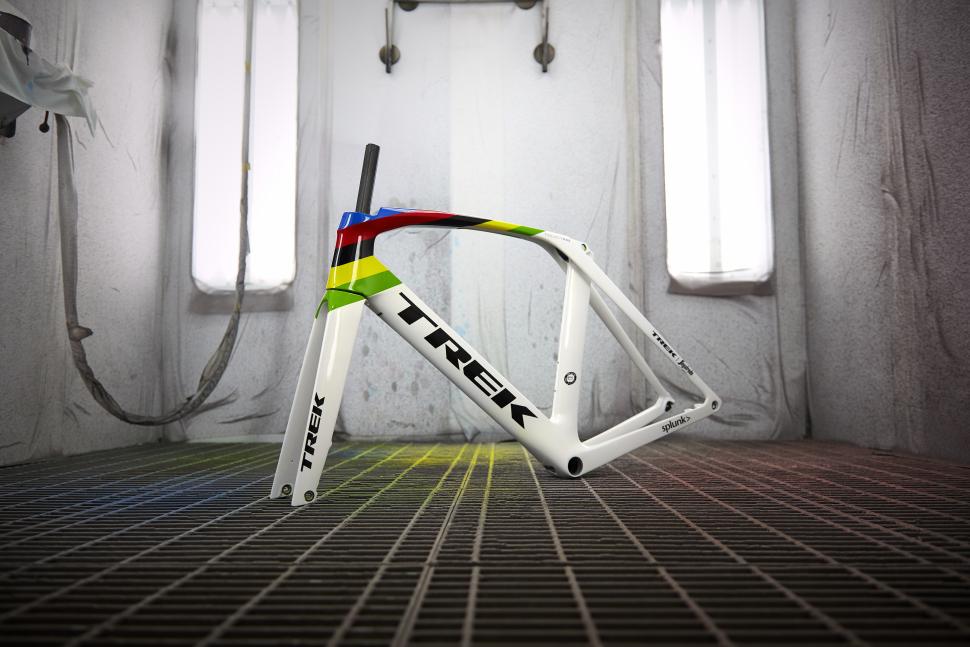 The 23-year-old Danish rider was riding a Trek Madone SLR 9 Disc, the same one he has been using all season. For the race he rode a bike with the “Molten Marble” paint finish that was first unveiled at the Tour de France, replacing the standard red finish of previous team bikes. For the rest of the season and all next year though, he’ll ride this specially painted world champs edition. 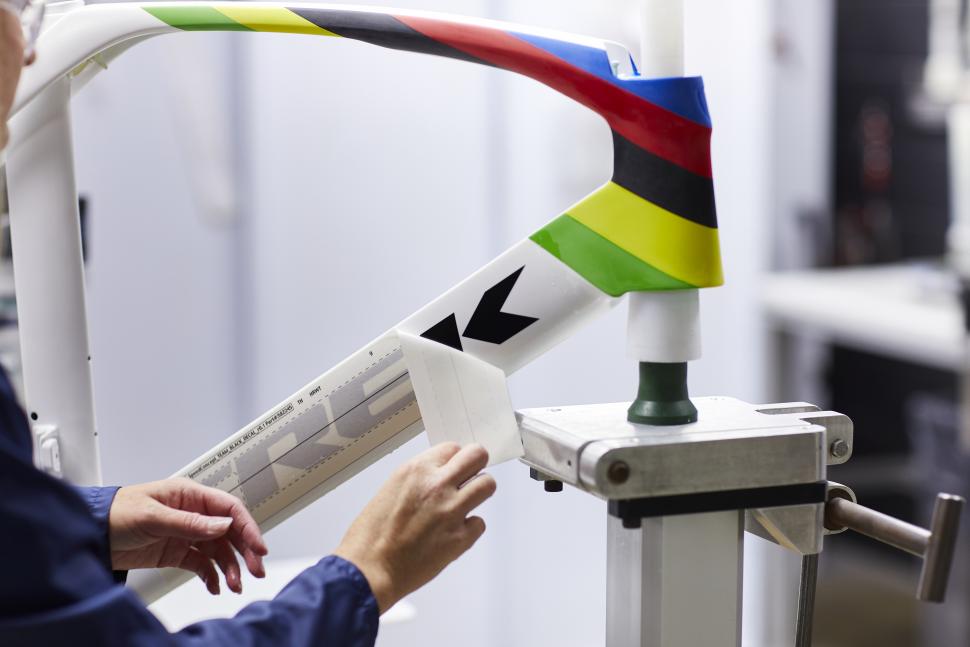 World champion bikes aren’t always very successful. This is one of the better ones, with big diagonal stripes across the head tube and top tube and the rest of the frame left white. There are small mottoes like the crossed-out Underdog written on the down tube and All or nothing on the top tube.  If only the Trek downtube logo was a touch smaller. What do you think? His bike was and is now specced with an SRAM Red eTap AXS groupset. He opted for a double chainset to suit the hilly nature of the Yorkshire course. He has dabbled with 1x setups at flatter races earlier in the season. 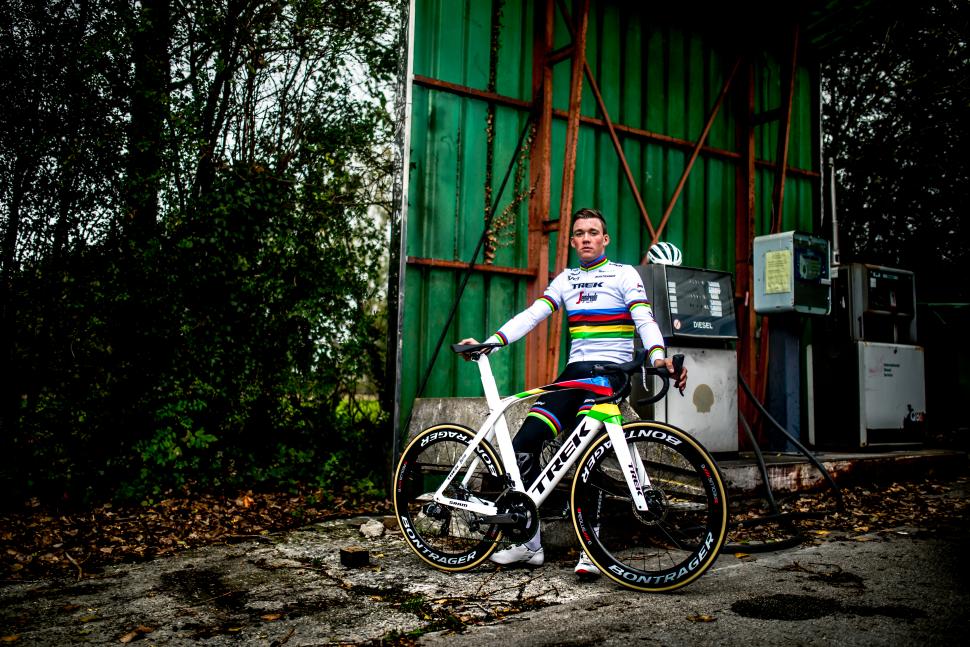 Two details stand out with the groupset. He appears not to be using a regular chainset, easily identifiable by the colour of the rings. It’s likely the team riders have ditched the biggest 50/37t that the Red eTap AXS groupset launched with for regular 53/39t chainrings. Then there is the chain and cassette. They’re not the usual silver finish. Instead, SRAM has applied the oil slick treatment it uses on its top-end mountain bike Eagle components. Asked if this will be available to buy, SRAM responded on Twitter by saying you’ve got to win the world champs! Hopefully, it’ll become an option to buy one day though. 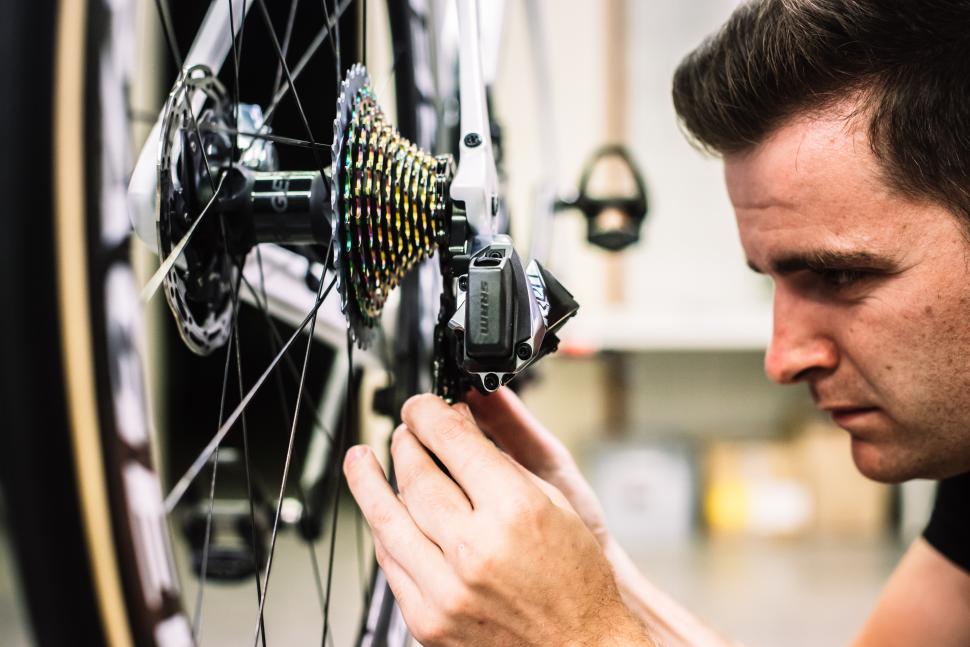 Mads Pedersen also became the first rider to win a world championship road race on a bike with disc brakes. Pedersen has been racing disc brakes most of the season and was glad to have them for the wet conditions that the race was run in.

"It was super nice to have the disc brakes on Sunday, especially because of the wet we could feel a lot safer and ride like in dry weather. Certainly, the disc brakes were super good to have in conditions like this. I think it's really important for the riders and also for the safety in the peloton - when everyone in the peloton has disc brakes it will be the best. Compared to rim brakes the way you ride, especially in the rain, changes a lot because you have the same braking power as you would have in the dry so you can still go pretty hard on the braking into the corners. In Yorkshire it helped me in the steep corners to brake later and save some energy and gain some spots for free, so definitely the disc brakes were a big advantage to help finish it off with the gold medal,” said Pedersen after the race. 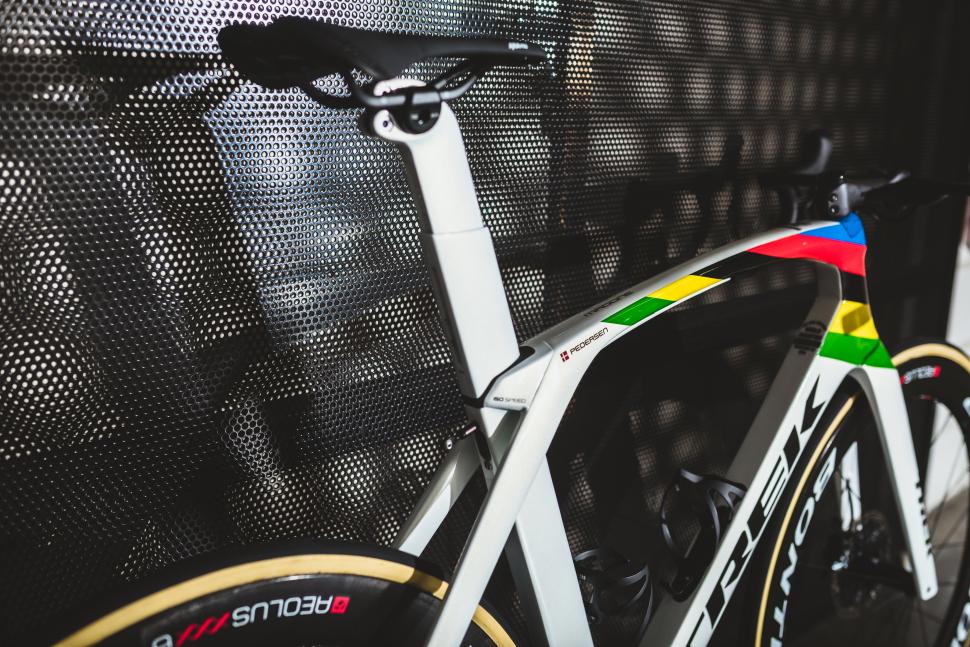 The handlebar still provides internal routing and the company claims it saves 23 seconds per hour over a traditional round bar. A Garmin Edge 2030 is fitted on an out-front mount.