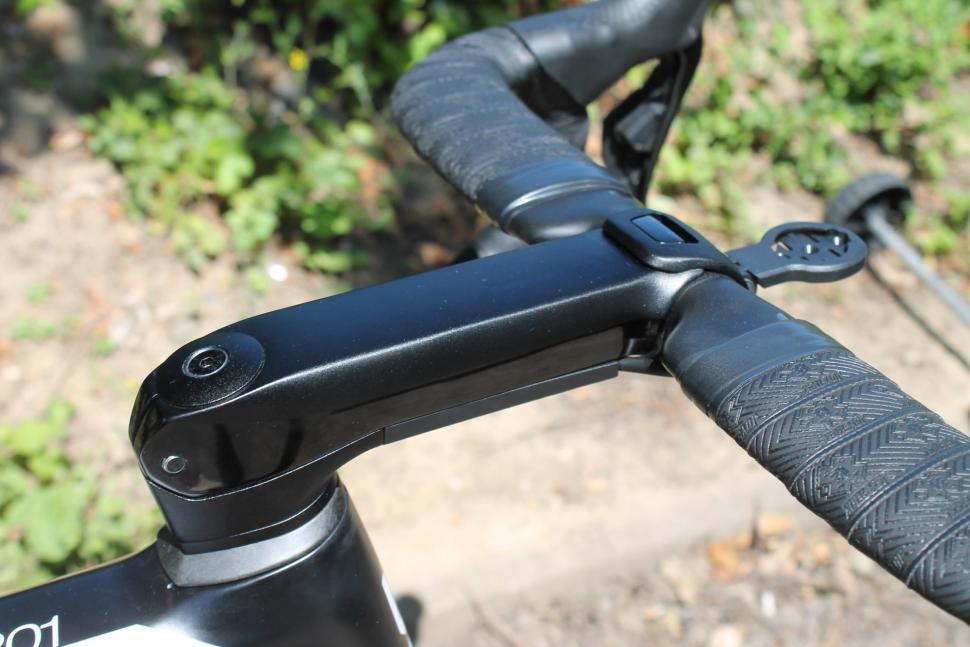 Tour de France 2019: eight of the most unique pro stems in the peloton

We've rounded up some stems from the Tour de France, and there is plenty of interesting ones amongst this year's peloton...
by Jack Sexty

Long or short? Nice and relaxed or super slammed? The humble stem is often an afterthought for us mortals; but pro riders can be pernickety, which means there is a surprising amount of variation going on with the stems of the peloton.

With superior control of their bikes and a need for speed, pros prioritise razor-sharp handling to corner and descend at speed and a longer reach to get more aero - which means more often than not, pro stems can be quite a bit longer than your average 90mm on a shop-bought endurance bike. In their quest to go as fast as possible, we're also used to seeing stems slammed at a negative angle which allow the rider to get into an even lower, more aggressive position. Here are some of our picks of the peloton that we spotted on our trip to Brussels last week... 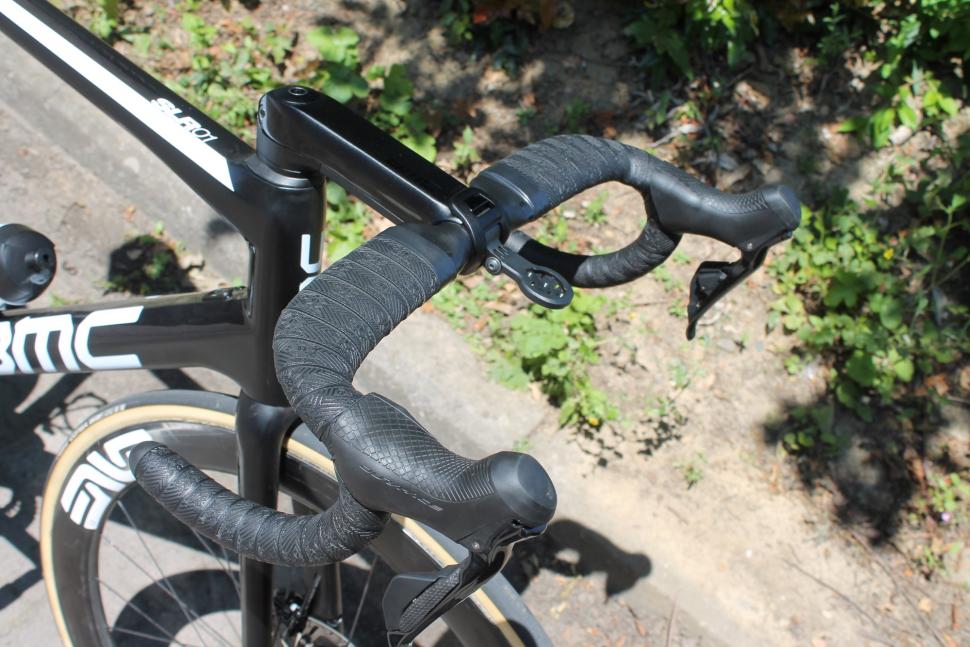 We'll kick off with the longest we spotted during our tour of the team hotels, and that was the giant 150mm stem adorning Steve Cummings' BMC Teammachine. It's BMC's own ICS stem, designed to house all the brake and gear cables internally which completes the clean front end of the bike. 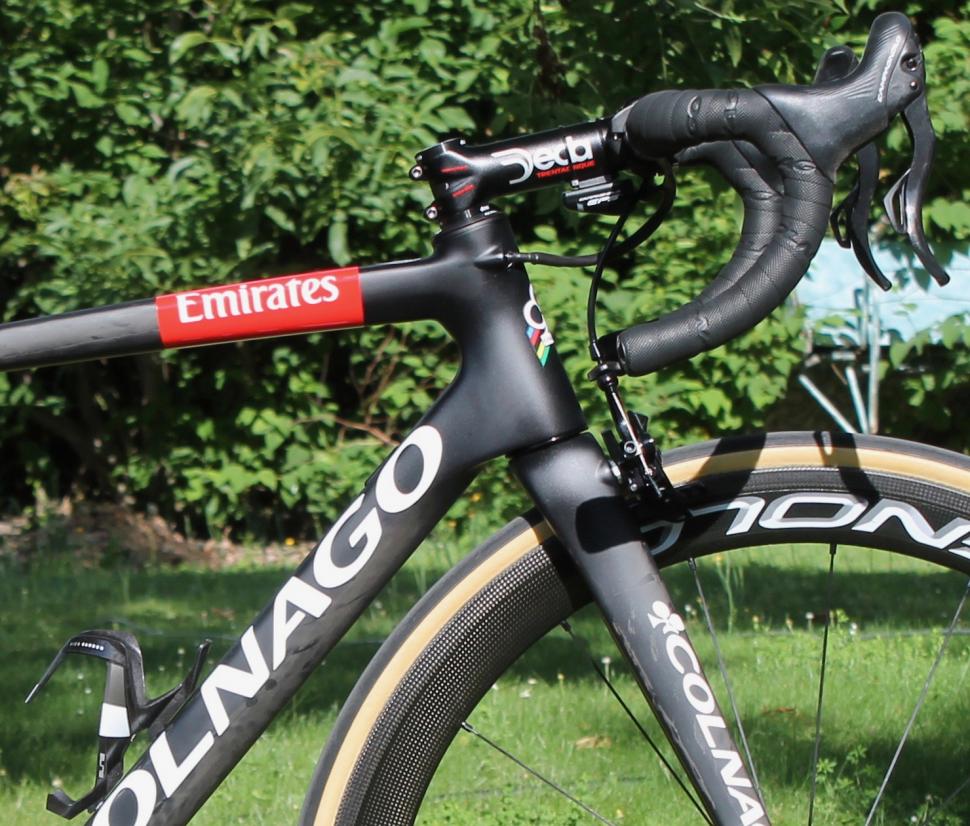 In contrast Dan Martin's cockpit on his Colnago V2R isn't quite so clean, with the EPS junction box tied to his Deda Trentacinque stem with no cables routed through it - Martin is running his stem at a comparatively relaxed angle compared to some slam-happy pros out there, although it's still pretty sizeable at 130mm in length. 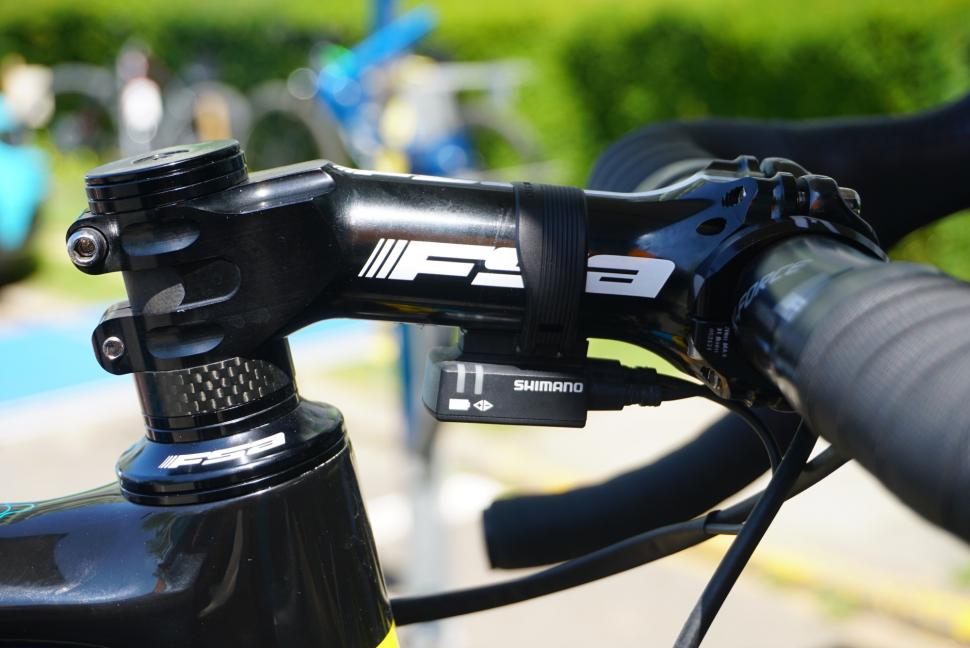 Gorka Izzagirre of Astana has opted to go super slammed on his Argon18 Gallium Pro - we believe this is one of FSA's stock alloy stem options that is angled at -17 degrees. 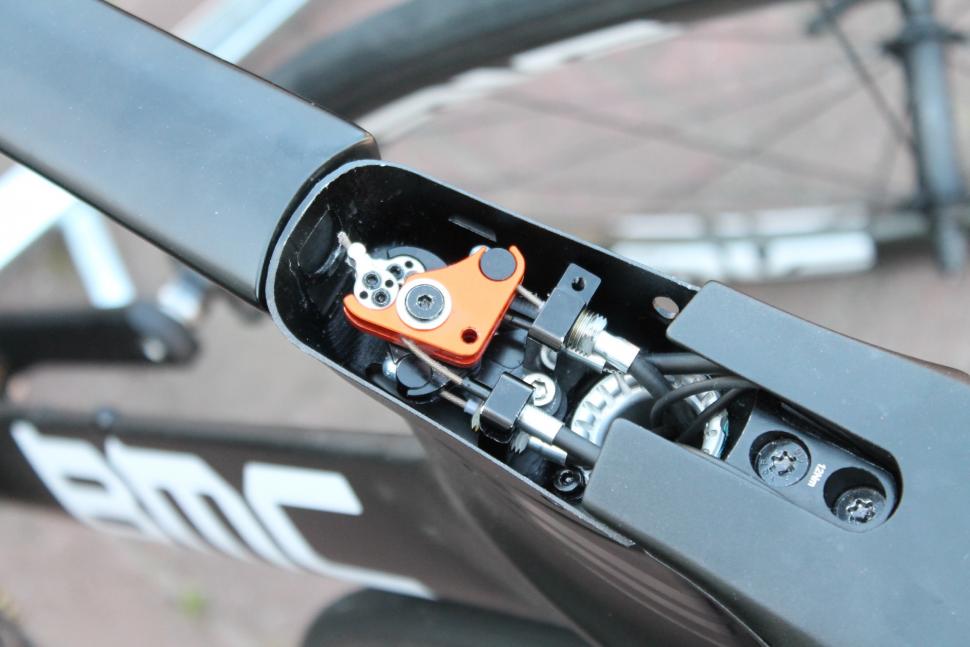 Roman Kreuzinger's BMC TimeMachine TT bike shows just how much the stem has moved on from simply the thing that joins your frame and handlebars together - here we see cables and electronics all intricately housed within it. 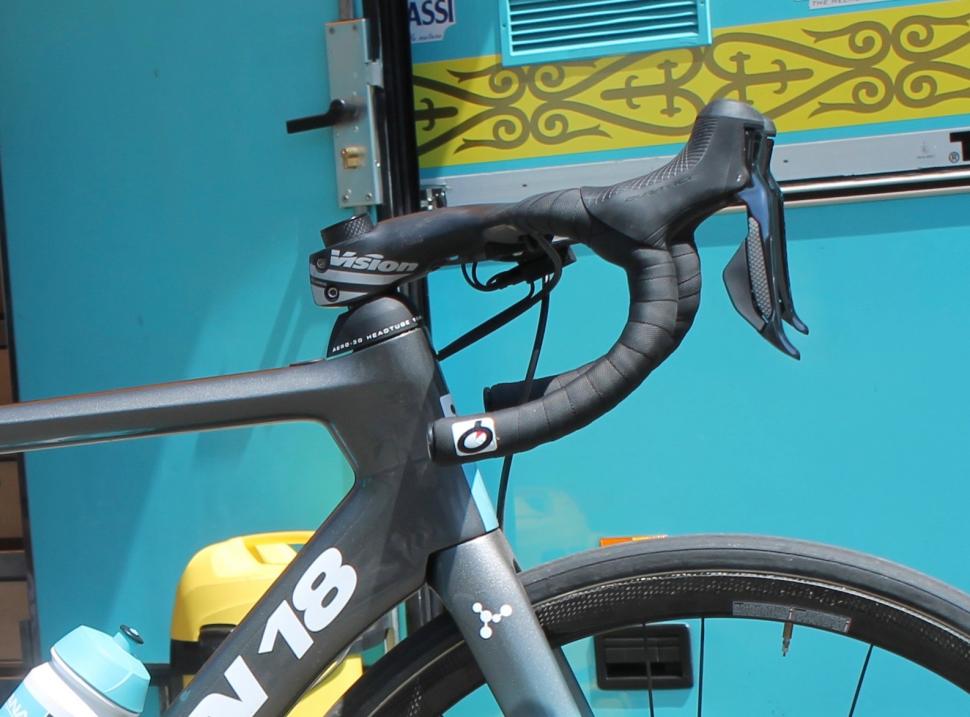 Probably our least favourite bar and stem combo at this year's Tour adorns Jakob Fulgsang's Argon18 Nitrogen Disc - it's the unfortunate lovechild of Vision's Metron 5D integrated system mixed with Argon18's 3D headtube, which requires spacers underneath and on top of the stem section. This creates a look not nearly as clean as it can be on other bikes with the Metron 5D cockpit such as the Bianchi Oltre XR4. 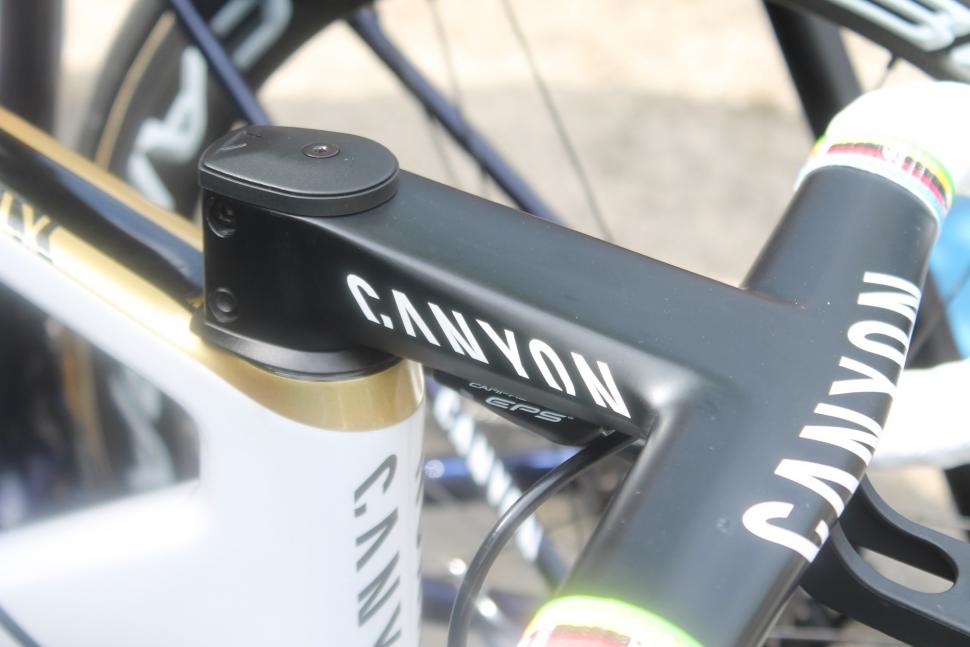 The stem on Alejandro Valverde's Canyon Ultimate H36 Aerocockpit is about the only part without some sort of rainbow stripe or gold colour theme going on. There's a port for the Campagnolo EPS junction box underneath so there's no need for it to be secured with bands, and Valverde has opted for a length of 120mm. 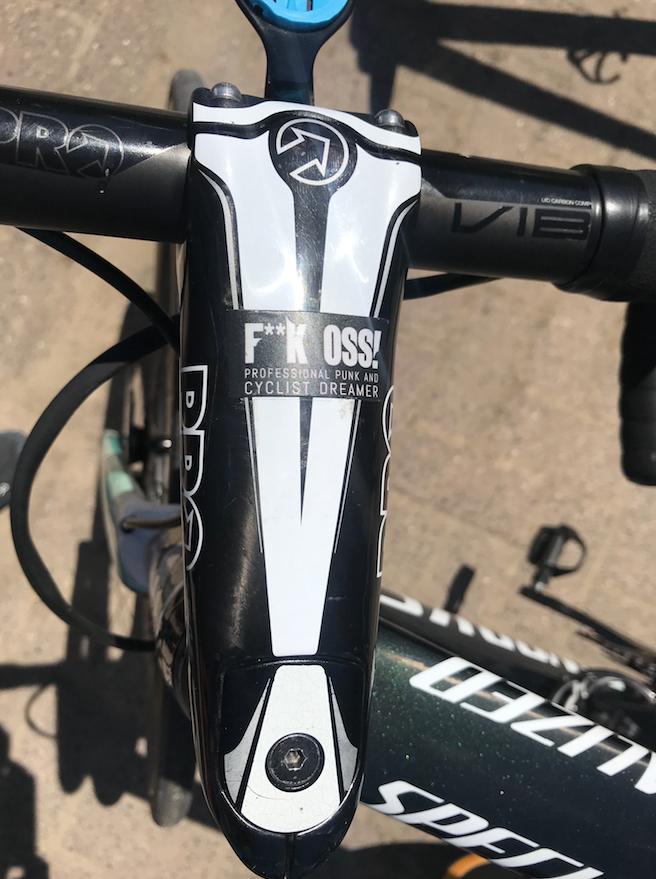 Daniel Oss of Bora-Hansgrohe, a self-proclaimed 'professional punk and cyclist dreamer' by the looks of things, has opted to stick this unusual 'F**k Oss' play on his name on his Pro Vibe sprint stem. Even though it doesn't quite rhyme, it's quite unique all the same... 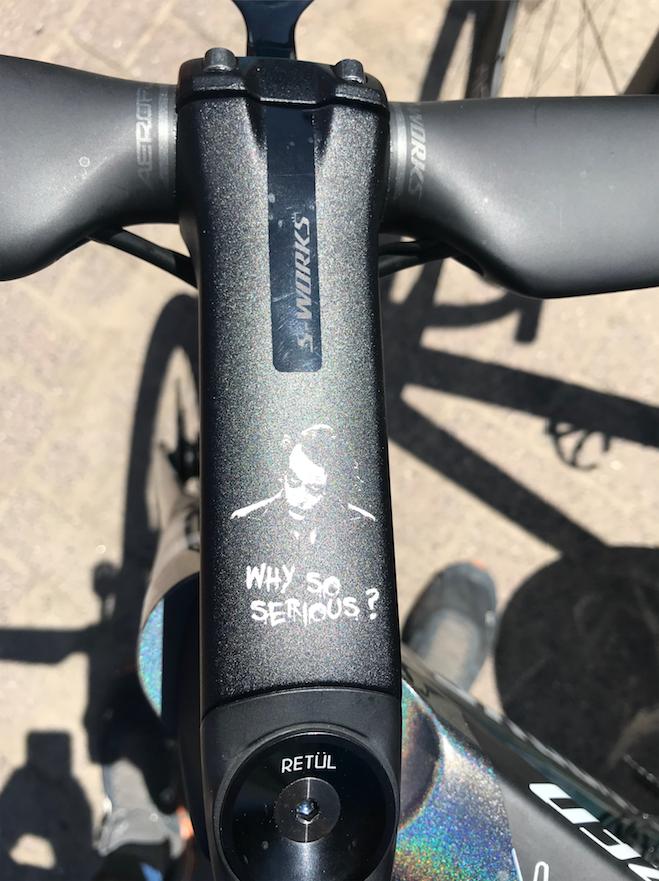 ...while his superstar teammate Peter Sagan has the 'Why so serious?' catchphrase that features on some of his Brand Sagan merchandise carved into his Specialized S-Works stem, accompanied by an image of The Joker.

What's your favourite, and have you spotted any at this year's race that we've missed? Let us know in the comments...