It’s all-new kit and bike for Chris Froome as Team Ineos has been unveiled ahead of this weekend’s Tour de Yorkshire, and Pinarello, bike supplier since 2009. has unveiled the new Dogma F12. Here’s a first look at the bike Froome will be racing this season.

“The new F12 looks special and feels it too. As riders we have complete faith in Pinarello. We know we will be able to compete for the biggest races in the world on the F12, as we have on all of their bikes since the team’s inception. I can’t wait to race on it for the first time at the Tour de Yorkshire, and it seems fitting that we will be on a brand new bike as we start racing as Team Ineos," says Froome of his new bike. 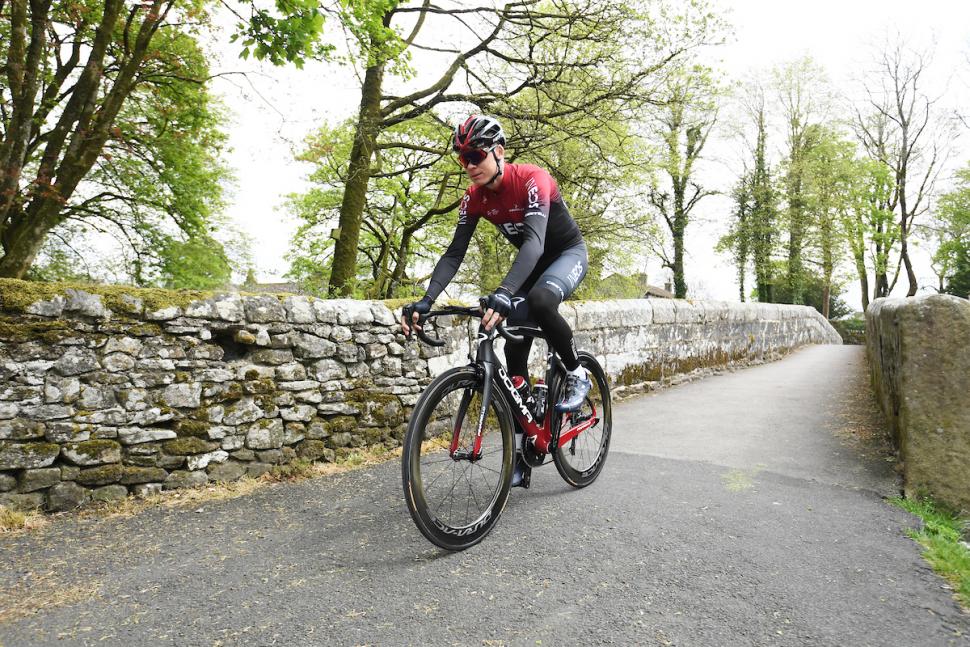 If you missed the launch of the new Dogma F12, the successor to the Italian company’s Dogma F10 which Team Sky had been racing since it was launched in 2017, you can read all the juicy tech details here. In a nutshell, it’s more aerodynamic, stiffer and lighter, as you’d hope and expect for a brand new race bike. 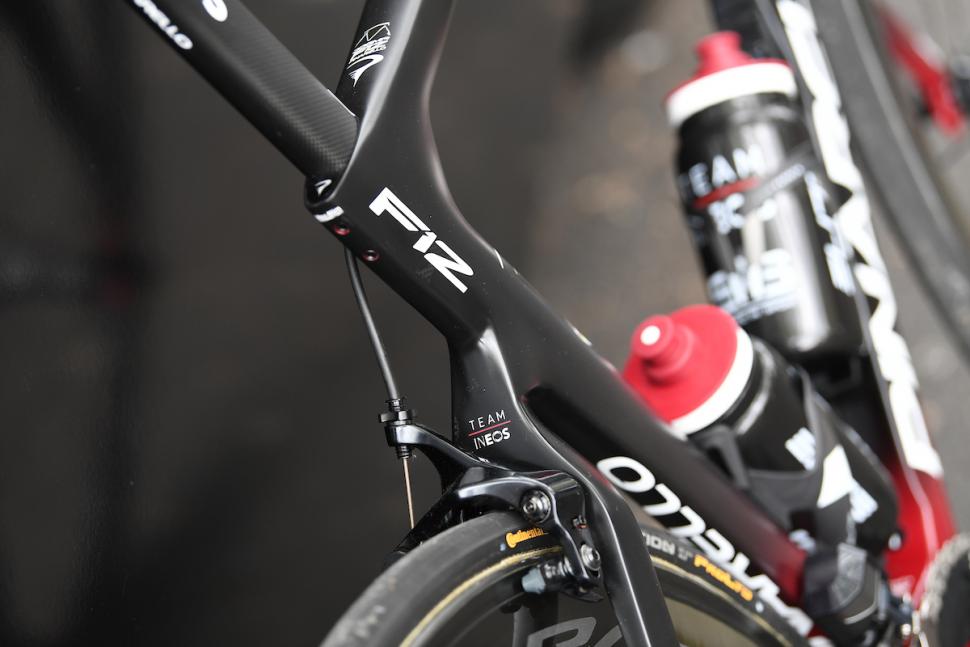 The changes aren’t radical, it’s definitely a case of small revisions here and there, proof that gains are becoming harder to find in the pursuit of advanced performance.

What is radical is the newly kinked top tube, a shape clearly borrowed from the company’s Grevil gravel bike launched last year. Also more shapely than the old bike are the wavy fork blades, a throwback to older Pinarello models, and curvier rear stays. 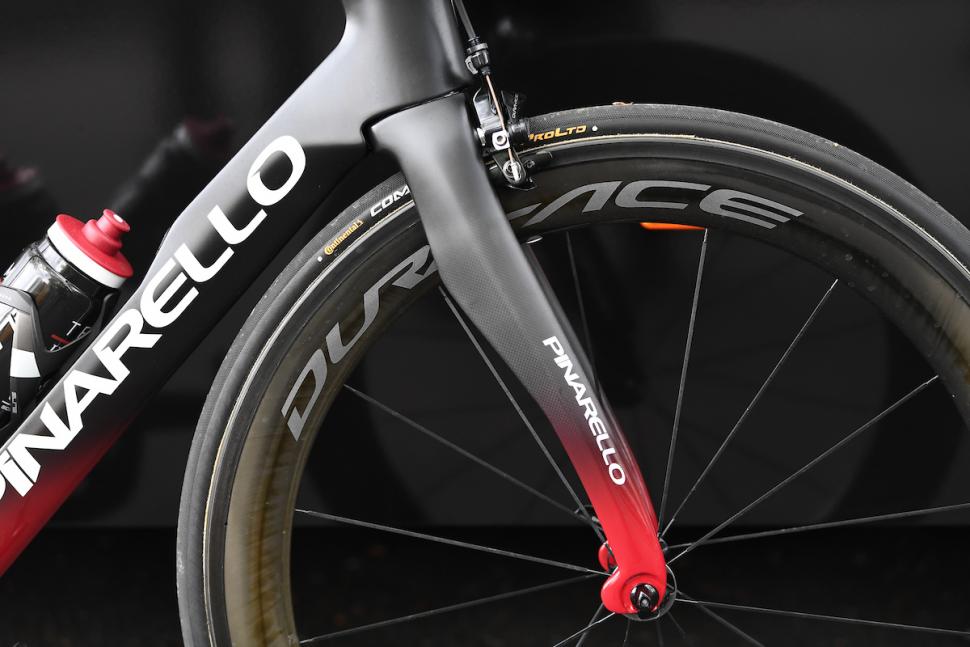 Aside from the new frame and fork, it’s the same tried-and-tested equipment for the rider who hopes to win the Tour de France this summer. He relies on a  Dura-Ace Di2 groupset with his distinctive O-symmetric non-round chainrings that he prefers over regular round rings. He’s a tall chap so it’s 175mm crank arms with 52/38t chainrings. 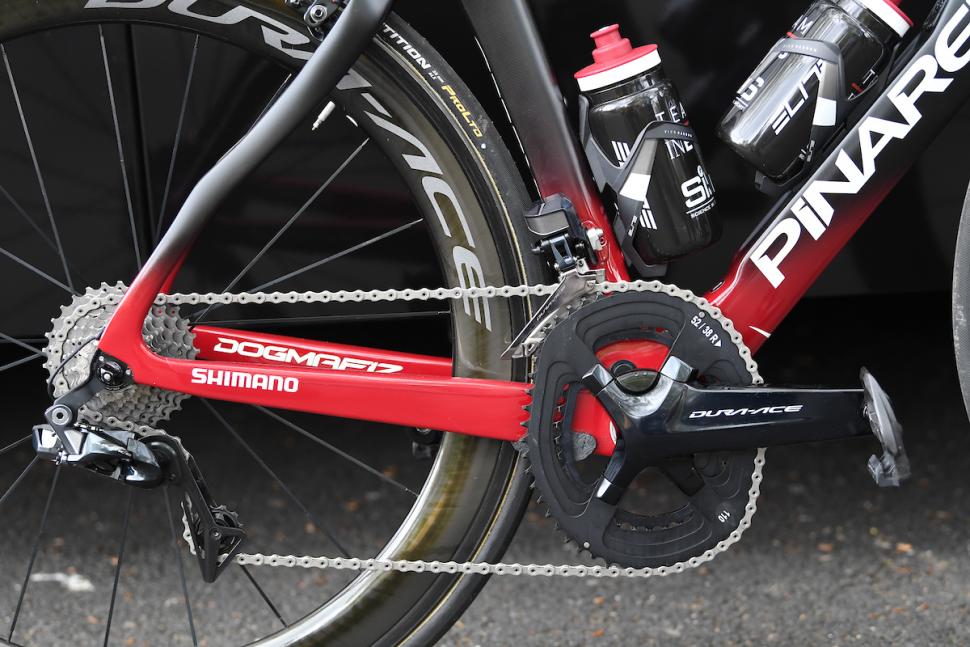 He’s still the only rider on Team Ineos that prefers this setup - strange that no other rider has followed his lead really.

He is using Shimano’s SPD-SL pedals, which the rest of the team do so in the event of a bike swap there’s no issue with pedal compatibility. So we know Chris would prefer to leg it up the road and wait for a replacement bike given the chance… 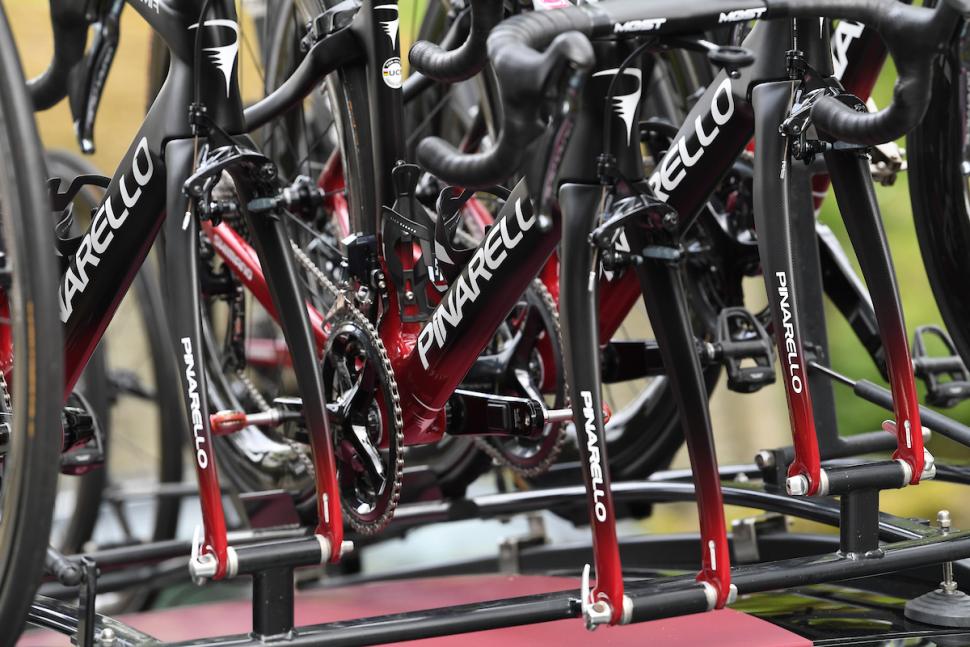 Shimano also supplies Dura-Ace carbon fibre tubular wheels, pictured are the C60s which, yes you guessed it, have a 60mm deep section rim. He’ll likely ride the shallower C40 wheels when the race hits the mountains. They’re tubular wheels and shod with Continental Competition ProLTD tyres - you can’t buy these as they have a latex inner tube over the butyl inner tube of the regular Competition tubs to save a bit of weight. 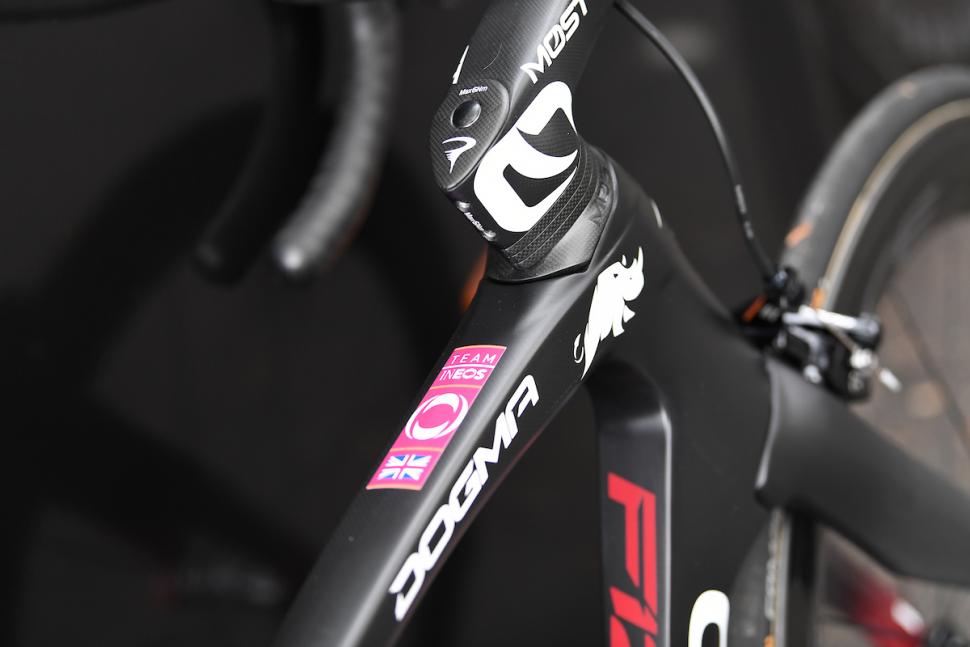 The new Dogma F12 moved to direct mount brakes, many many years after Shimano first introduced this new standard of attaching a rim brake caliper to the frame and fork, and many years after most bike brands adopted it. 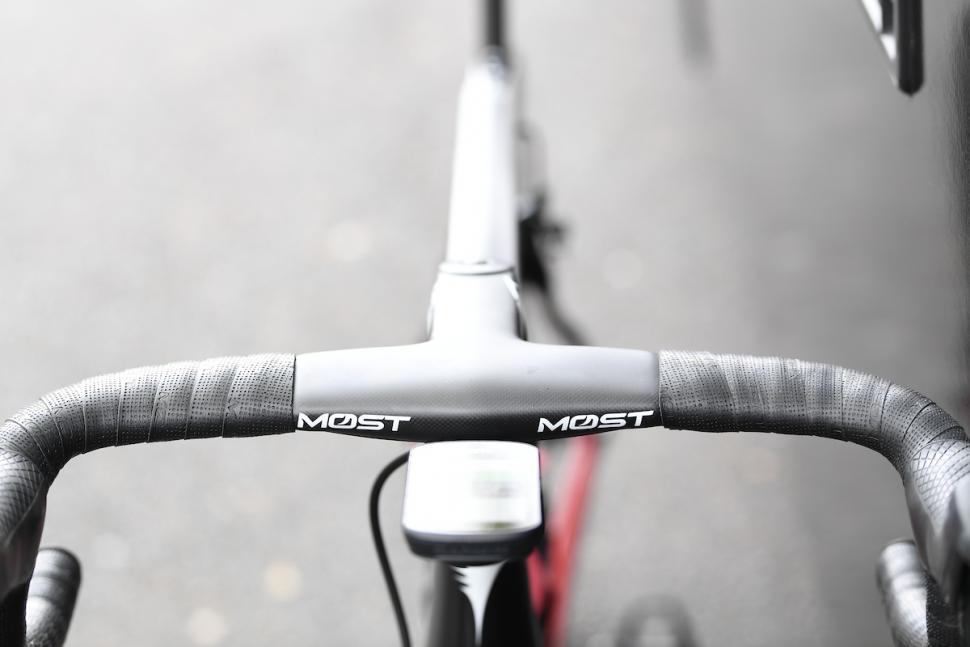 Onto finishing kit and it’s the new Most Talon Ultra handlebar. It’s a one-piece handlebar and stem moulded in carbon fibre and the big news here is that all the cables are internally routed, inside the handlebar, through the stem and into the frame around the steerer tube. 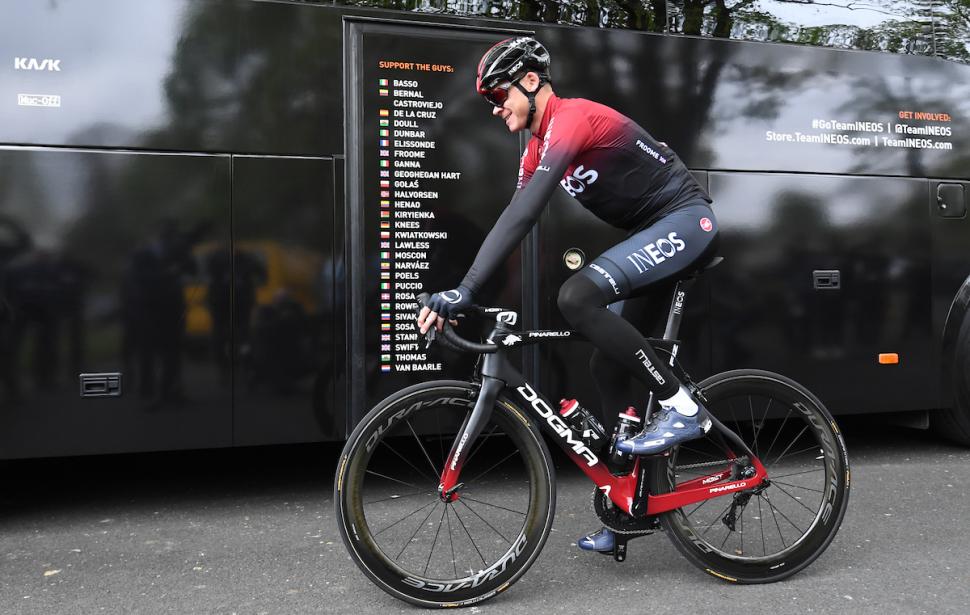 Bolted to the underside of the handlebar is an out-front mount for the Garmin Edge computer that Chris and the rest of the Ineos team use to record data when training and racing. 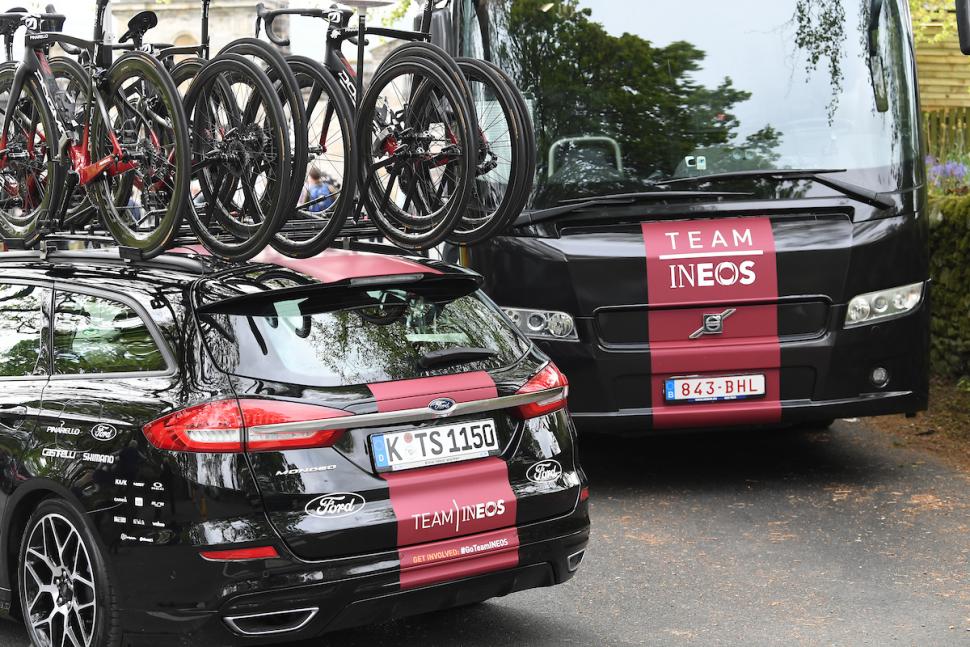 Even the cars have got some fresh new liveries.