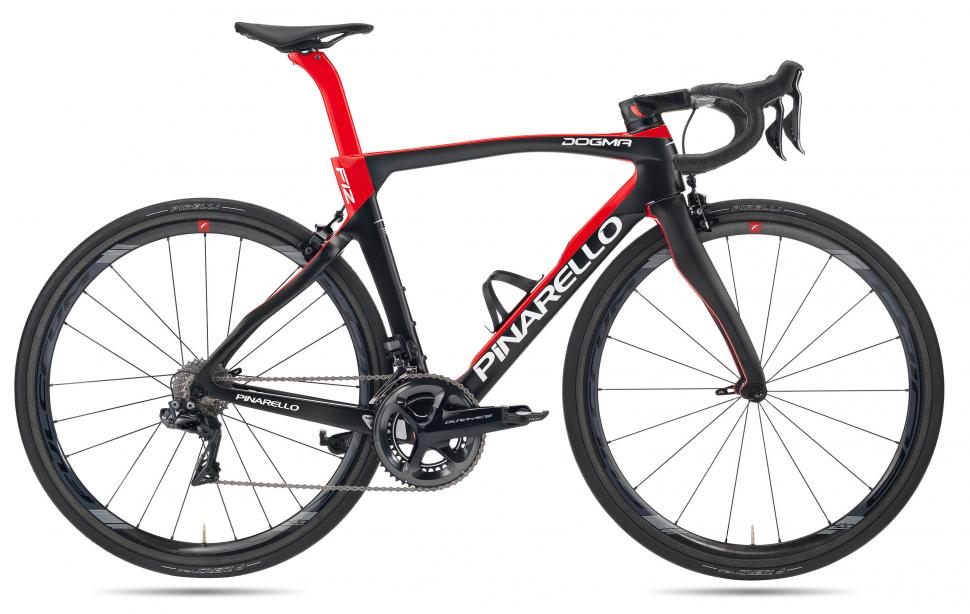 Team Ineos won’t just have an ugly new kit to wear for the rest of the season, they’ll also be competing aboard the brand new Pinarello Dogma F12 and Dogma F12 Disk.

Unveiled today, the successor to the Dogma F10 is claimed to reduce drag by 7.3%, equating to an 8 watt saving at 40kph (25mph) and has been designed from the outset with disc brakes, alongside a regular rim brake version, thus keeping both camps happy. 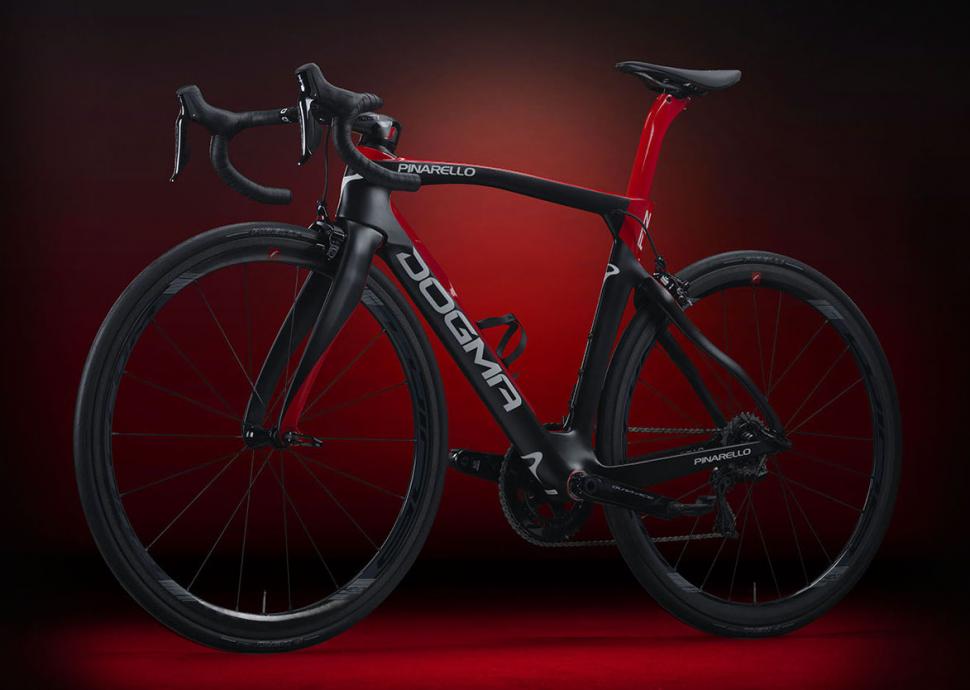 Pinarello has offered disc-equipped Dogmas in the past but they’ve merely been an afterthought, disc brakes tacked onto a frame originally conceived for rim brakes. With the Dogma F12 the Italian company has developed both a rim and disc brake version on two development paths, with fundamental technology shared across both but different approaches where required, such as the new 40% stiffer fork on the disc bike. The rim brake model also moves to direct mount brakes years after they were first introduced by Shimano.

How much this decision to continue to support rim brakes comes down to Team Sky’s, sorry Team Ineos, preference for rim brakes is unclear. Pinarello has worked with Sky since the team founded in 2009 and it’s clear the team has been quite involved in the development of the Dogma race bike.

The Dogma F12 replaces the F10 which was launched in 2017, and which replaced the F8 before it. Yes, Pinarello doesn’t like odd numbers for some reason, and it’s not alone: Cannondale also skipped from 10 to 12 with its CAAD road bike a few years ago.

A focus on finding more aerodynamic savings has been a key focus of the new Dogma F12.  The frame profiles have clearly changed from the previous bike, with some of the curves the company was once famous for being reintroduced in different places, such as the kinked top tube. We first saw that on the Grevil gravel and adventure bike.

Explaining the reasons behind the new aesthetic appearance, Pinarello says this: “Developing the Dogma F12 frame we started from a design concept that could pursue the Pinarello’s tradition as style icon but then every aesthetic element was analyzed and modified until it guaranteed a significant aerodynamic or structural improvement.”

“The result is a frame that from the aesthetic point of view shows a remarkable leap forward from previous generations but at the same time, it achieves the best aerodynamic efficiency values of any Dogma model to date. “

The Flat Back down tube profile is retained from the previous Dogma F10, but has been modified with a narrower width, and it has also looked closely at the junction where the head tube, down tube and fork crown meet to improve airflow as much as possible. The head tube meanwhile now has a larger 1 1/2in upper bearing to provide the extra space necessary for the internal cable routing.

A key aim of the Flat Back downtube when it first appeared on the previous Dogma F10 was to reduce drag around the water bottle. With the F12, it has reshaped the bottom bracket to allow the cage to be mounted 5mm lower and helping to improve airflow around the bottle. 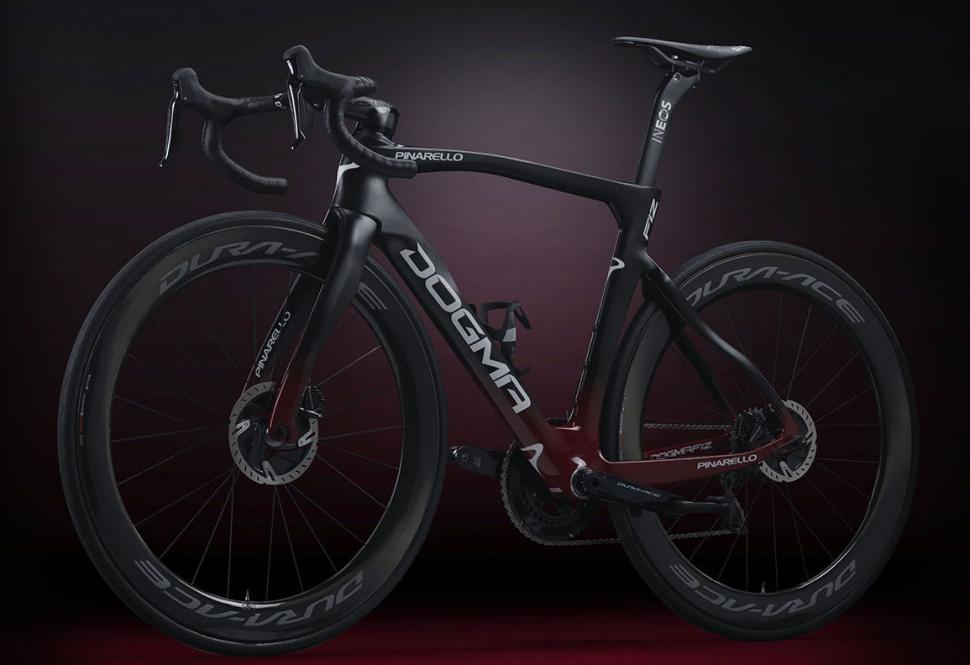 The fork has been lightly updated with a large profile top section of the fork legs that helps to improve airflow over the top half of the fork. On the F12 Disk the drag has been reduced by 15.7% compared to the F10 Disk.

Developing the F12 Disk was a high priority for the Italian firm. In the past, the disc brake version of the Dogma has appeared a simple afterthought, but that is no longer the case, and it shows in the aero claims being made for the new disc-equipped Dogma. 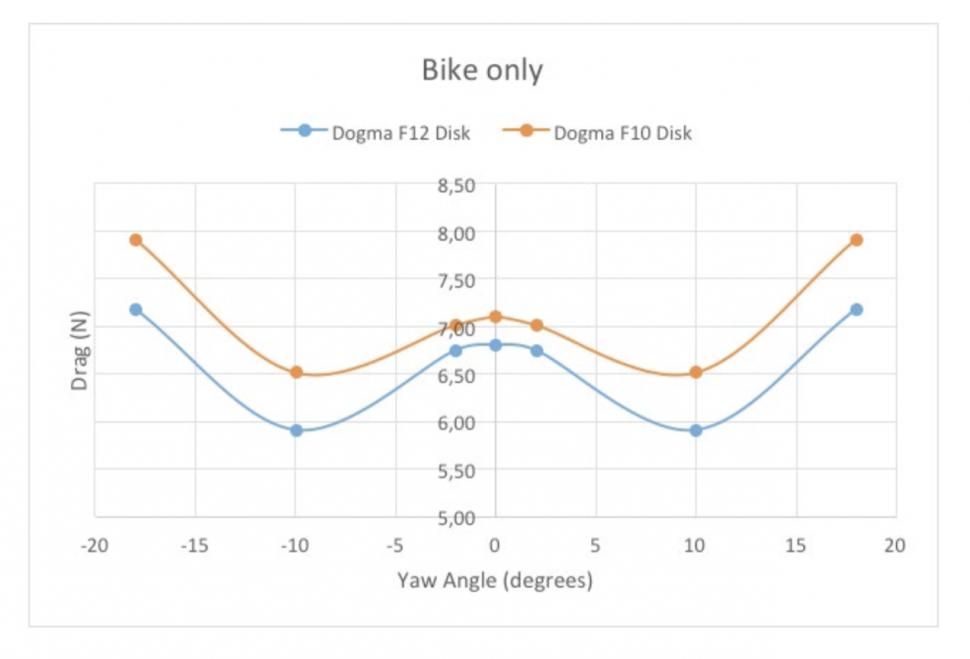 The new bike provides an average 7.3% reduction in drag. At every yaw angle tested- that’s the direction of the wind coming at the bike - the new Dogma F12 Disk produces less drag than the Dogma F10 Disk.

But wind tunnel testing without a rider is largely meaningless, so Pinarello has duly tested the bike with a rider and these results are quite different, as you can see below. Overall drag reduction reduces to 2.8% but the company still claims an 8 watt saving at 40kph compared to the F10 Disk. Pinarello says some of the savings were achieved by housing as much of the cables inside the frame as possible. It reckons CFD testing showed that its new handlebar and headset design reduced cable drag by 85%, with the remaining 15% due to the short sections of housing exposed to the wind and unavoidable as they are the connections to the brakes.

The result of the new frame and fork is the aforementioned 7.3% drag reduction compared to the F10.

Adjustment of stack height is still possible, with a range of 40mm of adjustment owing to special interconnecting headset spacers. A regular handlebar and stem can still be used with the Dogma F12, you’re not tied into using this new setup. Away from the aerodynamic improvements, Pinarello has also improved the stiffness to ensure the new bike hits the desired goal of “maintaining the all- around” characteristic, which means a stiff and light bike, with excellent aerodynamic balance” leading to what the Italian company calls the “Pinarello feeling.”

A redesigned bottom bracket and beefed up chainstays improve stiffness by 10% compared to the F10, a new fork on the disc brake model reduces twisting from the disc brake forces by 40%, and the new handlebar is 8.6% stiffer and 10.3% lighter than the Talon Aero. Other key changes are improved tyre clearance, the Dogma F12 will now take a 28mm tyre. There’s compatibility with all mechanical and electronic groupsets with fully internal cable routing.

The frame is still made from T1100 1K Dream Carbon with Nanoalloy Technology with a claimed weight, for a raw unpainted frame (that’s just cheating!) of 820g. The Dogma F12 Disk is just 20g more at 840g. It won’t have escaped your notice that disc brakes are popular with many of the latest road race bikes designed exclusively around disc brakes. Previously disc brakes have been given little consideration by Pinarello but the Dogma F12 development actually comprised two separate bikes, one with discs and one with rim brakes.

It has enabled Pinarello to meet the growing disc demand whilst not alienating those who prefer rim brakes, but does seem a hefty investment to essentially design two different bikes.

“We are facing a situation in which on one hand, there is the natural evolution of the cyclist's needs towards disc brakes due to their safety and constant performance. On the other hand, there are those who still prefer a bicycle with traditional rim brakes due to weight savings,” explains Pinarello.

“This way we were able to apply common improvements, but at the same time study specific and dedicated technical solutions for each model.”

All eyes will be on the new team and its new bikes at the Tour of Yorkshire starting this weekend.