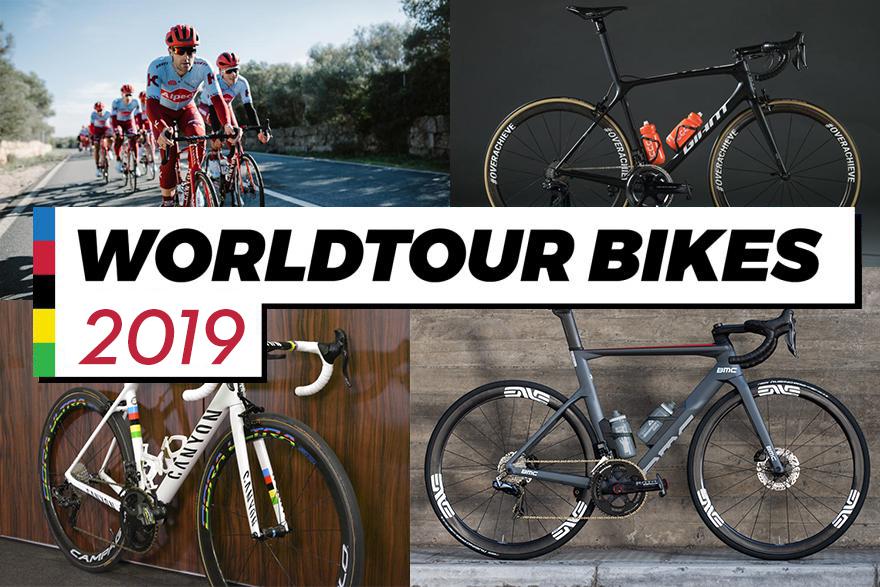 Lots of bike sponsor changes over the winter, here a guide to who's riding what this season
by David Arthur @davearthur

2019 sees a lot of change in the WorldTour professional peloton, with more bike sponsor reshuffling than we’ve seen in many years. The peloton still consists of just 18 teams with probably the biggest change being the end of BMC Racing, replaced by the new CCC Team.

And those bike sponsor changes at a glance:

The rest of the teams stick with the same bikes they used in 2018, so Team Sky are still on Pinarello and Specialized and Canyon each supply two teams, and it's a welcome back to Eddy Merckx, the Belgian brand not seen in the WorldTour for a few years, but it means goodbye to Factor.

Groupset battle dials up to 12

On the groupset front, Shimano continues to dominate with its Dura-Ace Di2 being the clear favourite. Campagnolo supplies three teams and there’s expectation that its new 12-speed Super Record and Record will make an appearance so of course, many observers will be worried about the implications for neutral service, despite neutral service being less relied on than in the past with riders preferring to wait for their team cars to swap wheels or bikes.

There is a bigger SRAM presence than in many a year, with the US company adding Trek-Segafredo to its roster along with continued sponsorship of the Katusha team. That'll help promote its brand new Red eTap AXS groupset, which goes 12-speed along with a number of other radical changes. You can read all about them in the first ride below.

With SRAM and Campagnolo teams now riding 12-speed, it just leaves Shimano with 11-speed. Are we likely to see an extra sprocket on the new Dura-Ace when it's updated? Some speculators think that'll happen this year and if it does any launch will likely be before the Tour de France. Disc brakes in the peloton

There's been a lot of “will they won’t they” about disc brakes appearing in the pro peloton up until now, but this year marks a significant turning point as several teams have committed to disc brakes, and a few others are trialling them at more races.

Most notable is the Deceuninck - Quick-Step which has won many races this year all aboard disc-equipped Specialized bikes.  Katusha Alpecin also announced it'll only race disc brakes this year, and we've seen Sunweb, CCC, Dimension-Data and EF Education First racing disc brake bikes this year. The one big team that hasn't even touched disc brakes is Team Inneos. We can't see that changing anytime soon.

Let's take a look at who is riding what in the 2019 pro peloton, but as we’ve yet to see all the new bikes we’ll update this guide over the coming weeks so tune back in for those updates. 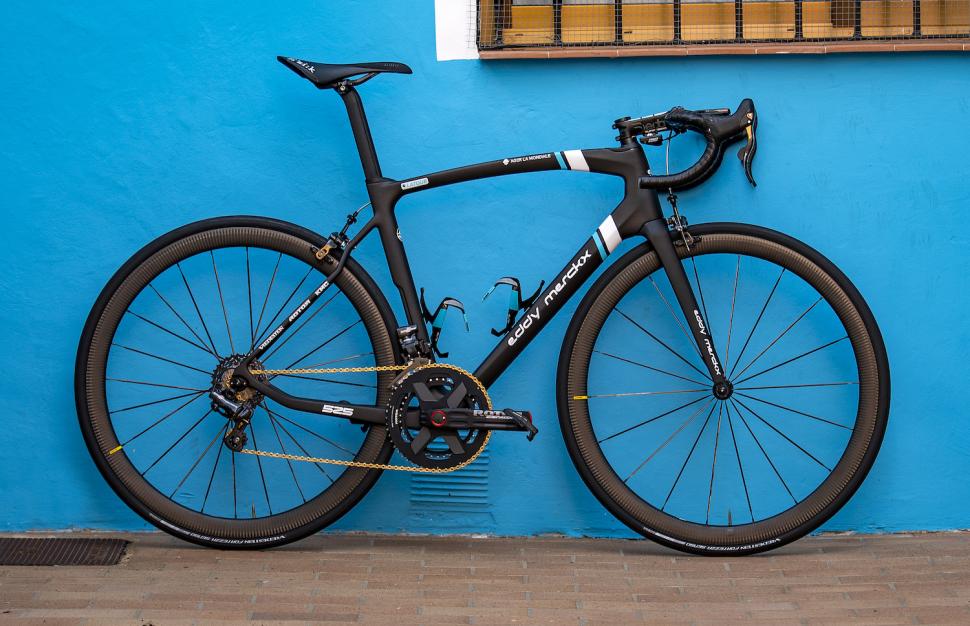 The French team had been riding Factor Bikes but has switched to Eddy Merckx Bikes for 2019. We’ve not seen the Merckx brand in the peloton for a few years so it’s a welcome return - it’s a long time since the bike company enjoyed much success with the Quick Step team and Tom Boonen. Will this new partnership resurrect previous winning ways?

We’ll take a more detailed look at the Eddy Merckx race bikes soon, they’ve got some updates to their flagship models lined up for this new sponsorship. 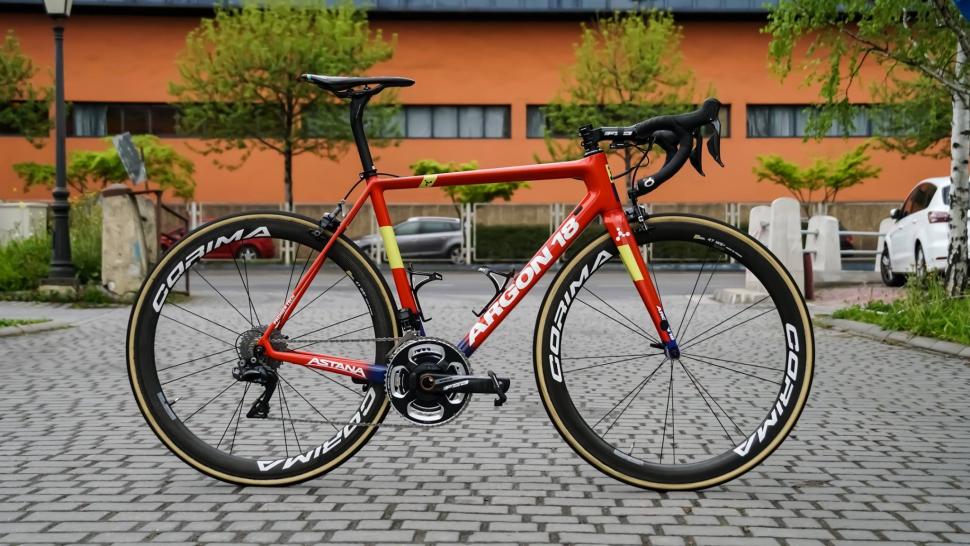 Astana continues to be sponsored by Canadian bike brand Argon 18. It provides a choice of models, from the Gallium Pro pictured above to the new Nitrogen Disc below. The team is the only outfit to use the lesser spotted Corima carbon wheelset, combined with Shimano Dura-Ace Di2 groupsets and FSA K-Force chainsets and matching finishing kit. 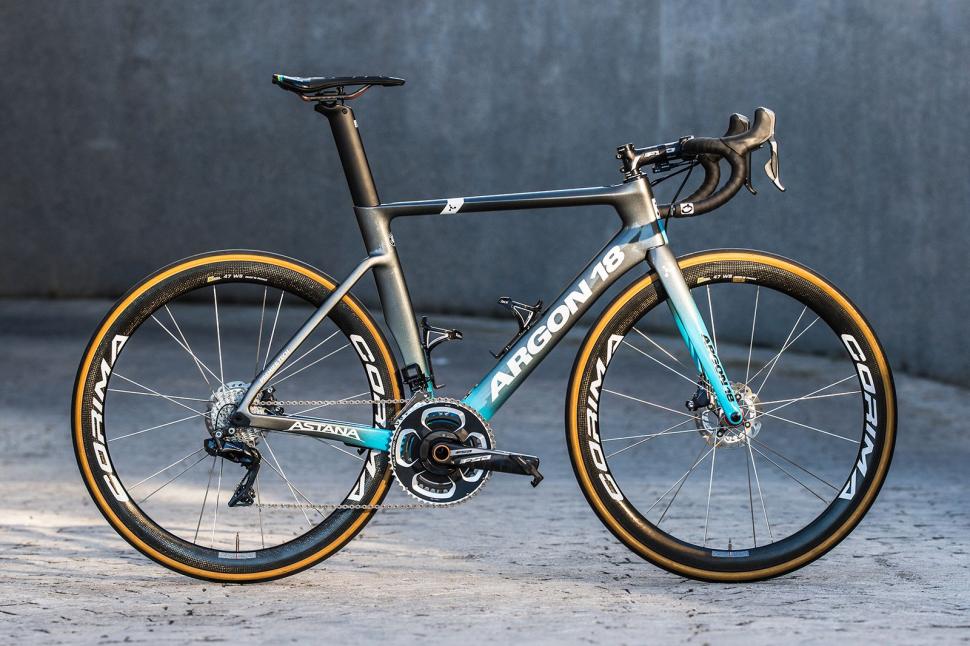 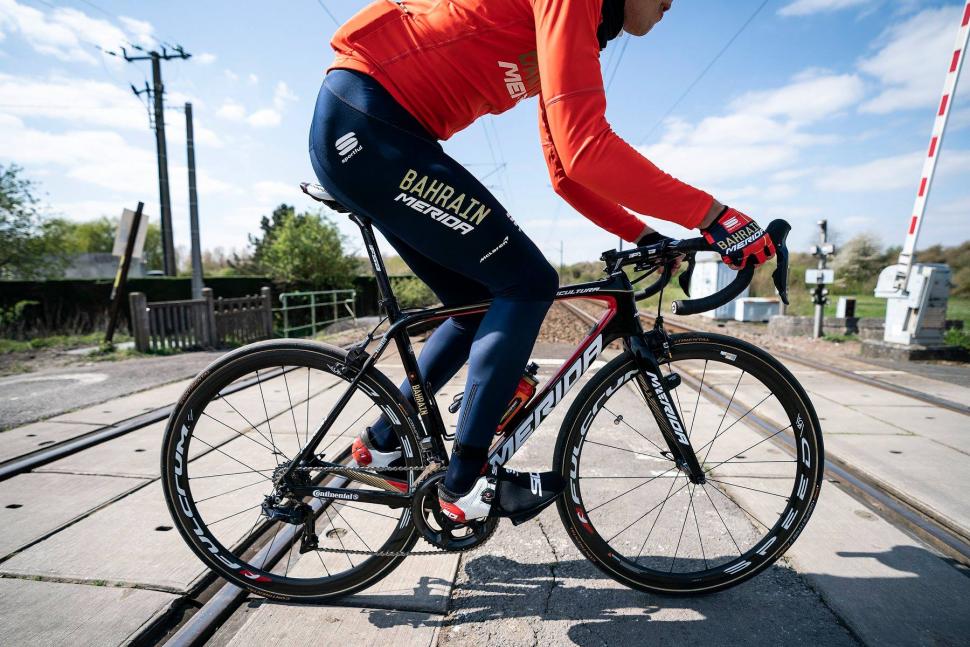 This team sticks once again with Merida bikes and Shimano groupsets. Merida is one of the biggest bike companies in the world and probably doesn’t need to sponsor a pro team, but it does and likely hopes it’ll raise its profile with those customers in the market for a new race bike. It gives the team the lightweight Scultura and aero Reacto. No huge changes here, with Peter Sagan’s team still rolling on Specialized bikes. Expect to see the disc-equipped aero Venge getting a lot of show time and winning races, while the Tarmac in a choice of rim or disc brakes will be used for hillier stages and the Roubaix for the cobbled classics. Last year Sagan switched between rim and disc brakes depending on the individual race, will he do the same again this year? Born from the ashes of the BMC Racing team, this squad will bring a fresh new look to the peloton with its bright orange team kit. You’ll also need to get used to seeing Olympic champion Greg Van Avarmaet on a Giant bike this year complete with mostly Giant branded equipment, save for the Shimano Dura-Ace Di2 groupset. But helping to spot him is the special gold paint job the Olympic champion rides. Most of the team have been spotted riding the TCR Advanced with most leaning towards rim brakes, but a few riders have been using disc brakes. The company also provides the Propel aero race bike for the sprinters and breakaway specialists. A big change for the South African team which switches from Cervelo to BMC this season so sprinter Mark Cavendish will have to swap his long-time Cervelo S5 for the Swiss company’s new Timemachine aero road bike (picture below), which is only available with disc brakes. That didn't stop Edvald Boasson Hagen winning the first stage of the Criterium du Dauphine.

The BMC up top is the Teammachine and it's the all-round race bike that'll see most action this season. Equipment will be Shimano Dura-Ace Di2 groupsets with Rotor cranks and Enve wheels 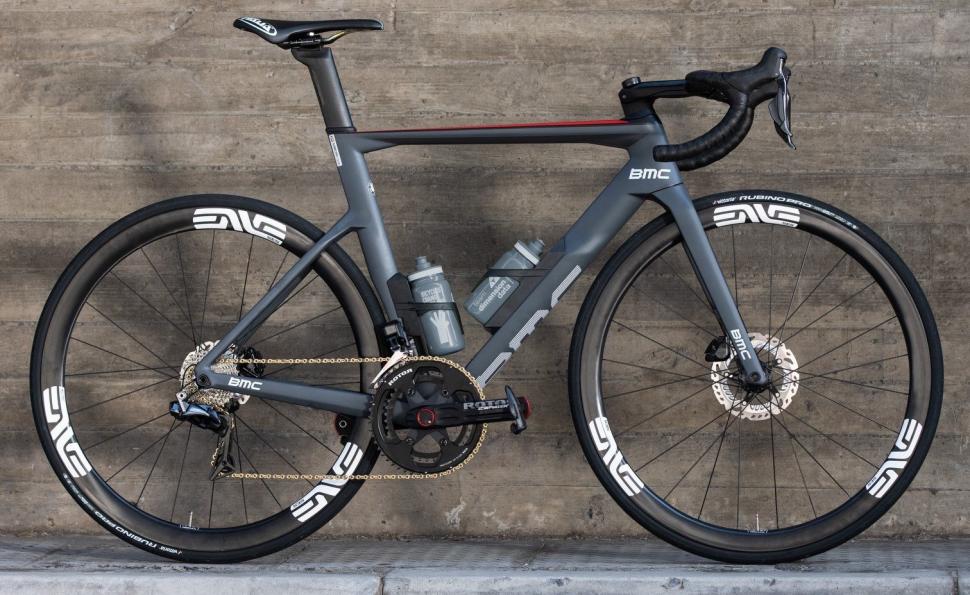 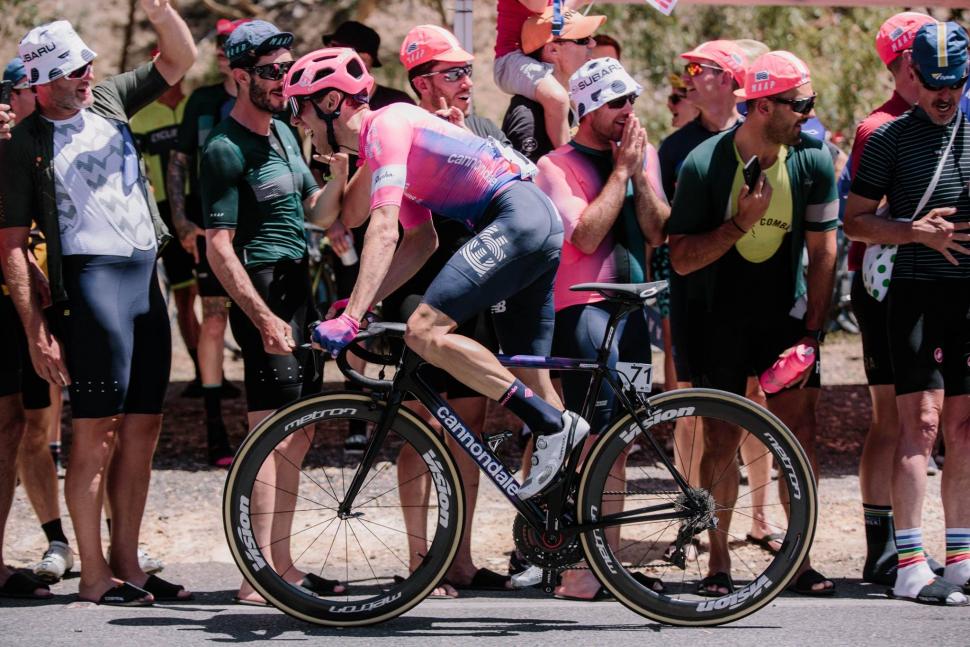 Despite public sponsorship struggles, this team battles on and once again retains the backing of Cannondale who will supply the team with its first aero race bike, the brand new SystemSix which, as you know, is only available with disc brakes. It’ll also have the classic SuperSix, which we reckon must be due for an update soon, and the Synapse for the classics. The new team hasn't been unveiled yet but we're pretty certain they'll stick with Dura-Ace Di2 groupsets with FSA cranks and Vision wheels. That is a 2018 bike pictured above. 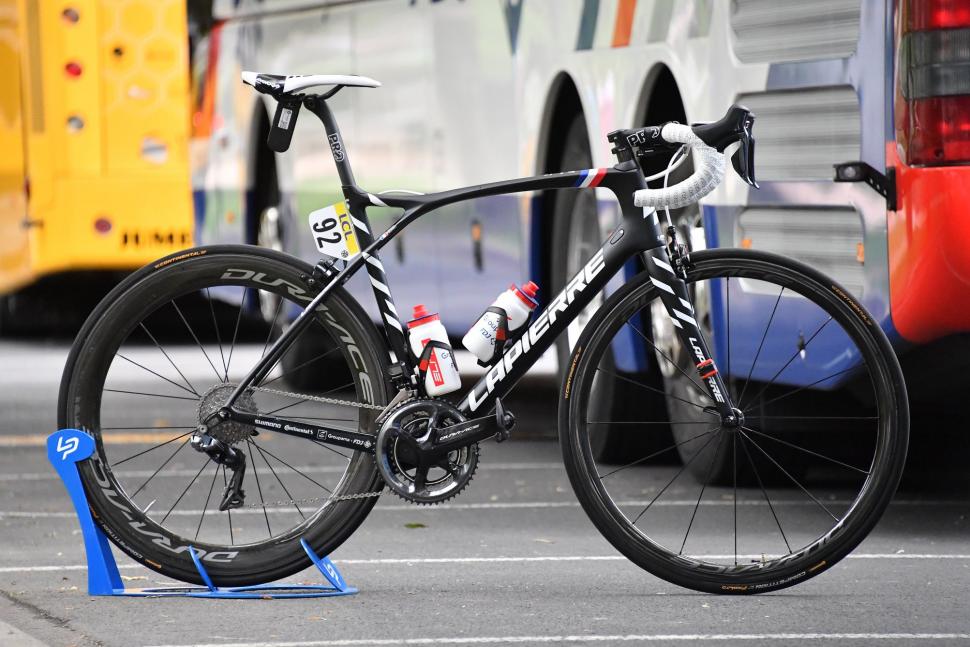 The French Groupama–FDJ team continues to race Lapierre bikes this season, with the Xelius SL above the bike that most of the team will use. They'll also have the Aircode SL aero race bike for fast and flat stages. The Xelius SL is a bike that is constantly evolving, and changes this year revolve around a newly integrated seat clamp and recessed head tube that presumably improves aerodynamics and provides a lower handlebar position. Katusha stays with Canyon Bikes for another year and made a big commitment a few weeks ago in announcing that the full team will race the season on disc-equipped race bikes.

The disc brake roll-out has been far from smooth with many high profile incidents over the years but Katusha is one of a growing number of teams that have completely switched over to discs. Canyon provides the bikes, the Aeroad and Ultimate, and SRAM the hydraulic disc brakes with its latest Red eTap AXS wireless groupset. It’s the same fleet of celeste Bianchi race bikes for the Dutch team with the Oltre XR4 the go-to model. We expect the team to also continue to use Shimano Dura-Ace Di2 groupsets with matching wheels. There are no major changes for Lotto-Soudal this season. They're racing the same Ridley bikes, a choice of the aero Noah and lightweight Helium, with  Campagnolo Super Record EPS groupsets and Bora Ultra wheels. It’s probably about time for a new bike or update of some sort from Ridley this year. The Aussie team notched up its first Grand Tour victory last season and will be aiming for the top step of the podium again this season. It’ll be campaigning aboard Scott Bikes once again, with a choice of lightweight Addict or aero Foil. The blue and white paint job makes them one of the best looking bikes in the peloton, but they also come in pink... 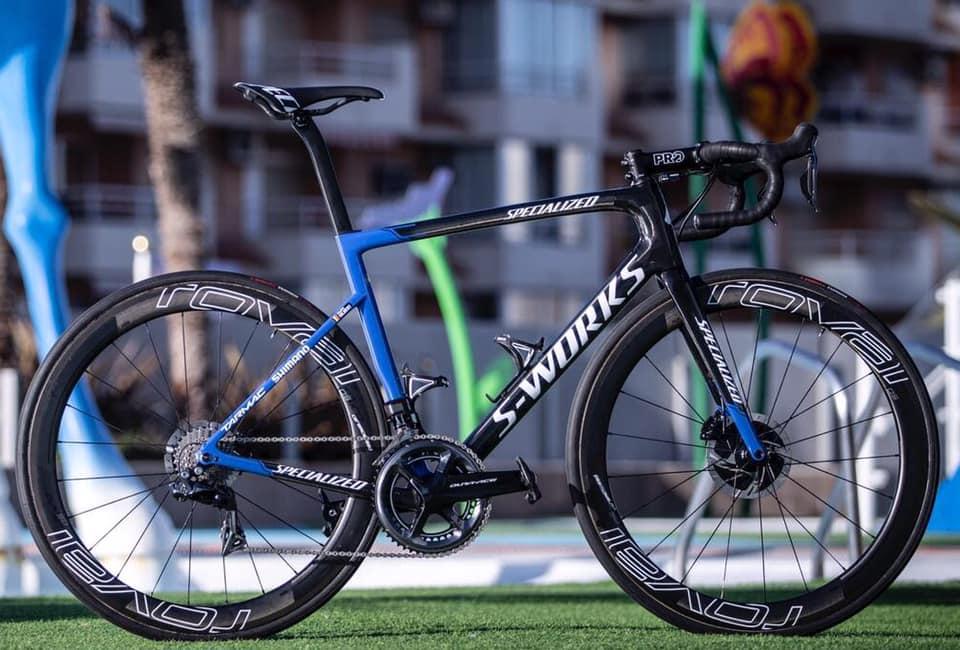 Other than a new headline sponsor that we had to Google (Deceuninck is a Belgian window company) the hugely victorious Quick-Step squad will continue to ride Specialized bikes. It’s got the Tarmac SL6 and Venge to choose from for most road races, and the Roubaix for cobbled classics.

The team has also fully committed to disc brakes for 2019 and every one of its many victories this year, including Paris-Roubaix, has been on disc brakes. The Dogma F12 is the successor to the Dogma F10 is claimed to reduce drag by 7.3%, equating to an 8 watt saving at 40kph (25mph) and has been designed from the outset with disc brakes, alongside a regular rim brake version, thus keeping both camps happy. We're unlikely to see the team using disc brakes anytime soon though. With Giant replacing BMC at the new CCC Team, Sunweb has gained the services of Cervelo. So outgoes the TCR Advanced and Propel and in comes the R5 (above) and S5 Disc (below), the later an aero bike designed entirely around disc brakes. We expect the team to stick with Shimano groupsets but we’re not sure what wheels and finishing kit the team will use yet. 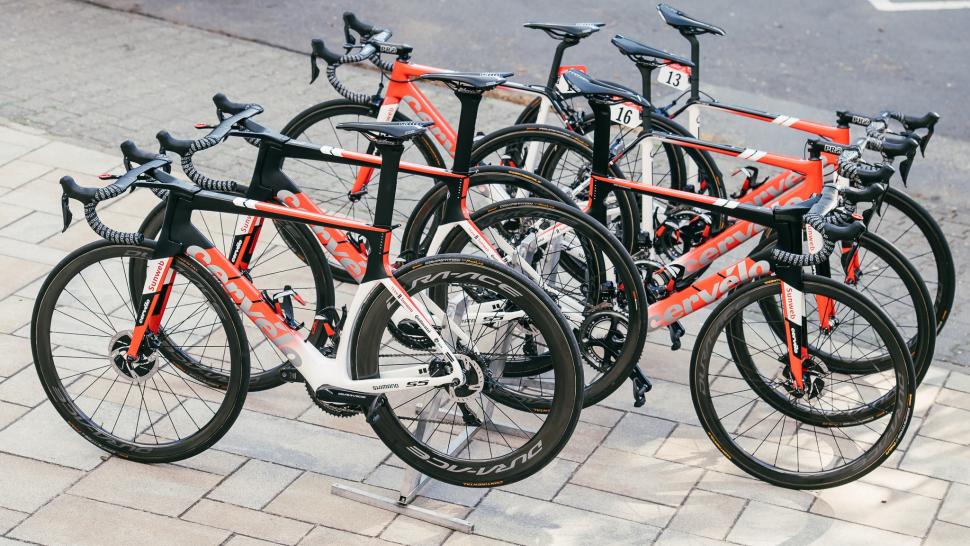 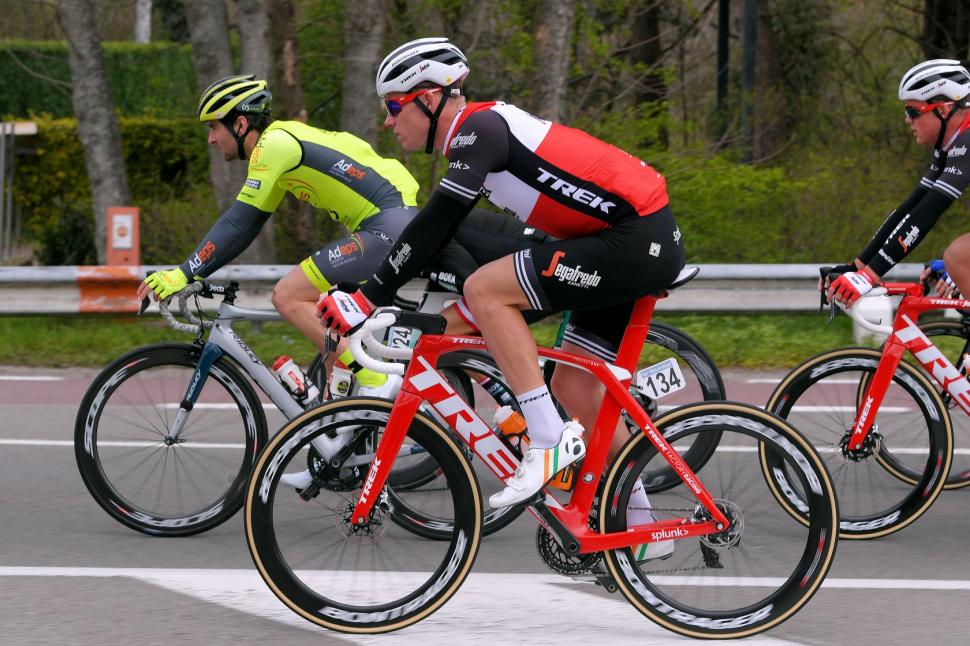 The biggest change for the Trek team is that Shimano is out and SRAM is in. SRAM used to be a bigger force in the pro peloton when it launched its original Red groupset, but for the last few years has only sponsored one team - Katusha. 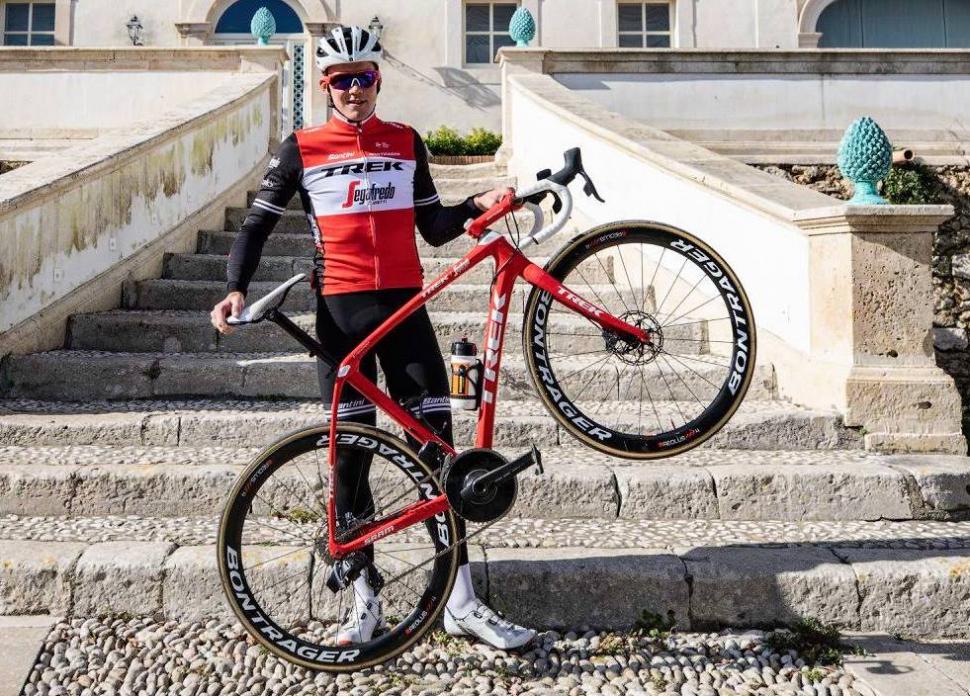 The team will have the choice of the Madone for sprinting and breakaways, the Emonda for mountain stages and the Domane for cobbled classics. Aside from the Domane, these bikes are all available with rim or disc brakes, and so far this season we've seen a bit of a split.

Bikes are equipped with SRAM's shiny new Red eTap AXS 12-speed groupset and a couple of riders have been experimenting with 1x12, with mixed results it is fair to say. Colnago rejoined the pro peloton last year with the UAE Team Emirates team, and there’s no change this season. The team will have the new C64 launched last year to race on as well as the Concept and V2-r (below) aero bikes for the sprinters and fast finishers. 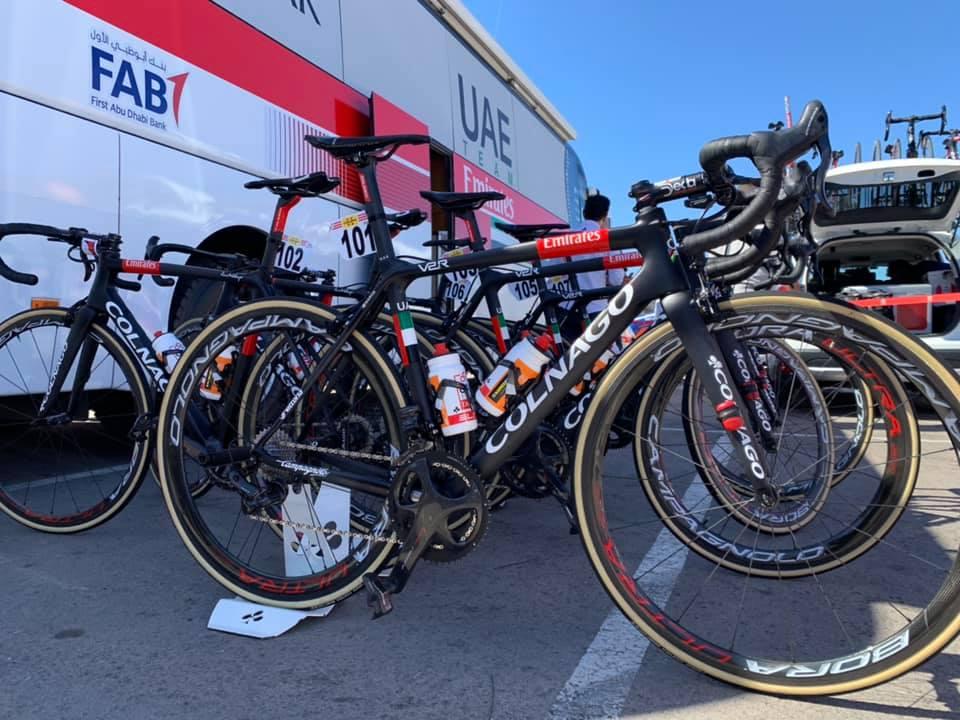 We'll update this guide as we get more pictures and details on the new bikes in the coming weeks.