Can Peter Sagan make it a consecutive victory at Paris-Roubaix this Sunday? However he does, this is the bike he’ll be riding, the brand new Specialized Roubaix introduced a few days before the race with Future Shock 2.0 and a special paint job and some custom tweaks for the defending champion. Peter Sagan won the 2018 Paris-Roubaix aboard the previous generation Roubaix with an early development of the new Future Shock 2.0, which introduces rebound and compression hydraulic damping and on-the-fly adjustment from open to firm. He, and the rest of the Specialized atheletes, have been riding the production bike since late last year and will race it for the first time this weekend. The biggest change from the production bikes is the use of a different Future Shock 2.0 dial (pictured above on a Quick Step bike). On the stock Roubaix bikes it’s a plastic dial with a slight knurled edge. The pros have an aluminium cap with four distant tabs and four rather than one retaining grub screws. Presumably this is to make it easier to turn the dial in the heat of a race. It’ll be interesting if this becomes available as an option or stock on the new Roubaix. We can envisage a little aftermarket supply of 3D printed dials to replace the Specialized design. Spearheading the Roubaix range is a Sagan Collection bike which offers a limited edition paint job for an extra £500 over the regular S-Works bike, bringing the total price to a cool £10,000. It’s a lovely paint finish and sparkles in the sunshine. Apparently it was inspired by the two sides of the world champions personality and references to his world champion success. The pictured bike is equipped with a Shimano Dura-Ace Di2 groupset, but we’ve heard a rumour he’ll actually ride Dura-Ace mechanical. Why? Because we’re led to believe he prefers shifting with the mechanical levers on the cobbles, which we can believe because as I found out at the other day, changing gear with Di2 on the cobbles is very tricky. We’ll have to wait until Sunday morning to see which groups he actually goes with.

For this reason of tricky gear changes, and because riding in the tops is often the best way to ride the cobbles, some of the team opt for small satellite shifter buttons mounted to the bars just to the side of the stem. This is Zdenek Stybar’s bike with optional shifter buttons. The only other change he and the rest of the peloton make for the race is to swap the 39t inner chainring for a 44t. This is due to the course being very flat and the 39t is too big a jump from the 53t for those occasions when they need to resort to the small ring. You might think the pros just stick it in the big ring from the start to finish but there are sectors and times where the smaller chainring might be useful.

Specialized is in the power meter business now and the Dura-Ace crankset is fitted with the company’s new dual-sided power meter. 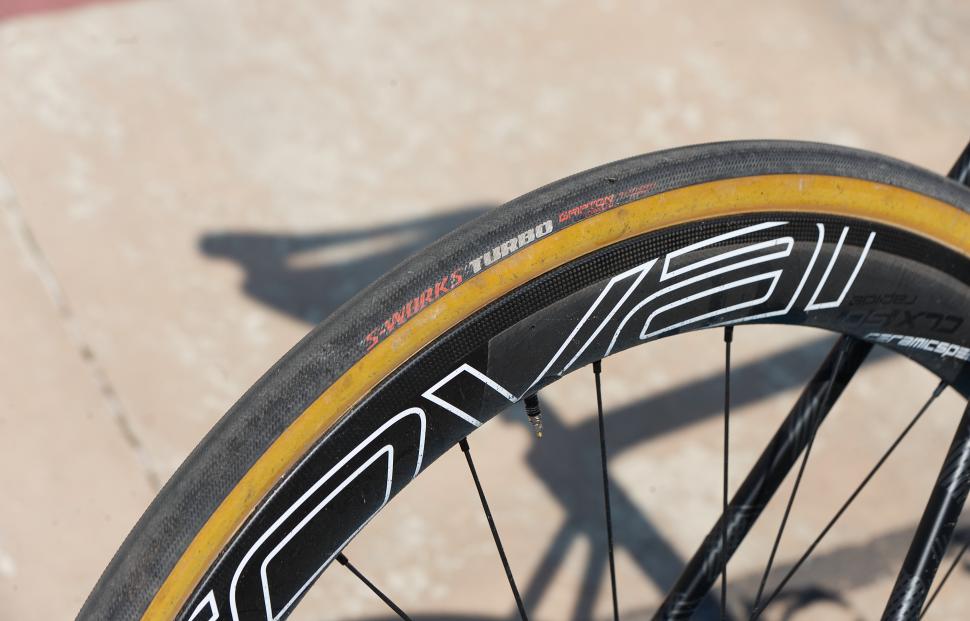 The team will all use the Roval CLX50 carbon fibre whilst with CeramicSpeed bearings in the hubs and fitted with Specialized S-Works Turbo Hell of the North tubular tyres, 28 or 30mm wide depending on rider preference. There’s no sign of the team making the transition to tubeless yet but we’ve heard rumours that Stybar has been testing them outside of races with apparently positive results. One noticeable difference from the stock bikes and even the other team bikes is in his choice of stem. It’s the new Venge stem but looks odd because the plastic cover that slips onto the backside has been removed owing to the Future Shock dial. Why? Because he wants a 140mm stem (yes, really) and the new Future stem developed for the Roubaix maxes out at 130mm. The rest of the team are using sponsored PRO stems but we know Sagan is fussy about stems (he’s previously used Zipp Sprint SL stems with the logo taped over) so we’ll presume he likes the stiffness of the new Venge stem. A key part of the new Roubaix launch was the addition of three pro fit geometry bikes that will be available to purchase as frame sets (but not until September in the UK). These three frame sizes exactly mirror the stack and reach of the Tarmac and Venge bikes, ensuring the pros can get their desired aggressive and slammed fit that they prefer for racing. Sagan rides a 57cm which equates to a 56cm Venge/Tarmac. Other details include a Specialized Romnin Evo saddle and aluminium handlebar, Supacaz bar tape and Tacx bottle cages. Why an aluminium bar and not carbon? Because in a crash aluminium is less likely to snap.