Flectr have already smashed their crowdfunding target on Kickstarter for their latest innovation, which they claim is more visible than pedal reflectors
by Jack Sexty

There are already a myriad of options out there if you want yourself and your bike to be lit up like a Christmas tree; and now Flectr have added another option to the list with the launch of Flectr Vortex, the world's first crank reflector.

Flectr already sell rim, helmet and wheel reflectors (the latter was reviewed by Shaun Audane last summer) and the Vortex crank strips have just launched via a crowdfunding campaign on Kickstarter. Weighing just 2.2g for a set, they simply wrap around your cranks with a strong adhesive. Flectr say they offer an advantage over pedal reflectors that only work in two directions, because they offer 360° of visibility. The brightness is courtesy of a high-grade cube corner prismatic retro-reflector, and the custom adhesive can also be removed without any residues left on your cranks. 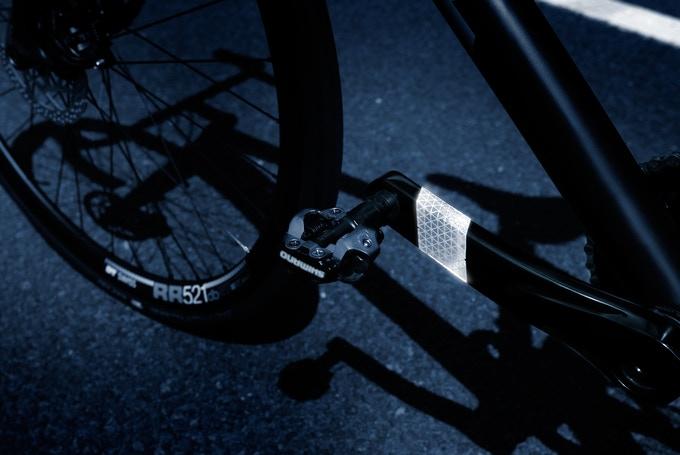 To reserve a pair requires a €12 Kickstarter backing. €19 gets you two sets, and for €65 you can get a 'community pack' of ten sets. Flectr have already raised almost double their £3,090 goal, and the estimated delivery for orders is June.

Interestingly, the law officially states that cyclists in the UK must have four pedal reflectors when riding in the dark (read up on the latest legal requirements at Cycling UK here); so Flectr Vortex practically makes up for the lack of them when riding in clipless pedals. We're unsure if they would be legally accepted as a replacement for pedal reflectors, but we've reached out to Cycling UK and Flectr for clarification.

*Updates*
Flectr told us: "We do not recommend Flectr Vortex as a replacement for existing pedal reflectors, but rather to all those cyclists who - due to the design of clipless pedals - do not have reflectors on the pedals." They also said that compared to DIY versions, their reflective materials "cannot be bought publicly, because common reflective tapes do not meet the necessary requirements for reflectance in combination with the necessary formability and a really reliable adhesive".

On the question of pedal reflector replacement, Cycling UK said: "The short response is “no”. Highway Code Rule 60 is clear that for bikes manufactured after 01/10/85 they must have amber pedal reflectors to be road legal. As crank reflectors, being neither amber nor on the pedals, while they do seem a sensible solution to the problem posed by clipless pedals and judging by the video should help cyclists using them be seen, they would not be legal in the eyes of the law."