Gravel is getting serious
by David Arthur @davearthur
1

Mavic signalled its intent to steal a bit of the growing gravel and adventure market with the launch of its Ksyrium Pro Disc All Road wheels back in 2015, for rides that start on the road and finish on dirt and cobbles, and this week it has launched a new range of wheels and tyres along with a line of clothing that aims to increase its appeal.

The gravel and adventure, or whatever you want to call it, category is proving popular with cyclists that are either bored of riding on the road and want road bikes that can allow them to explore off-road trails in the woods and on the plains, or people that just want to mix up road rides with a bit of exploration and discovery. 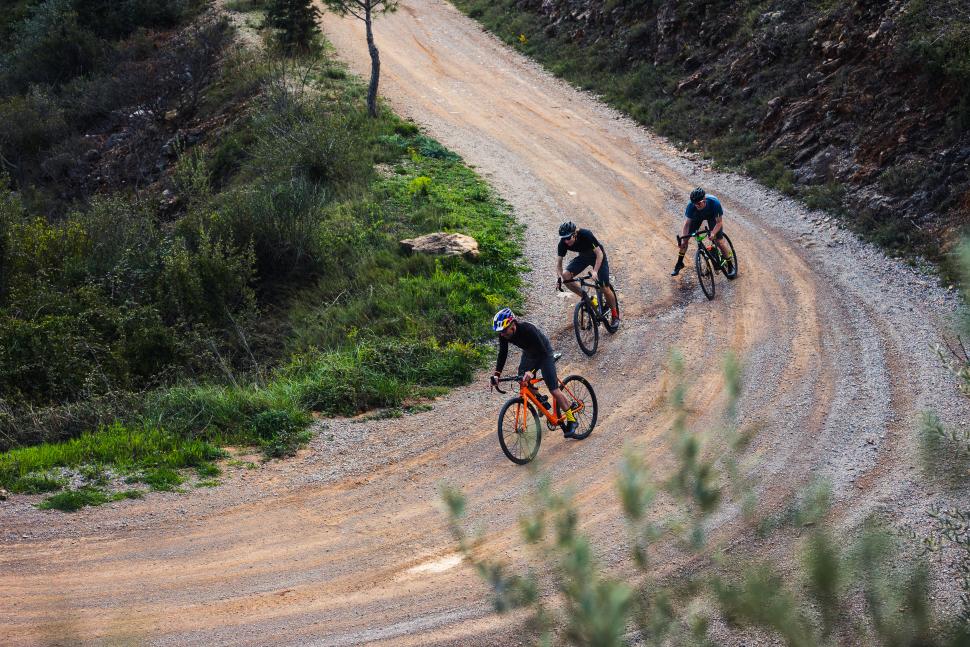 There has been a slew of new bikes launched in the past year with ever-increasing capability, and Mavic is hoping its new range of wheels will be a popular choice for anyone building such a bike, bringing together all its experience into a wheel and tyre combination that is fit for purpose.

Revamped wheel range and 650b option

The Allroad Pro UST wheelset (£859) is the big daddy, the top-of-the-range wheelset in a four-model lineup which now includes a 650b option for the first time.

We reviewed the original Ksyrium Pro Disc Allroad back in 2016 and found them to be excellent wheels for disc-equipped bikes that get used on and off-road, but they’ve now been updated. 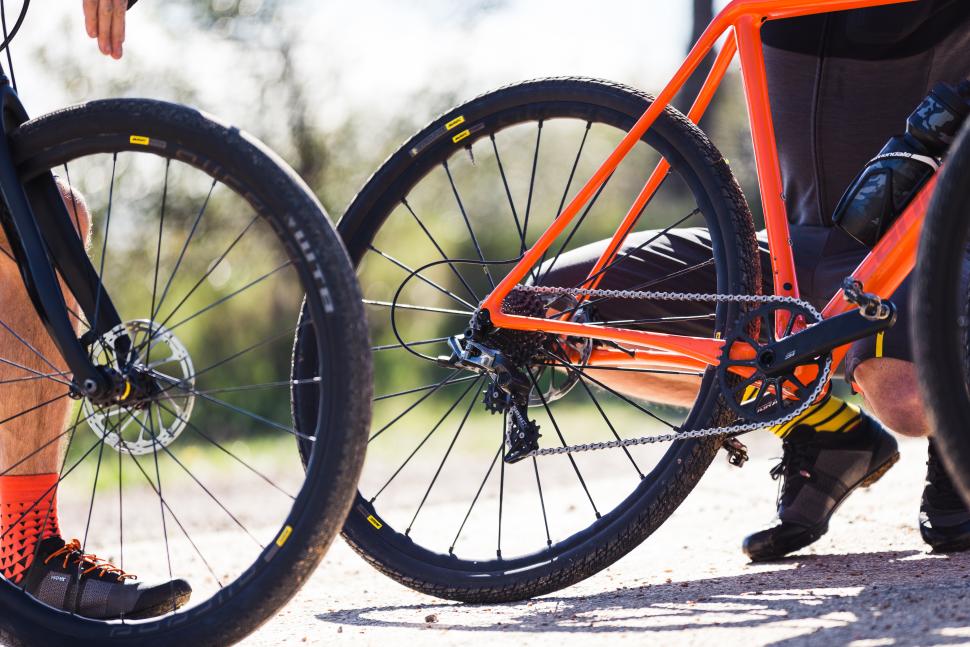 There’s familiar technology at play here but the key difference is a wider rim, it’s now 22mm internally compared to 19mm before. That’s a change intended to work better with wider tyres, with Mavic offering a choice of 30, 35 and 40mm tyres, but the rims will take up to a 45mm if you want to go even wider.

The rims are still made from aluminium with excess material removed between the spokes to save weight and drilled spoke holes for the oversized nipples to thread directly into, with large aluminium spokes and hubs. The hubs are disc-only, with 6-bolt and centre lock both supported, though the former will eventually be phased out. The freehub can be compatible with Shimano and SRAM XD cassettes. 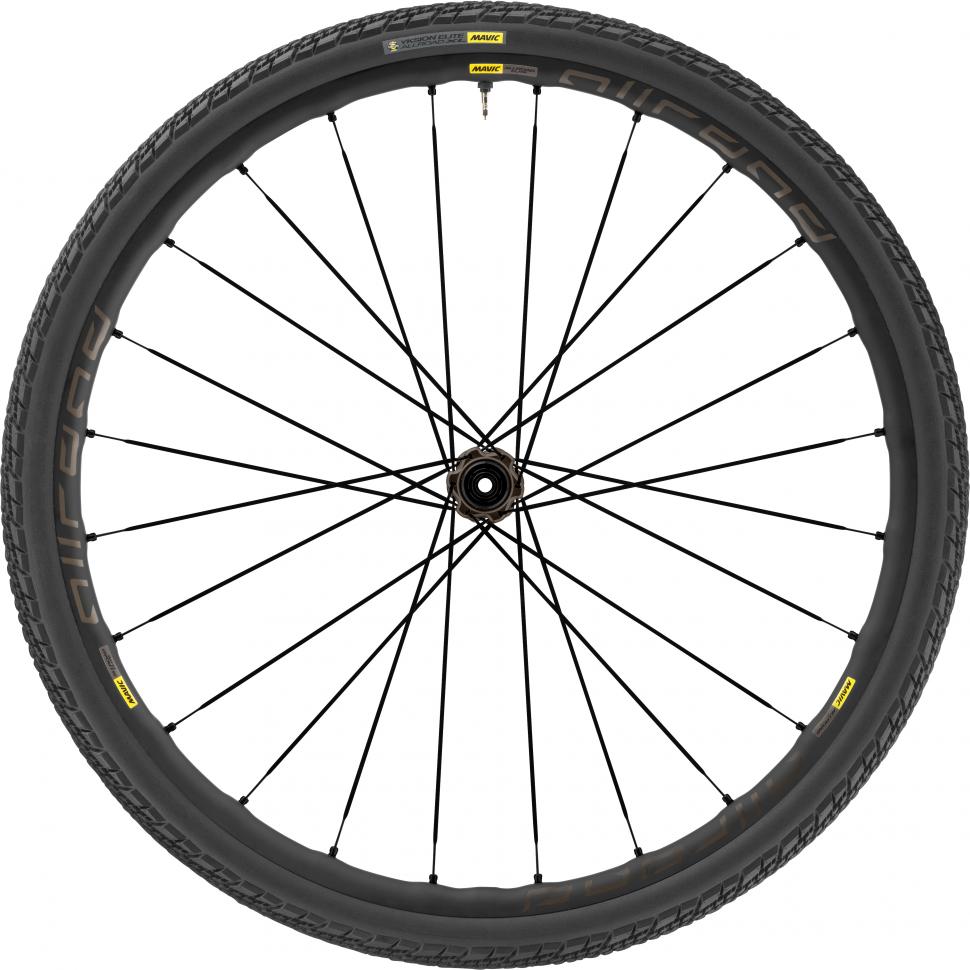 The Allroad Pro UST wheelset weighs a claimed 1,660g without tyres and costs £895 with tyres, and the price includes all the necessary components and sealant for going tubeless.

The new Allroad Elite UST Disc wheelset (£659) uses the same rim as the Pro wheelset, with the same tyre options, but to keep the price down the hubs are different and steel spokes replace aluminium spokes, with the weight increasing 30g to 1,690g. The hubs retain the same disc and axle compatibility as the more expensive ones on the Pro wheels.

Brand new in the range is the Allroad Elite Road+ 650b wheelset (£629 excluding tyres) which joins the small list of currently available 650b wheels. As you might know, there’s a growing trend for road plus and adventure bikes being compatible with the smaller wheel size because of the benefits the much larger tyre size allows, namely comfort and grip. The wheels will be available July.

Mavic hasn’t developed its own 650b tyre (yet) so you’ll have to look at something like the WTB Horizon or Compass Switchback Hill if you want to go small and fat.

Propping up the new range is the Allroad UST (£225 excluding tyres) that is an entry-level wheel with a UST aluminium rim with a 22mm internal width, and flat bladed spokes replaced by traditional round steel spokes. The hubs are fully compatible with the many different axle standards currently being used.

Naturally, the rims are tubeless compatible using the UST standard, and Mavic supplies the wheelset with a choice of 30 or 40mm tyres. 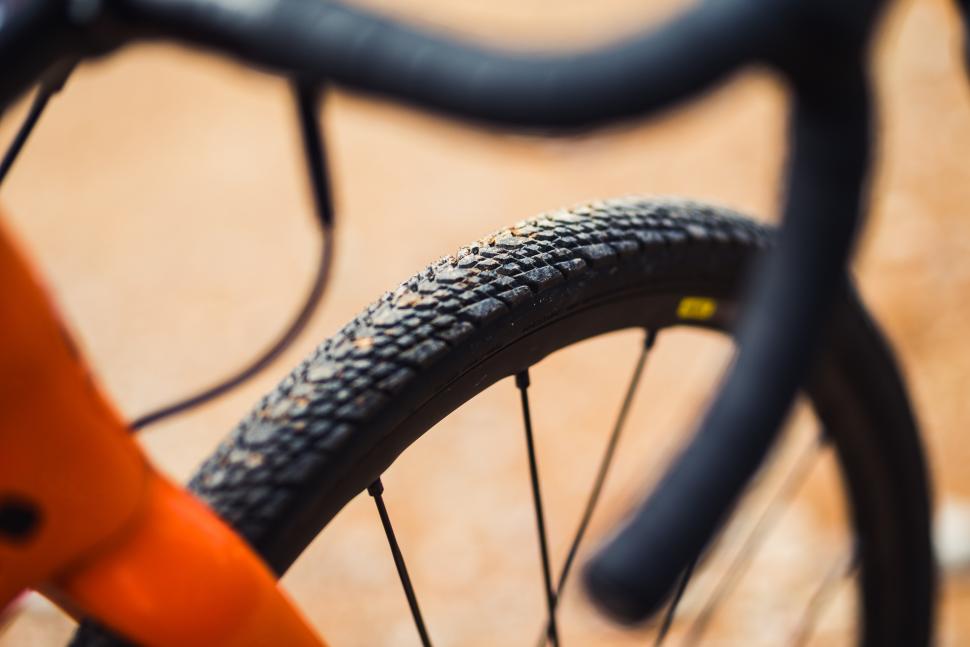 The Yksion Allroad XL is a new 40mm tyre with a chevron directional tread pattern that looks to focus on optimum rolling resistance performance on harder surfaces rather than outright traction in the gloop. The front tyre looks like it’s on the wrong way around but this is intentional, Mavic claims it provides better water dispersal while the rear tyre chevrons point forwards.

The Yksion Allroad Elite was previously only available in 30mm width but is now joined by a 35mm option. Compared to the Allroad XL the tread pattern is clearly aimed at road speed over off-road grip.

Gravel-specific clothing is becoming a hot new category, we’ve seen Sportful’s Giara clothing already and other brands are getting in on the action. Mavic’s new Allroad range comprises a jersey, insulated gilet, long sleeve jersey and fitted baggy shorts, and all share an understated design that is as far from the loud and proud designs of most pro racing inspired clothing. 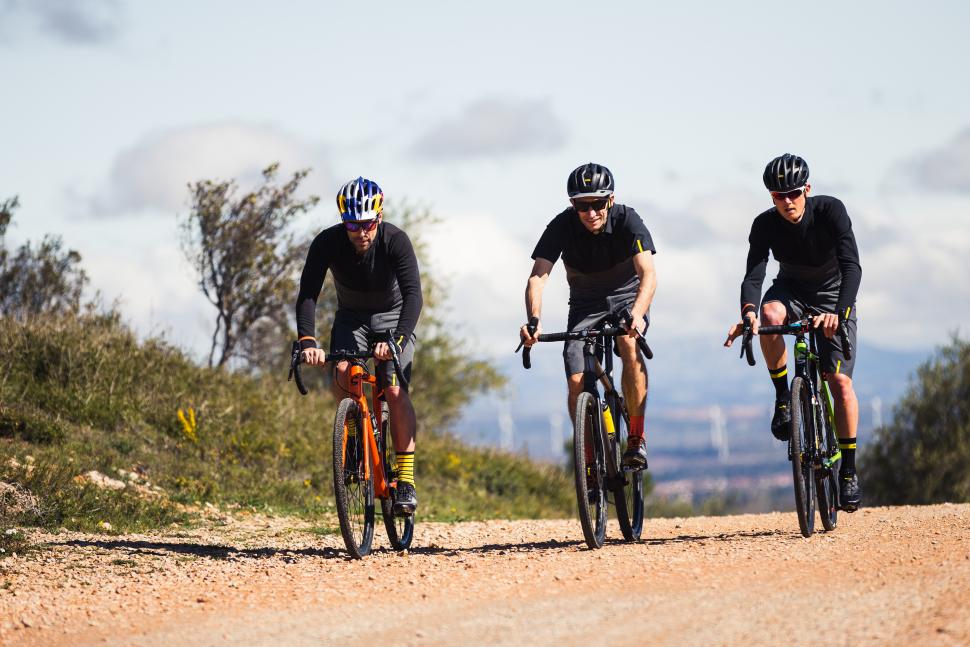 The Allroad Insulated Vest (£140) looks a really versatile top, insulated and highly packable with a reversible design so you can choose a bright orange for lower light conditions.

A merino-based material is used in the Allroad jersey (£130) with a regular fit being more relaxed than a race jersey, with raglan sleeves, a classic shirt-style collar and a chest pocket. 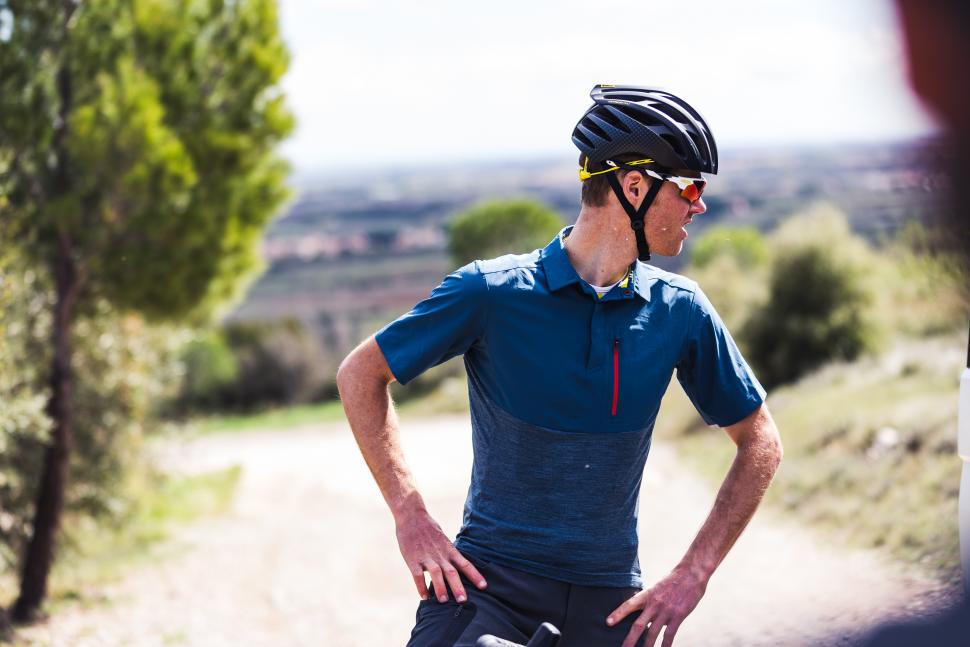 I tested Sportful’s Giara baggy shorts and found them ideal for those rides when you might want a more relaxed look, and these Allroad Fitted Baggy Shorts (£105) appear to take a similar approach with a fitted overshort design. The inseam length is adjustable and the pre-shaped and stretchy durable woven fabric is intended to provide a full range of movement with no restriction.

Shoes aren’t immune to a bit of gravelisation, and Mavic’s Allroad Pro (£225) shoes combine a mountain bike SPD cleat-style sole with a soft and comfortable upper, with the all-important understated looks. 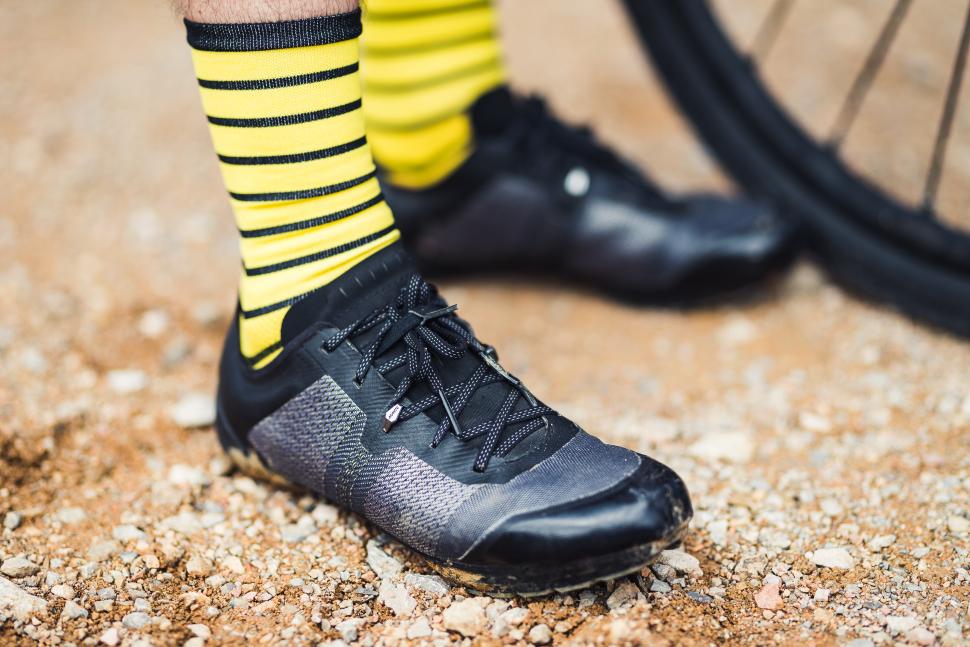 Mavic has used a Matryx technology for the upper which it claims offers “incredible durability, support and comfort in a super light and efficient package”. There’s Kevlar weaved into the upper for added support and reflective yarns for extra visibility.

Giro popularised laces a few years back and Mavic has decided laces are best for a gravel shoe. Lace elastic keeps the laces tidy and out of the chain, and an ‘Autolocker’ offers dual adjustability between the top and bottom laces. The sole is made from Energy Carbon Comp Allroad with an Index Energy Transfer of 80, whatever that means. The sole has a tread designed to allow easier walking with anti-slip traction. They won’t be available until September 2018.

We'll hopefully get some of this new product in for review soon. In the meantime check out www.mavic.com for more info.