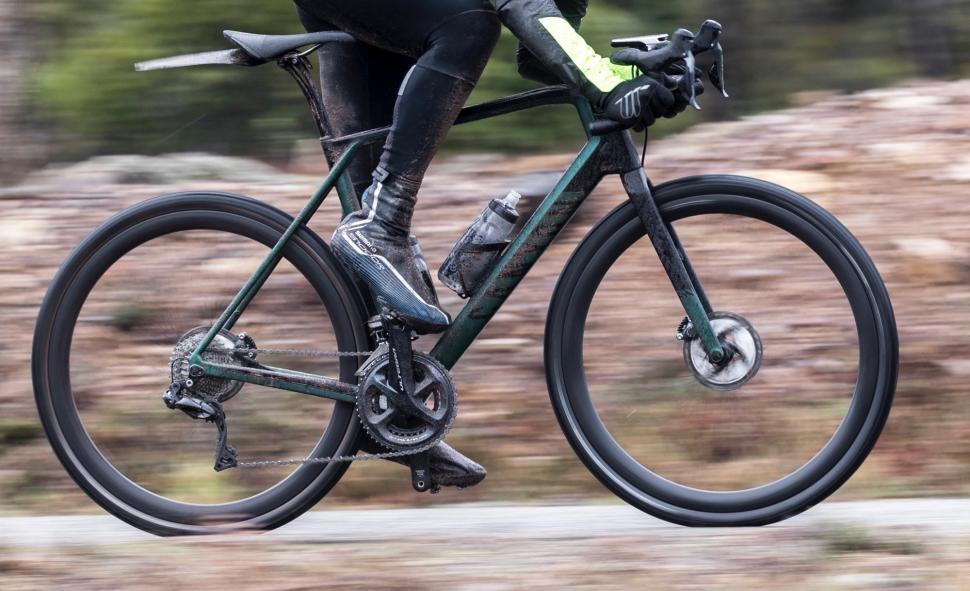 There are two carbon-fibre versions of the Grail frame in several different builds (details down below), with an alloy option coming later.

First, let’s take a look at what Canyon is calling its Hover System – the means of providing comfort over rough roads, gravel, dirt tracks… It comprises three elements:

Let’s go through them. 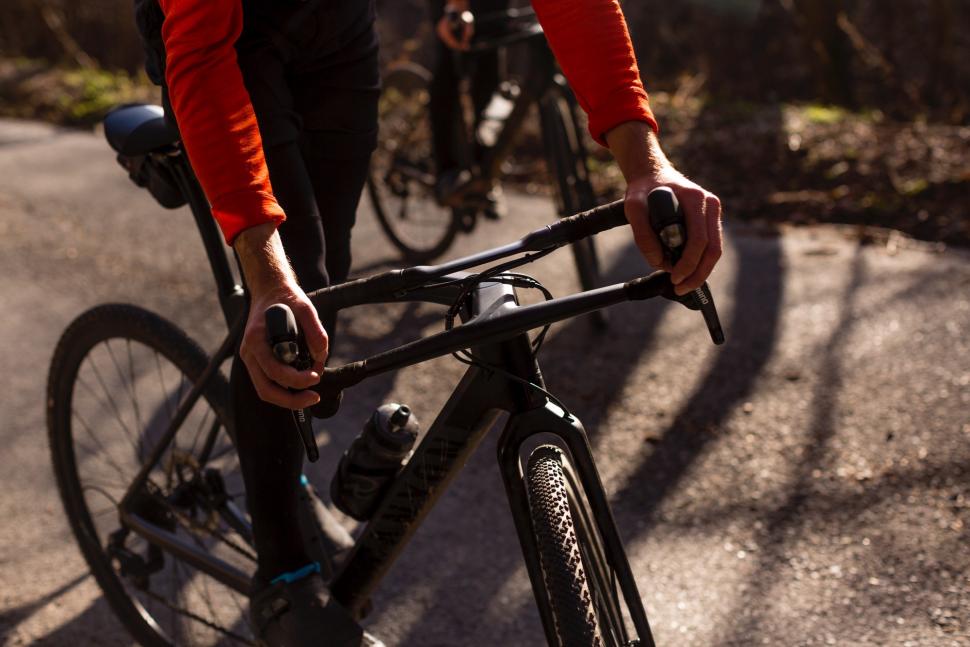 The Hover Bar is bound to provoke strong reactions. Hell, people get irate when Snapchat is redesigned so some are going to be apoplectic with the design of this double-decker handlebar/stem. Here’s the rationale… 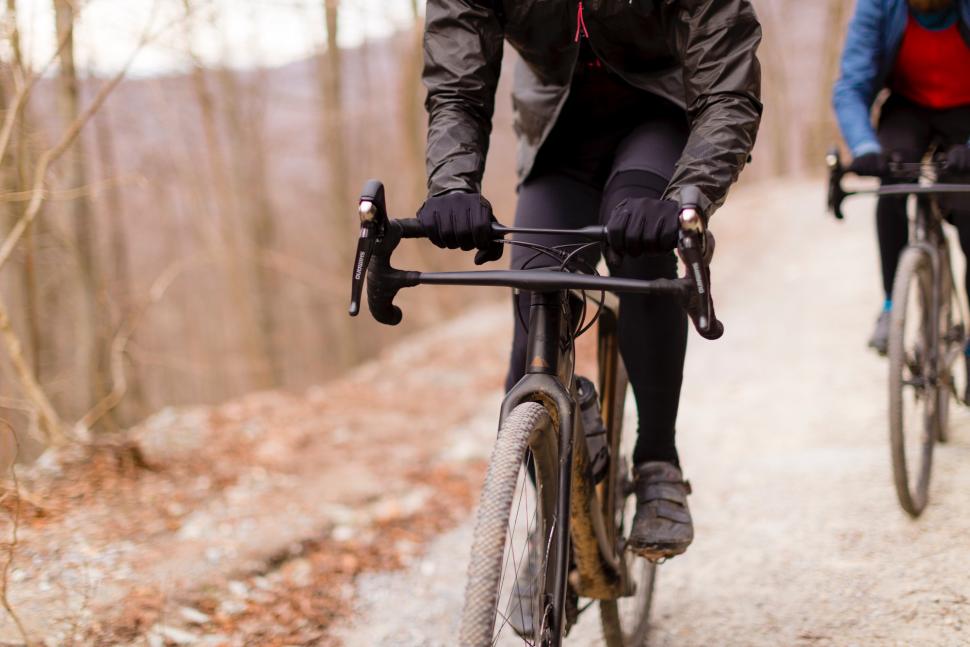 “The top section, where you want to put your hands while cruising, is the least compliant part of a conventional system,” says Canyon product engineer Daniel Heyder, who worked on the Grail. “If I’m going down to the drops I want a stiff cockpit, I want to have good control, and that’s not existent on a conventional system. We’ve turned this whole thing around and made the Hover Bar compliant on the tops and stiff on the drops.”

Canyon has done this by moving the location of the stem relative to the tops of the handlebar. Or, you can think of it another way: Canyon has added a top deck to the handlebar that's not connected directly to the stem. It might take a second to get your head around what’s actually going on here (the pictures explain it better than any written description). It’s the lower deck that connects to the stem, while the top section is specifically engineered to be compliant. 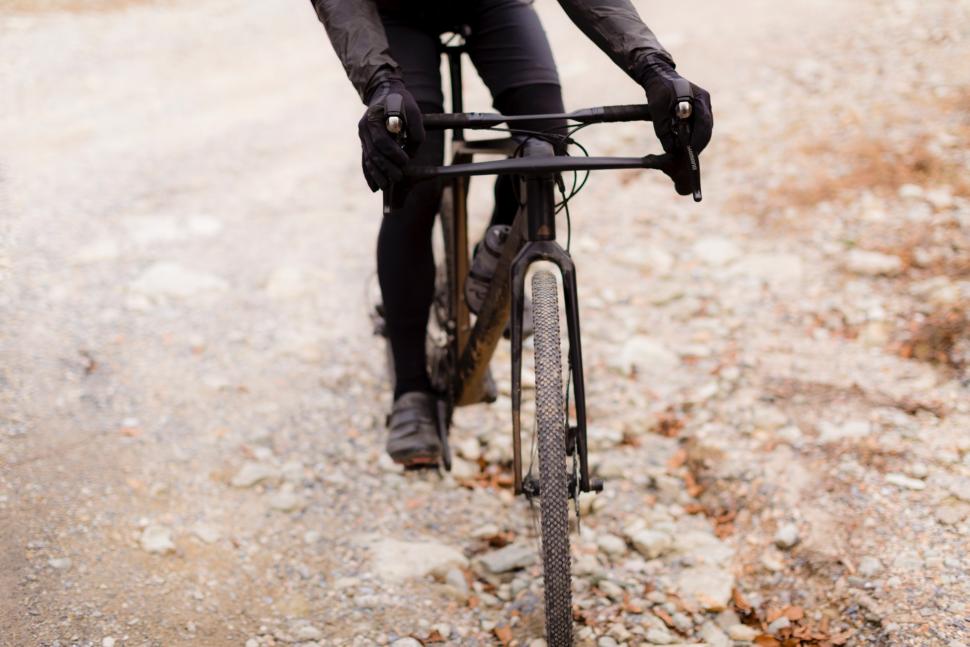 “This Flex Area exploits carbon’s elastic properties to gently deflect and absorb chatter and vibrations being transmitted through to the rider’s body,” says Canyon.

Of course, every new innovation in cycling needs a statistic; that's the world we live in! Canyon says that the top section of the Hover Bar offers seven times more vertical deflection than the brand’s H31 Ergocockpit. The top deck is oval in cross section except for a far flatter strip in the centre. A big sticker warns you not to put heavy loads here but you needn’t worry that it’s not strong enough to take your weight when cycling. Canyon says it has been tested way beyond the levels required for standard handlebars.

Canyon also says that the Hover Bar is just 120g heavier than a conventional handlebar and stem setup (more on weight in a bit) so it’s much lighter than a full-on suspension system, and there’s obviously no need for additional maintenance.

I did get the chance to take the Canyon Grail for a First Ride, so find out what I thought of the Hover System in action here.

The Grail – so-called because Canyon reckons it has been successful in its quest for speed and comfort, stability and agility – uses existing technology in its VCLS 2.0 seatpost.

If you’ve not come across this design before, the seatpost is actually made from two separate D-shaped sections that sit alongside one another and are joined only at the clamp. It’s a leaf spring system that provides comfort while allowing the saddle tilt to remain constant. 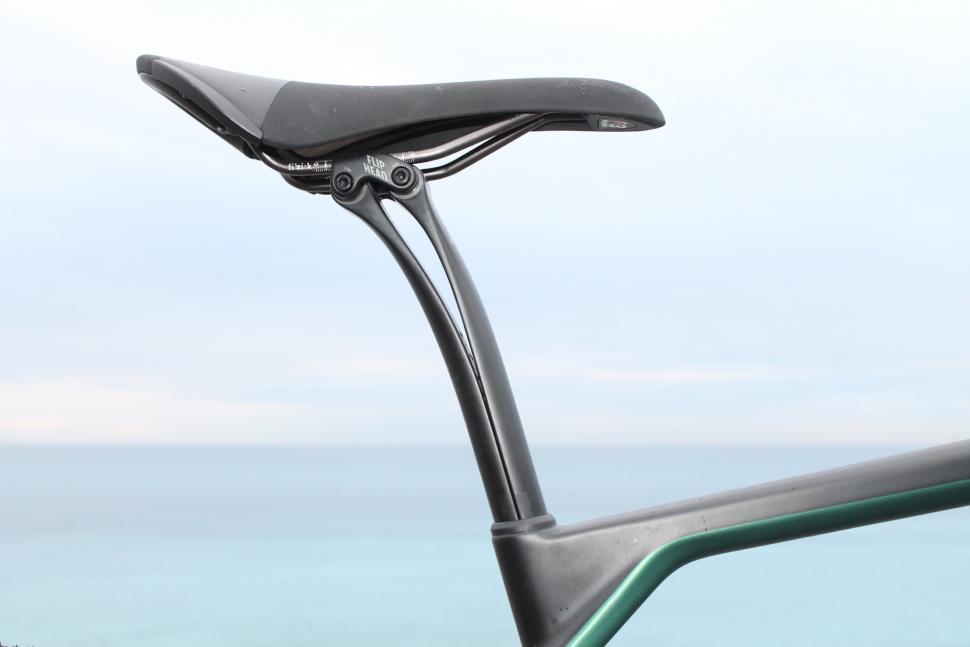 The clamping point isn’t at the top of the seat tube, it’s positioned well down in the frame to increase the effective bending length of the VCLS 2.0 seatpost. Canyon reckons that this means you can get (stat alert!) 15% more vertical deflection than you’d otherwise have.

“The simple synthetic insert and set screw construction [of the clamping system] is not only 15g lighter than conventional clamps, it also offers a far more secure hold and is less prone to water and dirt infiltration thanks to the upper rubber seal,” says Canyon.

The wheels and tyres are always central to determining a bike’s comfort and all Canyon Grails have rims with a minimum 22mm internal width and 40mm-wide Schwalbe G-One Bites (there’s clearance for 42mm tyres). Both the front and rear wheels are held in place by 12mm thru axles. 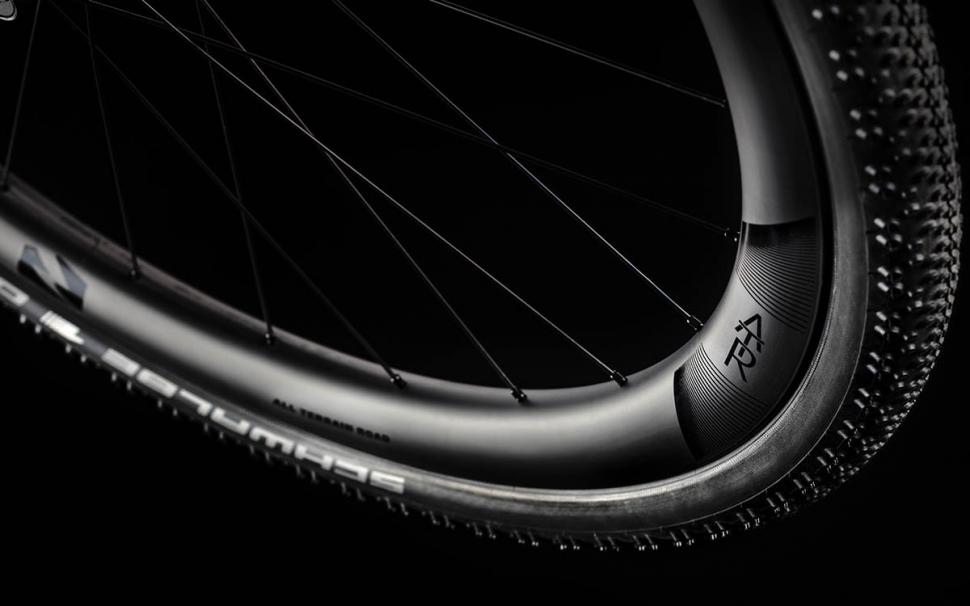 Both the rims and the tyres are tubeless so you can run lower pressures to provide extra comfort without running the risk of pinch flats.

“G-One Bite tyres specced across the range were developed by Schwalbe with direct feedback from Canyon testers and raise the bar in combining high levels of traction and low rolling resistance without compromising the suppleness desired when tackling new terrain,” says Canyon.

“Geometry is the soul of the bike,” says Canyon's Daniel Heyer, and we couldn’t agree more.

You can have all the clever features you like, if the geometry isn’t right you can forget it. Now, we talk on about stack (the vertical distance from the centre of the bottom bracket to the top of the head tube) and reach (the horizontal distance between those two points) a lot here on road.cc because those figures are vital to understanding a bike design. However, those measurements don’t really work with the Grail because your ride position is affected by the Hover Bar where the top deck is about 65mm higher than the bottom deck. Measuring to the top of the head tube doesn’t tell you a lot in this case. 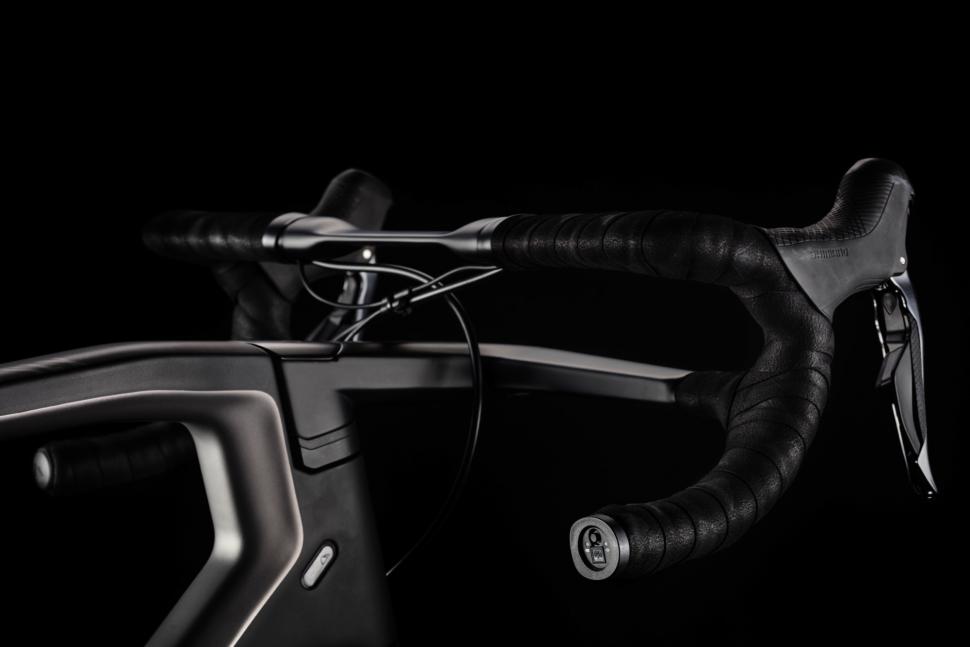 If you divide the Stack+ measurement by the Reach+ measurement, the figure you get is fairly close to that of Canyon’s Sport geometry which features across its Endurace endurance road bike range. The front end of the Grail is actually about 10mm lower for a given size “creating an active riding position that’s still comfortable when racking up big miles over rough surfaces”, according to Canyon.

You do get some height adjustment on the Hover Bar, although it is limited to 15mm. If you want to drop the bar down, the top cap stays in the same place to maintain the continuous line from the top tube.

Getting the geometry right is difficult on a bike that could be ridden on everything from tarmac to singletrack. Different terrains and surfaces have different demands.

Canyon has given the Grail a long wheelbase to provide plenty of stability so that the bike can hold its line over rough ground, to create enough clearance for wider tyres and to eliminate the risk of toe overlap. The medium sized model, for example, has a 1,029mm wheelbase – about 40mm longer than you get on the Endurace endurance road bike. 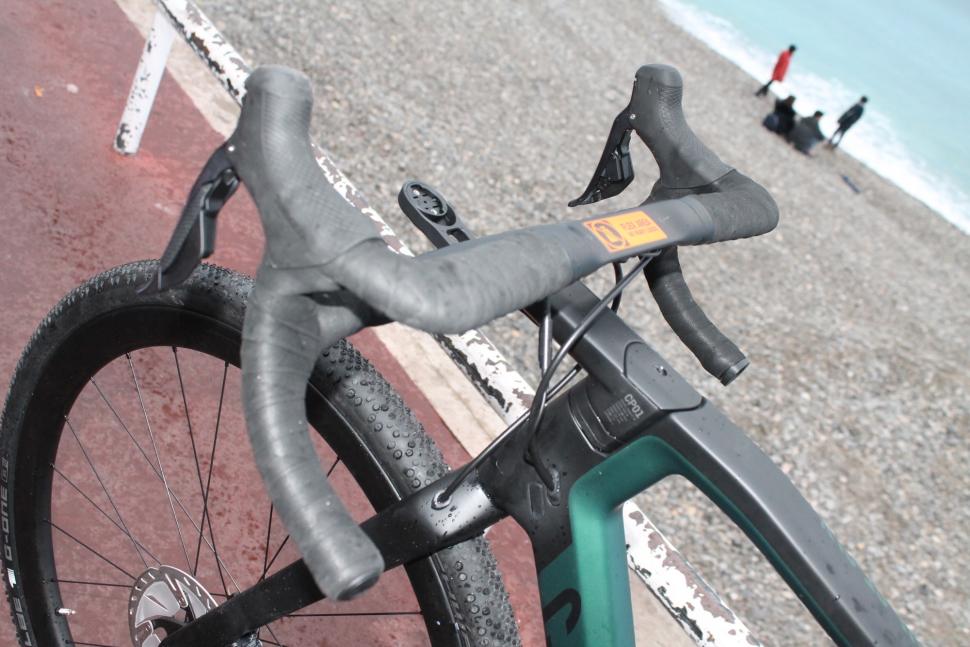 All other things being equal, a wheelbase of that length would mean a compromise in agility, so Canyon specs short stem lengths to counteract that effect. Although the stem section of the Hover Bar looks long, the distance that the top of the bar sits ahead of the steering axis is short – 75mm on the medium sized model.

The Grail is available in seven different sizes, the five larger ones coming with 700C wheels and the two smaller ones fitted with 650B. Canyon reckons that this allows it to create a uniform fit, performance and ride character across the range.

Canyon reckons that this makes the Grail CF SLX the lightest gravel frame out there. We know that the Open Upper and the Parlee Chebacco are both around 870g, and we certainly don’t know of anything lighter. All versions of the Grail have mudguard mounts and the alloy version, which will be in Canyon’s 2019 range, has rack eyelets too. The carbon-fibre versions of the frame, on the other hand, don’t have rack eyelets. Rather, Canyon is expecting you to use frame bags if you head off on an adventure. 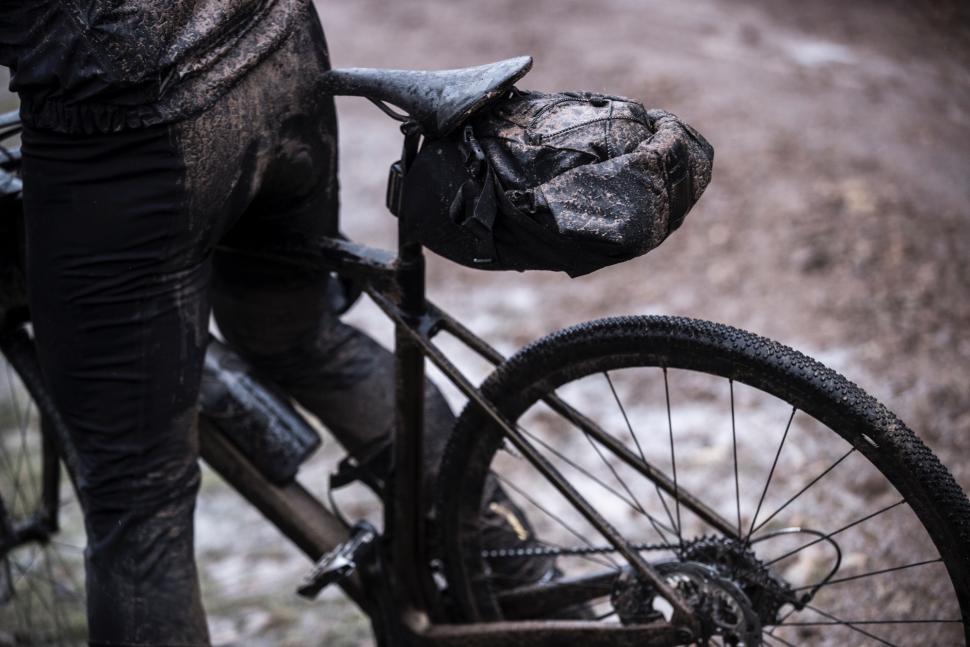 To this end, it has worked with Topeak to develop a set of bags for the Grail. The bike comes with a set of 3M protective foils that you stick in place to prevent the straps causing wear.

All of the Grail models are built up with Shimano groupsets – 105, Ultegra mechanical and Ultegra Di2 – so they all have double chainsets. Interestingly, Canyon hasn’t gone down the 1x (single chainring) route here.

“Sticking with a two-by (double chainset) system delivers the range riders need to tackle a variety of terrains without having to work around large jumps between gears,” says Canyon.

It’s an interesting decision, but let’s not do the whole 1x debate here!

There’s one women’s-specific model, and that’s the Grail CF SL 7.0 Wmn. This one is available in sizes 2XS to M whereas all the other models go up to 2XL.

Here are the prices:

Read about our first ride on the Canyon Grail here.