Factor Bikes have today unveiled an updated version of its One aero race bike, which aims to be the fastest aero bike ever according to the company. The new bike will be available with rim or disc brakes, has clearance for up to 28mm tyres, extra frame stiffness and a switch to a BBRight bottom bracket.

The One traces its DNA back to the Vis Vires I tested back in 2014 and retains the Twin Vane Evo split downtube and external steerer fork design. It’s one of the most distinctive high-end race bikes we've ever seen and tested here at road.cc. You’d think it would contravene the UCI’s tough rules and regulations, but the new bike is on the organisation's list of approved bikes. It’s highly likely the company’s sponsorship of pro cycling team AG2R, which continues this season, has helped the company to develop the new bike. That and the company owning its own factory which it reckons gives it an edge when it comes to designing and manufacturing new bikes.

“The new Factor ONE goes beyond aerodynamics to be the fastest aero road bike ever, not on paper or in the wind tunnel, but on the road,” explains the company.

The AG2R team has favoured the O2 bike in its first season, since switching from Focus Bikes the year before, but expect to see the new One being used on stages and in races where aerodynamics matter. 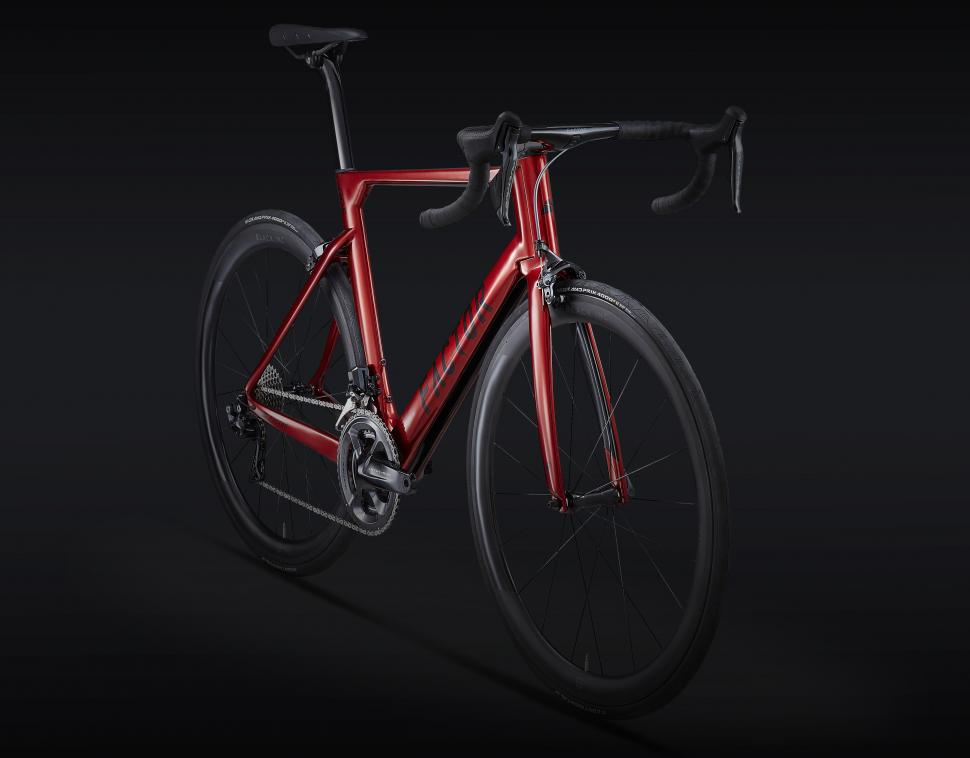 As with most new race bikes being launched this year, the new One is available with either rim or disc brakes. In the case of the former, the company is using direct mount brakes, which provide wider tyre clearance. The One Disc uses the now standard 12mm thru-axle and flat mount combination, with all hoses internally routed.

The disc version of the One sees the front brake hose entirely internally routed from the caliper to the brake lever. We’re starting to see more brands take to concealing hydraulic brake lines, such as BMC and Colnago. In a further nod to aerodynamics, the flat mount brake caliper sits in a recess in the back of the fork leg. The new One owes its development to the SLiCK, the time trial and triathlon bike which has also been updated (more on that later) and retains the geometry of the O2. The company says it has refined the Twin Vane Evo downtube to improve aerodynamics even further, whilst increasing the frame stiffness. It's all thanks to extensive use of computational fluid dynamics computer software and wind tunnel testing to refine the new bike.

There’s increased stiffness in both the head tube and bottom bracket, where the company has switched to Cervelo’s BBright standard. This standard, in case you’re not aware, combines a 30mm spindle with a 79mm wide bottom bracket shell, a full 11mm wider on the non-driveside than regular BB30 bottom brackets, with no impact on the Q Factor. This has allowed a larger diameter downtube, seat tube and chainstays to be developed for the new frame. And leading the improved aerodynamic are new wide stance rear stays that sit further away from the wheel to allow a smoother flow of air through the bigger gap that is created, and a deep airfoil shaped seat tube to shroud the rear wheel. The fork also has wider stance blades to decrease drag and follows a common trend with aero bikes to bow fork blades away from the wheel rim. Integration is a common buzzword with new bikes, and Factor gives the One its own OTIS (One Total Integration System) Evo one-piece handlebar and stem. It sits atop the unique fork which extends right from the dropout to the stem, and houses all cables internally for improved clean lines and reduced drag. Factor also says benefits include extra stiffness when sprinting and sharper cornering precision.

The Evo bar and stem is compatible with all groupsets including Shimano Di2. There’s also an optional computer mount. And it’s possible to adjust the stack of the bike with spacers that can be added or removed, without needed to trim the steerer tube or refit the cables.

The One frame comes with Factor’s own seatpost, and it’s available with a choice of inline or setback options. It uses a simple 1-bolt saddle clamp and is compatible with metal or carbon rails. Interested? There will be three colours to choose from; Crimson Red, Team Black and Sterling Silver. There are seven sizes from 46 to 61cm. The price is  £4,500 for the frameset, the same as the previous version.