Minoura has just paid us a visit to show off the new Kagura smart trainer which can be used in powered mode with electromagnetic resistance, or in non-powered mode with the choice of three different magnetic settings. It comes with Bluetooth and ANT+ FE-C compatibility so you can pair it with a Garmin bike computer, for example, control it with the Wahoo Fitness app, or use it to ride on Zwift.

We had a quick spin on the Kagura in the office and it certainly feels a lot like riding on the road thanks to its motorised brake and virtual flywheel. Some trainers can feel jerky, especially at higher levels of resistance/ lower cadence, but there’s none of that here – there’s enough momentum that you don’t get that stop/start feeling. The other thing we noticed is that the Kagura is ready to go straight out of the box. If you just want to flip it up, lock your back wheel in place and get riding, you can do that, using it as a non-smart trainer. The various magnetic settings allow you to tune the level of resistance (and, as with any other trainer, you can flick through your gears, of course).

This means you can use it anywhere – for warming up before a race, for example, when there’s no power source. 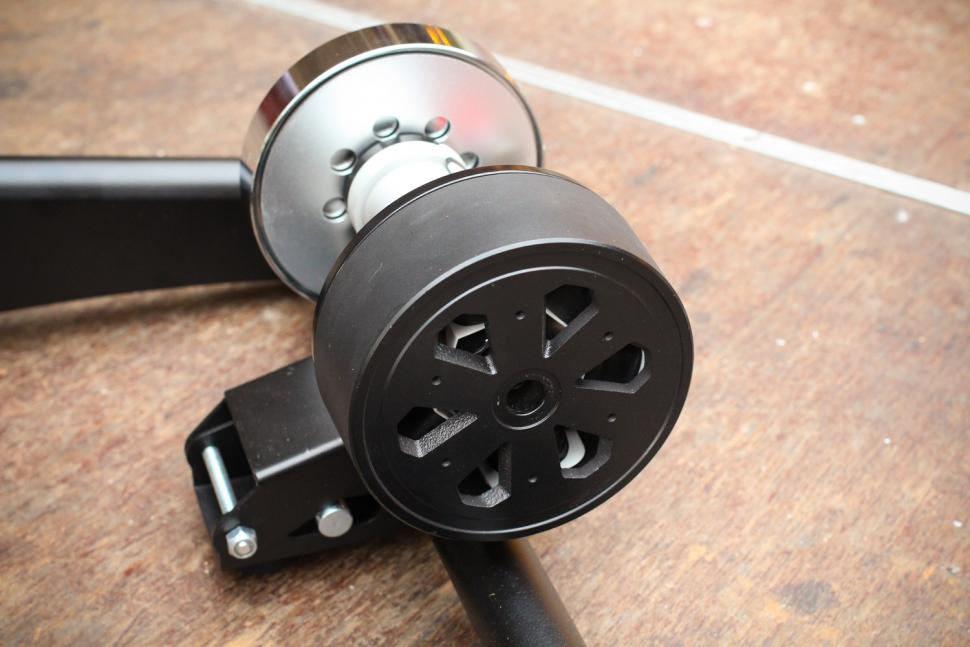 You can either lock the position of the upper elements of the frame or go for ‘gravity mode’ where the frame isn’t fixed meaning that there’s the weight of you and the bike on the aluminium roller.

If you really want to get the most from the Kagura you’ll want to plug it in. Then you can pair it with an iPhone or Android phone via partner apps, and use it with things like Zwift, Sufferfest, FulGaz and so on to simulate an outdoor riding experience. The software receives the speed and power data from the trainer and controls the brake. Or you could get it talking to a Garmin Edge 820 bike computer, for example, and have it simulate the resistance of a course, activity or workout. The Kagura is really quiet and smooth whichever mode you’re using, and Minoura says it can provide accurate hill climb simulations with a maximum power of 2,000 watts and a 20% maximum gradient. Those are the same figures that Tacx claims for its Genius Smart trainer, by the way. Minoura claims that the power data it sends is accurate to +/-1.5%.

You’ll be able to update firmware wirelessly via a Minoura app that’s being worked on at the moment. The Minoura Kagura is priced £599.99 and will be available next month. You can buy just the resistance unit for £499.99 and retro fit it to existing Minoura frames. The FG220 is an interesting hybrid roller for £299.99. You fix your fork to the stand at the front and rest your rear wheel on the rollers. There’s not a lot of resistance and you get a far less realistic feel than that of the Kagura or even standard rollers because there’s no front wheel link up. On the other hand, the FG220 is compact and folds into its own little bag for transportation. The idea is that you can take it to a race and use it for warming up.