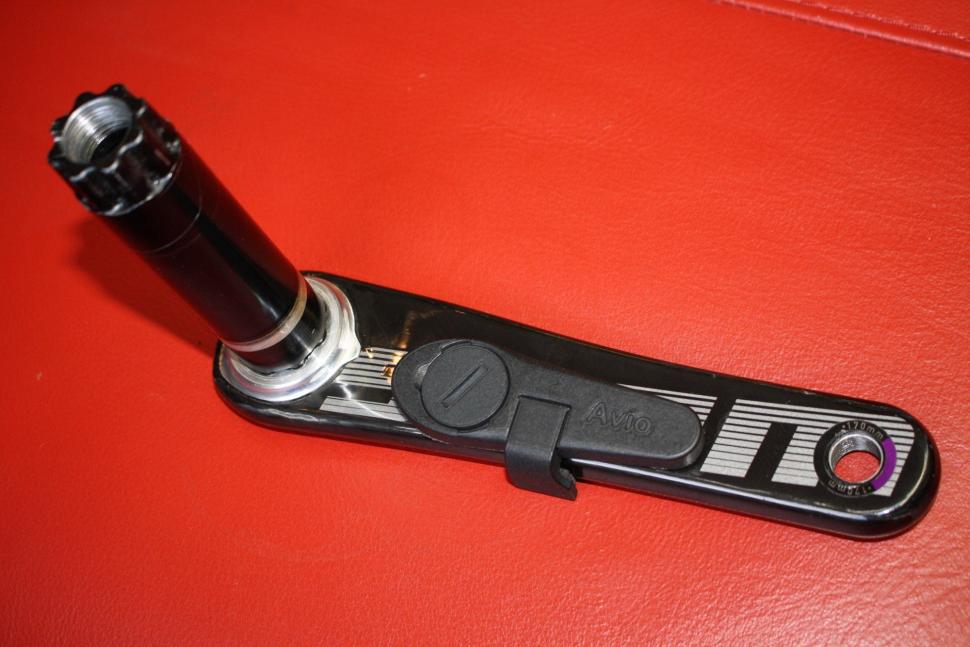 A new British power meter called the Avio PowerSense is set to launch in the next few weeks at a retail price of £250. The system retrofits to an existing crank and can communicate with a head unit via ANT+ or Bluetooth.

The Avio PowerSense has been adapted from a design used in rowing – hugely modified, obviously. Like the vast majority of other power meters, it relies on a strain gauge as the basis for its measurement, here attached to the left (non-driveside) crank. 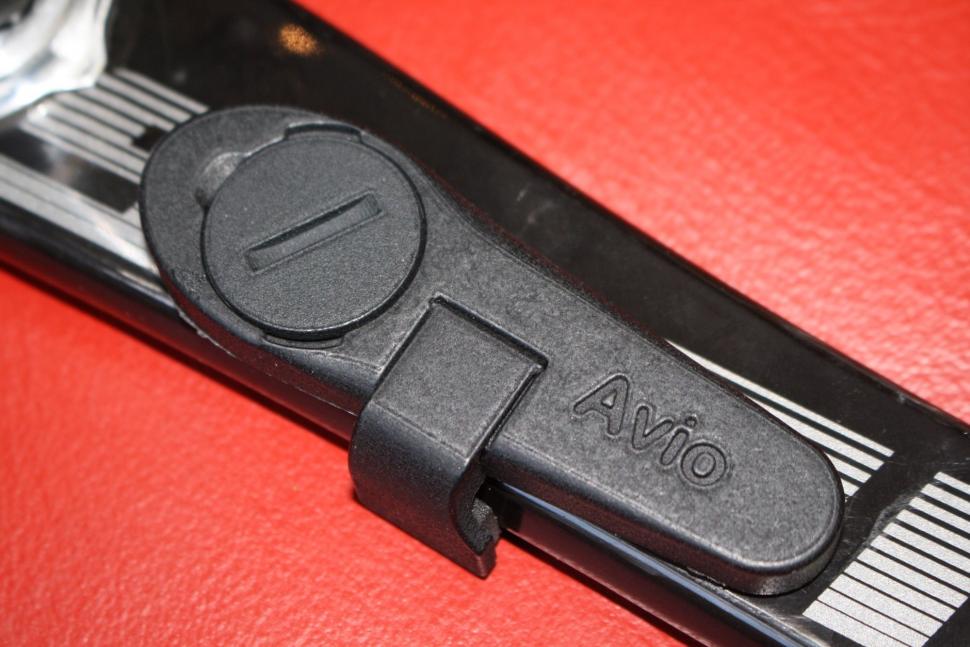 Avio says that you can fix the PowerSense to any crank, including carbon-fibre options. That’s interesting because Stages took a few years between launching its power meter on aluminium cranks and eventually getting to a point where it was happy to go with carbon cranks too.

The only limitation, according to Avio, is that you need a certain amount of clearance between the crank and the frame – the unit extends about 10.5mm from the crank’s inner face. This is just a little more than a Stages pod, for example. That means PowerSense (like Stages) isn’t compatible with every frame and crank combination, but it’s simple to measure to see whether it’ll work with your setup before you buy.

It tends to be higher end bikes that have less frame to crank clearance while more affordable bikes tend to have more, as a general rule. That’s fine with Avio because it is aiming the PowerSense at the mass market of riders who want to optimise their training rather than just at those who have a high level of disposable income.

You can fit the Avio yourself or have a bike shop do it for you. Avio reckons that the bonding process, using industrial structural adhesive, is pretty much foolproof and will take a typical user about 15 minutes. Once in place, initial calibration involves hanging a 10kg weight (which could be 10 litres of water less the weight of the container) from your crank arm. This only has to be done once. 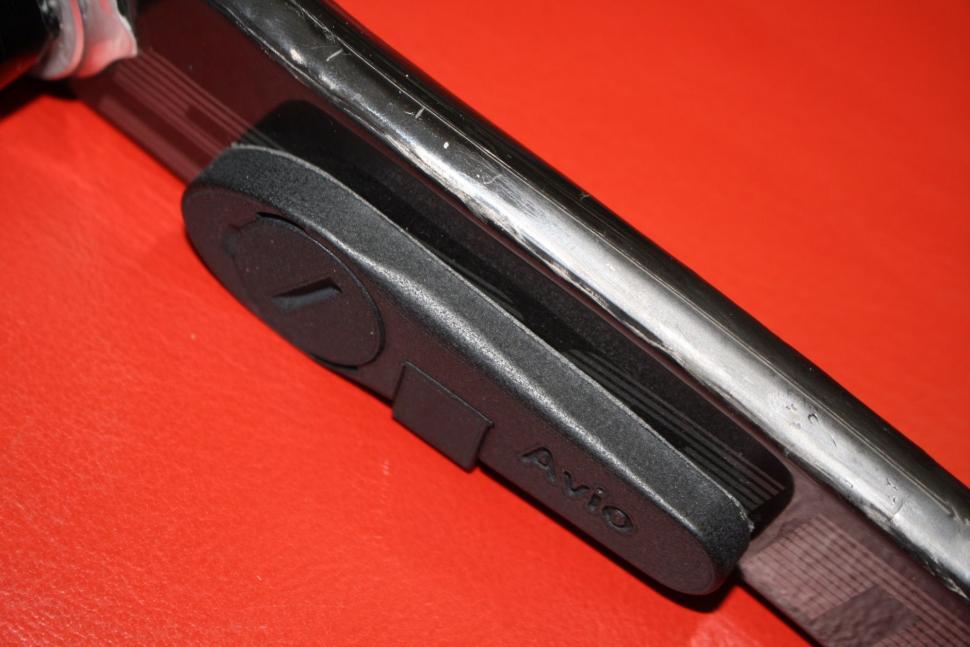 You don’t need to zero offset the device at the start of every ride to account for changes in temperature because there’s a thermo probe in the processor chip. If the system experiences zero force after the temperature has changed by +/- 3°, that’s taken as the new zero. However, Avio suggests that you perform a zero offset before a ride if the conditions are significantly different to those of your previous ride – if you’ve gone to ride in the Alps, say – because temperature compensation can only do so much to ensure that you get a true reflection of the power generated, and it advises a zero offset every week or two as a matter of course in order to establish the correct baseline.

The PowerSense is powered by a CR2032 coin cell – a type that’s readily available in supermarkets, garages and so on. You can twist the battery compartment open using the replacement cell rather than needing to root around for a coin that fits, which is a thoughtful touch! Avio says that the cell will last for about a year with typical use.

The PowerSense unit is certified IP67 which means that it has complete protection from dust and “ingress of water in harmful quantity shall not be possible when the enclosure is immersed in water under defined conditions of pressure and time (up to 1 metre of submersion).”

I’ve already mentioned that the PowerSense is 10.5mm deep; it’s 90mm long, 30mm wide at its widest point, and weighs 120g. For comparison, a Stages system adds less than 20g to your bike, but 120g is hardly heavy.

The strain gauge is contained in what Avio calls the sensor leaf, which is the hinged part that reaches around to the leading edge of the left crank. Like the body of the PowerSense, it is bonded in position. The leaf sensor might look vulnerable to damage but Avio says there has been none during extensive testing, the cranks just spinning backwards if it is subject to any force with no rider on board. 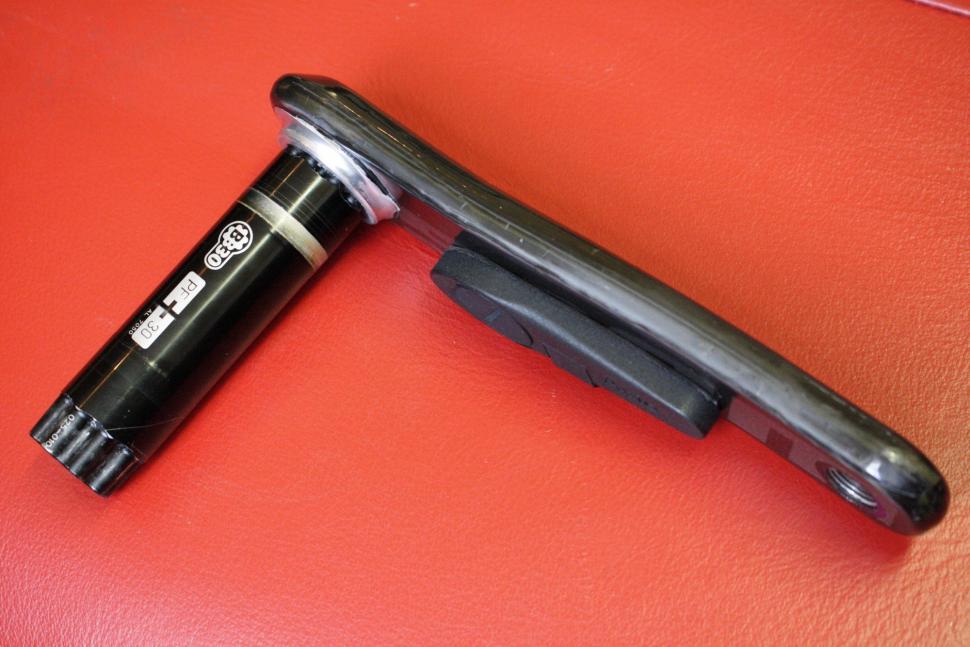 The PowerSense has a clever way of taking your cadence (no magnet is required) that Avio wants to keep quiet. You don’t need to set anything up there, it works automatically.

Avio has compared the PowerSense’s results with those of existing power meters and also used its own specialist equipment to gauge its performance.

“We’ve tested the product, blasted it with a fire extinguisher, put it in water for a little while… The electronics don’t suffer, the code for this is perfect.

“When you put electronic devices like this together the components you use all have a level of accuracy. We can obtain these components with a multitude of different levels of accuracy, the more accurate ones begin more expensive. The component we use that has the largest range of accuracy is 1%, so that’s what we claim for the device.” The system sends data via ANT+ or Bluetooth so it’s compatible with all popular head units, like Garmin Edge bike computers. You can get all of the main power data that you’d expect – current power, averages, normalised power, intensity factor and training stress score. As a single sided unit, it doesn’t offer left/right balance (so you can’t tell how much power is coming from your left leg and how much from your right leg) although Avio suggests that it could release a dual sided option at some point in the future. All of this data is uploadable via the head unit to Strava, Training Peaks, Golden Cheetah, Zwift and so on.

What's the catch? Well, although we've seen the Avio PowerSense, we've not used it so we can't comment on the performance. The team behind it – comprising genuine cycle enthusiasts – wants it to be a commercial success, obviously, but says it is also motivated by the desire to get the technology out there for the benefit of other riders, hence a price of £250 rather than £350, say, which would still undercut other crank-based options.

The Avio PowerSense will be available next month through independent bike dealers and from www.avio.mobi. The £249.99 price includes a 12 month warranty.