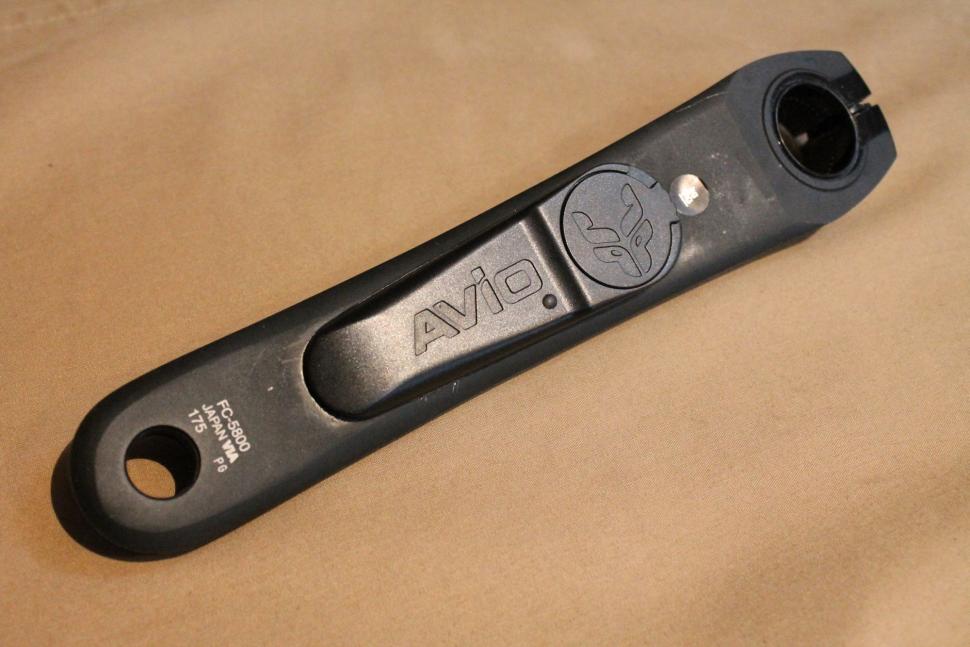 Crank based system will be available for £19.99 per month
by Mat Brett

Avio is now shipping its PowerSense power meter, priced from just £199, and we've just taken delivery of a review unit here at road.cc.

We first told you about the Avio PowerSense in April 2017, the finished version having been expected soon afterwards. The launch was delayed but the PowerSense is now available and at some stage, probably for a short period starting in January, you'll be able to pay in either a lump sum or in stages – £19.99 per month for 10 months.

The PowerSense design has changed considerably since we first told you about it, so let's run through a few of the key points...

PowerSense is a crank-based system, measuring your left leg only. Stages and 4iiii offer propositions that are similar in that respect. PowerSense takes its readings and doubles them to give your power figures, making the assumption that your two legs are doing an equal amount of work, as do all other single-sided systems. Avio does have a dual-sided system in development, but it's a way off being launched. 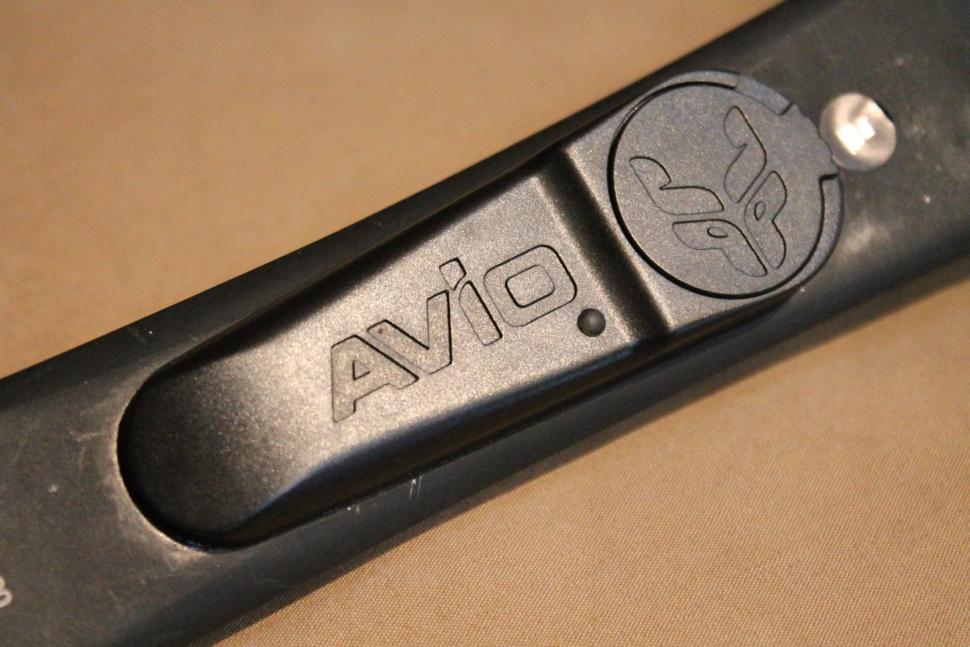 One of the reasons why PowerSense is so cheap by powermeter standards is that in most cases you're not buying the crank to which it is attached. Instead, you send the crank that's already on your bike to Avio, based in Oxford, and it'll be sent back with the PowerSense fitted (£250) within a few days (five days is what's currently quoted). 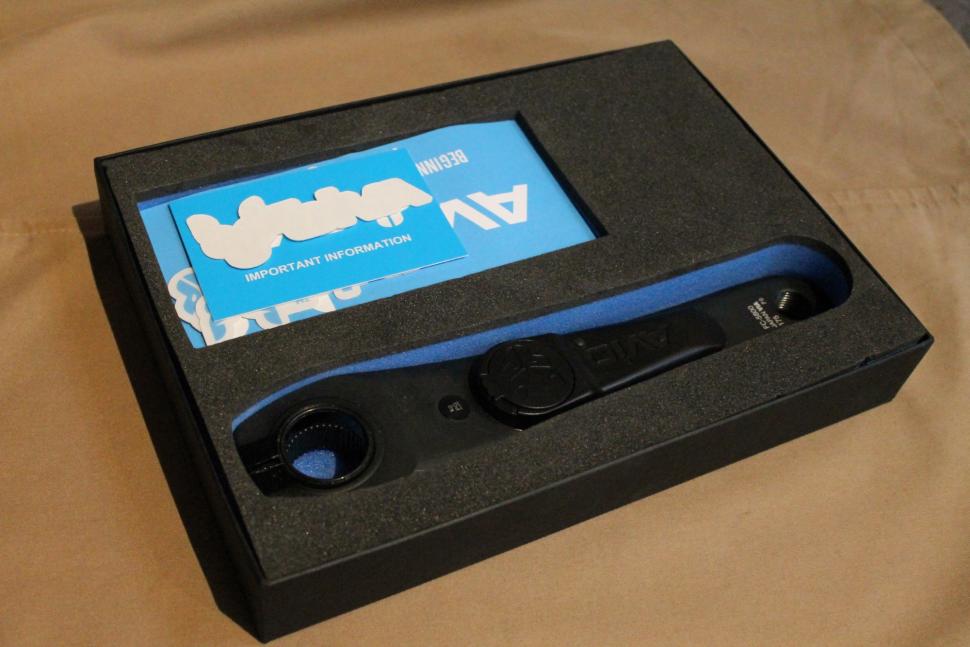 I fitted a PowerSense to a Shimano Dura-Ace crank. See how I got on below.

Avio says that it can fit a PowerSense to any crank (including carbon-fibre options) that has a smooth inner face. That means that Shimano cranks are in while grooved Rotor cranks, for example, are out. If you want to retro-fit a PowerSense yourself, it's Shimano only for the time being, although Avio plans to release other shapes for different cranks in 2019. 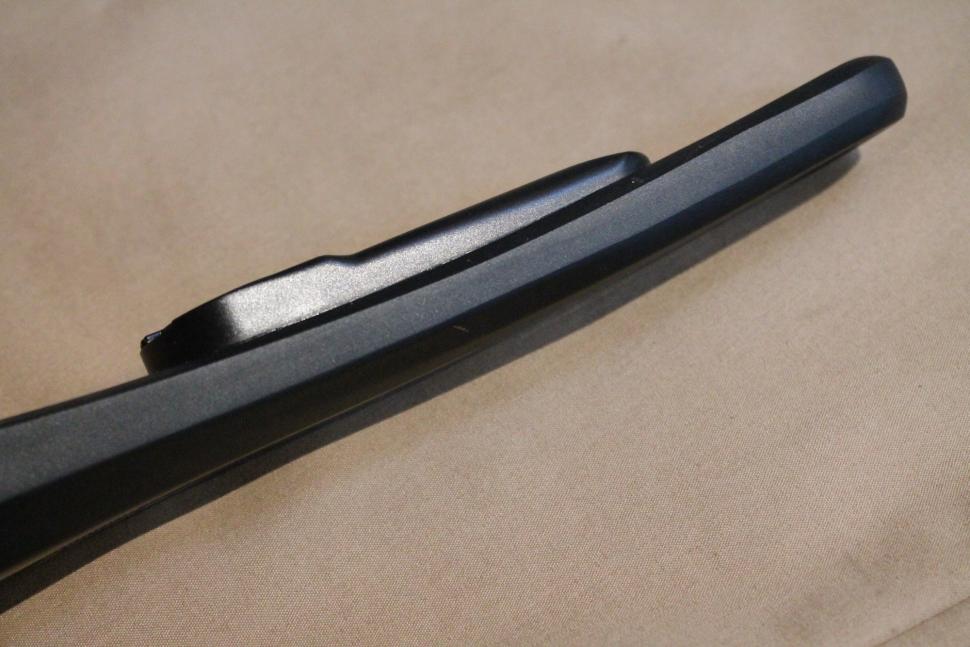 The fact that the PowerSense unit protrudes from the inner face of the crank isn't a problem on most bikes but it does mean that it won't work on some, particularly those with a chainstay-mounted rear brake, such as a Scott Foil, because there's not enough space. There's enough clearance for PowerSense if you have a 10mm gap between the crank and the chainstay on your bike. Avio reckons that it's do-able if you can fit a finger of Kit Kit in there... Plus, once you've checked, you have a Kit Kat!

PowerSense sends data to a head unit via ANT+. That means you can view everything on a Garmin Edge bike computer, for example, or a Wahoo Elemnt (or numerous other devices). It can also communicate with an Android phone via a proprietary Bluetooth system, allowing you to view data on Avio's app (an iOS app is in development but it's not ready yet).

You can see all of the usual metrics: current power, averages, normalised power (NP), intensity factor (IF) and training stress score (TSS). 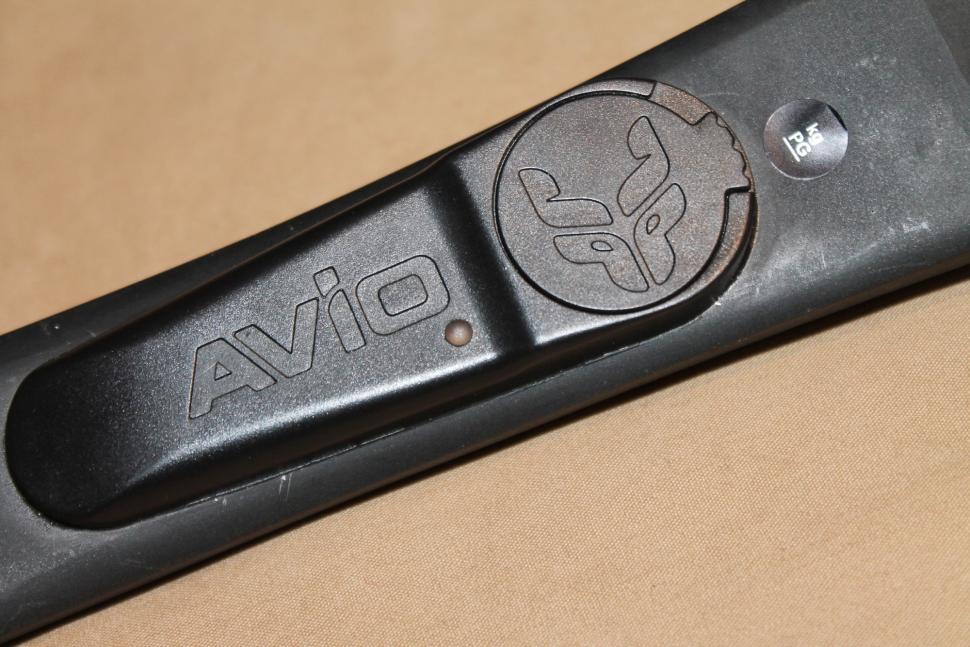 PowerSense has an IP67 rating, meaning that it is protected from dust and the effects of immersion in water to a depth of up to a metre. In the real world, that means that water won't get inside while you're riding, even if you're racing cyclocross.

On the other hand, don't go giving it a jet wash; Avio says that it might survive the experience or it might not so it isn't worth the risk, and you're far too sensible to get a jet washer anywhere near bearings and expensive paintwork/lacquer anyway, right?

In terms of accuracy, Avio reckons that a correctly fitted PowerSense will never be more than 2% out. It has active temperature compensation built in to adjust the calibration to the environment (it does this once a minute on the basis that this is unlikely to vary significantly over a shorter timescale, and more frequent adjustment will eat into battery life). 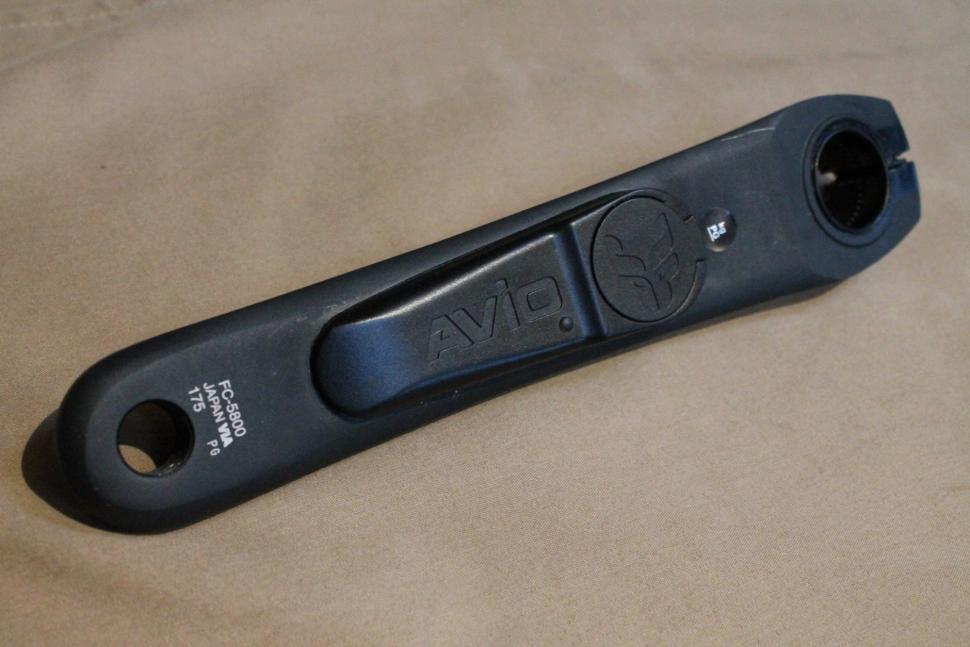 Speaking of battery life, Avio says that recently made changes have allowed it to increase runtime from 45 hours to 100 hours (it quotes 100 hours but reckons you're likely to get a little longer) with unlimited standby time, because a switch in the circuit means that when it is off it is fully off. It takes a CR3032 battery.

As mentioned, Avio says that Bluetooth communication is on the way — the aim is to have it ready well in advance of next race season — and there's a left/right system planned for further down the line. Like the current system, this will be retro-fittable to an existing chainset.

Avio also says that it will offer a chainset of its own with PowerSense fitted although, again, that's a way off. 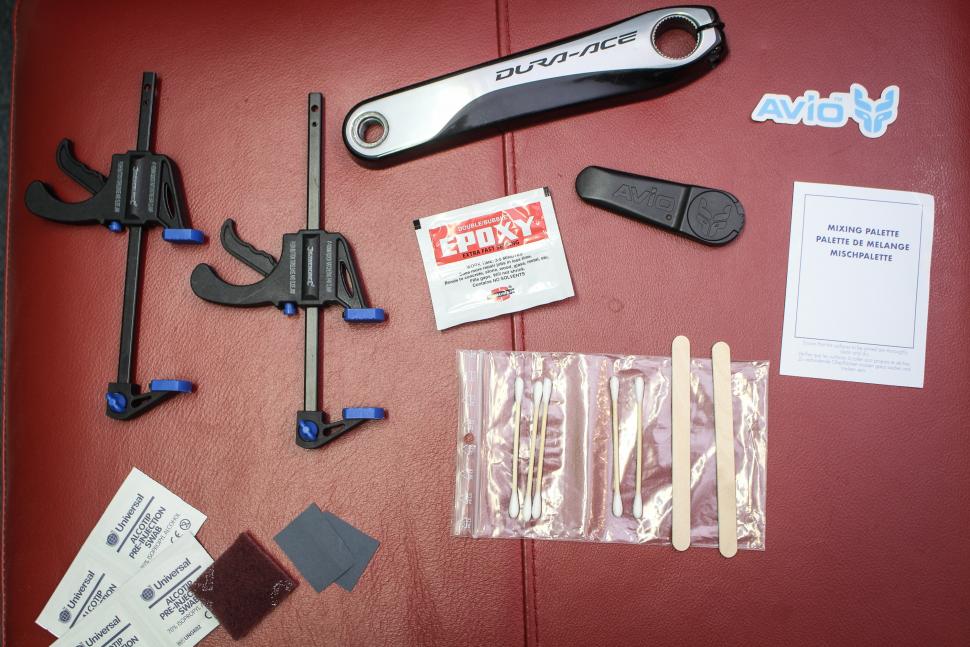 Buying a PowerSense and fitting it to a crank yourself isn't nearly as problematic as you might think; in fact, it's quite fun in a Blue Peter kind of a way. I gave it a go — under guidance, admittedly — and found it pretty straightforward (yes, I had post-bike cleaning dirty hands and fingernails when Avio came calling; oh, and I live in a hole in the ground). Instructional videos are available on Avio's website and also on YouTube. 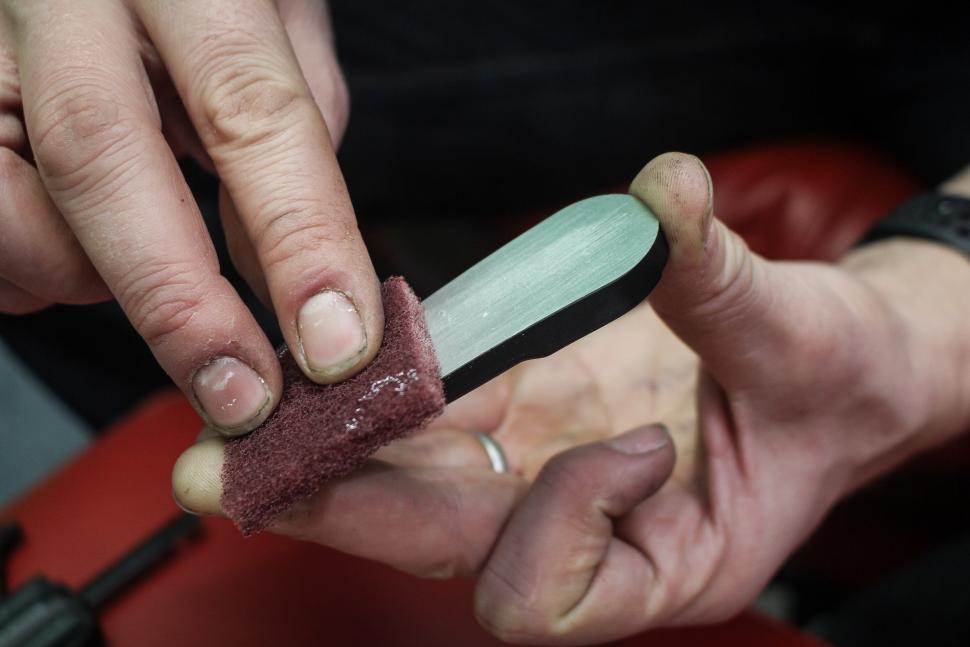 First of all you give the back of the PowerSense unit a rub with a scourer and then clean it with an alcohol wipe. 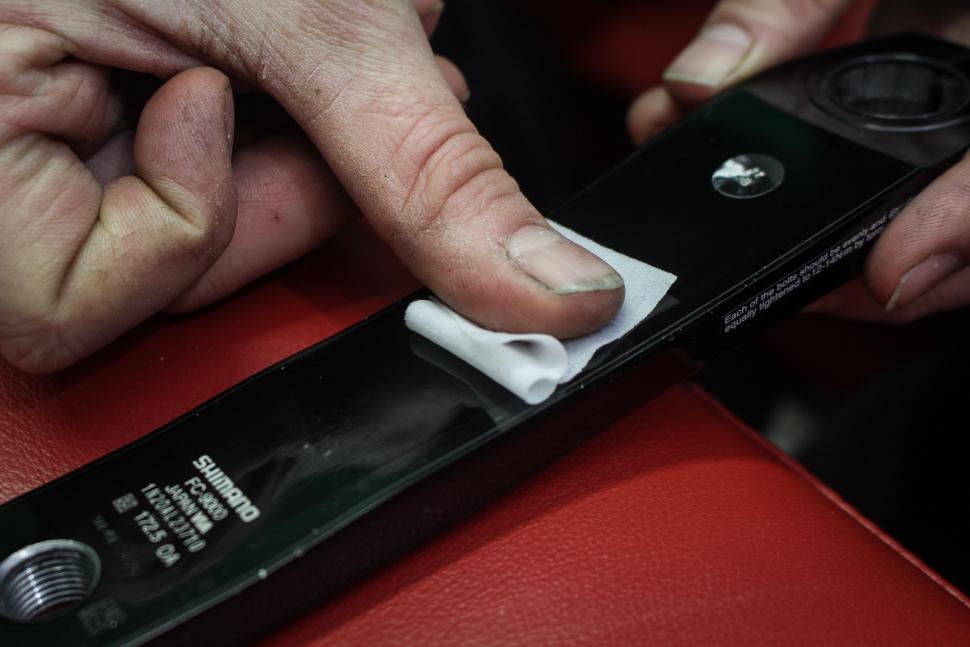 Then you rub the sticking area on the back of the crank arm with 600 grit wet and dry sandpaper and give that a wipe too. Simple. 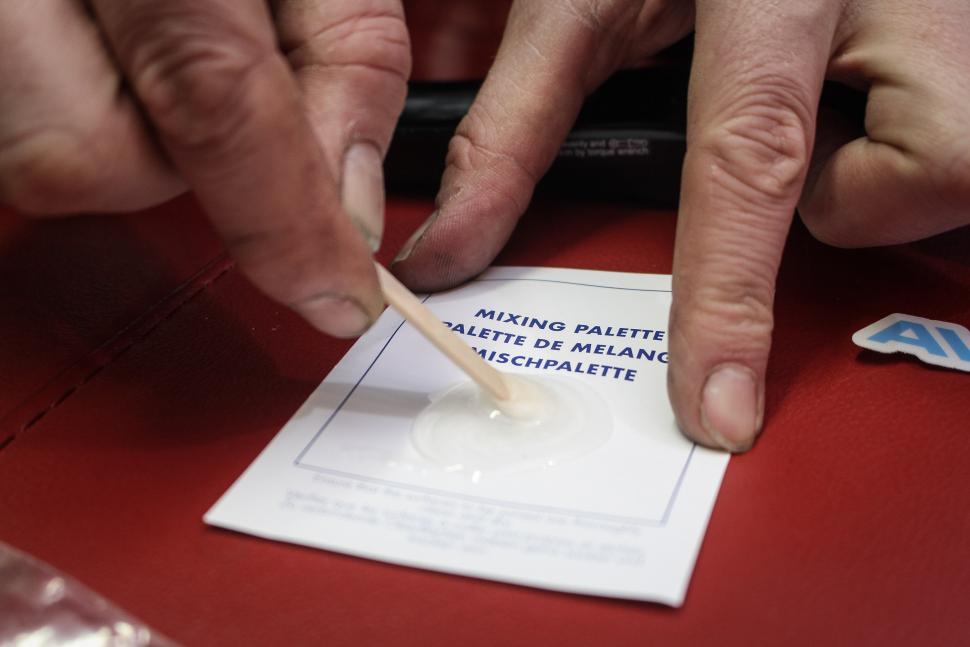 Next you mix up the epoxy resin. It's a two part system. You snip off the tops of the two sachets (a pair of scissors is the only thing you need that's not included in the pack), squeeze the contents onto a little piece of card, then mix the two parts together with a wooden stirrer (it's a lolly stick in disguise). The next stage is to scoop the epoxy onto the back of the PowerSense and spread it around fairly evenly. Then you put the PowerSense into position on the crank arm and use little triggers to tighten two clamps that hold it in place (don't worry, you can't over-tighten these). 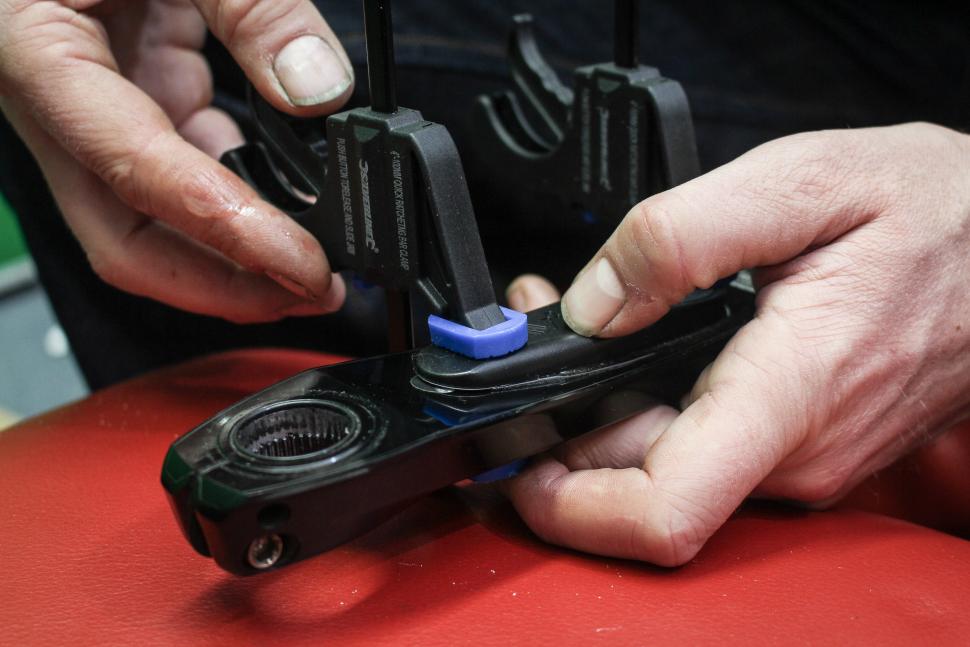 You'll inevitably get some extra epoxy on the crank arm in the area around the PowerSense, so you just need to remove it with a few cotton buds and use an alcohol wipe to mop up what's left. It might sound like it could be a messy process but the alcohol wipes get rid of any sticky fingerprints in seconds. 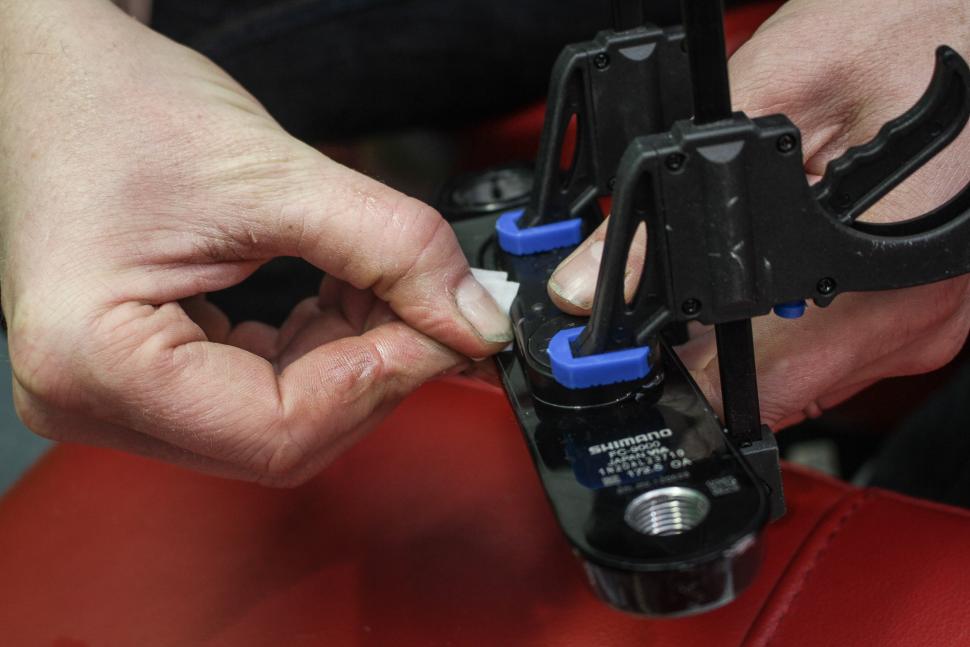 You need to leave the clamps in place for 24hrs for the epoxy to dry, then you calibrate the system with a 10kg weight (which can be 10 litres of water in a bag provided with the kit).

Granted, all of this is more complicated than sending off your crank and having Avio do the job for you, but it's perfectly do-able even if you're a bit, you know, cack-handed. Follow the instructions and you won't mess it up.*

You could even attach the PowerSense without the fit kit — there's nothing in there that you couldn't source elsewhere — but buying it all together from Avio is the easier option.

All of the information given above comes from speaking to Avio; we've not used the PowerSense yet. We do have the device that we've retro-fitted to a crank and another that was assembled by Avio so we'll be getting them on bikes soon and starting to put a review together.

Get more info from www.avio.mobi/powermeter-cycling/​