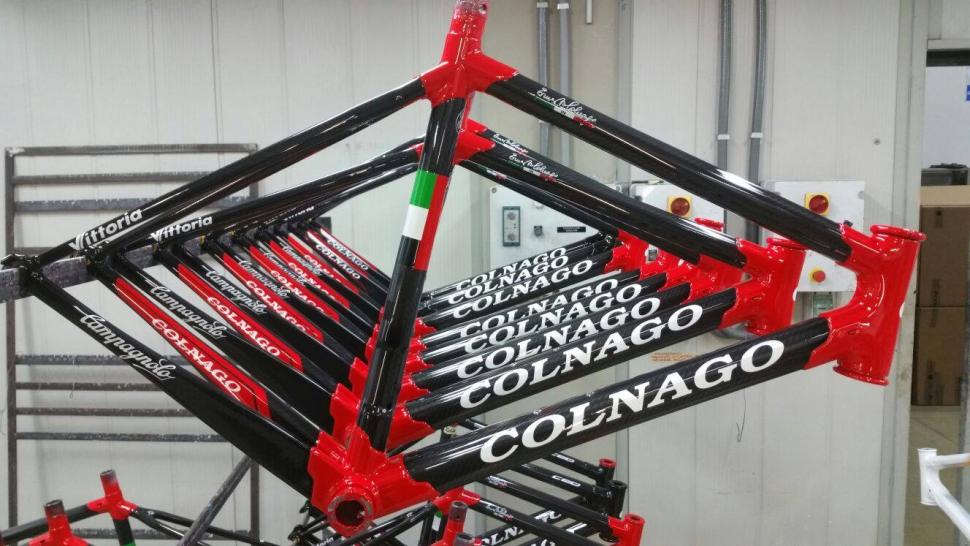 Colnago is rejoining the WorldTour next year, here's a first glimpse of the new race bikes
by David Arthur @davearthur

Next year will see the return of the historic Italian bicycle brand Colnago to the professional peloton, and this week we’ve seen a first glimpse of the bikes it’ll be supplying to the new UAE Abu Dhabi team, which yesterday received the 18th and final spot in the World Tour.

Colnago shared a photo of a rack of C60 frames painted in a red and black paint job, all ready to be assembled for the team to train on this winter. We assume the team will also have the new Concept aero bike to use for stages and races that favour the aero advantage.

Colnago announced it was backing the former Italian team Lampre, which had been taking over by Chinese company TJ Sport Consultation, a few months ago, but yesterday it was confirmed the team, under the UAE Abu Dhabi name, has been awarded the 18th and final UCI WorldTour licence for 2017.

The team, which includes Brit Ben Swift in its lineup, has a two-year licence and means the team has successfully met the UCI’s sporting, financial, administrative and ethical criteria.

Colnago signed a four-year deal with the company that bought out Lampre. It’s a decision based on wanting to represent Italy as a “nation that still wants to be a competitor in the world of cycling thanks to its skills, expertise and experience - virtues that rise above any technological development,” says the company.

Earlier this week we also got the first glimpse of Vincenzo Nibali's new Merida Scultura race bike as well, and yesterday Tom Boonen shared a pic of his new Specialized Venge ViAS Disc road bike he's currently training on this winter. Expect to see a lot more 2017 pro bikes being unveiled in the coming weeks, and stay tuned to road.cc to see the latest.