This bike needs no introduction. It the Pinarello’s Dogma F8, of course, the Italian company’s flagship race bike and ridden by Chris Froome to Tour de France success on two occasions. 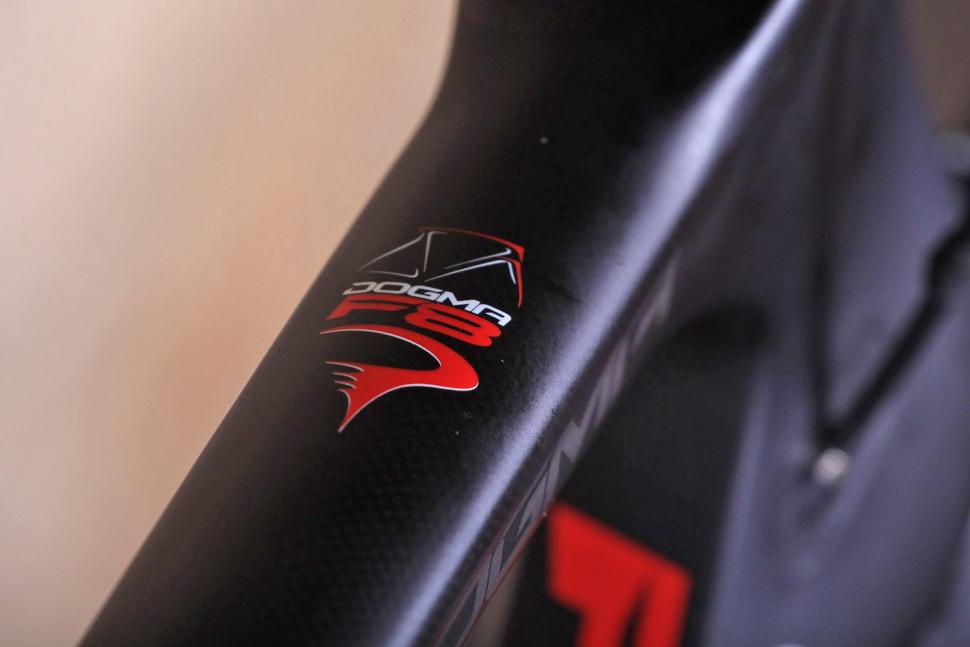 It’s the eighth generation Dogma and Team Sky and Jaguar were heavily instrumental in the development of the updated bike, launched two seasons ago. Those developments focused on weight loss, improved stiffness and aerodynamics, the latter the biggest change in road bike design in the last decade. 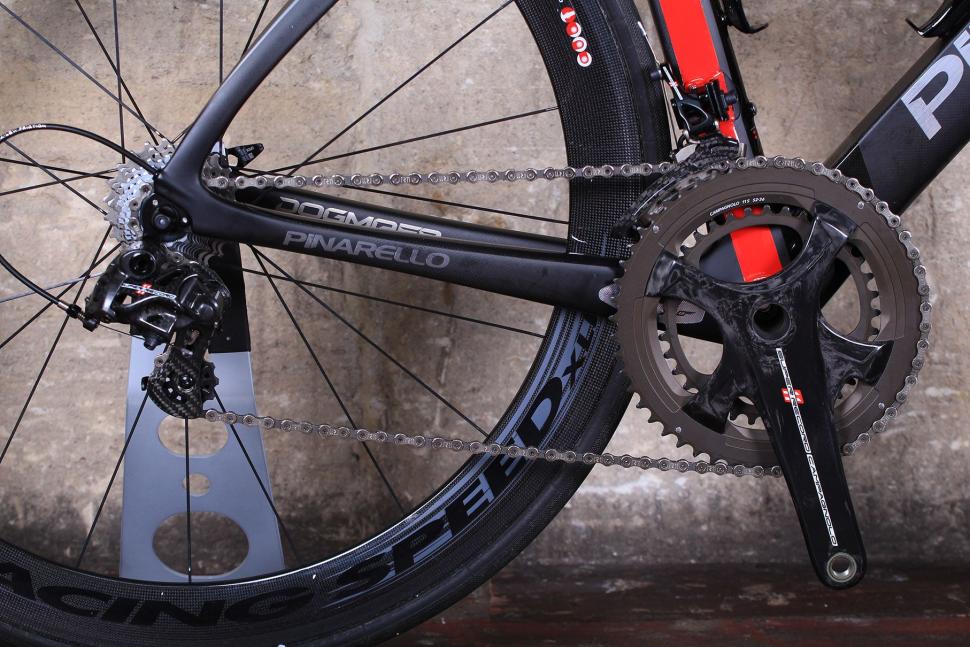 We’ve been spoilt with a Campagnolo Super Record mechanical build and Fulcrum Racing Speed XLR tubular wheels. It costs £8,250. Yes, it’s certainly not a cheap bike, but builds do start at a slightly more reasonable £5,950, with a choice of Chorus or Shimano Ultegra and Dura-Ace. 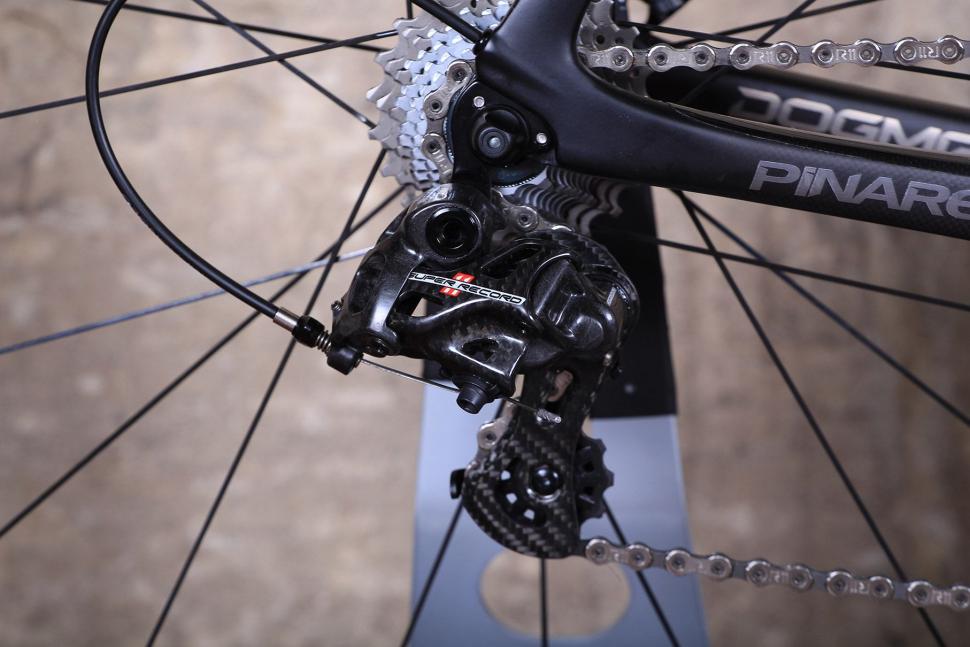 When you're spending this sort of money, you can tailor the build to a certain extent, and wheels can be adjusted to suit your budget - tubular tyres probably aren’t the most sensible option given the state of UK roads. Pinarello has fitted its own MOST branded carbon fibre one-piece handlebar and stem and topped the carbon seatpost with a Selle Italia saddle. 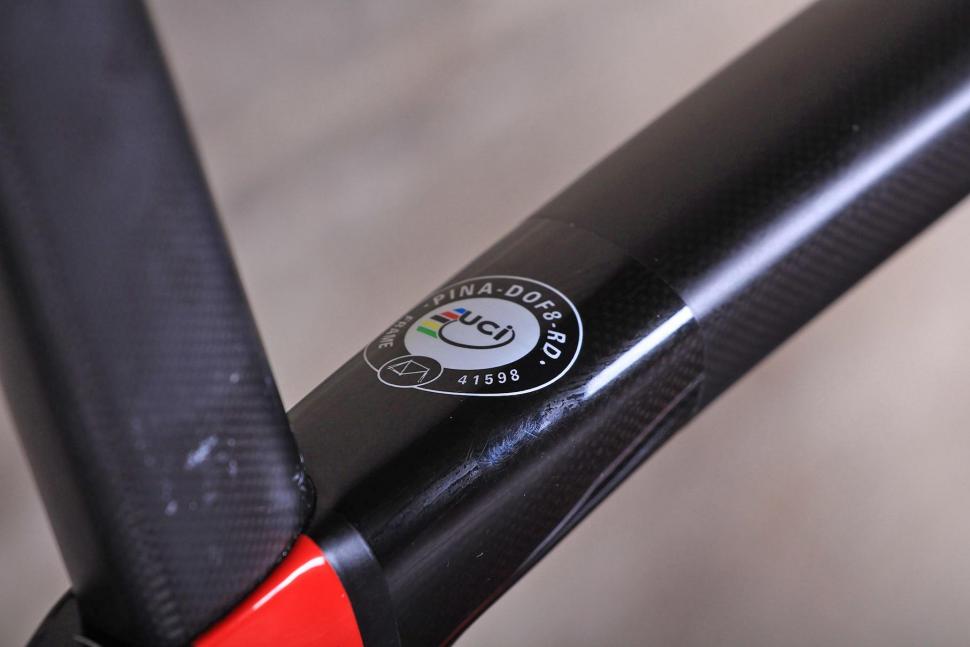 The frame is constructed from premium Torayca T1000 1k carbon fibre through, contributing the price tag but also the weight and stiffness. Weight is a claimed 860g for a size 54cm, with the fork 40g lighter, making the frameset 120g lighter than the previous Dogma 65.1. But reducing weight wasn’t one of the key driving forces of the development, instead, it was aerodynamics, and the bike is a radical departure from the previous model. 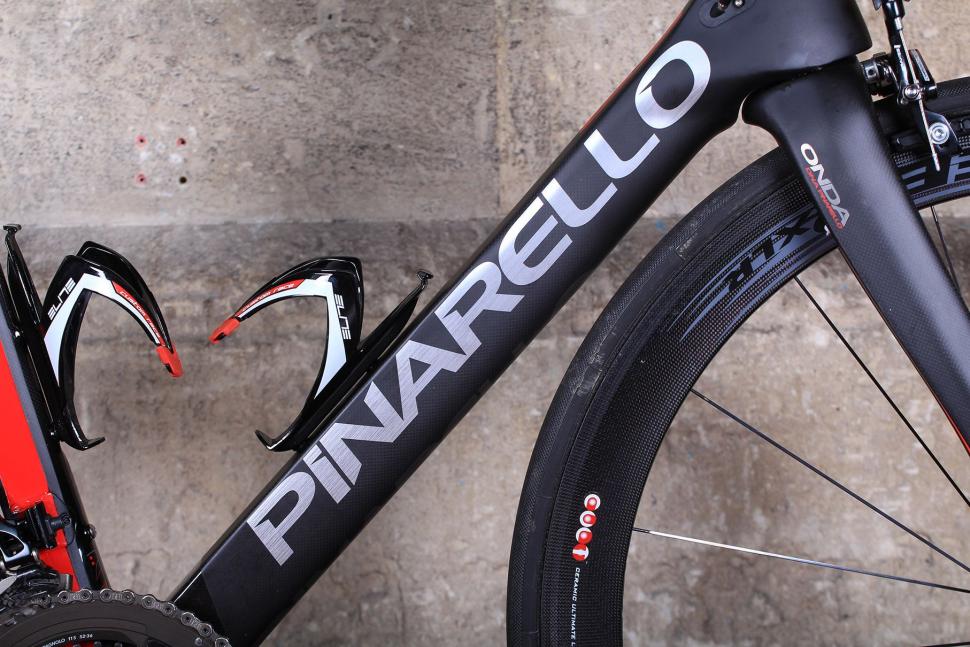 Look closely at the frame and fork and you can see the efforts the company has gone to reduce drag, with teardrop shaped tubes, a FlatBack profile down tube that is essentially a Kamm Tail shape like many bike brands use. The fork legs curve elegantly away from the front wheel, the idea being to reduce turbulence as air is forced through the gap between the wheel and fork. 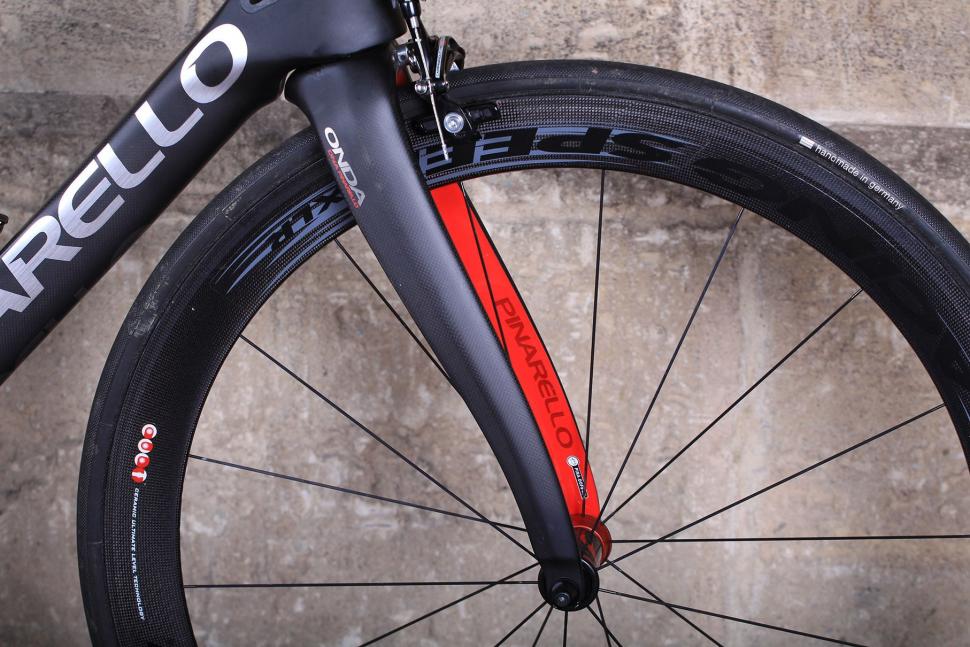 “With aerodynamic sections derived directly from the Bolide, the F8 fork legs act as sails that promote forward motion in crosswind conditions,” says Pinarello. “This effect is amplified when riding in stronger winds. The wind has always been an inevitable resistance that increases rider fatigue and hinders performance. Now with the Dogma F8, cyclists are able to exploit it. 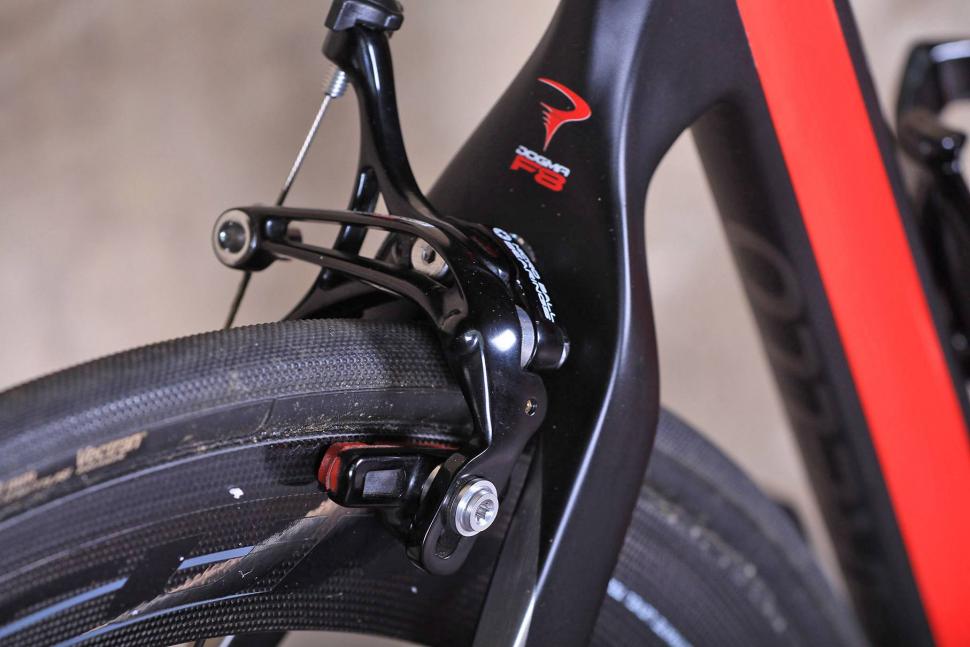 A monostay rear triangle helps to keep the brake caliper out of the airflow. The brakes are regular dual pivot brakes, not the more modern direct mount design.  All these changes, based to an extent on its work on the Bolide TT bike, contribute to a claimed 47% improvement in aerodynamics. As with all aero claims, it’s best to take such figures with a pinch of salt. All cables are routed inside the frame and it’s compatible with all current mechanical and electronic groupsets. Integration is a key buzzword with aerodynamic road bikes, and Pinarello has hidden the seat clamp inside the top tube. It’s adjusted via two very small Allen bolts at the back of the seat tube - care needs to be taken when making changes, there’s a very real risk of rounding the bolts if you’re not extremely careful. Despite such modern details, Pinarello has stuck with a conventional external threaded bottom bracket, a detail that will no doubt please press fit sceptics. Those aero spacers under the stem connect together and maintain the aero efficiency of the bike, and you can easily adjust the height of the handlebar. If you bought this bike you'd probably know your handlebar height and trim the steerer tube once you've settled on the number of spacers you need. 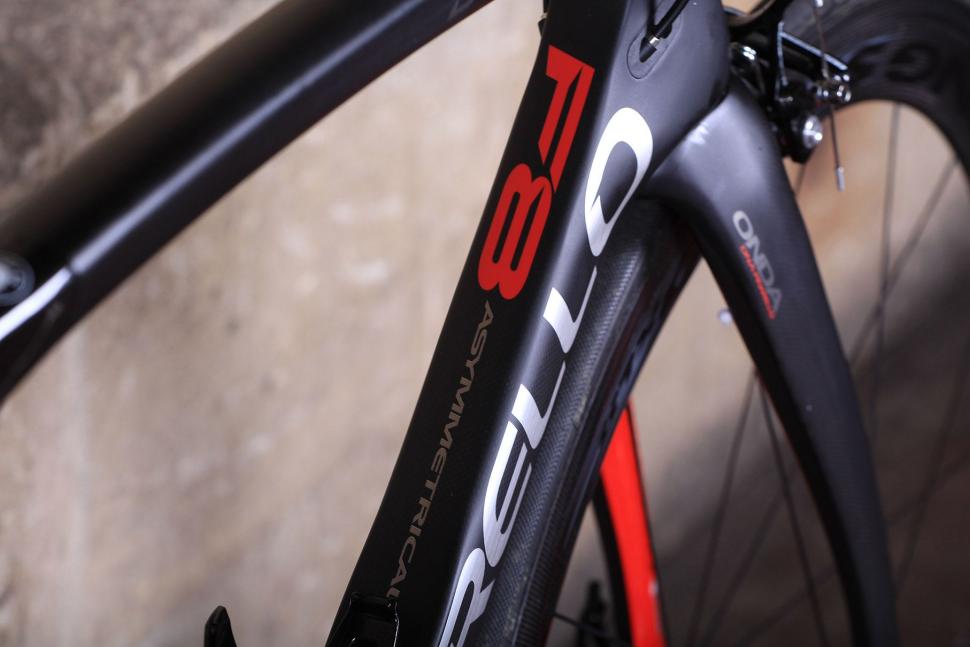 Pinarello has long pushed its asymmetric approach to frame design, in an effort to balance the pedalling forces through the frame, and that continues with the Dogma F8. “The frame needs to be asymmetric to balance the force that is applied to only drive side,” say Pinarello. “Your legs push on both pedals of your bicycle, while the chain drives only on the right side of your bicycle. It is obvious that a frame must be asymmetric to allow you to ride symmetrically.” So there you go. 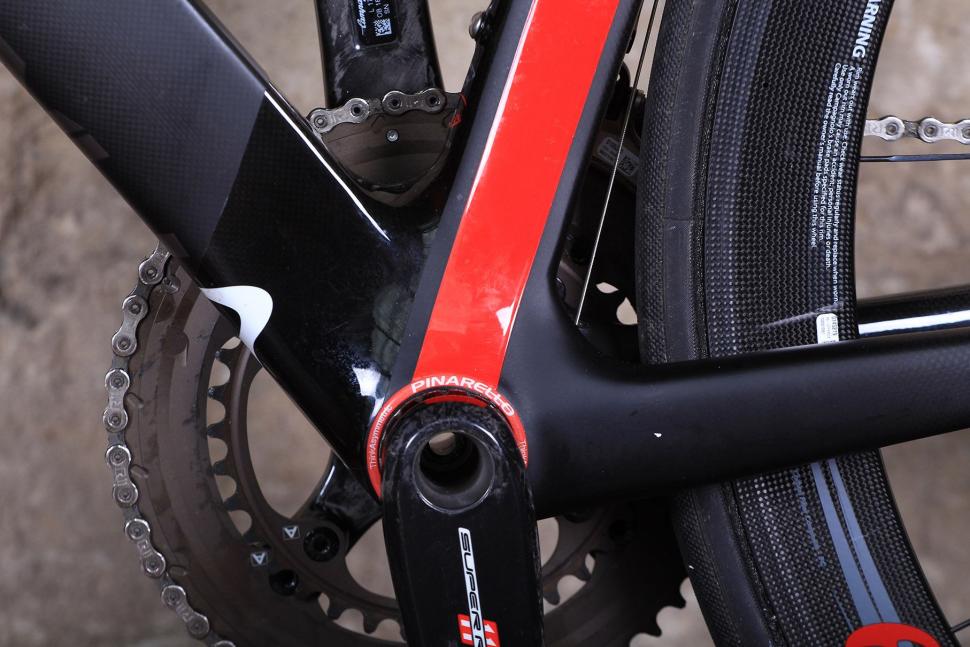 The Dogma F8 certainly earns its superbike tag on account of its price and race performances, and we’ll find out how it fares when we get it out on the road. Full test coming soon.

What of the rivals?

Putting the price tag of the Dogma F8 into perspective is this £10,949 Storck Aerfast Platinium that we tested last year.

How about the Trek Madone 9 Series Project One that Mat tested last year? It combines state-of-the-art aero design with the novel IsoSpeed decoupler to provide a smoother ride.

There’s also the Look 795 Aerolight which takes integration to another level, and the bike we tested cost £4,449.

Giant’s Propel Advanced SL 0 is the most expensive model in the company’s range and costs £5,499 with Shimano Dura-Ace Di2. You can read our review of a cheaper Propel model here.

And if you want aero without the premium price tag, look no further than the Canyon Aeroad CF SLX 6.0, the base model in the German brand's range, and costs just £2,699 with a full Ultegra groupset.