6
10
Robust and easy-to-use light that does away with scrolling through modes to get to full beam, but short run-time in high
Well made
Easy to use
Secure mount
Direct switch to full beam
Short run-time in Power mode
Pricey
Weight:
115g
Contact:
www.oxfordproducts.com
How we test

The Sigma Buster 300 is a bit more than a 'be seen' light, but doesn't quite have enough oomph to allow you to confidently navigate dark lanes at pace. The beam pattern is pretty basic but the ability to jump straight to full beam without scrolling through other modes is a real plus. Run-time on high is quite short, though, which is a shame.

The Buster 300 is a compact, well-made unit featuring a single Cree LED with a maximum light output of (surprise) 300 lumens and a range of 70 metres.

The aluminium alloy body has a sleek, matt finish and feels solid in the hand. A few drops onto asphalt, from handlebar height, haven't made any dents on it. The underside is ribbed to help with cooling; ribs are intended to dissipate heat more effectively.

The light has an IP44 weatherproof rating, so it can handle water splashes from any direction. I've had no issues, even in heavy rain. I always leave test lights on for bike washing too; there's been plenty of that recently and it's still functioning fine. Ensuring the port cover is securely closed goes without saying.

It has has four different modes – Power, Standard (150 lumens), Eco (70 lumens) and Flash. Claimed run-times for each mode are: 1.5 hours, 3 hours, 6 hours and 13 hours respectively. Actual run times for Standard, Eco and Flash were all within 5% of those claimed, but Power mode was a little 'fussy'; it would run for 65 minutes before switching to Eco, then slowly dimming to nothing (if you didn't interfere, this would run for almost 2 hours). If I gave it a minute or two, I could double-click back into Power and get another 10 to 15 minutes out of it.

The Buster 300 is powered by a 2,000mAh USB rechargeable battery. Sigma claims a three-hour recharge, using the micro USB cable which comes in the box, but I was actually getting it charged in just over two hours, a nice bonus. It can also be recharged while in use, which is great news for anyone relying on battery banks while riding, though the supplied cable may need swapping out for a longer one.

The on/off button is easy to locate and operate, even with thick winter gloves. It's switched on with a double-click – great for avoiding accidental 'switch-ons' in a bag. A long press switches it off. A single press, when the light is on, cycles through the four modes. 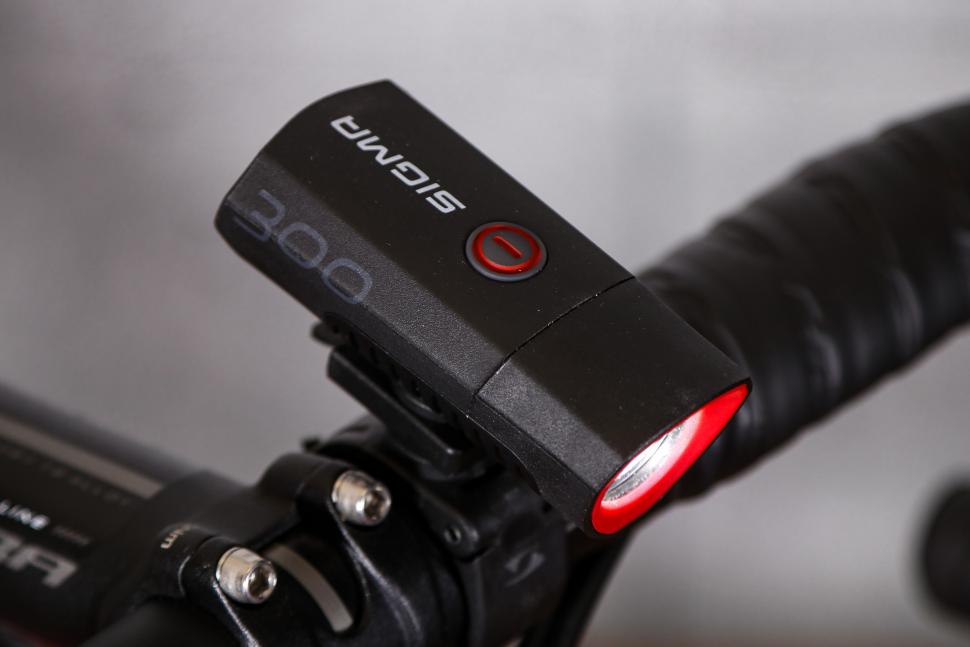 Sigma has also included a great feature (that I wish more manufacturers should): a double-click in Standard or Eco mode takes you directly to Power, conveniently bypassing Flash when you might need to see exactly where you are going.

The Buster's beam is quite focused, close to a torch, though not quite as extreme as Knog's Plugger. In Power mode, it's sufficient to navigate lanes that you are familiar with at a decent pace, but I certainly wouldn't be confident riding at much more than 20mph on unfamiliar roads in the dark; potholes and roadside hazards further up the road aren't picked up as they would be by something more powerful.

Standard mode is more than sufficient as a 'be seen' light for urban riding, and Flash mode is excellent for daytime riding.

Given this, I'd say the Buster 300 is good for any commuter living just out of town – a bit of unlit-road riding, plus some time on well-lit roads.

I've used it loads on my winter road bike too, for daytime rides; the flash function is striking enough to get you noticed from a distance, even on a murky day.

It's possible to get the light with a silicone band mount, but I've been testing the screw-bracket mount. It's tool-free but does take more time than a silicone band, and you need to cut down adjusters to get a snug fit (it can fit 25.4mm to 31.8mm bars). The big plus is stability: there's none of the wobble or vibration that can occur with a silicone band. 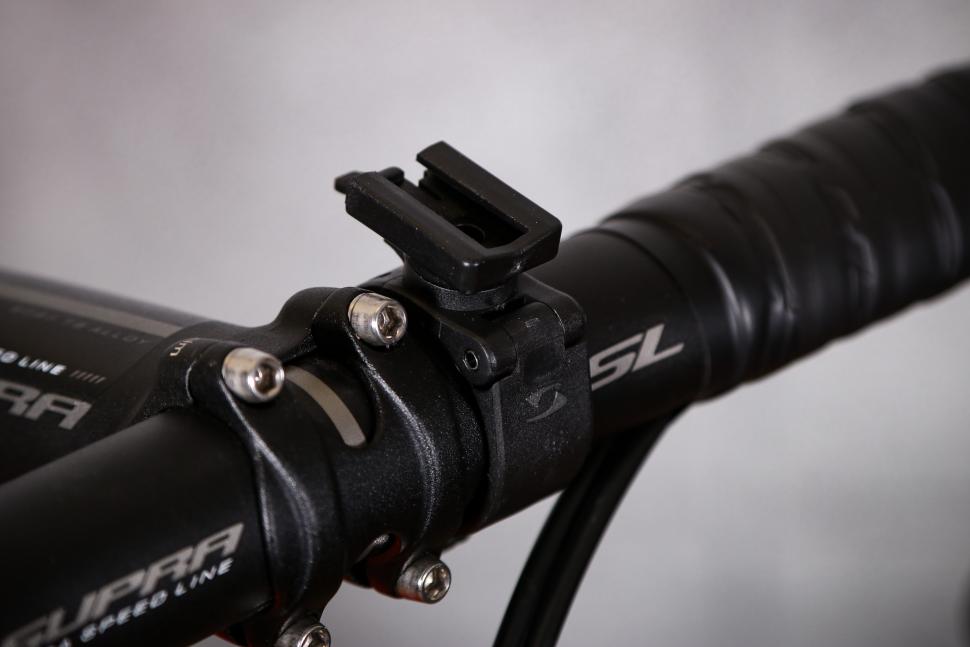 The light slides onto the mount and over a ratchet, and takes some force to get it off again. I certainly wouldn't have concerns about it taking a tumble while riding.

I love that the bracket puts the light well proud of the bars too. I could sit it right next to my Garmin without compromise. 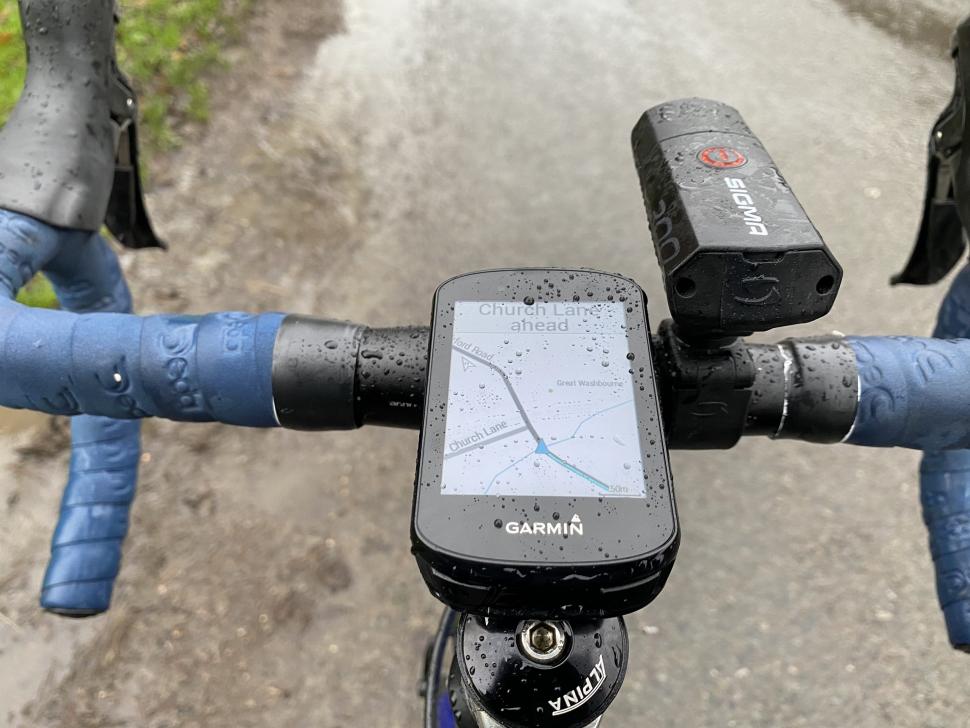 The bracket also rotates on a ratchet, through 360 degrees, and Sigma also shows the light under the bar, an option if yours is busy, though you won't notice the battery indicator signalling 'low' here.

An action camera adapter is included in the box, and there's a helmet mount available but not included; Stu tested one with the Buster 700.

Overall, the Buster 300 is a sleek design with easy-to-use controls, and I love how it looks and works, especially the raised, sturdy mount and the 'no-scroll' feature. However, the battery life is a bit of a let-down, making it more of a be-seen unit with a good flash function. This then makes it comparable with cheaper lights.

Sigma says, 'The BUSTER 300 is the all-rounder for every occasion. With 300 lumens and 70 metres of light range, it gives you the best view of roads and paths. Four light modes and a fade-in and fade-out function ensure that just the right amount of light is always available. With the slider you can easily detach the power light from the holder and quickly attach it again.'

Able to be charged during use

Splash resistant in accordance with IP44

I had the screw bracket on test; it does position the light proud of the bar, which is great, but a silicone band is likely more convenient for switching between bikes.

Not a huge amount of life on full beam; great on flash and eco. On paper the charging time is quite long (3hrs), but in reality it was better, taking just over 2hrs.

It's on a par with comparable lights, but you can get better value elsewhere – longer-running and brighter.

Simple to use and reliable as an urban to suburban light.

Well-made, tidy-looking unit without too many modes.

Comparable to some similarly specced lights, such as Knog's Plugger. But there are higher specced lights for not much more, or even less.

Would you consider buying the light? Not at full price.

There's lots to like about this light: its looks, the sturdy raised mount, the 'no-scroll' feature. However, the duration of the Power mode is a bit of a let-down, making it more of a be-seen unit with a good flash function. This then makes it comparable with some much cheaper lights. Overall, I'd say it's quite good.