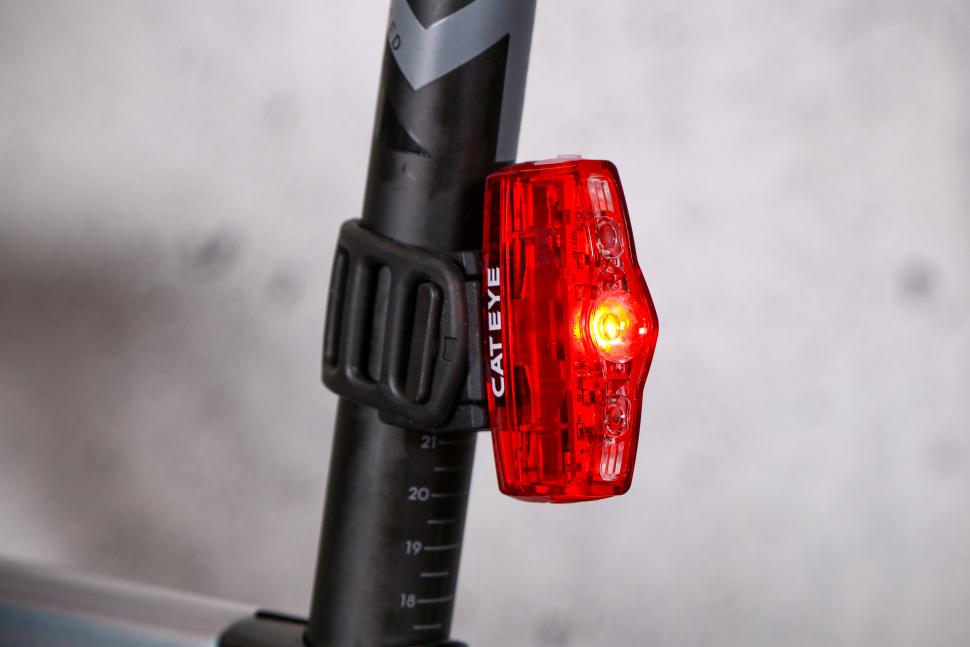 7
10
Robust, reliable, easy to use rear light, but it doesn't fully exploit its power thanks to rather frantic flash patterns
Quick to recharge
Fits a range of seatpost shapes
Decent price
Not as bright on full power as expected
Weight:
49g
Contact:
www.cateyecycling.co.uk
How we test

The Cateye Viz 150 Rear Bike Light is a compact unit with plenty of punch, although it's not as eye-catching as you'd expect considering the lumen count. Still, it's relatively cheap, easy to swap between bikes and stands up to the elements well.

This lamp is available in a range of brightnesses, from the downright antisocial Viz 450 down to the Viz 100, with a 300 lumen version and this 150 in between. For the cash it's a decent unit offering a range of modes with good, if not ground-breaking burn times.

The four modes top out at a maximum brightness of 150 lumens in Daytime Hyperflash, which has a pattern that can only be described as hypnotic – it flickers crazily between the three LEDs. The problem is they all flash so fast the largest, brightest LED in the middle is only lit for a tiny amount of time, and you don't get the full effect of the brightness. 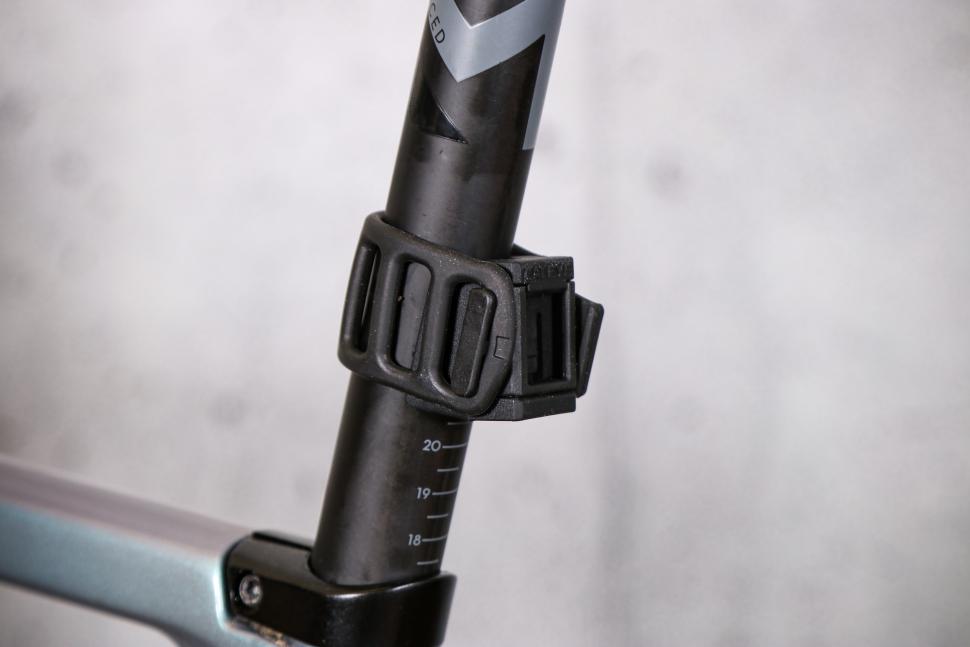 Obviously that's not a picture (above) of the full brightness, or indeed any of it... use it in the dark and it's likely to irritate anybody behind; not so much because of the intensity, but because of the pattern.

The Group mode is next in line for output at 50 lumens. To be honest, because its flash pattern is so much more sedate it actually seems brighter, but it's a bit too much for those sitting on your wheel.

The Flashing mode dishes out just 15 lumens and is noticeable in the dark, if not exactly outstanding – and again, it's hypnotic in its pattern design. At least its strobing effect is noticeable under streetlighting.

The rest of the burntimes are 15 hrs, 11hrs and 70 hrs as you drop down through modes. After a few charging rounds I found those times to be easily achievable on all but the coldest of rides. Sub-zero I'd say they drop by around 5%.

So, the modes are a bit topsy turvy. The one I got the most use out of, day and night, was the Group Ride mode due to its more subtle flash pattern. With the LEDs being lit longer it gives better side illumination too.

The recharge time is 3hrs, dependent on your charging source. An LED on the side shows the battery status. That's all the facts and figures out the way, so how does it work as a light? Easily, as it turns out.

The mount is a rubber block designed to work on a range of seatpost shapes, from round (21.5mm to 32mm diameters), or with an outer circumference of 130mm for aero or Kamtail (tear drop shaped). It is also angled to allow for the seat tube's slant.

Whatever the seatpost shape, I found the clamp secure and it never vibrated around as the ride went on. It's held in place by a ladder style rubber band and the SP-15 bracket, as it is known, allows the light to be mounted vertically or horizontally.

The Viz is rated at IPX4, which means it can cope with splashing water from any direction. It works just fine as long as you make sure that the charge point on the base of the light has its cover sealed shut. 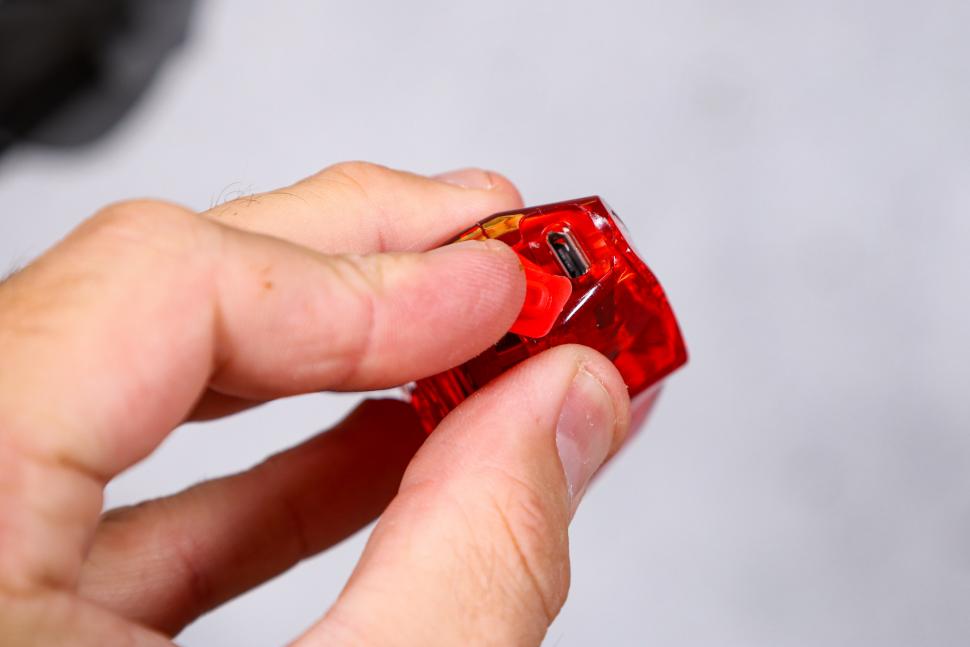 All in all, the build quality looks decent, with Jez saying in his review of the Viz 450 that he has used many Cateye lights over the years and found them to last for years.

At £29.99 you are getting a fair amount of illumination for your money. It's £10 cheaper than the Knog Blinder Skull rear light which kicks out 100 lumens. It doesn't do that in any sort of great fashion though, as it's more focused on creating the skull shape.

The Topeak Taillux 100 rear light is £36.99 and also gives 100 lumens. It offers good battery life but doesn't account for seat angle (LEDs work best when you view them head on), and it's easy to switch on accidentally with its single-push start mode. The Cateye requires a long press.

The Viz 150 has a lot going for it. It's a neat, affordable rear light that chucks out a decent amount of illumination, but I feel its flashing patterns don't make the most of the available power. The Group Ride mode is the winner here at just 50 lumens; imagine what could be achieved with all 150 lumens in a sensible display.

Cateye says, "Compact, bright, and versatile, the ViZ150 stands out with high visibility from OptiCube lens technology and Daytime Hyperflash mode in an economical package."

It's a decent all round light, but I don't feel it makes the most of the lumen output due to its flash patterns.

Battery Auto Save (The mode automatically changes to flashing when the battery power gets low.)

For IPX4 it performs well.

The burn times are okay, although the charge time is pretty nippy.

It depends on the mode; the Constant and Group Ride modes use the lighting power well, but the other two flash too fast to exploit the gains.

There is plenty of power here, although I don't think Cateye has deployed it that well.

Considering the output it's reasonably well priced. I've mentioned some of the competition in the review.

Did you enjoy using the light? Yes, but I'm not a fan of some of the flashing patterns

Would you recommend the light to a friend? If they wanted a powerful light for not a lot of money

Throw price out of the window and the Viz 150 is above average, but it doesn't exploit the amount of lumens on offer due to those chaotic flash patterns. It's well built though, stands up well to the weather, and the mount that copes with differing seatpost shapes is a bonus. You are getting a lot of light for the money.