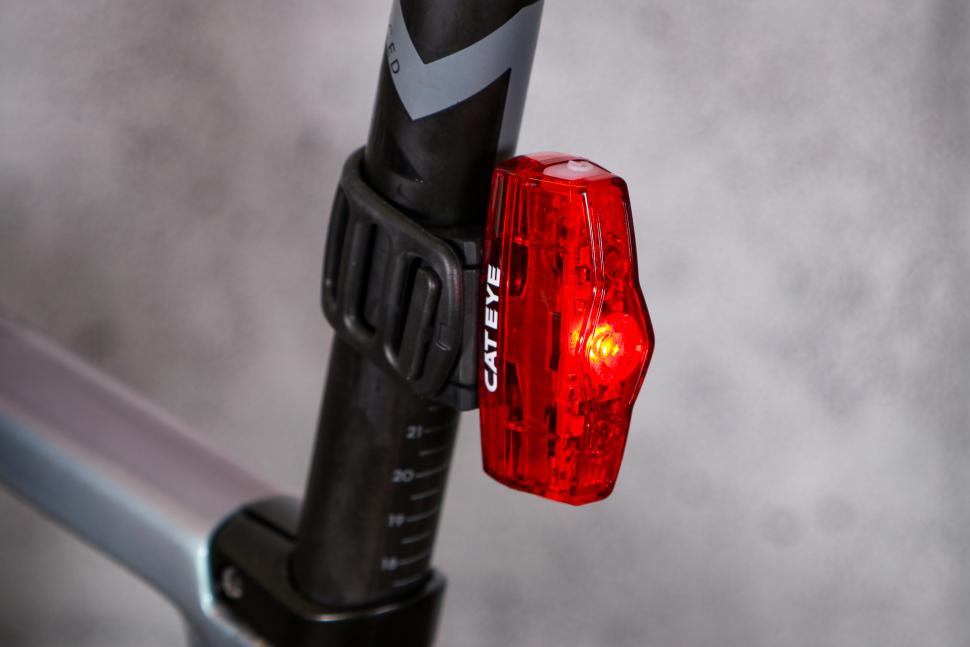 The Cateye Viz 100 is a bright rear light with four modes and an auto kick-down, should you get caught out. It's generally capable and likeable; the only thing I'm not completely sold on is the mount's strap.

The light's Opticube lens promises 300-degree visibility, and is also designed to be equally effective mounted vertically or horizontally. It's made from polycarbonate and employs collimator technology to direct the three diodes' output most effectively.

IPX4 for weatherproofing is on the low side but not uncommon, and perfectly adequate for road-biased riding.

The 3.7V 500mAh lithium-Ion cell is reckoned to handle 300 charge cycles before performance begins to taper off, so a good couple of years' continual use. It charges via micro-USB, with a snug-fitting cover keeping things dry. The cable is a little short for my tastes, but easily substituted. 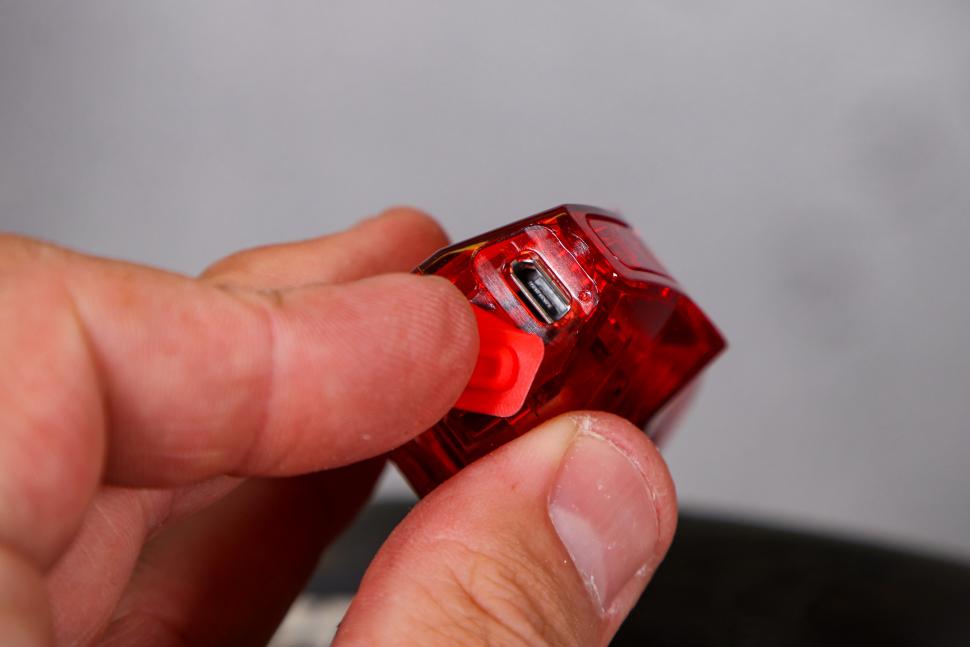 The switch is a clear, rubbery affair, requiring a definite press. It's easily found and operated wearing full-finger gloves, and once on, singular presses course through the modes. A memory function, defaulting to your last choice, is super-convenient, and there's a battery life indicator integrated within the switch, too.

Cateye has taken some interesting routes on this front in recent years, not all of them meeting their potential. This one's called the SP-15; essentially, an aero seatpost-compatible block into which the light slots. It can be mounted horizontally or vertically. 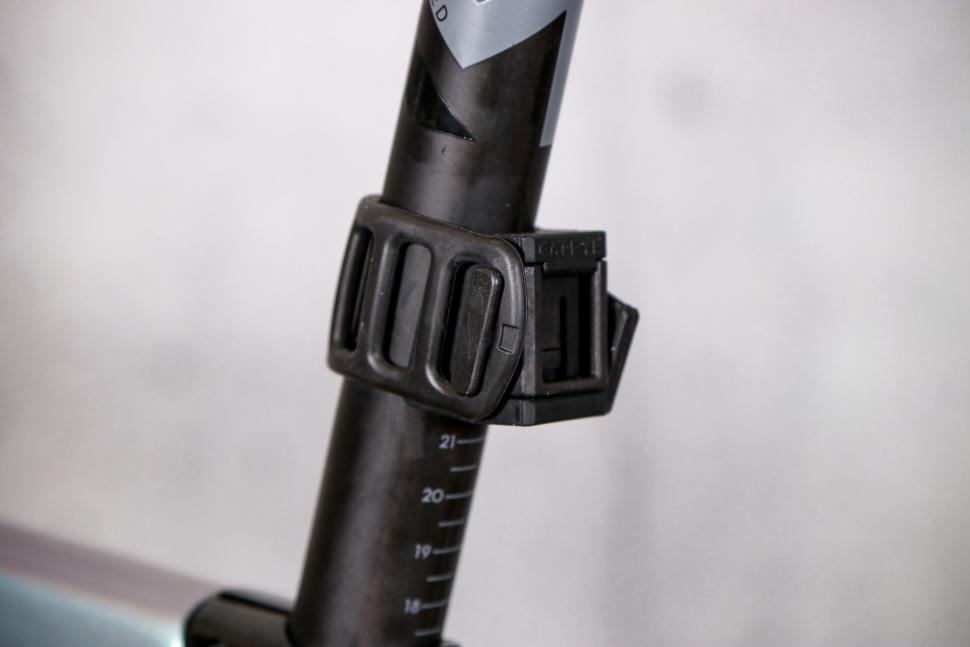 The ladder strap hooks into lugs either side, and I've had no issues with standard round profiles between 25.4 and 30.8mm. It's compatible with some box-section trailer tubing and helmets, too.

Although functional and reliable enough, it's a bit fiddlier than others, especially in the dark. Exchanging it for an oversized o-ring type improved matters.

Group ride is interesting and possibly a misnomer. I don't know about anyone else, but wheelsucking 35 lumens isn't my idea of a good time. I can see the relevance if you're at the back, but it's a bit brash at relatively close quarters. 'Shepherd mode' might be more appropriate.

Get past this and it's proven my default for those lonely lanes I'm so fond of, and far more impressive than the flashing. Following riders and the odd motorcyclist reckoned they could spot me at 200, maybe 250 metres, dropping to 150 metres on a misty 6am blast.

There's no missing the 100-lumen Hyperflash, even in strong autumnal sunlight. Friends reckoned they spotted it at 300 metres (nearer 400 on overcast days and towards dusk). The distinctive, retina-tickling tempo has been a godsend when the mists unexpectedly drift across the fields.

Positioning it vertically has a small but palpable edge, especially at junctions, negotiating roundabouts and just performing turns in the road – particularly so when I've tethered it to my low-slung trailer. Though it has a smaller surface area than I'm usually comfortable with attaching to a trailer or tagalong, the daytime mode more than compensates, especially in such contexts.

Group ride is also a surprisingly good choice for these duties. That said, something like the Knog Cobber Mid Rear Light is a superior choice for nocturnal couplings, but a good deal dearer, too.

Back on a solo, the 10-lumen flashing is better than I was expecting and the numbers might suggest. It's assertive enough for town, in common with the Cateye Rapid Micro Rear LED, but a bit tame – or at least I felt less conspicuous – on faster sections of unlit road.

Bargain on being visible at 125 metres (about the length of a football field) on a clear night, dipping to 80 when it's cloudy.

The 15-lumen steady is up to the job of built-up areas; I seemed to register on friends' radars at 70-80 metres.

Ours has proved very faithful to the cited run-times in temperatures between 7 and 15°C.

I've only just cruised past the 50-hour mark with the 10-lumen flashing – it's laughably frugal and shows no sign of faltering. In the other three modes, auto kick-down (to flashing) strikes when reserves hit 10%.

Charging times are similarly faithful: 3 hours from a laptop, 15 minutes faster at the mains. That's longer than some, especially those using USB-C, but on a par with other, such as the Sigma Blaze. Plugged into a dynamo USB it's a bit more variable, but has gone from zero to hero in just over 4 hours.

Minor niggles aside, the specification and performance are favourable and the price is good, although there's still a fair bit of competition.

Oxford's Ultratorch Slimline R50 Rear LED doesn't have a daylight running mode and the insert is less robust than some, but at £17.99 it's a good bit cheaper.

Topeak's Redlite Mega Rear Light comes in at £26.99 – slightly more but very bright and it runs from replaceable batteries, which might lack the outright convenience of a rechargeable but can be a godsend if you're on a long ride, and replacement AAAs are cheap and widely available. Just don't lose the casing screw.

Magicshine's Seemee 100 is also a little more at £28.99, offers seven modes (three steady, four flashing), a braking mode that can be switched on and off, and also meets IPX6 for weatherproofing.

The Cateye Viz 100 is a good rear light that covers most bases well. The only thing that merits some revision, to my mind, is the strap.

Cateye says "Cateye: 100 lumens of affordable power and runtime in a lightweight compact body. Compact, bright, and versatile, the all new ViZ100 rear bicycles light stands out with great visibility from the OptiCube™ lens technology and Daytime Hyperflash™ mode in an economical package. A fully featured rear light, the ViZ100 (Which replaces the previous best selling Rapid Mini), comes with 4 settings including a group ride mode and flashing mode which gives an impressive 70 hours of runtime. The innovative new Snap System™ bracket is simple to fit and place on your preferred position on the bike. The ViZ 100 with its 100 lumen high power makes this the ultimate rear bike light to give you confidence wherever or whenever you ride."

Battery Auto Save (The mode automatically changes to flashing when the battery power gets low.)

Allows riders to place rear lights on various locations in both horizontal and vertical orientations.

Provides 300° visibility from the side to increase safety.

Alerts when remaining battery gets low.

Can be used in the daytime.

Can be used in rainy weather.

Feels reassuringly solid and has stood up to some torrential downpours without missing a beat.

Simple to use, even wearing winter-weight full-finger gloves.

Quite versatile; no issues with standard seatposts and box section type tubing. However, I found the ladder-type strap fiddlier than others.

IPX4 is fairly basic on paper, but in practice I've had no issues, even through some torrential rain.

Very practical for most contexts. To date, run-times are within a few minutes of those cited and the same goes for charging.

I haven't spotted any obvious weak spots while testing, so with basic care there's no reason to think it won't serve riders well.

At 46g it's heavier than some, but nothing I'd lose any sleep over.

Specification and performance are favourable, although there's still a fair bit of competition around this price point.

There are brighter models and some better sealed from the elements, but the switch is user-friendly and the choice of settings are assertive and yet very practical. The 10-lumen flash is a little underpowered for darker, faster sections, but elsewhere, quite eye-catching. Run-times have been within a few minutes of those cited, the Hyperflash is extremely potent and the 10-lumen flash, super frugal.

Good selection of modes that are appropriate for most riding contexts, favourable run-times and charge-times.

I found the ladder-type strap fiddlier than some. A minor niggle rather than a dislike, really.

It's a decent price, but there's a fair bit of competition, as I've mentioned in the main review.

It's a good light that covers most bases, though I'm not completely sold on the strap.