9
10
With its amazing side visibility and all-round versatility there aren't many lights at this price that can shade the Cerberus
Weight:
35g
Contact:
www.raleigh.co.uk
How we test

The Moon Cerberus has a three-sided COB (chip on board) design that supplies outstanding side visibility, an innovative hinge system that makes it compatible with all shapes of seatpost, and a dimmer function that allows you to fine-tune your output and battery life.

Side visibility is an afterthought for most light manufacturers, but the Moon Cerberus supplies genuine 270-degree coverage and is as bright from the left or right as it is from the rear. Instead of a curved lens or cutout that is supposed to spread the light from rear-facing LEDs sideways, the Cerberus has three separate LED strips with two of them dedicated to sideways light. For those heart-in-mouth moments when you're passing a junction that's full of dozy drivers ready to SMIDSY you, it's game changing.

Unlike other manufacturers, Moon has sensibly kept the mode count to five, sparing the endless scrolling that some require. There are two constants and three flashing, including a retina-searing day flash, my favourite.

The constant modes are a claimed 3:30 and 1:45 but these can be stretched to 18 hours using the VLS button (variable lumen system), which is basically a dimmer switch to preserve battery life or spare your riding mates' eyes. VLS can also be applied to the flashing modes.

The buttons are more like pressure pads, flush with the casing, and are not easily operated with gloves on. The VLS button sits right next to the on/off so ideally you need to be looking at them, meaning you perform any lumen-fettling while stationary. 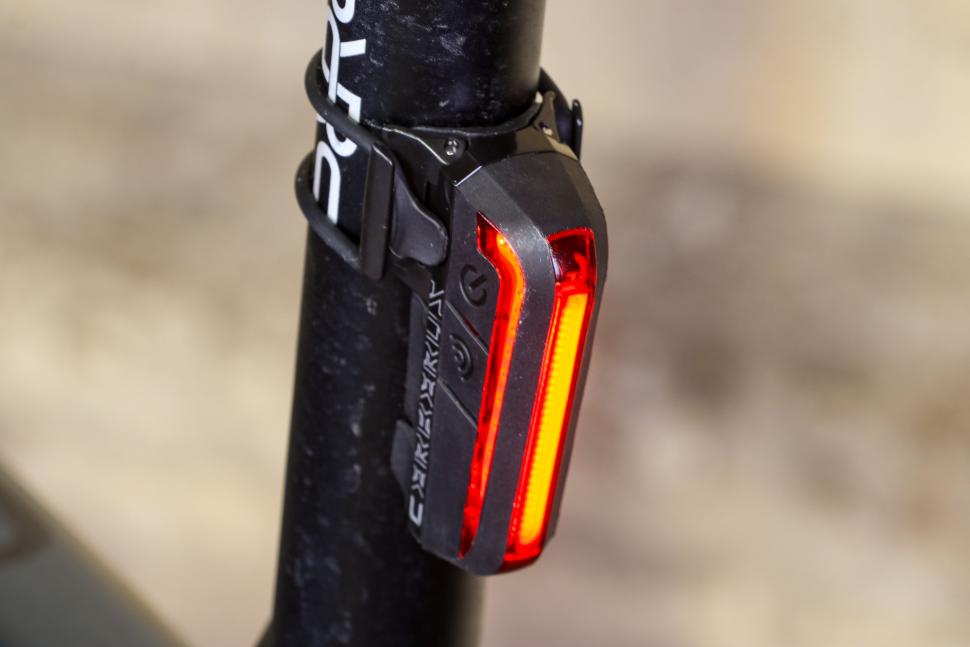 And unlike most lights, the Cerberus is not just designed for a round-profile seatpost. The clamp has a clever system whereby two hinged wings and a flexible rubber pad make it fit both round-section and the sharpest bladed seatposts. You choose from three supplied rubber bands in the box to get the right fit, but any rubber band will do, such as the ones that come with Garmin stem mounts.

The rubber pad that sits against the seatpost conceals and waterproofs the USB port and does a good job: the force of the rubber band squeezing it to the seatpost ensures it's always tightly plugging the USB port. It's a shame it's removable, though, because in a house with children, any interesting-looking thing like that tends to disappear never to be seen again.

Charging is with a USB-C cable, which is not the same as the micro USB that most devices use. Moon says USB-C is the new generation and is more convenient with better charging performance, but at the moment it's not very convenient to have to use a specific cable – even though charging is quick at two hours.

For what it is and what it does, the Moon Cerberus is very good value. The Lezyne Strip Drive 150  costs the same and has the same lumen count, but lacks the side visibility feature and the bladed seatpost compatibility. The Knog Cobber Mid does supply coverage at the sides with its curved design and goes up to 170 lumens but costs £59.99, and with its gap between light and seatpost will not be as aerodynamic.

With its genuine 270-degree visibility, compatibility with aero seatposts, powerful output (especially impressive is the retina-searing day flash), extendable run-times, aerodynamic shape and low weight there aren't many lights that can shade the Moon Cerberus at this price point. I predict it will be particularly popular with time triallists now that rear lights in CTT time trials are compulsory as of 1st January 2020. It misses a perfect 10 because of the rubber bung that can be easily lost and the USB-C cable it uses.

Moon Sport's website says: "What is Cerberus? Your side guardian. Reduce the risk of collision from the rear side and the rear end. Get extra visible angles and become more eye catching while passing thru an interaction (sic), side street, alley and driveway. The 3 direction tail light makes you brightly exposed to the rear LEFT, rear END and rear RIGHT."

This is a really nicely made light with a good-quality look and feel.

The on/off button and the VLS (variable lumen system) button are next to each other and are not actually buttons – rather pressure pads that are flush with the casing. This is probably good for aerodynamics but makes it difficult to operate these with thick gloves on when stationary and impossible on the fly. However, since you would need to be looking backwards for seconds at a time while the VLS dims or brightens, I am guessing it is not meant to be operated on the fly.

You switch between constant and flashing modes (two and three respectively of these) by double-clicking the on/off button, which again is not feasible with winter gloves on and even without gloves has to be done when stationary.

Operation of the modes is intuitive enough and it's nice that Moon has kept it simple with just five in total.

Holding down the variable lumen system button allows you to turn up or turn down the brightness of any of the five modes and is a nice idea.

The clamp has a clever system whereby two hinged wings make it fit both round-section and bladed seatposts. You choose from three supplied rubber bands in the box to get the right fit, but any rubber band will do, such as the ones that come with Garmin stem mounts.

There's a removable rubber pad at the rear that sits against the seatpost. This conceals and waterproofs the USB port and does a good job, but it's a shame it's removable, because removable in my house means easily lost.

Good waterproofing design. The rubber bung is forced into the USB port when the light is clamped to the bike. It stood up to the elements well and the USB port stayed dry.

It has to get a perfect 10 for this. With the VLS (variable lumen system) you can almost make it run forever (a claimed 140 hours, which I can't claim to have verified), and charging is two hours as advertised. It's just a shame that it uses a USB-C cable, which Moon says is the new generation of USB for more convenient and better charging performance. Since all other devices use micro USB at the moment that makes it highly inconvenient if you lose the cable.

Rate the light for performance:
10/10

The 270° cob design is truly excellent. Every cyclist gets terrified passing a T junction at night, wondering if dozy drivers have seen them. The LEDs on the side of the Cerberus are as bright as the one on the rear so chances of being seen are massively improved.

The day flash is really blinding and is my favourite. Being able to dim the constant for group riding is pretty handy too – but has to be done stationary and not on the fly.

It seems tough and durable. The hinge system is robust enough and the rubber pad has not degraded at all a month in.

Since the casing is plastic it's light as you can expect – lighter than the metal-cased Exposure lights, for example.

Very good value for its brightness, run-time and versatile design. The Lezyne Strip Drive 150 costs the same, has the same lumen count but lacks the side visibility feature and the bladed seatpost compatibility. The Knog Cobber Mid does supply coverage at the sides with its curved design and goes up to 170 lumens but costs £59.99. For what it is and what it does, the Moon Cerberus is great value.

As a night light and a daytime running light it is excellent, especially the day flash, which uses the full 150 lumens.

I love the 'COB' shape that gives extra side visibility with dedicated left and right LEDs. I haven't used a light before that does this so well. The hinged wings that make it fit different types of seatposts are great: with its aero shape it would make a great daytime running light for time trials, in which rear lights are now compulsory.

I worry about losing the removable rubber pad/bung that has to be taken off for charging, and it's a shame it uses a different type of USB cable from all my other devices.

Although I've complained about how I might lose the rubber bung or the USB-C cable, I am giving the Moon Cerberus a score of 'Exceptional' because the amazing side visibility it supplies is so much more important. I also predict it will be a popular light with time triallists because of its aero shape and the ease with which it fits a bladed seatpost, not to mention the retina-searing day flash mode.