Back to REVIEWS
review
Seatposts

9
10
Adds a good dollop of seated comfort without much weight penalty, but it's really pricey
Weight:
239g
Contact:
www.canyon.com

Canyon's VCLS 2.0 seatpost is its second attempt at designing vertical compliance into a seatpost, following on from the more conventional VCLS post. It uses an ingenious leaf-spring arrangement to give a more comfortable ride, a much more noticeable improvement than on most other "comfort-enhancing" seatposts. It weighs more than a conventional carbon post, but not that much more. It comes as standard on a raft of Canyon's bikes, but you can also buy it aftermarket, if your pockets are deep enough. The VCLS 2.0 isn't a new product, but as we've tested a range of comfort-oriented seatposts lately, it would be remiss not to include this popular option.

There's a reason why the basic design of a bicycle is unchanged in over 100 years – the triangulated frame is a very efficient way of giving the required strength to hold your weight. It's incredible, if you think about it, that a frame weighing sometimes as little as 700g can support a rider weighing over 100 times that. The advent of road bikes designed to offer more comfort for longer rides has given us things like super-skinny seatstays, but there's no getting away from the fact that the triangle is not naturally a yielding shape, in structural terms.

The seatpost is a different matter – engineers describe it as a cantilevered beam – so it is attached at one end, and the rider's weight bends it. All seatposts bend under load, but some bend a lot more than others. The VCLS 2.0 post uses a unique (well, almost – see below) design to bend much more than other seatposts. Rather than a single round tube, it consists of two semi-circular sections bolted together at the bottom, which part towards the top and join separately to the clamp mechanism. These joints pivot, so the theory is that the saddle remains horizontal (or at whatever angle you set it) as the seatpost flexes. 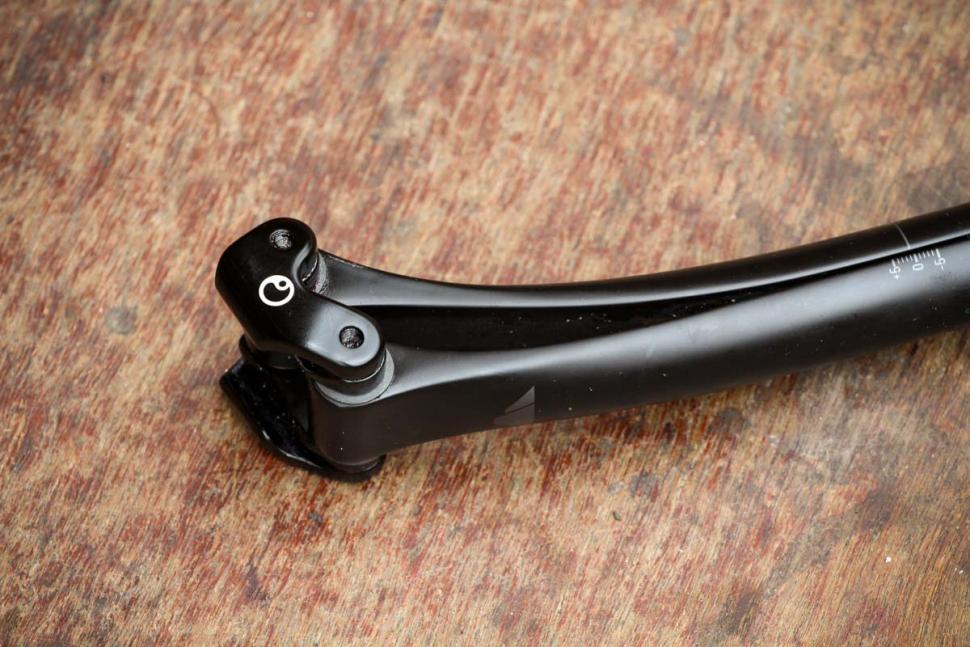 You might be looking at this and thinking "that looks stiffer than just a regular post! What were you saying about triangles earlier?" but the reason why it flexes more is the same reason that a leaf spring is made out of layers rather than a solid lump of metal. The two halves can move relative to each other, which isn't possible (obviously) with a single tube. Canyon says that the VCLS 2.0 post can deflect by 20mm at the top. That is significantly more than other conventional seatposts, and this is the first "comfort" seatpost I've ridden where the effect is immediately noticeable, rather than something you have to concentrate to detect.

The VCLS 2.0 seatpost makes a real, noticeable difference to your seated comfort on a bike; 20mm might not sound like a lot, but think about it as the difference between 25mm and 45mm tyres. On towpaths and gravelly byways, I frequently found I could remain seated where previously I'd have stood to pedal. The effect is emphasised by the difference between what your bum feels and what's being transmitted to your hands and feet. Your other contact points still get rattled, but your bum gets a definite upgrade in terms of comfort. Of course, Canyon has a solution if you also want to make your hands more comfortable...

I've heard some criticism levelled at the VCLS 2.0 for its effect on pedalling. If you have an up-and-down pedalling style, you might find your torso bounces up and down a bit with it. A good excuse to practise a smoother style, I suggest.

Let's talk about fitting. The process is a little different to every other seatpost out there, as the angle of the saddle is not set at the clamp. Instead, it is set by altering the relative vertical position of the two halves of the seatpost. 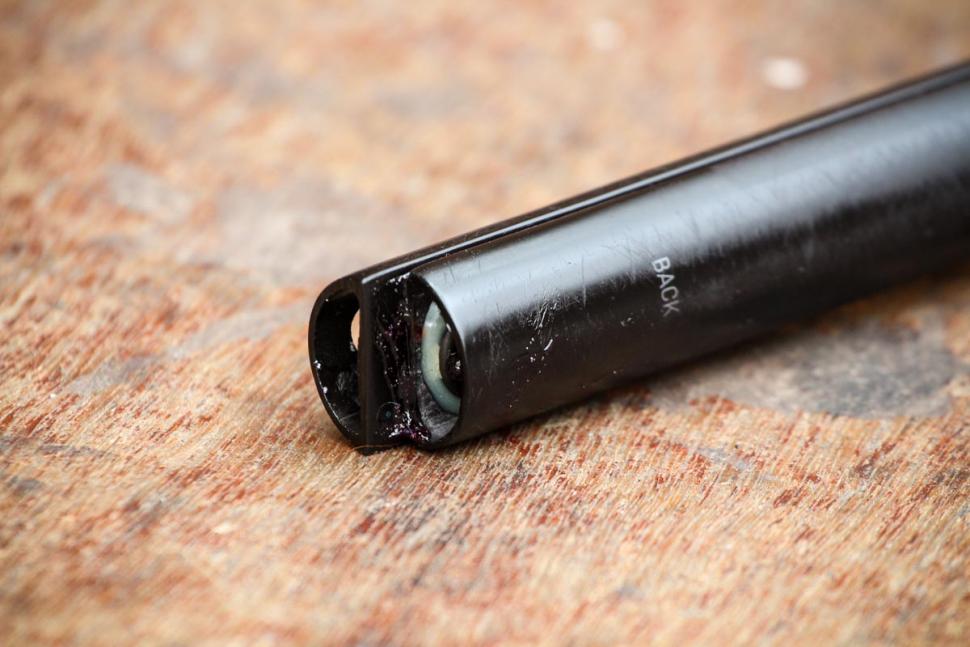 As I mentioned above, these are held together at the bottom by a single bolt. If you want to change the angle of your saddle, you need to remove the seatpost entirely from the frame and loosen this bolt, and then slide the two halves relative to each other. There's a small scale on the side which helps for future reference once you've found your ideal angle. Once it's set and the bolt is tightened, you won't need to adjust it again. 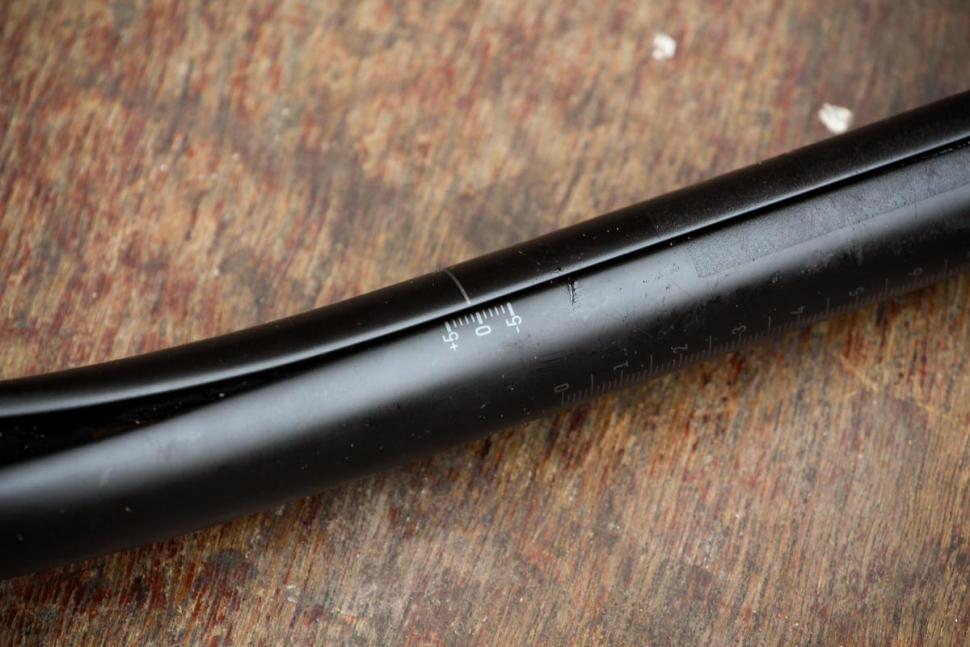 The user manual suggests setting the saddle height 5mm higher than normal due to the flex in the seatpost – this seemed about right in my experience. Canyon supplies a sachet of carbon grip paste which you need to spread between the two halves of the post as well as in the usual places (on the outside where it goes into the frame, and on the clamp surfaces).

The saddle rails are clamped side-to-side rather than top-to-bottom, and if your saddle has oval rails you'll need to get hold of the matching clamps. You can flip the clamp front-to-rear to gain an additional 12mm of fore-aft adjustment. 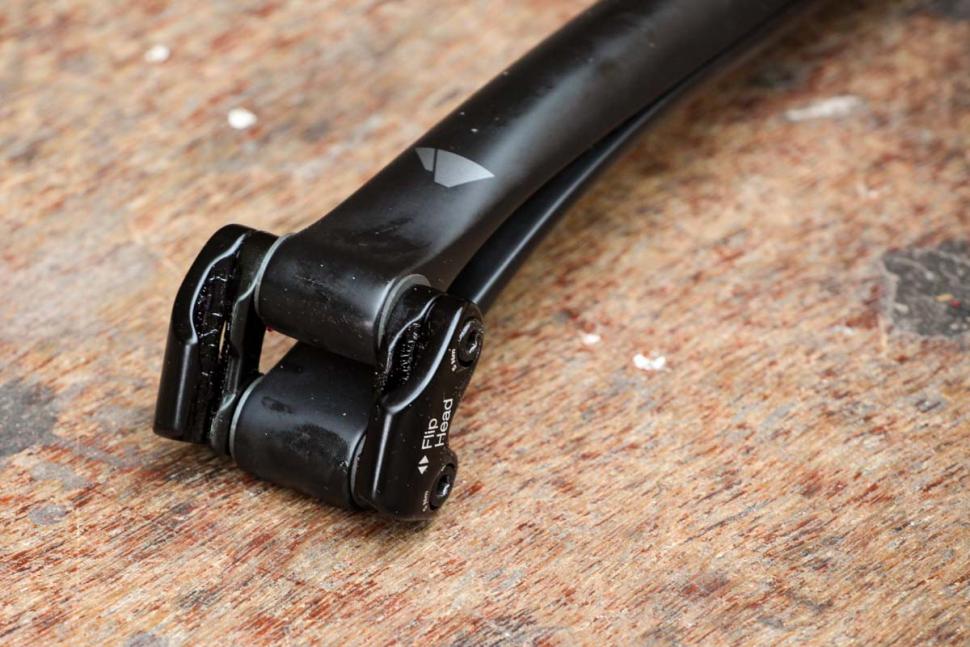 It's worth pointing out that Canyon offers the VCLS 2.0 post in a choice of setbacks. I was testing the S15 version, which offers 13-25mm of setback, and the straight model (S14) gives 2-10mm of setback. Canyon told me that the curved S15 offers slightly more compliance (although both have a claimed 20mm of flex). If you've had a bike-fit then you'll know which suits your setup better, otherwise if your existing position suits you, just choose the version which is closest to what you have.

One point which literally didn't occur to me until I set out to fit this to my road bike: it's not immediately compatible with current-gen Shimano Di2, which locates the battery inside the seatpost. If your seatpost is split in two, then you can't put a battery inside it. That being said, I'm sure it's possible to lash something up where, instead, you just drop the battery further down inside the seat tube, and indeed Canyon offers a Di2-equipped Endurace with the VCLS 2.0 seatpost, so it can't be an insurmountable challenge.

There are other seatposts on the market which tout improvements to comfort. I recently tested the Ritchey Flexlogic post, which offered a much smaller improvement to comfort. At the other extreme is the venerable Thudbuster from Cane Creek, which offers significant cushioning at the price of a hefty weight penalty. Specialized's CG-R post is a little cheaper than the Canyon and offers a similar claimed range of movement. A new option this year is the eeSilk from Cane Creek, which is an elastomer-sprung linkage seatpost like a Thudbuster, but at a much more roadie-palatable weight point. We've not tested this yet, but it looks like a plausible rival to the Canyon in terms of range-of-motion and – ahem – cost.

There are two more rivals to this seatpost which I haven't yet mentioned. Firstly, the Ergon CF3. This is essentially the exact same product (the bosses of Canyon and Ergon are brothers, apparently), and was previously sold at a lower price point, although it's currently hard to find in UK shops. Second – a new bike. Take the Trek Domane, for example. It has a raft of very clever technology built in to battle the inherent rigidity of the two-triangle bike frame design. Dave found that this worked brilliantly to add comfort both at the saddle and the handlebar. Not really a rival product, of course, but the point I'm making is that a £227 seatpost could be worth trying before concluding you need to buy a whole new comfort-enhancing bike for rather more.

I was really impressed with the Canyon S15 VCLS 2.0 seatpost. Sure, it is very expensive, but it offers a clear improvement to seated comfort for a pretty paltry weight penalty.

Adds a good dollop of seated comfort without much weight penalty, but it's really pricey

Canyon says, "The S15 VCLS Seatpost achieves an ideal combination of lightweight construction, compliance, durability and torsional stiffness. This seatpost features a curved shape design and offers 13 to 25 mm of saddle setback - and it's easily adjustable thanks to the Flip Head. The floating seat clamp allows for the saddle tilt angle to remain constant when flexing. Riders can customize the saddle tilt by simply sliding each leaf spring up or down."

Construction provides up to 20 mm travel

Clever design offers significant compliance without adding a lot of weight or bulk.

No issues in testing, and Canyon has shipped a lot of these out now. Provided you're under the weight limit, you should have no problem.

Rate the product for weight (if applicable)
10/10

Either quite heavy for a carbon seatpost or very light for a compliant seatpost. I'll go with the latter, as you'd be buying this with an eye on comfort rather than for outright weight-saving.

Compared with other "compliant" carbon seatposts, this is a game changer. Offering up to a claimed 20mm of "travel", it adds an immediately noticeable quantity of give to the seat of your bike.

This is one of the more expensive seatposts on the market, but it is offering something genuinely different to other lower-priced alternatives. It's expensive for a seatpost, but if your bike isn't comfy enough and you're thinking about upgrading, it's likely a lot cheaper than a new bike.

Very well. The first comfy seatpost I've tried where you didn't have to concentrate to notice the difference.

You can stay seated over terrain where you otherwise would habitually stand.

Initial installation is a bit slower than with a traditional post; not easily compatible with Shimano Di2.

Compared with other "comfort" seatposts I've tried, this is the first that offers an immediately noticeable improvement. To do so with only a fairly minor weight penalty is really impressive. Only the "how much?!" price really counts against it. I suspect that 95 per cent of these that Canyon ships are fitted to its bikes. 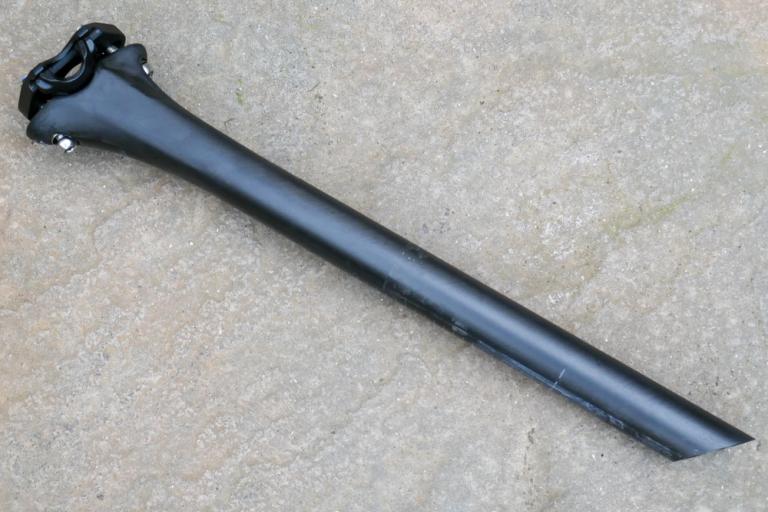 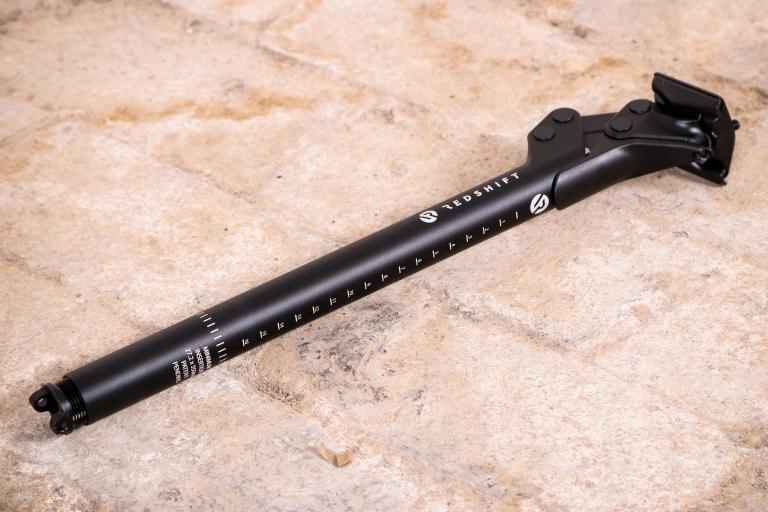 Heavy, but easy to adjust and gives a smooth suspension action you can set to your own personal taste 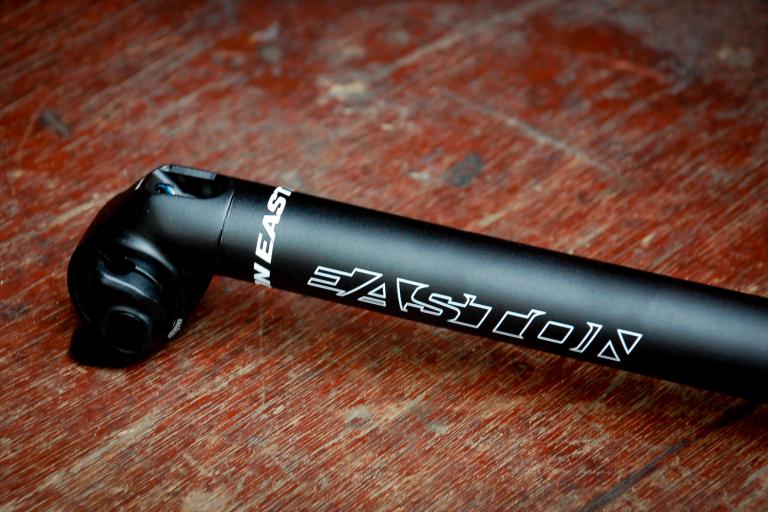 An excellent clamping system is the highlight, though it's a rather pricey post 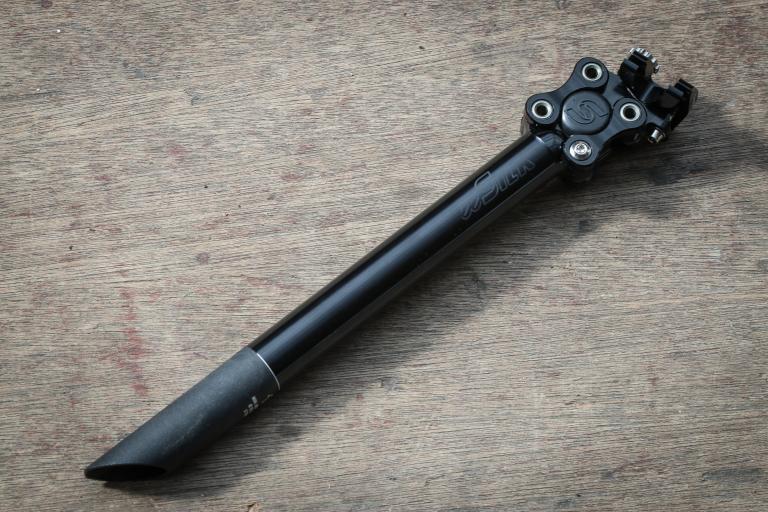