All the stuff you never knew you needed from the world's biggest bike show...
by dave atkinson

We’re long back from the Eurobike show in Germany not, and the sausage hangover has more or less abated. We haven’t managed to tell you about all the cool stuff we saw, though, so hold tight for another rummage through the halls…

Gravel bikes are a big thing these days, in case you’ve been living under a rock for the past couple of years; every stand at Eurobike had one. What  riding /actually/ is depends on where you’re riding, but the bikes are excellent all-purpose machines for all kinds of uses from potholed country lanes to the fire-road wildernesses of the less-populated bits of Britain.

Gravel bikes have bigger tyres for more grip and comfort on mixed surfaces. Sometimes that’s not enough, and there’s been plenty of experimentation with front suspension from the likes of Lauf and Fox. And a bit of bounce at the rear wouldn’t go amiss sometimes either. One of the easiest ways to achieve that is with a suspension seatpost.

I’ve been using my Cane Creek Thudbuster seatpost on my gravel bike for a while now (including for the 200k Dirty Reiver) and it’s excellent, helping to soak up bumps without affecting pedalling efficiency too much. It doesn’t really suit sleek carbon gravel bikes though – especially mine, which is nearly 20 years old and bolted together with bits from the ironmonger’s – so Cane Creek has brought a new version of the Thudbuster to market for the gravel crowd. 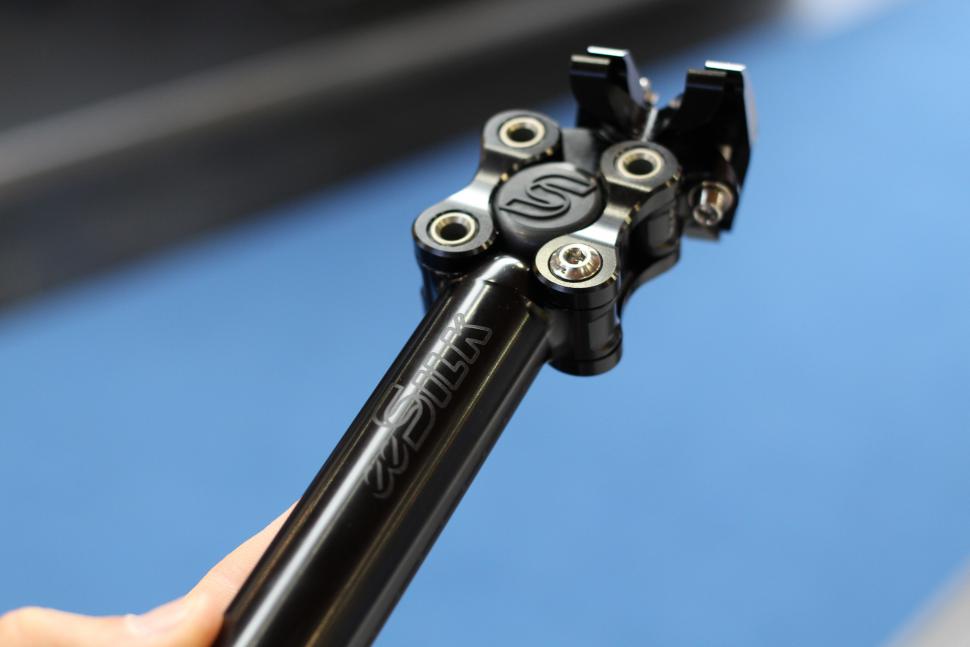 Actually, it’s not a Thudbuster: Cane Creek has launched the ‘post under its high-end ee sub-brand. It’s called the ee Silk, and it offers 20mm of elastomer-damped travel to tame the bumps. 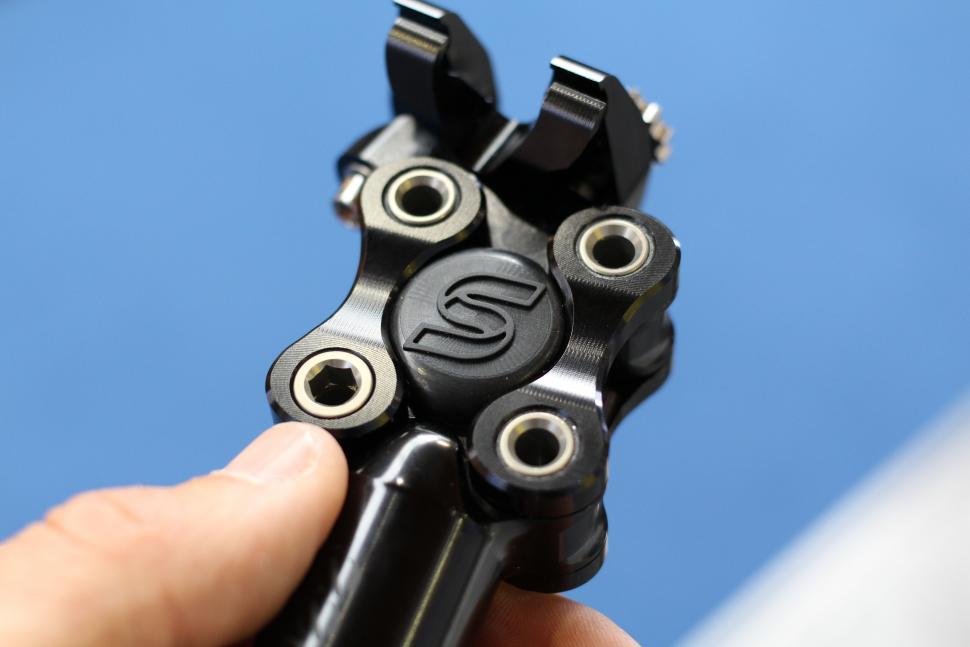 So it’s a shorter-travel seatpost than the Thudbusters, and it’s a lot lighter. The forged and machined construction, along with the alloy pivots and titanium hardware, gives a weight of 295g. That’s some 150g lighter than the short travel Thudbuster and only 50g heavier than a Thompson alloy seatpost, so it’s not really adding much to your bike’s overall weight. It’s not a lightweight build in terms of durability, though, with a weight limit of a massive 150kg. There are 5 different elastomers available to tune the ride. Cane Creek told us that when set up correctly the ee Silk should only move when it hits a bump, and there should be no pedal-induced bob at all.

The seatpost should be available to buy from later in the month. We’ll be chatting to UK distributor Extra to see if we can get one in for testing.

Another thing that’s been finding its way onto gravel bikes is the dropper ‘post. Droppers generally use an air spring that allows you to move the saddle up and down over a set range. Mostly you drop the ‘post for more technical descents where you need to get your weight low and over the back of the bike, and raise it for the more pedally bits. 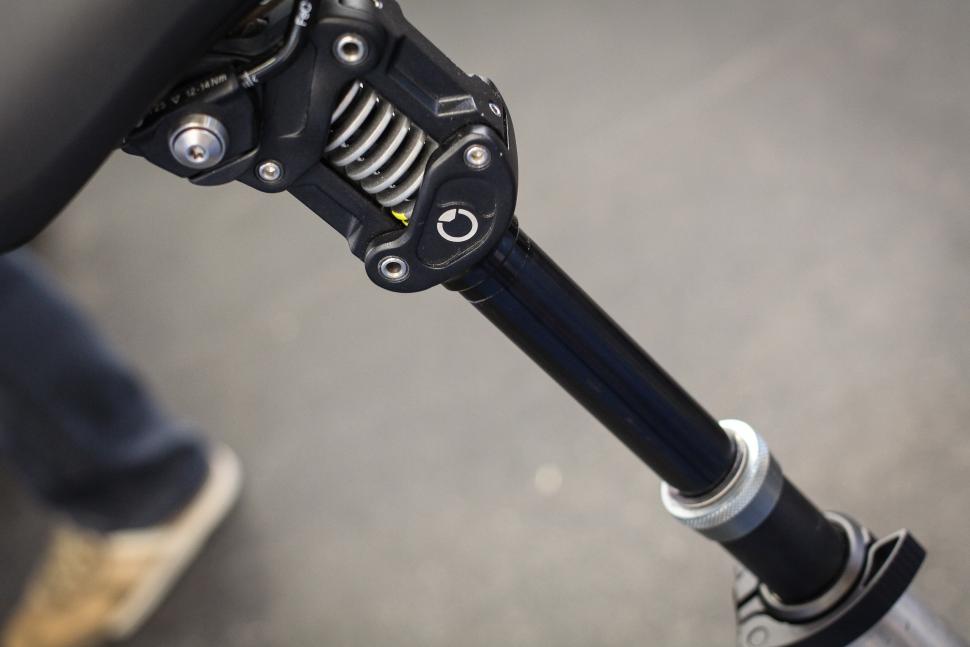 German component manufacturer by.schulz has decided that there are times when it’d be handy to have both a dropper ‘post and a suspension seatpost, and it has combined the two into one ‘post to rule them all. The by.schulz ‘post will be available next year, and it offers 30mm of suspension travel and a 120mm drop. 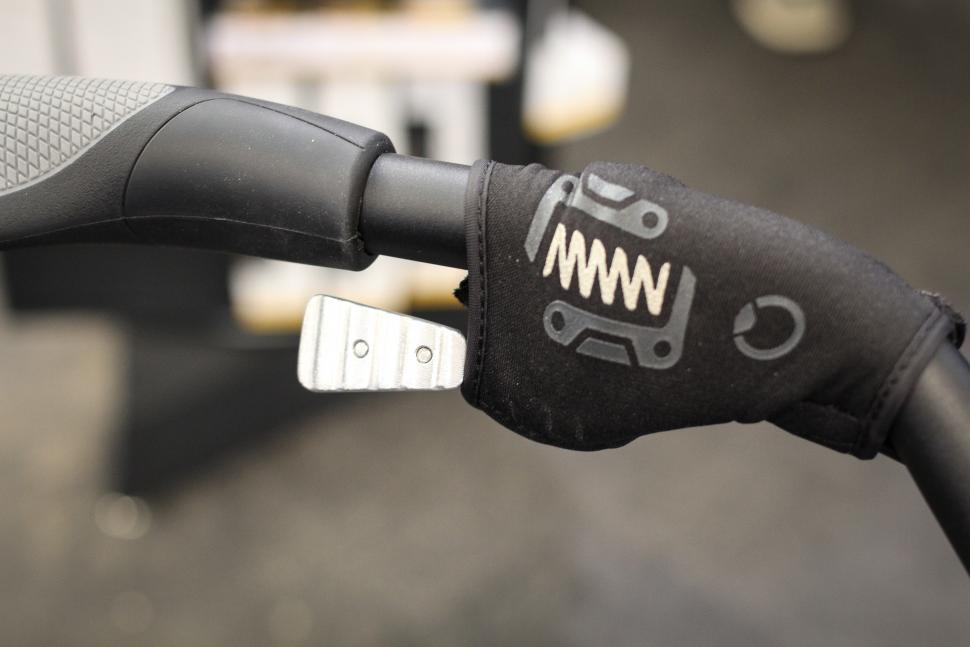 It’s activated by a remote on the handlebars (this is still very much in prototype), and there will be options to route the remote cable either internally or externally. It won’t be cheap – €400 was the ballpark figure we were quoted – and it probably won’t be that light either. But it might be just the thing for your bikepacking rig if you’re throwing in some more technical riding. 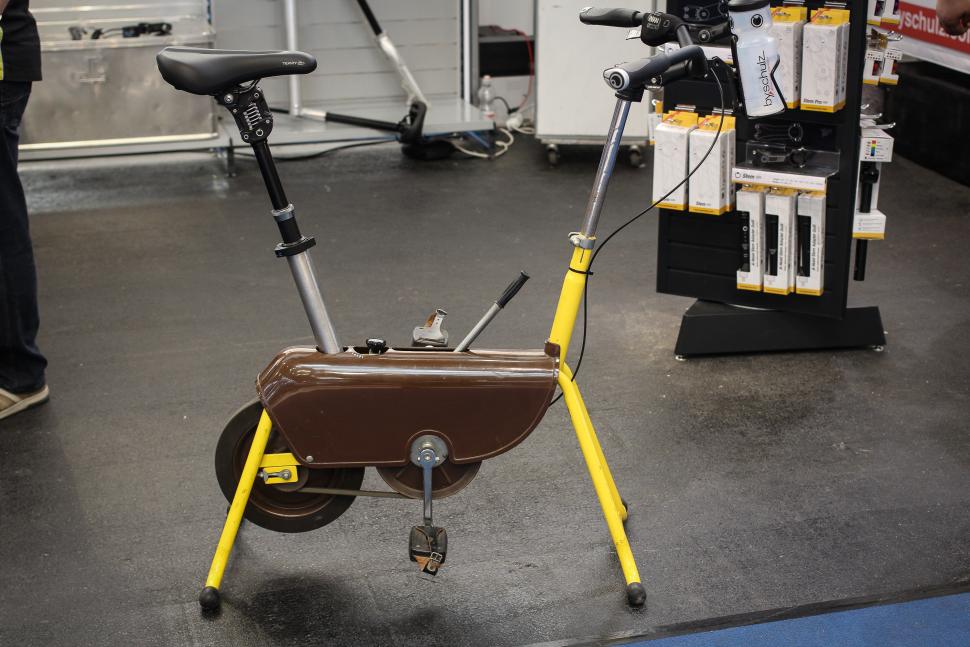 Also, they had it displayed on this super retro exercise bike, which was ace. Apparently plenty of people came up and asked if they were releasing it as a product... Can’t decide between a folding bike and an aero road bike? Well now you don’t have to! Okay, it’s not technically a folding bike, but this aero carbon frame from Java has a demountable rear coupling and the whole rear end folds in, using the bottom bracket as a pivot. The threaded BB holds everything together. 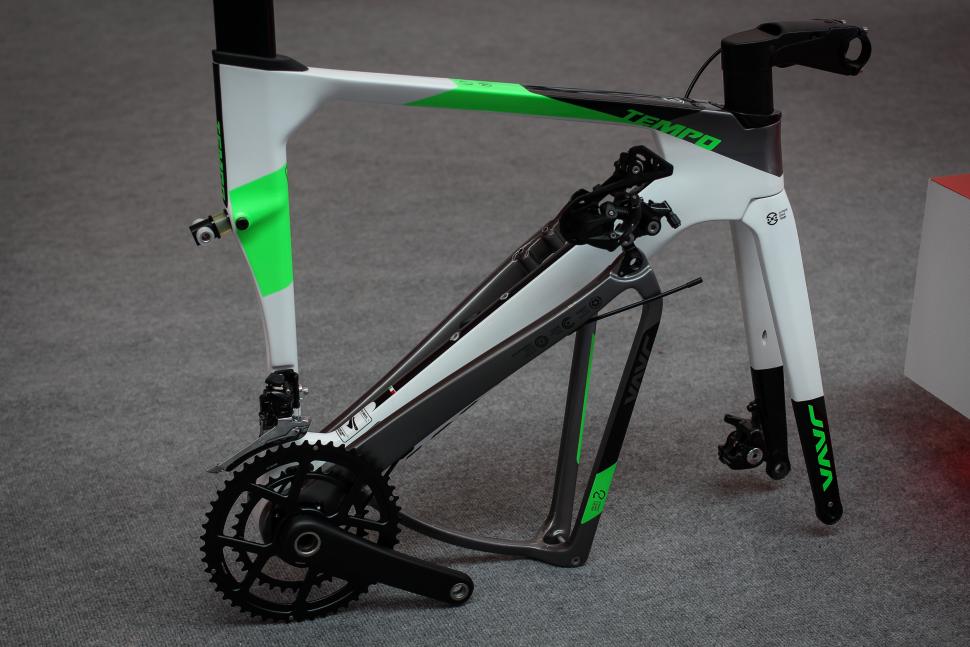 In the rear end there’s a small elastomer which is available in soft, medium and hard to tune the small amount of rear wheel travel to the rider. The bike is currently in testing, but the company is hoping to release it next year, in three frame sizes. Will we ever see it in the UK? Who knows! But it was an interesting design. 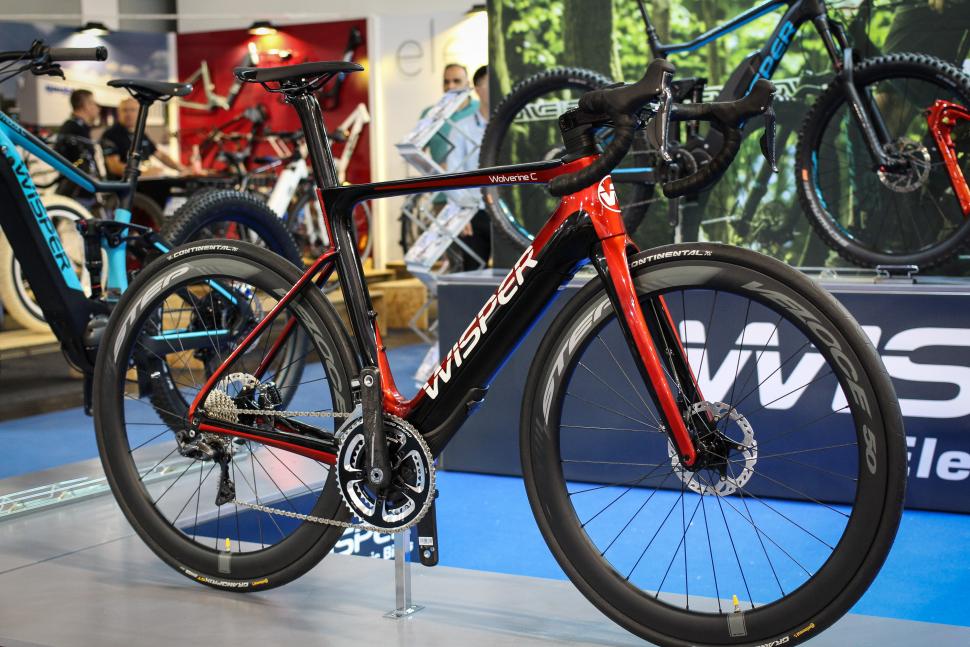 Next we’ll move on to e-road bikes. We’ve already told you about the Wisper Wolverine Carbon over on ebiketips, and we definitely will see that in the UK. Now we’ve seen it in the flesh we can confirm that it’s a very nice looking bike indeed. The integration with the Fazua Evation motor is neat, as it is on nearly all bikes that use the system, but the whole bike feels very clean and well considered. Wisper has gone to great lengths to hide the cables, routing everything internally through a special spacer stack into the head tube, and the bike is beautifully finished too in a deep gloss metallic red. It’s a very nice looking thing indeed. 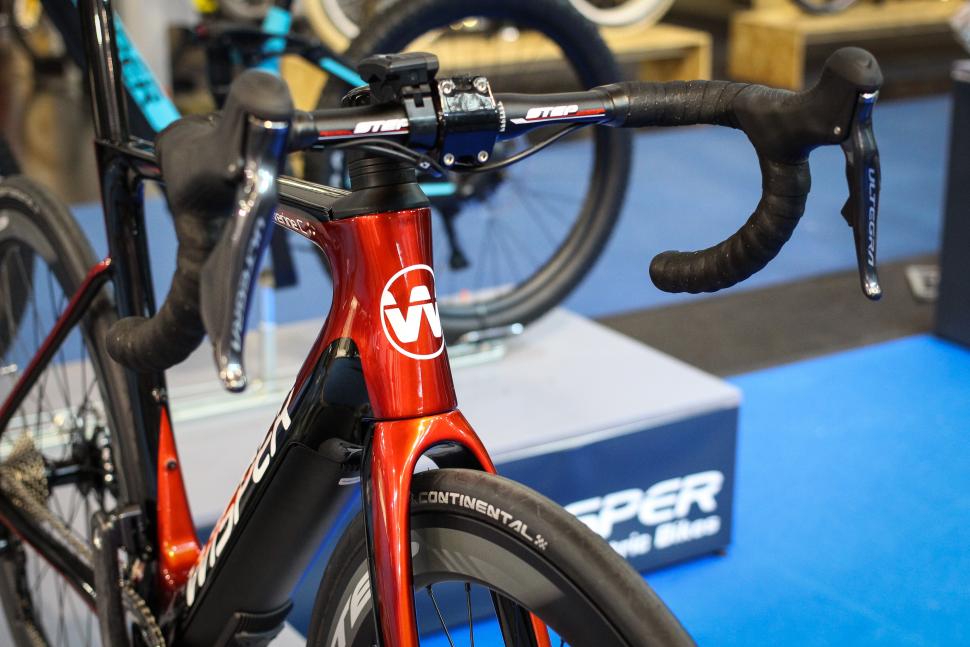 Unusually for e-bikes, Wisper offers the Wolverine Carbon as a frameset, so you can build it up with your preferred kit. We say frameset; the kit includes the frame, motor, battery, fork, headset, stem, seatpost and carbon cranks. That lot will cost you £3,850, and the list price for the full bike, with Shimano Ultegra and 50mm carbon wheels, is £5,800. 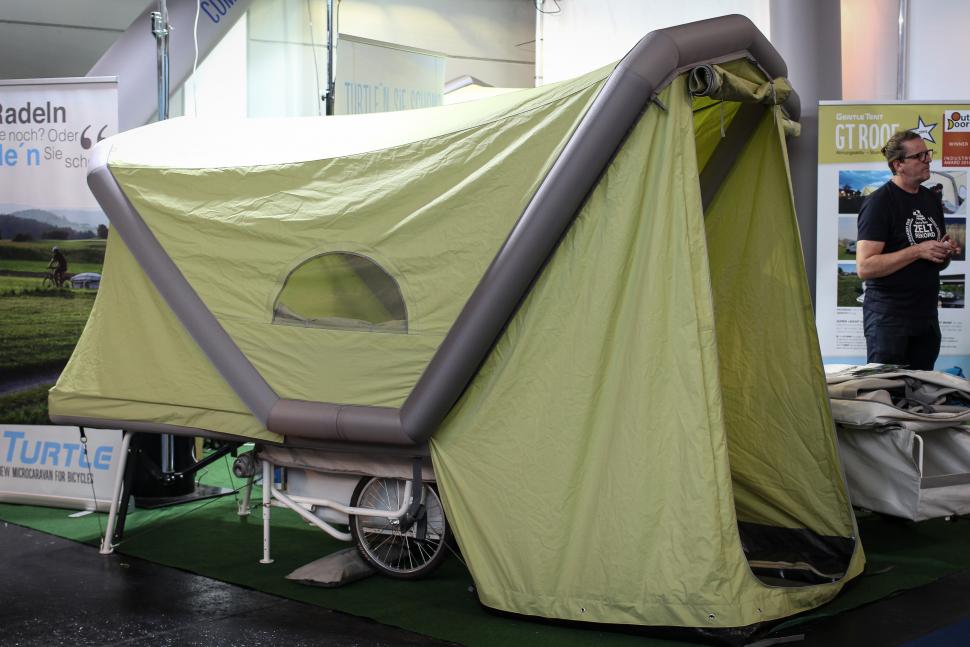 If you’re into a bit of touring on your bike, then why not do it in style? The B-Turtle from Gentle Tent – Okay, we guess it looks a bit like a turtle – is described as a caravan, but really it’s an inflatable trailer tent. The bed base of the tent sits on top of the trailer so you’re off the floor; it’s inflatable and constructed from the same drop stitch material as a stand-up paddleboard, so it has plenty of rigidity. The tent canopy uses the increasingly popular inflatable poles, and the whole thing sleeps two in comfort with a bed base that’s 1.3m x 2.1m in size. There’s a porch area on the floor, too, and you can store stuff under the trailer; if you do, it’s directly accessible from the tent through an access flap as well as being protected from the elements by the bed base. The trailer weighs 30kg, so it’s probably more one for e-bike touring than if you’re pulling all the weight yourself. You can buy the B-Turtle direct from Gentle Tent and the price is €2,990: more than a tent, but a lot less than a caravan… 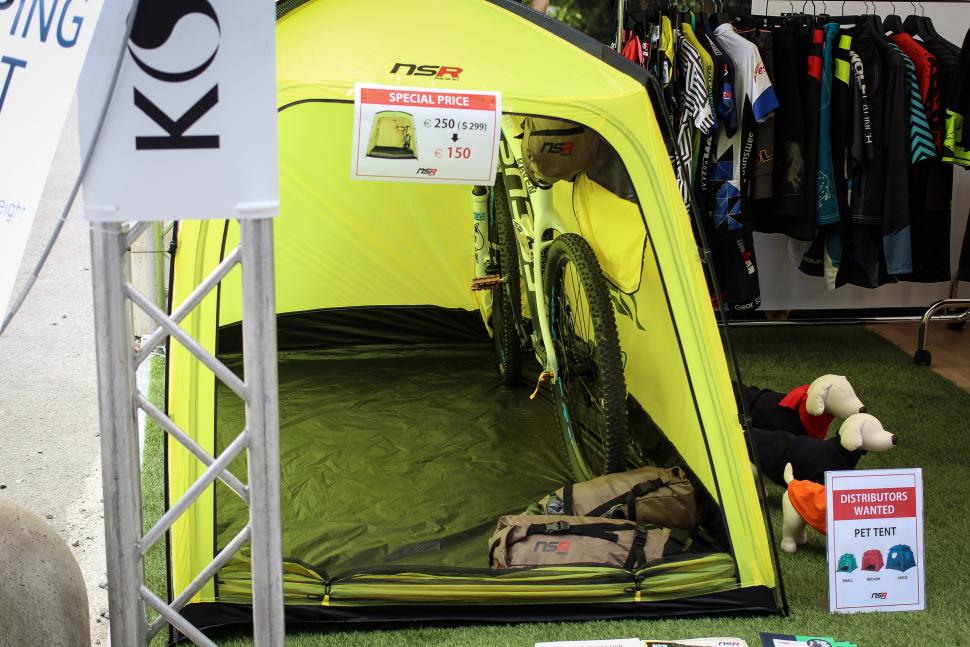 If 30kg is a bit too much for you to lug about, how about this Bikepacking tent from NSR that weighs just 1.8kg? The unique selling point here is that the tent is designed to accomodate your bike as well as your person, so it doesn’t get nicked while you’re asleep. 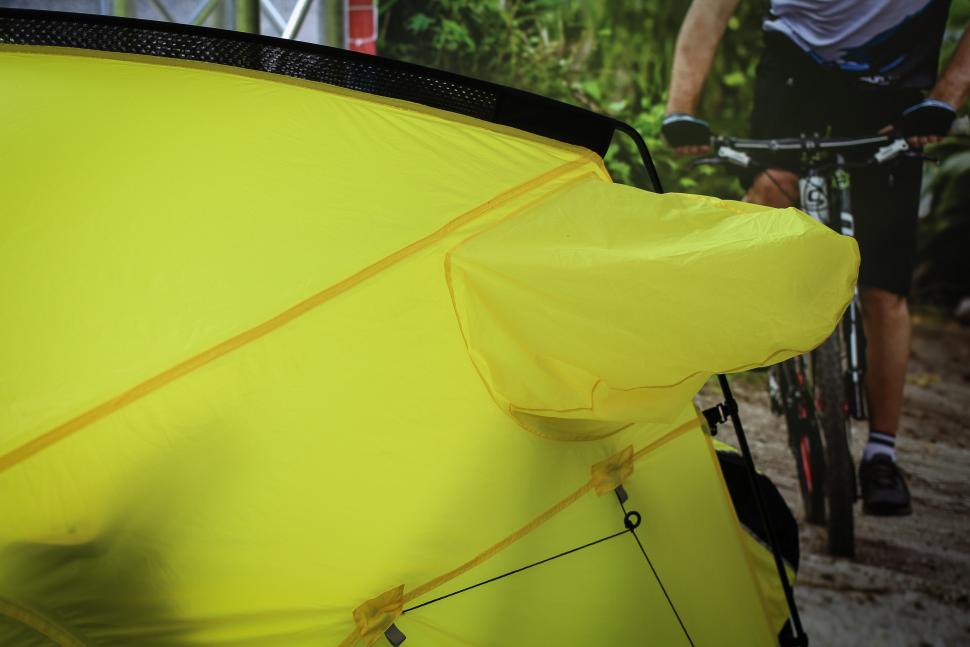 The tent is a single skin construction and it has pockets to accommodate your wheel and your handlebars, so they sort of poke out of the side, but inside, if you know what I mean. There’s separate versions for road bikes and mountain bikes, with the bulges in the correct places. If you’re worried about losing your bike when you’re dozing, then it looks like a well-thought-out bit of kit.

We're still not done! stay tuned for more from Eurobike over the next week...